Copies of the spring 2019 edition of Western Carolina University Magazine are now available for faculty and staff pickup at two locations on campus – Hunter Library and H.F. Robinson Administration Building.

Effective with the winter 2018 edition, the Office of Communications and Public Relations no longer distributes individual copies of the print version of the magazine to faculty and staff in an effort to reduce expenses.

University magazine distribution points are the foyer of Hunter Library and the front desk area of the Office of Communications and Public Relations, located in Suite 420 of H.F. Robinson Building.

The magazine also is available online at magazine.wcu.edu, where readers have access to the same stories that are in the print edition, along with extra online content including videos, photo galleries and more in-depth coverage.

The current edition of the magazine features a cover-story profile of Western Carolina University’s first African-American student, a woman whose name will be affixed to WCU’s newest residence hall, which is currently under construction.

The issue also recognizes a WCU professor whose record of sustained and superb achievement on behalf of people with intellectual disabilities has earned him one of the University of North Carolina System’s top honors; helps celebrate the 50th anniversary of WCU’s School of Nursing; details how one couple’s ongoing financial contributions are transforming the Honors College and the lives of its students; and shares the accomplishments of a multitude of WCU alumni. 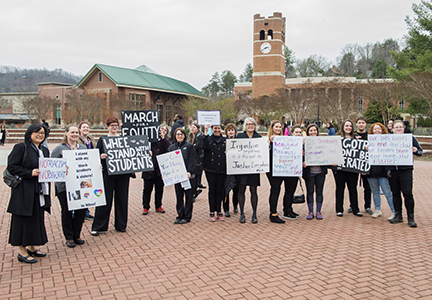