The lack of broadband internet access in rural areas of Western North Carolina and the quest to find long-term employees for outdoor recreation-related businesses were a couple of the challenging issues highlighted as Western Carolina University hosted its inaugural Outdoor Economy Conference on Friday, Oct. 5.

More than 250 leaders and professionals representing the outdoor recreation industry in the region gathered at WCU’s A.K. Hinds University Center for the event, which provided participants an opportunity to explore topics such as branding, gear design and land management, and to hear stories from successful business owners and learn about resources available to help them thrive.

WCU Interim Chancellor Alison Morrison-Shetlar welcomed the attendees and said they and their colleagues “are building one of the most important economies in our state – the outdoor economy.”

“This is a great group of folks who represent private companies, nonprofits, higher education and government,” Morrison-Shetlar said. “Western Carolina University shares a common mission with many of you; that is, to promote the outdoor economy. We call it an economy instead of industry because it is an ecosystem of partnering industries like health and wellness, craft beverages and tourism, as well as summer camps, design, manufacturing, retail and outfitting.”

The recently released Outdoor Industry Association’s Outdoor Economy Report indicates that outdoor recreation in the U.S. generates $887 billion in annual consumer spending and directly supports 7.6 million American jobs, and that translates down to $19 billion in retail spending and 192,000 jobs in North Carolina.

As part of WCU’s activities in regional economic development, the university’s faculty, staff and students work with outdoor companies through capstone projects, internships and research, Morrison-Shetlar said. “Over the last two years, our College of Engineering and Technology, College of Business and Rapid Center have partnered on projects with the outdoor industry including manufacturing, retail, design and adventure companies involving nearly 100 students,” she said.

David Knight, outdoor industry recruitment director for the N.C. Department of Commerce, spoke to the group about the functions of the newly established N.C. Outdoor Recreation Industry Office. Knight said his job entails not just recruiting new businesses to the state, but also supporting existing businesses. “It’s an exciting time to be an advocate for outdoor recreation,” he said.

Since being named to the position nine months ago, Knight has conducted a “listening tour” around the state to find out what’s on the minds of the stakeholders involved in the outdoor recreation industry. He said some of the concerns he heard most often involve the lack of year-round lodging, directional signage for outdoor recreation sites in rural areas, more broadband and cell phone coverage, funding for start-up businesses, marketing, workforce development, seasonality issues that make it hard for businesses to operate year-round, and public access to natural attractions.

Conference discussions focused on gear design and manufacturing, workforce development, raising capital to start a business, marketing and stewardship of public lands. One panel discussion provided an opportunity for a trio of entrepreneurs to talk about the challenges they face in operating outdoor-related businesses.

Cory McCall, co-owner of Outdoor 76, a full-service store with locations in Franklin, Cherokee and Clayton, Georgia, graduated from WCU with a degree in hospitality and tourism in 2004. McCall said the internet is one of the biggest challenges for his business.

“We’re a retail location, and every single day I have someone who comes in and says, ‘I can find this cheaper on the internet.’ And the truth is, you can,” he said. “So, how do you combat that? The one thing we’ve preached to our employees is that we have to bridge that gap. We have to show someone why they want to do business with us. Part of that has to do with customer experience. That means, when someone comes in the door we say ‘hey’ to them, we greet and acknowledge them, and we ask them what their needs are.”

McCall said one advantage his stores have over internet competition is that he and his employees can tell customers why one product will work better than another for them as individuals. “If I can’t do that, then I’ve been defeated by the internet,” he said.

Juliet Jacobsen Kastorff, co-owner of Endless River Adventures, a company located in Nantahala Gorge that offers whitewater rafting and other activities, spoke about another internet-related challenge. Kastorff, who is working on her master’s in English at WCU, said she previously believed that an outfitter offering the best staff, nicest facilities and best equipment, and with a commitment to customer service, would be “turning people away at the door.”

“One night, I was in the office late, which is certainly not unusual, and I was booking an airplane ticket,” she said. “I knew where I wanted to go and the days and time I wanted to go, and I was searching for the least expensive flight. And, all of a sudden, I thought about it and was like, ‘Huh, this is how people choose a rafting trip.’ With the internet these days, that’s the reality of it. So, a huge challenge for us is how do you differentiate yourself when everybody has a website that says they’re the best?”

Jeff Greiner, president and co-owner of Nantahala Gorge Canopy Tours, said finding employees who are attracted to the lifestyle involved in outdoor-related business and committed to a high level of quality can be difficult. As a business owner, “You’ve got to set the culture of your company very early on because you’re going to live with that culture for the rest of your career,” he said.

Working in the industry has its perks, Greiner said. “What’s really the most impactful and keeps me excited are the stories and experiences that we are able to provide,” he said, relaying to the audience that he enjoys visiting the home or office of a customer and seeing a photograph of that person taking part in one of the activities his business offers. He also spoke about hosting a third-grade girl who is blind for a zipline ride. “She had the biggest smile on her face,” he said. “She loved it and can’t stop talking about it. She’s a student at my wife’s school. It was just awesome to be part of that.”

The conference keynote address was presented by Peter Ripmaster, an ultramarathoner from Asheville who won the running division of the 1,000-mile Iditarod Trail Invitational in Alaska last March. It was Ripmaster’s third try at the race, which follows the historic Iditarod Trail from Knik Lake to Nome and is regarded as the longest and toughest winter ultramarathon in the world. It takes place one week before the famous Iditarod Sled Dog Race. His winning time was 26 days, 13 hours and 44 minutes, and he averaged covering 38 miles per day. 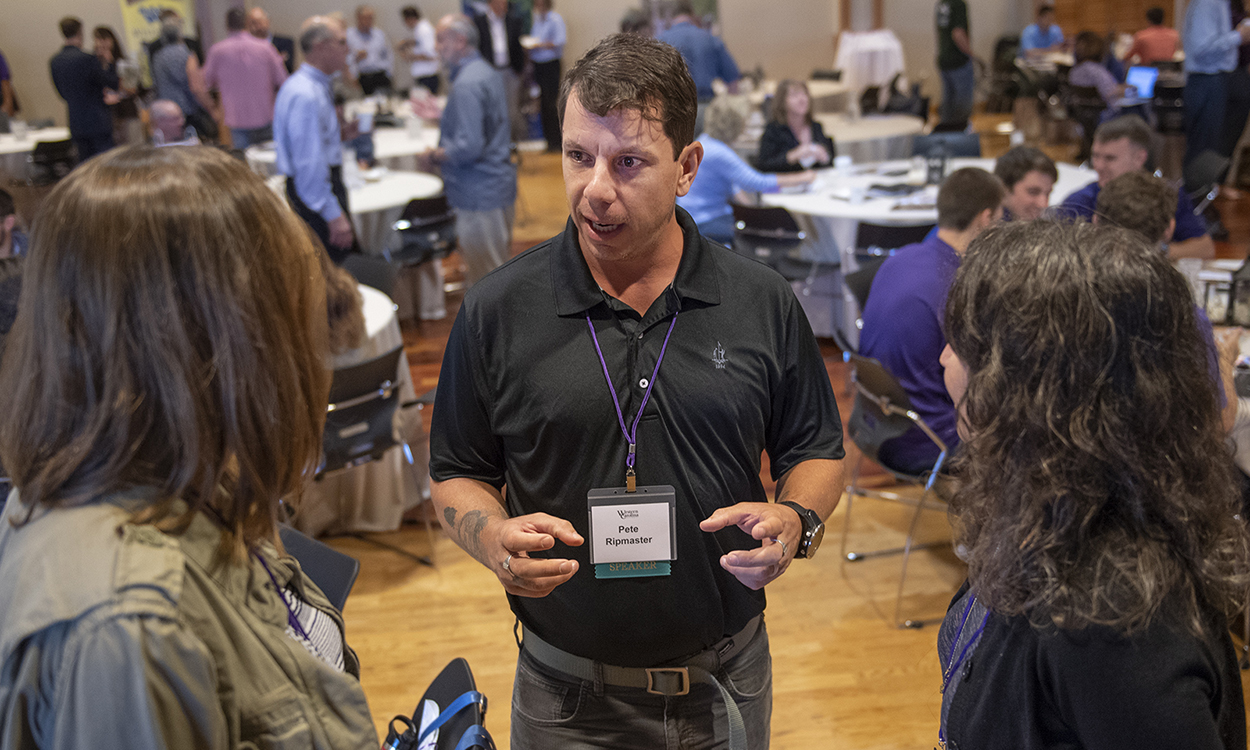 Ripmaster first attempted the 1,000-mile version of the race in 2016 and nearly died in a partially frozen river, and last year he stopped after 350 miles. After relaying to the conference audience the struggles he endured at this year’s event, Ripmaster showed them a photo of himself taken at the 990-mile mark.

“If you could have seen a close-up, I was smiling and I was crying,” he said. “I was thinking about all the previous years and all that brought me to this moment.”

When he crossed the finish line as the Iditarod running champion, Ripmaster was handed a handmade coffee mug. “The guy that won the sled dog race, he got $75,000, a $75,000 Dodge truck and sponsors lining up to have him work with them. I got a T-shirt, a finisher’s mug and a hat,” he said.

Ripmaster said his weight dropped from 205 to 169 pounds during the event. “I was sick as a dog, but I had won the race and accomplished a childhood dream,” he said.

The conference was organized by a committee of WCU faculty and staff members, and plans already are in the works for the second annual Outdoor Economy Conference next October, said Arthur Salido, the university’s executive director of community and economic engagement and innovation.

Of the 250 registrants for the Oct. 5 conference, 50 represented small businesses and 60 represented support organizations, nonprofits and economic development offices. They came from about 40 cities and towns in three states, Salido said. “All of us on the organizing committee are extremely pleased with the attendance and the feedback we are hearing,” he said.

For information about participation in next year’s event, contact Salido at 828-227-2587 or salido@wcu.edu.