ABC News' John Quiñones speaks about journey out of poverty, value of vulnerability 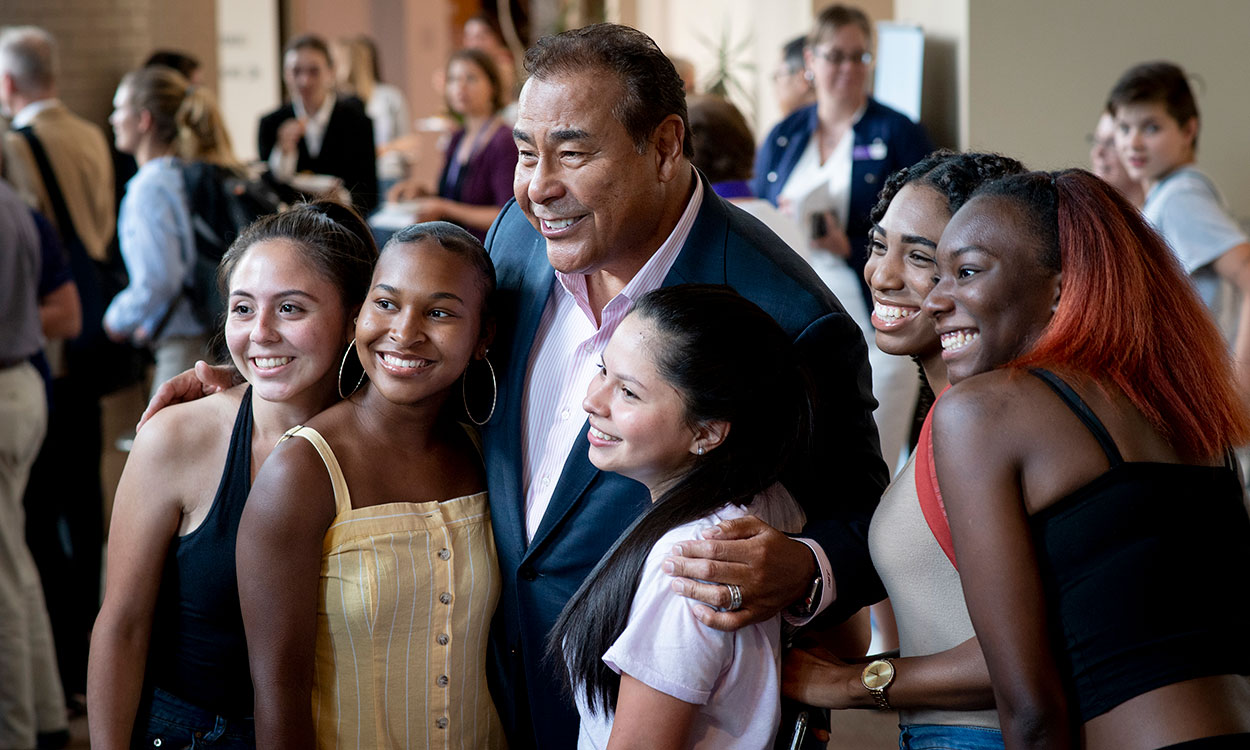 Veteran ABC News correspondent John Quiñones urged Western Carolina University’s highest-achieving students to create opportunities in their lives by being “a little vulnerable” and spoke about his long, hard ascension from a childhood in poverty as he delivered keynote remarks for the fall semester chancellor’s list ceremony Tuesday (Sept. 10).

When he was 13, Quiñones and his family were forced by dire economic circumstances to join migrant farm work crews “following the crops” from Michigan to Ohio, but years later he achieved his longtime dream of becoming a TV news reporter, starting out at a Chicago station, where he earned his first Emmy Award, and then at ABC News in New York.

He visited the WCU campus to speak to students being recognized for stellar academic performances that led to them being included on the university’s chancellor’s list for spring semester 2019, a designation requiring a GPA of 3.8 or better. The event in the performance hall of John W. Bardo Fine and Performing Arts Center also was attended by the students’ faculty and staff mentors, as well as by family and friends.

A total of 1,681 WCU students were named to the chancellor’s list last spring. In his remarks, Quiñones congratulated the students on their accomplishments, telling them, “I know it’s taken a tremendous amount of perseverance, dedication and hard work.”

Quiñones, who also hosts the popular ABC show “What Would You Do?,” said he came to WCU wanting to remind the students that “much of the success or failure in our lives is psychological – so much of it is in your head.”

“It sounds almost too simple to be true. But, the first step, I think, in overcoming the odds and leaping over barriers and obstacles is reminding ourselves that it can be done, despite the odds, despite what other people tell us. You’ve just got to ignore the naysayers, and that takes being bold, being brave,” he said. 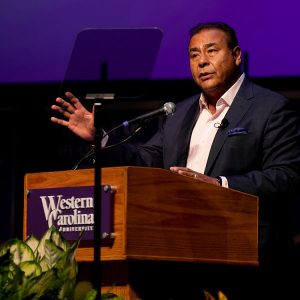 Quiñones speaks to the ceremony audience in the Bardo Arts Center performance hall.

To achieve their dreams, the students must allow themselves to be vulnerable “because vulnerability is the birthplace of really important stuff, like empathy, innovation, creativity,” Quiñones said. “Sure, when you make yourself vulnerable you might stumble, you might be criticized, you might be embarrassed, you might even be hurt. But, when all is said and done, when we step back and examine our lives, we find that nothing…nothing is as uncomfortable, dangerous, embarrassing or hurtful as standing on the outside of our lives looking in and wondering what it would have been like if only we had had the courage to step in the arena.

“As a young man, I never wanted to look back and regret anything, and that’s what kept me climbing, pushing, shoving my way all the way to ABC News. It wasn’t easy, especially considering where I came from.”

Quiñones then spoke to the audience about some of the pivotal moments in his childhood and career. He was born into a family that has lived in what is now Texas for seven generations, but he “couldn’t speak a word of English” when he started public school as a 6-year-old in San Antonio. At 12, he had already set a goal for himself of becoming a TV news reporter, but was discouraged by teachers from pursuing that dream. But then, the influence of one particular 10th-grade English teacher led to him working for the school newspaper, and participation in the federal government’s Upward Bound program gave him a chance to spend part of the summer for six years learning and growing on a local college campus.

Eventually, at 18, Quiñones was introduced to the general manager of the local country radio station, and he became an intern there making $2 per hour. The station disc jockeys kept horses behind the studio, he said, and his first duty was feeding the horses and cleaning up their manure. But, at night, he could go into the station studio and work on his broadcasting voice with the recording equipment.

Quiñones, who earned his bachelor’s degree in speech communications at a university in San Antonio, said at one point he was almost ready to give up his dream of a TV news career, but a friend recommended he apply to the prestigious Columbia Journalism School to earn his master’s degree. Ironically, a fellowship provided through NBC News made it possible for him to do that, and he later went on to his first job as a news reporter for a TV station in Chicago. One of his reports for that station, which involved going undercover and posing as an undocumented worker crossing the Rio Grande from Mexico and working at a restaurant in Chicago, won an Emmy, and Quiñones was hired by ABC News in June 1982.

He became a general assignment correspondent based in Miami, providing reports for “World News Tonight with Peter Jennings” and other ABC News broadcasts. He spent nearly a decade reporting from Nicaragua, El Salvador, Guatemala, Honduras and Panama, and his work for ABC includes time on the anchor desk of “20/20” and “Primetime.” In “What Would You Do?,” which first aired in 2008, Quiñones and his team use hidden cameras to examine how people react in situations that prompt them to intervene, or mind their own business. He has been the recipient of a total of seven Emmy Awards for his work.

Quiñones’ visit to campus and the ceremony were organized by the Office of Student Transitions.

“Students who have earned this prestigious award – that’s you – are role models as university citizens, having demonstrated your commitment to academic and personal excellence,” she said. “You understand that while it is important to excel in the classroom, it is equally important to engage with your community, on campus and in the region, and to make a difference in the lives of those around you.

“It is with great pride that I say to each of the students here tonight – congratulations.”

The ceremony was followed by a reception for the students and their families and friends. 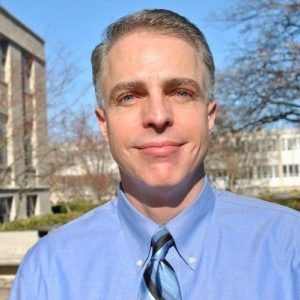 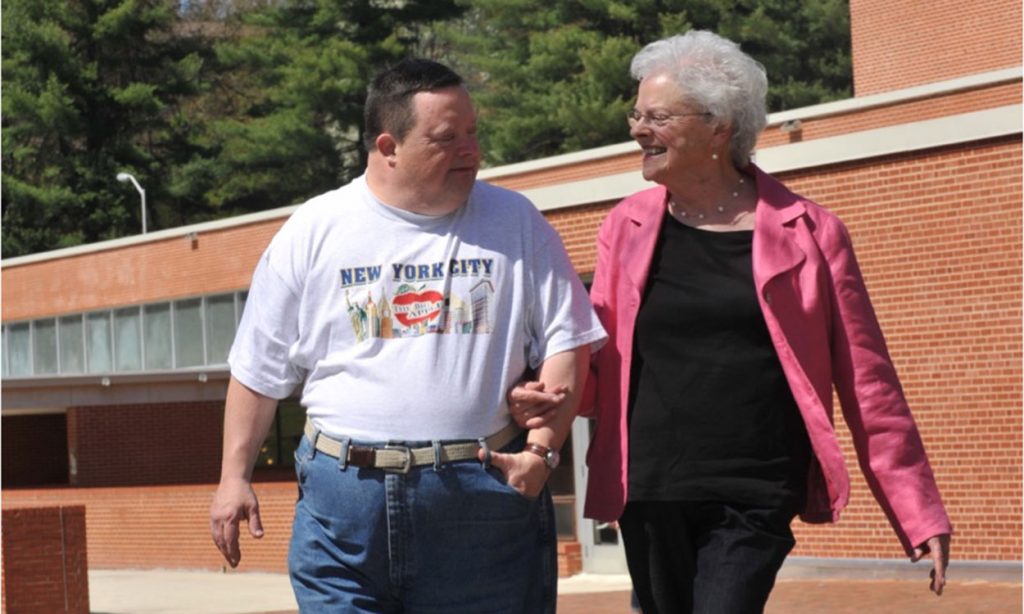