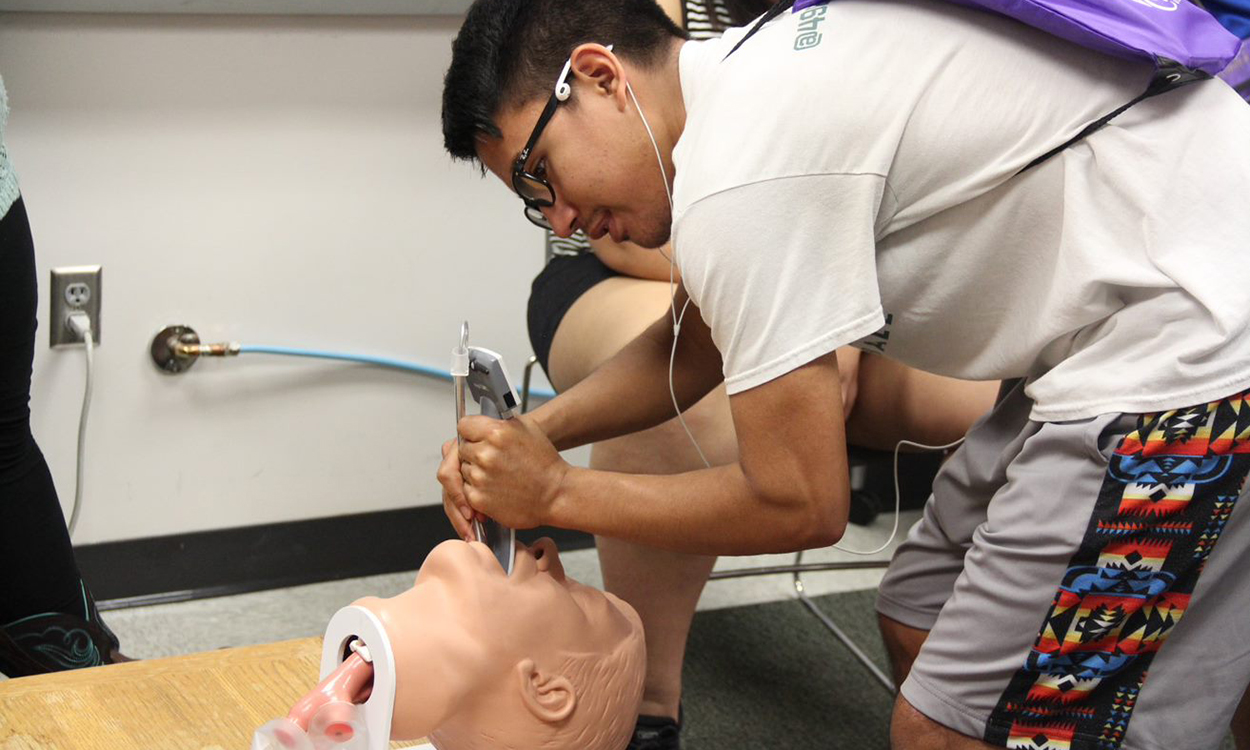 Cherokee youth Nate Crowe takes part in a hands-on health sciences activity during the Judaculla Camp, a partnership between WCU and the Eastern Band of Cherokee Education and Training Program.

An event two years in the making, Western Carolina University and the Eastern Band of Cherokee Education and Training Program partnered this summer to host the first Judaculla Camp.

“The camp is named after a significant Cherokee legend and immortal being that roamed the mountains of Cullowhee at one time,” said Sky Sampson, director of WCU’s Cherokee Center. The weeklong camp, held June 18-22, was designed specifically for Eastern Band of Cherokee rising sophomores, juniors and seniors. “WCU pulled together many departments and collaborators to mark this amazing milestone between the EBCI and WCU communities,” Sampson said.

The group of 11 students had an opportunity to experience college life by living on campus and learning about the many career paths offered at WCU. Some of the topics included engineering, Cherokee studies, cultural diversity, archeology and health sciences. The students experienced hands on-learning and team building exercises that they could take with them after high school. The group also was able to meet with current EBCI students and EBCI alumni during the week, which allowed them to gain insight into college life.

“We want our EBCI students to find a connection at WCU,” Sampson said. “It is our responsibility to show these students all that WCU can offer them throughout their education and that WCU is striving to connect with our communities daily.”

“The Cherokee Center staff would like to thank the EBCI Education and Training staff, WCU’s Educational Outreach staff, EBCI alumni, current EBCI students and WCU higher administration for their efforts and support toward the planning and implementation of Judaculla Camp,” she said.

For more information about Judaculla Camp, contact Sampson at snsampson@wcu.edu or 828-497-7920.

Provost's Scholarship Development Award Q and A set for Sept. 13

WCU Board of Trustees to gather on campus for quarterly meeting