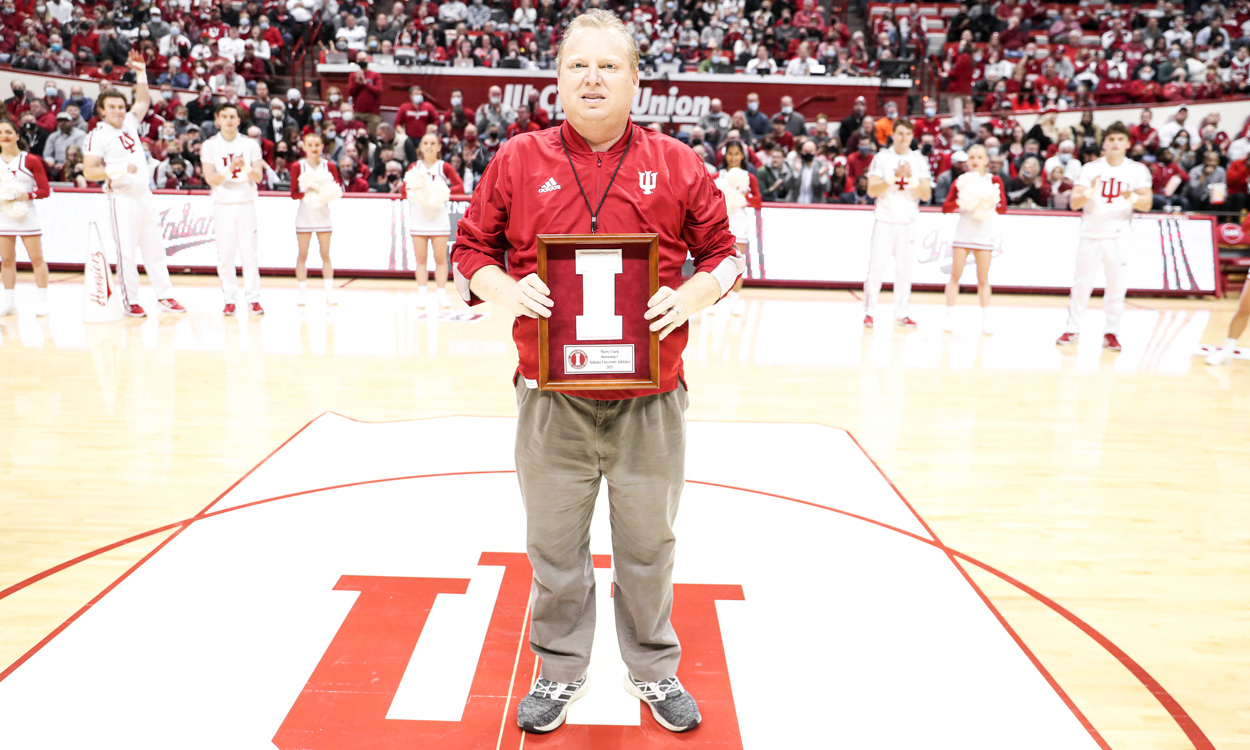 Marty Clark acknowledges the crowd after receiving an Honorary I from the Indiana University athletics department.

From Waynesville’s Tuscola High School to Western Carolina University and on to Indiana University with a few stops in between, Marty Clark has devoted a lot to football. Not as a player, not as a coach, but as an equipment manager.

In return, football has given a lot to him, too.

Since arriving at Indiana as a bright-eyed 23-year-old assistant in 1989, Clark worked his way up to become a senior assistant athletic director. Clark was awarded an Honorary I from Indiana’s athletic department in December 2021. “They’ve given it out 75 times. It’s the highest award that a non-letter winner can get,” he said.

“It meant a lot. The award itself is timeless. It’s something that…” Clark paused. “I’ve got stage four glioblastoma. It’s an award that my daughters can share or fight over,” he said with a light-hearted chuckle.

Glioblastoma is an aggressive form of brain cancer, the same type that claimed late WCU Chancellor David Belcher in 2018. Clark’s condition was diagnosed as terminal, and he underwent two rounds of surgery in November 2021. He said 70% of the tumor was removed with a first surgery and another 25% was removed during another operation.

Clark has received an outpouring of support from his family, friends and colleagues in the Athletic Equipment Managers Association and from the Hoosier community, including Scott Dolson, IU vice president and director of intercollegiate athletics.

“We know he’s in a tough fight right now, but no one is better equipped to face this than Marty. And as he does just that, he has not only his immediate family in his corner, but also his extended IU Athletics family as well,” Dolson wrote in a statement.

In February, members of AEMA voted for Clark to receive the Tony Anderson Memorial Award. The award is named for the man who gave Clark his start at Indiana and is given annually to the most outstanding equipment manager in AEMA’s District V, which covers Illinois, Indiana, Michigan, Minnesota, Ohio, Wisconsin and Ontario.

Clark first met Anderson in 1987 and the two hit it off, sharing their similar ideas on reconditioning shoulder pads. “Who knew that two years later in 1989 I would actually be working for him. Things come full circle, they really do,” Clark said.”

Like many others who’ve grown up around the passionate tradition of football in Haywood County, Clark loved the sport during his days at Tuscola and took great pride in being a Mountaineer. He graduated in 1984.

“To be a part of that program was everything. It didn’t matter if you were washing jocks and socks, it was absolutely everything,” Clark said. “You’re willing to do anything and everything for that program to be successful.”

Clark’s next stop gave him the chance to work for another coaching legend: Western Carolina’s Bob Waters.

“I remember coach Waters when he could actually hit a golf ball, and then obviously, later, he ended up in a wheelchair with Lou Gehrig’s disease,” Clark said, who graduated from WCU in 1989. “He had a lot of influence on a lot of people and it was an amazing ride, really.”

As a freshman, Clark made friends with football player Gary Wright, who helped him get in with assistant coach Steve Hodgin (who coincidentally started his coaching career at Tuscola). Hodgin allowed Clark to come on board as an equipment manager.

“That first year, I’m not going to say it was out of control, but it was a little nerve-racking to say the least,” Clark said. But he stuck with it, got the hang of it and, by his sophomore year, he knew he wanted to forge a career in equipment management.

Former Catamount head football coach Kent Briggs, then an assistant coach in the program, saw Clark’s potential even as a wet-behind-the-ears student manager. “Marty is not just a great person with a great personality, but he is tremendously hard-working. It was not a surprise to me at all that he wound up at Indiana University and worked his way up the ladder to finally become one of the head guys,” said Briggs, who visited Clark in Indiana a few years ago. “It was amazing to see how everyone up there thinks as much of Marty as we do back at Western.”

Retired WCU track-and-field coach Danny Williamson was a graduate student assistant in the Catamount athletics program when Clark first landed in Cullowhee. In fact, Williamson, Briggs and Clark shared a house together for a while. “Marty had this amazing attention to detail and desire to make sure the job was completely done before he went home at the end of each and every day. He was not going to let any stone go unturned, and he focused on doing the little things right and making sure everything was perfect,” Williamson said.

“Marty and I shared a similar philosophy that we needed to plan for the worst possible thing that could happen – not because that’s what we wanted to have happen, but because we needed to be ready in case it did,” he said.

Later in college, Clark spent seven months on an internship with the University of Pennsylvania’s football team. But WCU baseball coach Jack Leggett, who went on to win more than 1,200 games and was inducted into the American Baseball Coaches Association Hall of Fame in 2014, called Clark and talked him into coming back to Cullowhee to finish his degree while serving the baseball team.

“I was drawn in by his personality, his smile, his respectful attitude and his passion for doing a job the right way and in a first-class manner. He was extremely loyal and conscientious and absolutely fun to be around,” Leggett said. “Because of his passion, attention to detail, work ethic and ability to solve problems and get along with people, I knew he had a great future in equipment managing and eventually in administration. He was a problem-solver, not a problem-seeker. Those types of people are rare and hard to find.”

After graduating from WCU in 1989, Clark attended a convention in Atlanta. There, he met the Indiana equipment staff who eventually offered him an assistant position helping out with baseball and football. Clark accepted and, within a year, was promoted to head equipment manager for the Hoosiers’ football team.

“For more than three decades, Marty has been an invaluable part of our IU Athletics team,” Dolson wrote. “In addition to his important contributions as a senior assistant athletic director, he’s also a trusted and beloved colleague and friend to so many of us in the department. His commitment to IU Athletics and his love for our programs is unsurpassed.”

Clark has made financial contributions to WCU over the years that have provided scholarship support to football team student equipment managers and student-athletes on the baseball and track and field teams, and has donated to the Catamount Club and to a football locker room renovation project.

“Marty wanted to provide opportunities for other kids to be rewarded for the hard work that they were doing as managers,” Williamson said. “The student manager job plays an important role for the team. Marty was like a member of the team. That’s the way the players and coaches treated him, because of all the things he did to help.”

Leggett, calling himself a “big Marty Clark fan,” said his memories of his former baseball student manager center around his smile, laugh and positive attitude. “He is one of the hardest working, loyal and caring people I’ve come into contact with in my 40-plus years in coaching, a friend forever,” he said. “He has enriched my life in so many ways. He’s an easy person to love and truly a quality human being that everyone respects. Western is so proud to have a man and an alumnus like Marty. I am proud to call him my friend.”

Williamson said he is not surprised to see Clark’s rise through the ranks of athletics administration. “Marty is where he is at in his career not because of who he knows or who he is or isn’t related to,” he said. “People realize the contributions and the dedication that he has given, and that’s the reason he’s done so well. This guy loves what he does, he has a passion for it, and he is a valuable asset to the program.”

A two-time cancer survivor himself, Briggs offered words of encouragement to Clark in his battle with the disease. " I would share with him that what helped me the most to get through it was to always visualize that there is light at the end of the tunnel,” Briggs said. “I never thought of myself as dying from it, but to just focus on weathering the storm. I had to have that kind of attitude to stay positive and to keep fighting. You can’t stop looking toward that light. Knowing Marty, I know that is how he is approaching it.”

Original story by Silas Albright published in revised format with permission of The Mountaineer newspaper of Waynesville, with additional reporting by Bill Studenc MPA. 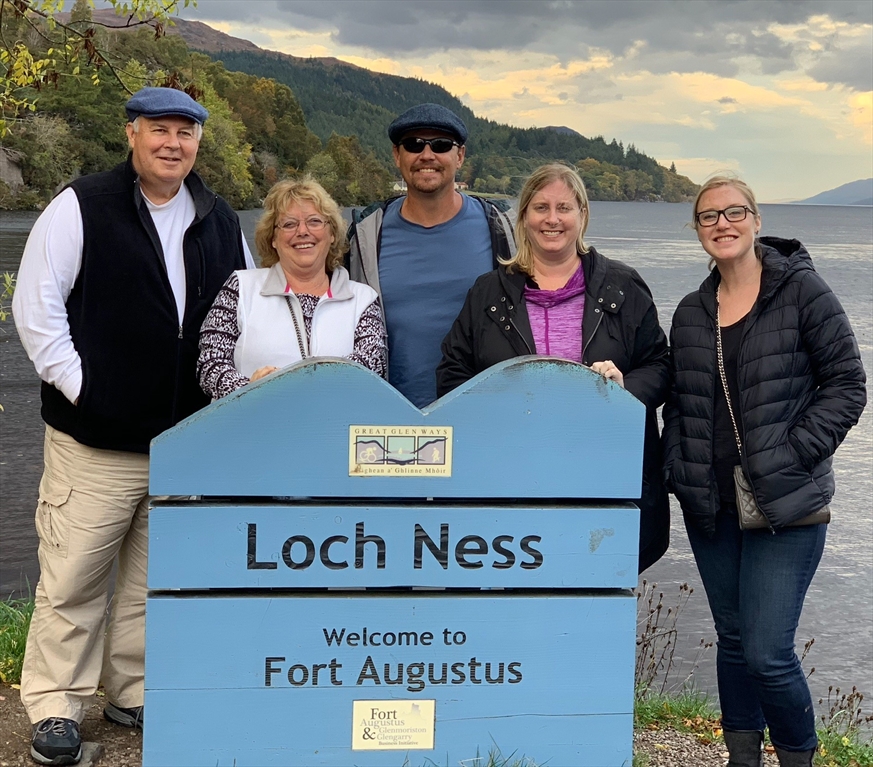 Jimmy Ramsey Alumnus of the Month