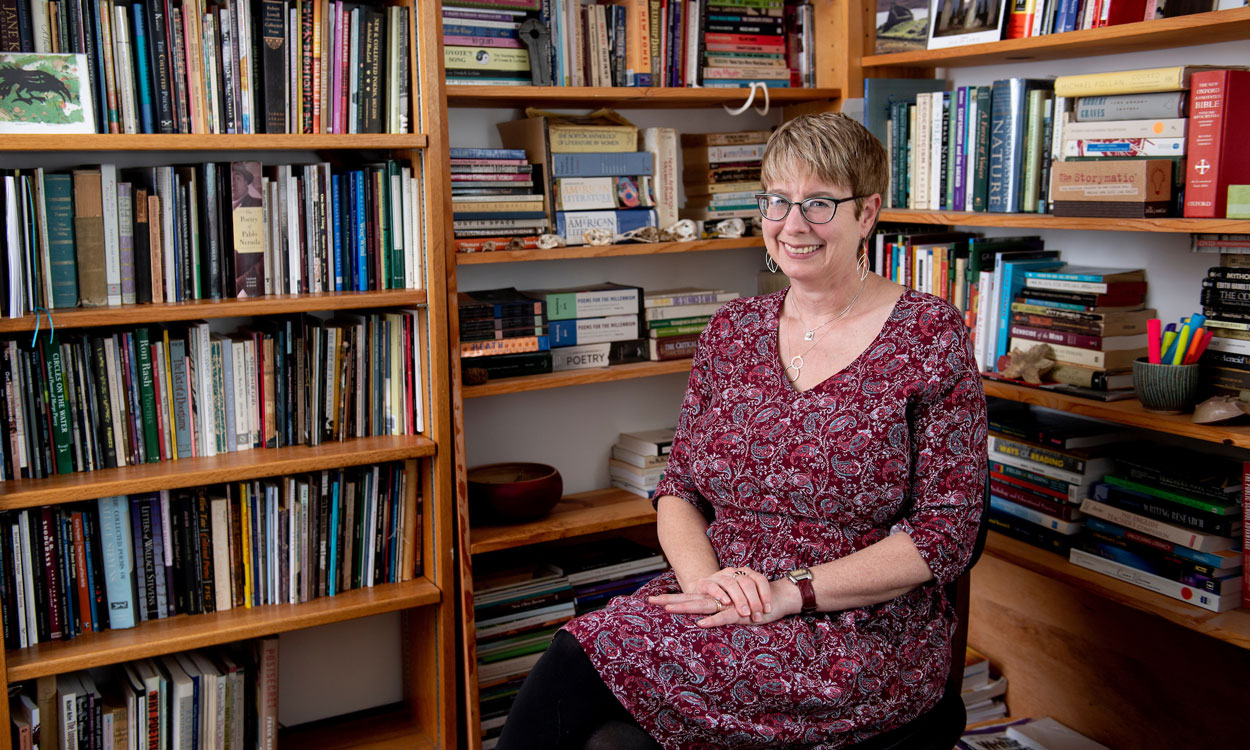 Catherine Carter, a professor in Western Carolina University’s Department of English, received one of the University of North Carolina System’s top awards.

Carter, a WCU faculty member since 1999, is among 17 recipients of the 2021 UNC Board of Governors Awards for Excellence in Teaching.

“These award recipients are among the finest faculty our state has to offer, said UNC System President Peter Hans. “They provide another reminder of the high-quality educations that our students receive each day across the UNC System.”

Carter, who teaches English Education, grammar and writing in WCU’s College of Arts and Sciences, said she was honored to receive “a teaching award of this scope.”

“I guess you could say it means that my efforts are kind of validated,” Carter said. “It doesn’t take an award to validate it. I would hope that we would all do what we do whether or not there are any awards. But it is nice to think that it is seen and recognized, especially by students.”

Carter came to Cullowhee in 1998 with her husband, Brian Gastle, also a professor in WCU’s Department of English. At the time, she was completing her doctorate in English language and literature from the University of Delaware. Upon completion, she secured a contingent teaching position in the Department of English.

She struck up a friendship with Mary Warner, the director of WCU’s English Education program and a School Sister of Notre Dame.

“Coincidentally, she also was living in the other half of the duplex in Webster where my spouse and I lived,” Carter said. “She got me interested in English Education and so I went back to school one more time, post PhD., here in the College of Education and Allied Professions and got my teaching licensure.”

Her goal was to work with Warner until a position opened up. Little did she know, Warner landed a job in San Jose, California, and Carter was asked to fill in as interim director of English Education in 2004. She became an assistant professor in 2005 and became the permanent director until 2014.

“Dr. Carter’s passion for her discipline and for the art of teaching – coupled with her innate compassion – make her an exceptional teacher and mentor,” said Richard Starnes, WCU provost. “As poet and a teacher of teachers, she not only empowers her students to look at their world with fresh perspectives, but she also serves as a role model for the many secondary educators across North Carolina who have been fortunate to be in her classes. Her students will tell you that she represents the best of us.”

Carter is the author of poetry collections “Marks of the Witch,” “The Swamp Monster at Home,” “The Memory of Gills,” and “Larvae of the Nearest Stars.”

“Dr. Carter fully embodies our university’s mission and commitment to teaching,” said Kelli R. Brown, WCU chancellor. “She is an accomplished author and a beekeeper, but, most of all, I am thrilled that she is being recognized by the UNC System for her gift of teaching.”

Carter will receive her award at WCU’s spring commencement ceremony, along with a $12,500 stipend and a bronze medallion.

The award was established by the Board of Governors in 1993 to underscore the importance of teaching and to reward good teaching across the university. They are given annually to a tenured faculty member from each UNC System campus. Winners must have taught at their present institutions at least seven years. No one may receive the award more than once.