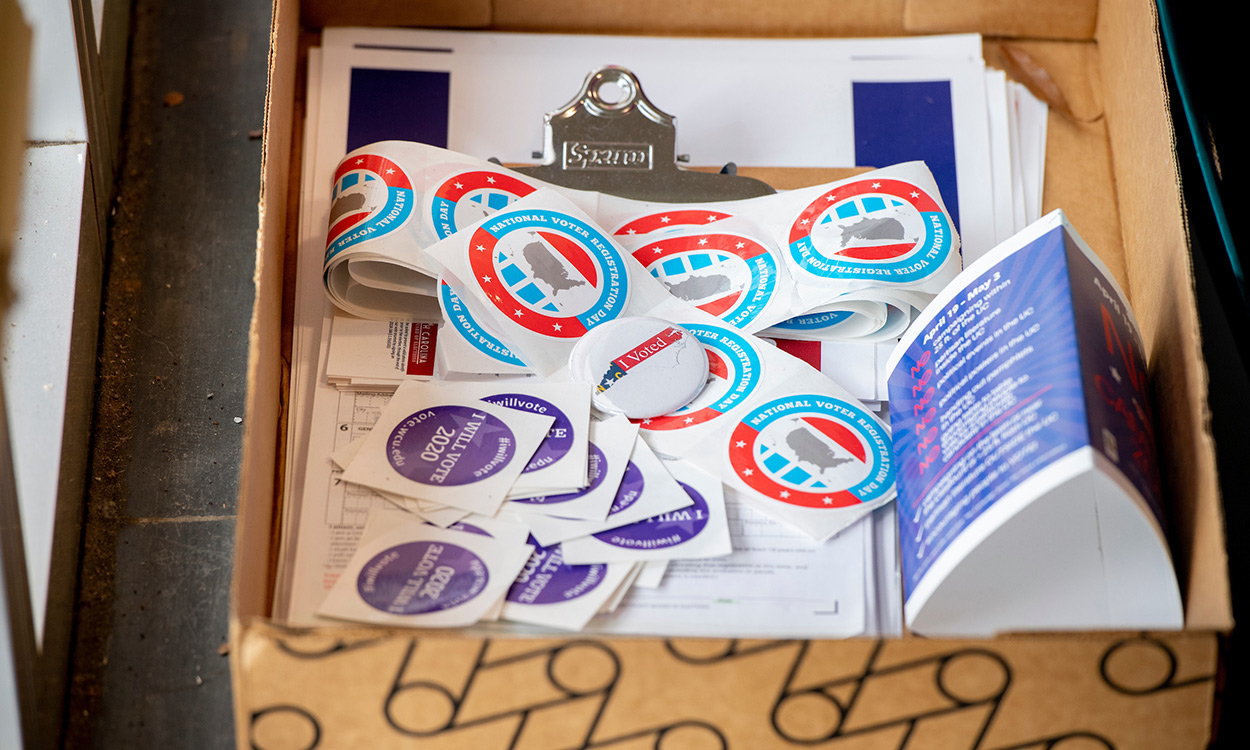 Western Carolina University has been designated as an Elite Leader Campus for its student voter participation efforts, one of only five institutions in the country to be so recognized this year.

The Andrew Goodman Foundation, a national organization that empowers young people to participate in the democratic process, awarded the distinction earlier this month. As an Elite Leader Campus, the university will see its annual grant from the foundation increase from $1,000 to $5,000.

“I am so proud to lead an institution that has such a rich culture of civic and voter engagement," said WCU Chancellor Kelli R. Brown. "Our outstanding faculty and staff guide our campus and students in understanding the values of civic engagement and through these efforts we have increased our student voting rate and have embedded civic engagement in our DNA and our everyday culture through such efforts as our interdisciplinary campus themes."

WCU, through its Student Democracy Coalition, has received numerous awards and recognition for working to register voters, build awareness of political issues and hold community forums and candidate debates. The university was named one of “America’s Best Colleges for Student Voting” by Washington Monthly, a nonprofit magazine that covers government and political issues. The university had the second-highest rate of student voter turnout for the 2016 general election among North Carolina colleges, according to Common Cause, with 67 percent.

"We are so proud of our ambassadors at WCU, as they have expanded their fellow students’ access to the ballot through effective organizing and advocacy," said Karena Cronin, program director of the Andrew Goodman Foundation. “With COVID-19 taking its toll on college students and education in general, we have had to rely increasingly on digital organizing to get out the student vote.

"In a pivotal election year, it is more critical than ever for us to highlight and elevate the leadership of our best campus teams," Cronin said. "Our goal is to create opportunities for students to share their best practices across our network and to have greater independence in building sustainable and innovative programs."

The foundation is named for a young social worker and activist, murdered by the Ku Klux Klan along with three colleagues in Mississippi in 1964 while trying to assist African Americans in registering to vote.

“For me, this work is important because the first-time voter of today becomes the habitual voter of tomorrow — it has to start somewhere. Why not WCU?" said Lane Perry, executive director of WCU's Center for Community Engagement and Service Learning, which helps coordinate Student Democracy Coalition activities. "Our democracy depends on the belief in and commitment to this pipeline. It is my honor to work with student leaders and organizations who seek to engage students from all political backgrounds and leanings in this powerful and influential process.”

For more information, contact the Center for Community Engagement and Service Learning at 828-227-7184.