Cullowhee Valley has been home to many over the centuries, most notably the Cherokee people, with transformative generations etched upon the landscape before the establishment of Western Carolina University.

WCU regularly offers summer archaeology methods field schools that provide a glimpse into the valley’s past. Recent projects have taken advantage of ongoing and planned construction to do studies on campus. One took place between Friday, July 5, and Tuesday, Aug. 6, in the grassy expanse between Norton Residence Hall and Cullowhee Creek and was led by Ben Steere, director of WCU Cherokee Studies Programs and associate professor of anthropology. The purpose was twofold: to instruct students in methods from archaeological mapping and excavation to care and documentation of artifacts, and to develop an evaluation based on findings to assist construction and future development.

The field school findings also will be presented in September at the 2019 Cherokee Archaeology Symposium at Harrah’s Cherokee Casino Resort, an annual event where archaeologists present their work on projects in the Southeast to members of the Cherokee community. 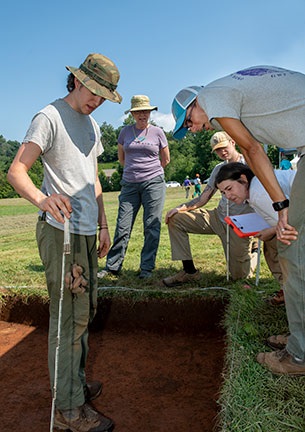 WCU plans are for fill dirt to be added onto the site and the surface leveled to make way for intramural athletic fields. Prior to that work, four rectangular excavation pits dotted the landscape at regular intervals of some 20 feet, with a grid of survey flags scattered throughout.

To a knowing eye, the pits reveal chapters of history, especially once below the “plow zone,” which was the surface from when the area was part of a working farm that operated until the 1960s. During a recent work day at the site Steere pointed to a dark, circular spot appearing on top of the excavation layer of one pit. “This is where you start to see features. This was a post hole. Cherokee ancestors used post in ground construction, so a corner of a home was here,” he said. “We see a nice cluster of posts over here, further indicating the presence of a structure.”

Another pit revealed a large pile of stones, a probable location for an outdoor cooking oven. Becca Rhinehart, a Canton resident and WCU graduate in anthropology, described the discoveries in this pit as particularly exciting, as almost every scrape of a trowel revealed more artifacts. But not all excavation work was as immediately productive.

“I’ve pulled out a lot of rocks and asked ‘Is this anything?’” said Bailey Lawrence, a junior from Sanford majoring in history and anthropology. “But, I’ve also uncovered artifacts and learned to detect distinguishing features more readily. It’s great seeing what we’ve found, cleaning it off and taking it back to the lab and analyzing it.”

Paul Webb, an archaeologist and cultural resources program leader with TRC Environmental Corporation, an engineering firm with offices in Asheville and Chapel Hill, said working with the field school in exploration and inventorying is important to make sure archaeological features aren’t further compromised by development.

“The Norton Hall site is a remnant of what was once an extensive array of prehistoric to historic Cherokee archaeological sites, representing thousands of years of human occupation along Cullowhee Creek and the Tuckaseigee River,” Webb said. “Many of such sites have been destroyed by development, but others survive, sometimes in unlikely parts of campus or beneath buildings and parking lots. Ben and the other WCU archaeologists are doing a phenomenal job in teaching students about archaeological field methods, as well as relaying the importance of these sites to the scientific and living Cherokee communities.” 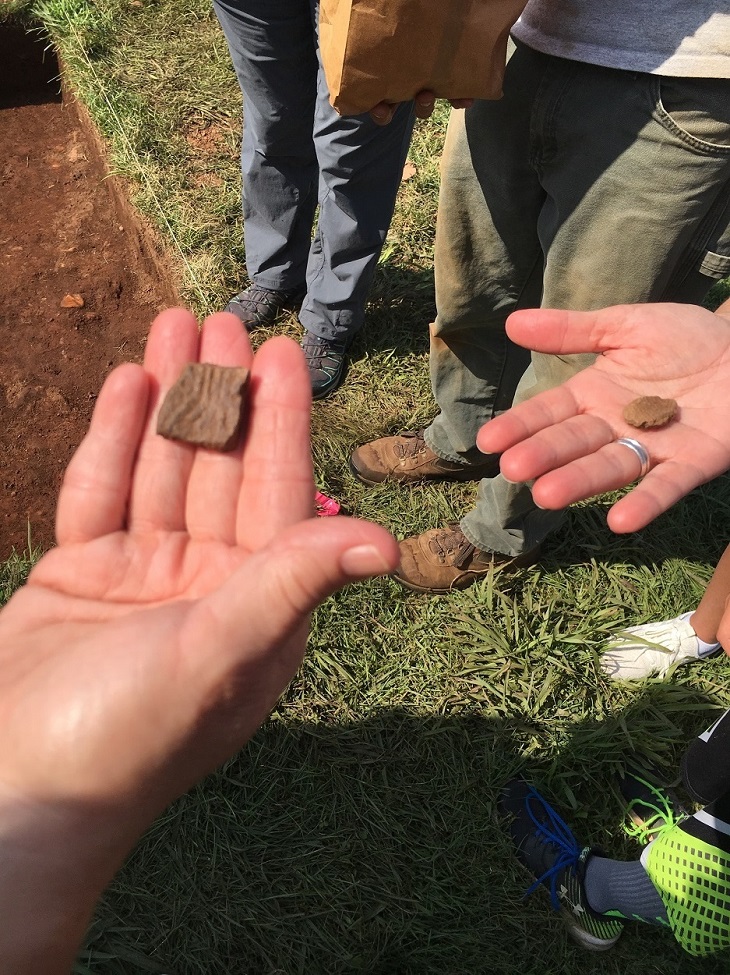 For some participants, the field school was much needed hands-on experience.

“I’m hoping to go into public history and museum work,” said Jonathon Simons, a Hendersonville resident and WCU senior in history. “History professions want you to have some archaeological knowledge and experience handling artifacts and things like that, being familiar with working in a lab. It’s the sort of experience you take forward in your career.”

The same was true for Sawyer Bullock, a Cary resident and also a WCU senior in history. “I plan on going into archaeology, actually,” he said. “This is a first step I needed to take and a fun, great experience.”