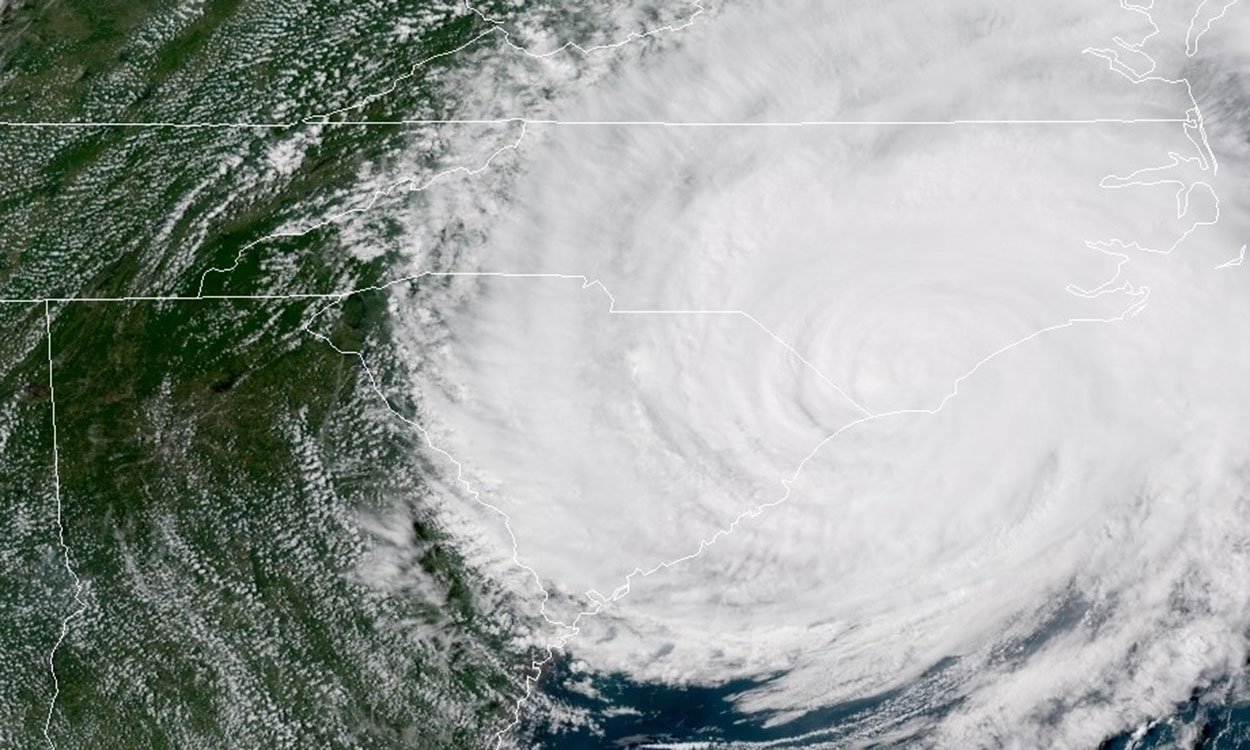 Florence swirls along the southeastern North Carolina coastline in this satellite photo from Friday, Sept. 14. (Photo courtesy of the NOAA/NESDIS Center for Satellite Applications and Research)

The atmospheric forces that guide weather systems did a big favor for the Western Carolina University community last weekend (Sept. 15-16) when the remnants of Hurricane Florence slipped by to the east of Cullowhee as the storm center tracked northward out of South Carolina.

The result was that the WCU campus completely escaped damage from the storm that produced historic amounts of rainfall in southeastern North Carolina and caused classes to be suspended at most other University of North Carolina System campuses. Rainfall totals reached nearly 3 feet in the cities of Elizabethtown and Swansboro, but National Weather Service records indicate that only .17 of an inch fell in Cullowhee between Friday morning, Sept. 14, and Tuesday morning, Sept. 18. And, there was not enough wind in the area to be a concern, said Shane Stovall, director of emergency services at WCU.

“We monitored the storm track all last week and into the weekend, and the way it moved by to the east of us was very fortunate,” Stovall said. “With the counterclockwise rotation of these tropical systems, it is always better to be on the west side of the track. The upper right quadrant always gets the worst weather in terms of rain and wind, with storm surge on the coast. We have worse weather in many thunderstorms that move through than we experienced during this event.” 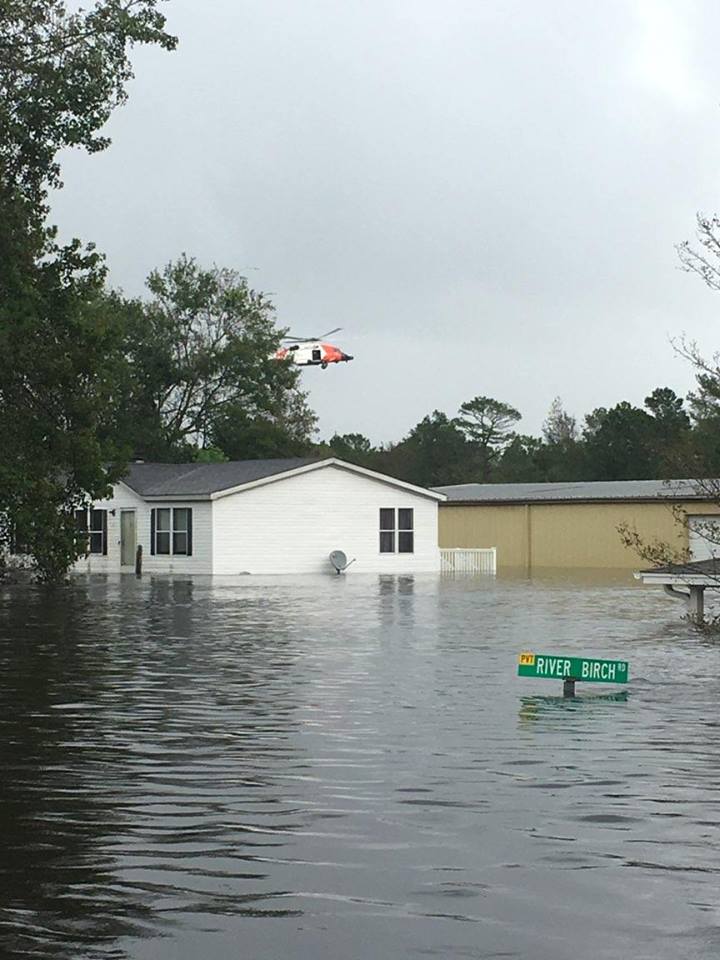 Storm-caused flooding and a rescue helicopter are shown in this photo taken in Burgaw by a representative of the Greensboro Fire Department.

The state’s preparations during the approach of Hurricane Florence resulted in a senior telecommunicator from WCU’s Emergency Communications Center, Megan Nicholson, being deployed to serve as a radio operator in a regional coordination center in Kinston. Nicholson returned to Jackson County on Wednesday (Sept. 19) after a week of coordinating communications with first responders during hurricane landfall and the first days of the recovery effort. She had received advanced communication training several years ago as part of a statewide initiative to prepare for emergency situations such as hurricanes.

"Incidents like this are quite the humbling experience, and I was honored to be picked to deploy and work at Regional Coordination Center-East for Hurricane Florence," Nicholson said. "I was able to work with an awesome, dedicated group of responders from many different agencies and states. The RCC-East staff put in a lot of hours for those affected and continues to work 24-hour operations to fill the needs of the eastern branch region. This is truly an experience I will never forget."

Speaking of preparations, Stovall represented WCU last fall as the UNC System conducted a full-scale emergency management exercise named Operation Zephyr, which tested the impact on operations from a mock Category 5 storm dubbed “Hurricane Zephyr.” Stovall participated as a member of a damage assessment team, and the UNC System’s partners for the exercise included the Federal Emergency Management Agency, the American Red Cross and N.C. Emergency Operations personnel. The purpose of the activity was to access pre-hurricane preparedness and post-hurricane recovery capabilities. Stovall said he already has received word that some of the lessons learned by emergency officials during the exercise were incorporated into planning and have proven to be beneficial to the current recovery effort.

As that effort gains steam, UNC System officials have established a website, northcarolina.edu/florence, to provide updates about the storm’s impact on system institutions. As of Sept. 19, classes were still suspended at three campuses – UNC-Wilmington, UNC-Pembroke and Fayetteville State University. 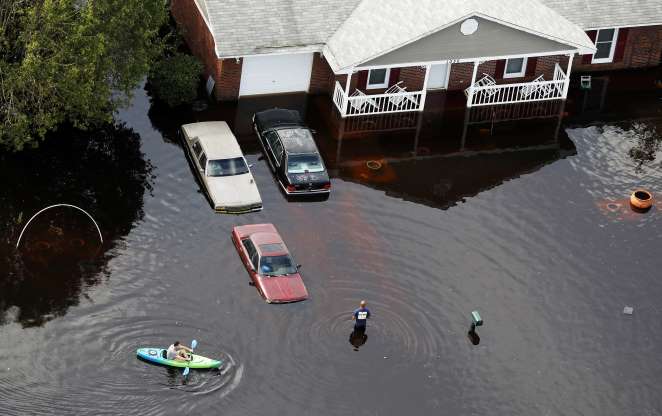 This photo shows flooding in the Fayetteville area. (Photo courtesy of Ken Odegard)

Numerous relief efforts are organizing across the state, and WCU’s Center for Service Learning is collaborating with Jackson County, the town of Sylva and Tuckaseigee Water and Sewer Authority in facilitating a donation drive on campus that runs through 3 p.m. Thursday, Sept. 27. WCU and its partners are working with the American Red Cross to get supplies to locations with greatest need, said Lane Perry, director of the Center for Service Learning.

A list of primary items needed is posted on this web page. Donations should be brought to the Center for Service Learning, located in Room 273 in Belk Building, by 3 p.m. on Sept. 27. Also, pickups from offices on campus can be arranged by emailing Perry at laneperry@wcu.edu.

WCU community members who want to make monetary donations should monitor the WCU Facebook site for ways to assist the Red Cross or We Wilm Rebuild, an organization led by UNCW students, Perry said.

Plans are already in the works to offer an alternative spring break trip for WCU students next March that will involve hurricane recovery work in Kinston, he said.