About the Coulter Faculty Commons

The Coulter Faculty Commons for Excellence in Teaching & Learning at Western Carolina University serves full and part-time faculty and Graduate Teaching Assistants (GTAs) in all areas of teaching & learning. We work to create an environment where faculty can come together in the spirit of creativity, collaboration, and community, where becoming an ever better teacher or mentor is the most significant and recognized achievement that any faculty member can seek and where students have superior learning opportunities and experiences. 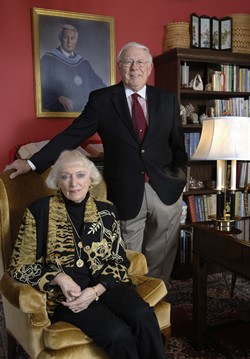 The Commons, which was the dream and vision of Chancellor Emeritus Myron Coulter, supports faculty in their professional development as teachers and scholars and learners. Faculty and GTAs have an open invitation to contact or visit the Commons and talk with the staff. Commons staff are also willing to meet with faculty in their offices or elsewhere.

The Faculty Center for Teaching Excellence was established at Western Carolina University in 1988 based on recommendations from the Chancellor's Task Force, commissioned by Chancellor Myron L. Coulter in 1985, on Faculty Development and Evaluation. After three years of researching teaching literature and sponsoring teaching events, the Task Force submitted a 60-page summary report that recommended a structure for the new center. Chancellor Coulter accepted this report in June 1988, and the Center opened that August. The new center was located on the main floor of Hunter Library near the University Media Center. The Task Force's Instructional Services Coordinator, Ben Ward, became the Center's founding director. To staff the Center, the Chancellor provided funds for three Faculty Fellows:

In 1994, after Chancellor Coulter announced his retirement, the WCU Board of Trustees renamed the Center in his honor, designating it the Myron L. Coulter Faculty Center for Teaching Excellence. Later that year, the University Media Center was phased out and the Media Center's six full-time staff members merged with the Faculty Center to provide increased support for faculty development in instructional technology. At that time, the Center's staff affected a further name modification: The Myron L. Coulter Faculty Center for Excellence in Teaching and Learning.

Until his retirement in December 2001, Dr. Ben Ward served as the Center's director and ably guided it during years of contributing to the enhancement of the teaching & learning experience at Western. Dr. Alan Altany, previously a professor of religious studies at Marshall University, became the new director in December of 2001.

The Center designated the academic year 2003-2004 as the "Year of the Scholarship of Teaching & Learning (SoTL)." Under Dr. Altany's direction, Western became recognized nationally for its SoTL work, specifically the development of Mountain Rise, an international peer-reviewed journal for the Scholarship of Teaching and Learning. Faculty Learning Communities were established and the annual SoTL Faire grew and expanded to a 2-day event.

The Reorganization of the Coulter Faculty Center

In 2005, Provost Kyle Carter called for a study to reorganize the Center to better serve faculty efforts to enhance student learning. In response to faculty requests, the Coulter Faculty Center combined its resources with Educational Technologies and the Division of Educational Outreach. Center staff began to integrate professional development activities, instructional design, and technology support into a single point of service in Hunter Library.

Dr. Anna McFadden moved from her position as Chair of the Department of Educational Leadership and Foundations to lead the effort as Director of the reorganized center. McFadden, a faculty member for 10 years at WCU, spent three months studying in-depth the needs of faculty. The faculty's desires were clear: they wanted a seamless solution to enhancing both their pedagogical techniques and technical abilities. In response to this need, the Center clarified its vision, mission, and strategic direction.

In the expanded Center, faculty find assistance in designing curricula, integrating supported technology to augment student learning, using distance learning formats, training to use technologies, and exploring the scholarship of teaching and learning.

In 2010, Dr. McFadden moved to a new position as Director of Academic Engagement and Governance for the Division of IT.  From 2010-2016, the Center was led by Dr. Laura Cruz, an Associate Professor in the Department of History who also was instrumental in changing the name from "Center" to "Commons" in recognition of the aspirational goal to be a part of a connective matrix of faculty support and engagement rather than simply a "place" for them to come.

In 2016, Dr. Martha Diede was appointed as the interim director and confirmed as the Director after a national search in 2017. Her focus during her tenure was on improving faculty outcomes while helping them clarify and improve student learning outcomes and course alignment.  Dr. Diede left WCU for a position at Syracuse University. Dr. Jonathan Wade, the Senior Educational Technologist at WCU, served as the Acting Director of the Center from June of 2018 to March of 2019.

In March of 2019, after a national search, Dr. Eli Collins-Brown took the reign as the new Director of the Commons.  Dr. Collins-Brown has been working in higher education for 20+ years as a curriculum developer, instructional designer, technologist, instructor and leader. Her focus has been on web-based, blended and online education but over the years has branched into the improvement of teaching and learning environments in all modalities and educational/faculty development. Her work centers on creating effective and meaningful learning environments, with or without technology. Through her research and practice, she has found that technology-supported instruction can create significant learning experiences in different modalities that enhance engagement, discussion, access to content and connectedness to students.

The Faculty Commons will foster a community of teacher-scholars promoting excellence in teaching and learning and other forms of scholarship.

To advance research and innovation in Teaching and Learning.

To expand the role of the Coulter Faculty Commons as a central resource for support and information for all faculty both on and off campus.

To facilitate the effectiveness and efficiency of technology in teaching and learning;

To provide support or facilitate events and opportunities for collaboration and conversation among faculty and students.

Give to the CFC

Help Us Better Serve You