"What we're doing is improving an avenue for [young people] who are blessed by God, who have athletic ability, who can run and jump and throw and hit better than the average person," said David Brinkley, a former Catamount football player who graduated from WCU in 1976 with a bachelor's degree in education. His wife, Marie, graduated in 1977 with a bachelor's degree in clothing, textiles and merchandising from the School of Technology and Applied Science. "All we're doing is helping them dream, helping them enhance their position. Hopefully, they'll get a college education, and when they get a chance to be a David and Marie Brinkley, they'll bless others," he said. 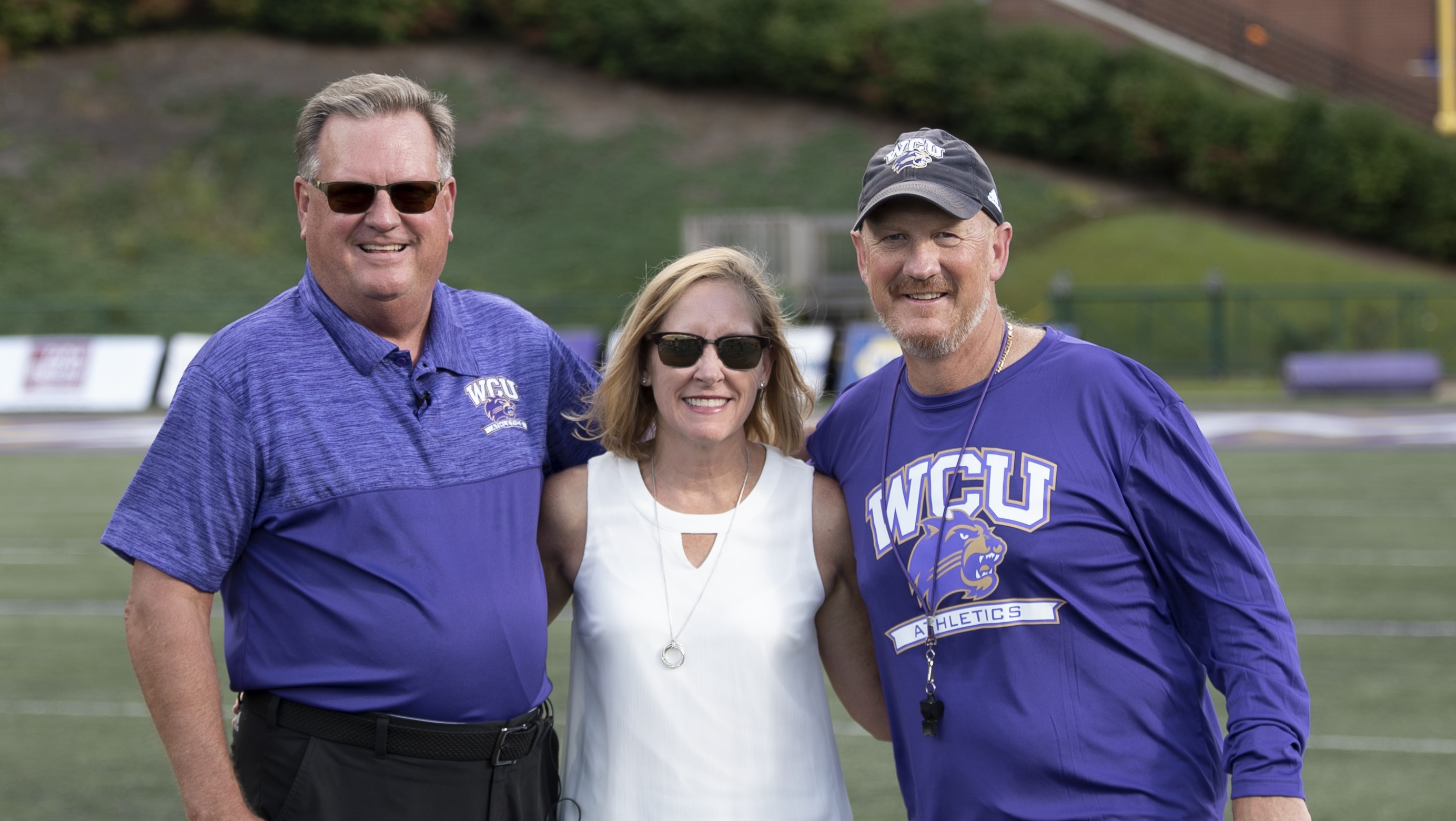 The Brinkleys, who live in Kings Mountain but met as teenagers growing up in Valdese, have been blessing WCU a lot lately. In the past 24 months, they've given more than $600,000 – including the weight room donation – to improve the athletic training facilities at WCU, which are used by all Catamount athletes, and to provide athletic scholarships. The weight room was renamed the David and Marie Brinkley Athletic Weightlifting Facility.

"From a coach's perspective, it fires me up to know that someone in the community notices what we have going on here," said Evan Barr, WCU director of athletic performance. "Having this new room to come into every day shows these athletes this community is pouring back into them, so they come in with a renewed drive because of families like the Brinkley family."

Holloway, a captain on the football team, agrees. A fifth-year senior, he sees a palpable difference in his teammates' energy and enthusiasm since the new weight room came to be. "My freshman year, the weights weren't up to date," said Holloway, of Henry County, Georgia. "There were weights that were broken and things of that nature, but we didn't have the ability to purchase new equipment. But now the equipment is so new, top-of-the-line, just everything we need as a team to be better."

Some of the new equipment includes the pit shark, which Holloway said "takes the stress off your back, but still allows you to work your lower body," and new, top-of-the-line leg presses and leg extensions.

"Coach Barr incorporates all of the equipment into the workout," Holloway said. "Now, we go in there with a different mindset. We go in with the mindset of 'we have the equipment, so we can get better.' We look forward to investing in that. Before, we were limited."

Keaton's favorite equipment is the new leg press machine, which allows athletes to tailor their workouts to injuries or other issues. "I tore my ACL a few years ago, and with the new leg presses you can use one leg at a time instead of both, so it really gives me an opportunity to work on my leg and build it up stronger," she said. She also appreciates the fresh paint and new flooring, adding, "It feels a lot cleaner in here." 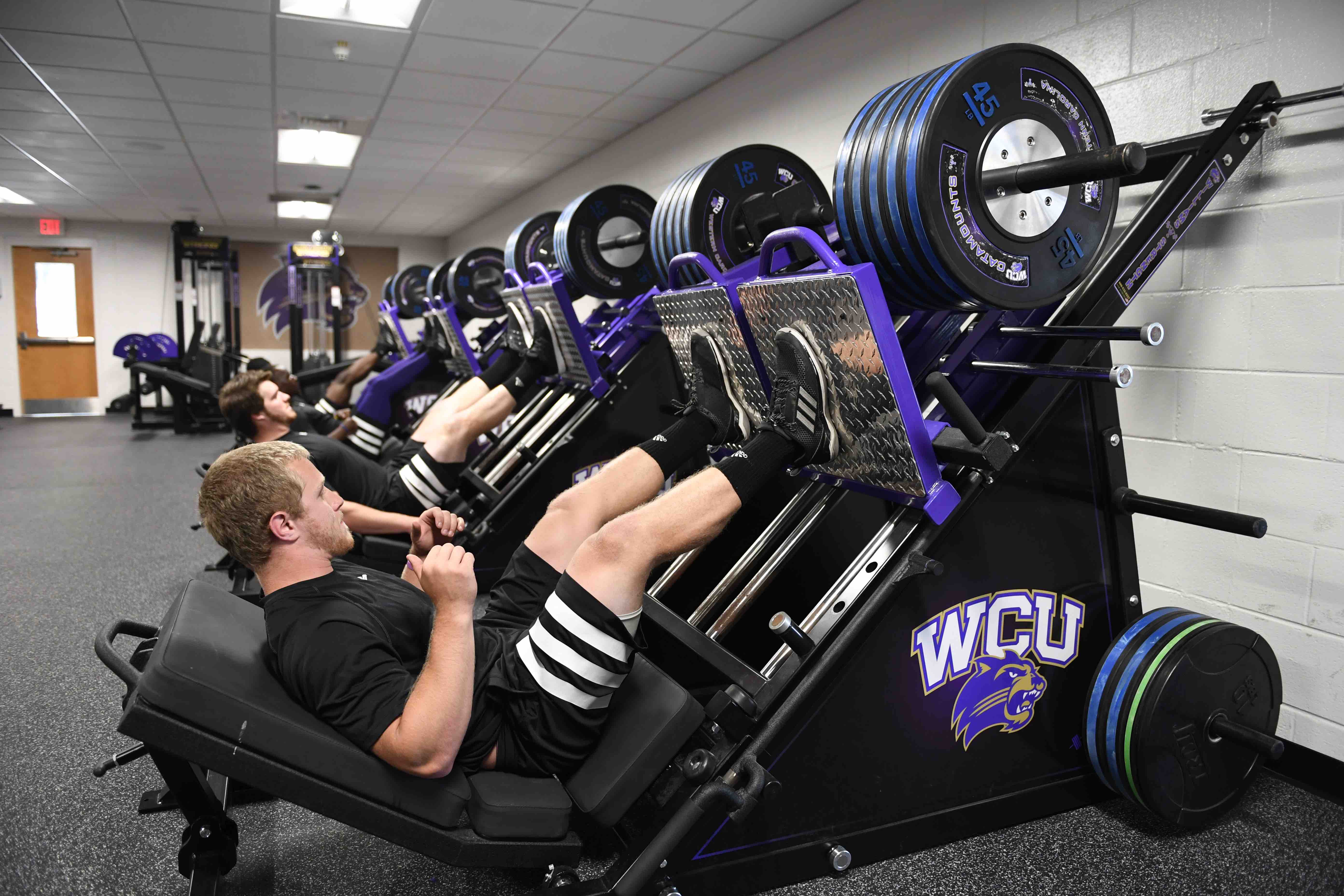 One of the biggest benefits of the new weight room is simply having enough equipment so that members of the same team can work out together rather than in groups, which builds collective energy and enthusiasm. "Now, everybody can get in there and do the same workout, whereas before we had to break it up and some people had to come several different times," Holloway said.

And then there's that new sound system that can play a variety of music in three different workout rooms at the same time. Think yoga music in the stretching room, with rap, hip hop, Motown or rock in other spaces. (Barr said the coaches squeeze in a little country music when the athletes aren't around.)

Besides the obvious physical benefits to the athletes, the weight room has become a de facto club house for the football team, Holloway said, a little home away from home. "Before, we didn't go around the weight room that often. But now, we might put a grill out here, eat good food, hang out as a team," he said. "The team bonding is what's most important out of everything. We've developed a bond so strong it can't be broken."

For Keaton, of Roanoke, Virginia, the Brinkleys' donation was a vote of confidence in her and the other athletes and an investment in the future of WCU athletics. "You have such a sense of pride in what you're training for and who you are doing it for," she said. "You realize people actually care about you and your sport because they're putting money in to you. Who doesn't want somebody behind them? You know there's somebody rooting for you."

Comments like Keaton's are music to David Brinkley's ears. He tears up talking about helping young people feel good about themselves and realizing their dreams. "That's important to me. I wasn't the luckiest kid coming up. We had some hard, tough times," he said.

But he overcame them with smarts, hard work and his wife's family's encouragement and support. And it has more than paid off. Brinkley had a short career as a high school football coach in Kings Mountain, coaching alongside his long-time friend and former WCU roommate Dan Brooks, who won the national football championship in 2016 as a defensive coach for Clemson University. After a few years, Brinkley switched gears, and eventually opened Brinkley Financial Group in 1989, a wealth management company, in Kings Mountain with an office in Charlotte. He eventually diversified his business by adding rental properties, multiple farms and investing in other businesses.

"A wise man told me one time, if you really want to develop wealth there are three ways to do it," Brinkley said. "One is to invest in the stock market, second is to invest in real estate and third is to invest in a private company. I've done all of those. Sometimes those don't work out. In 2008, there were a lot of hard times for a lot of people in the real estate business. But when you get down, there's something about getting up and going to work every day that somehow makes your luck fall in place. You meet somebody in your life who makes a difference."

That somebody in Brinkley's life was his wife, Marie, his high school sweetheart and someone he believed he would marry before they ever met. Marie's family rented Brinkley's grandmother's house, which sat across the street from Brinkley's father's business, when they first moved to Valdese. Brinkley told his mother early on that he planned to marry one of the two pretty blond-haired sisters who lived at the house. Ask Marie and her husband how long they have been married and he answers first: 41 years. "She's got such a good heart," he said. "She's taught me so much about love and family and children. Her dad was in the textile industry. He ran textile plants. He had graduated from N.C. State. None of my family much had done any of that."

Brinkley credits his father-in-law with igniting his interest in business, but he already had the work ethic. At age 8, Brinkley was working in his father's concrete business, rolling wheel barrows, carrying bags of sand and concrete, and doing whatever his father told him to do. "We were worker bees," Brinkley, 64, said. "My grandfather was a barber. He did some farming on the side, and that's what we did. We worked. The people who know me in Valdese know that my family were workers and I'm proud to say I'm a worker."

He also played a lot of sports, and when he dreamed, well, he dreamed of being the next Mickey Mantle, Joe Namath or Wilt Chamberlain. "I used to dream and my mom would say 'you need to dream again because you had hard luck that time.' I still remember that kind of stuff," Brinkley said.

But did he ever dream of one day donating more than a half a million dollars to his college alma mater? "Never in my life," he said. "He was a high school football coach," Marie, 63, added. 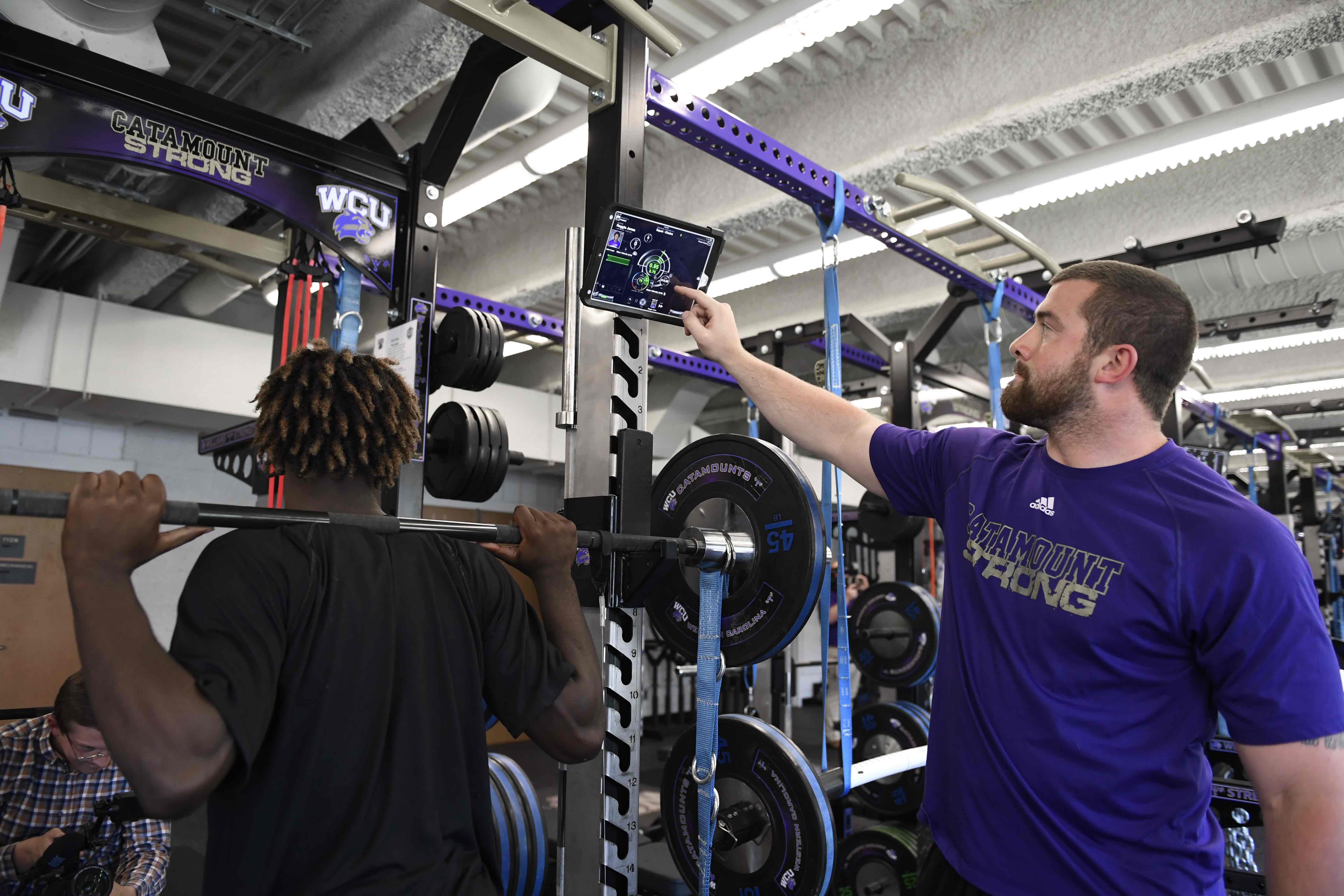 But that changed when the two Brinkleys became three, then four, then five, and Brinkley worried he couldn't support a wife and three children on a high school coach's salary. So he did what he had always done and went to work.

"People ask me sometimes how I got here, and I don't know, to tell you the truth, but the answer is that I got up and went to work every day," Brinkley said. "I don't apologize for working, because I've been blessed. We're always looking for opportunities. When we came up here we saw an opportunity. Then we went home and did what we always do – we said our prayers and we felt like this is where we were being led."

"And there was such a need here," Marie said.

Brinkley truly believes his and Marie's investment in the Catamounts' workout facilities will soon pay off for all of WCU's student-athletes. As a member of the 1974 NCAA Division II national playoff team, Brinkley knows what that kind of success feels like and he sure wants others to experience it, too. "I think all of our athletic programs, every one of them – male and female – in the next 12 to 24 months, you're going to see a lot of difference," Brinkley said.

Holloway and Keaton believe so, and they're grateful for the Brinkleys' belief in WCU's student-athletes and their generosity to support those beliefs. But Brinkley says he's motivated by something more than money.

"The money side has just been a blessing to me," David Brinkley said. "I get up and go to work every day. It's important to me that I give back. It's something that Marie and I have in common. I just believe that God's blessed me and I should share my blessings. And that's what I try to do."