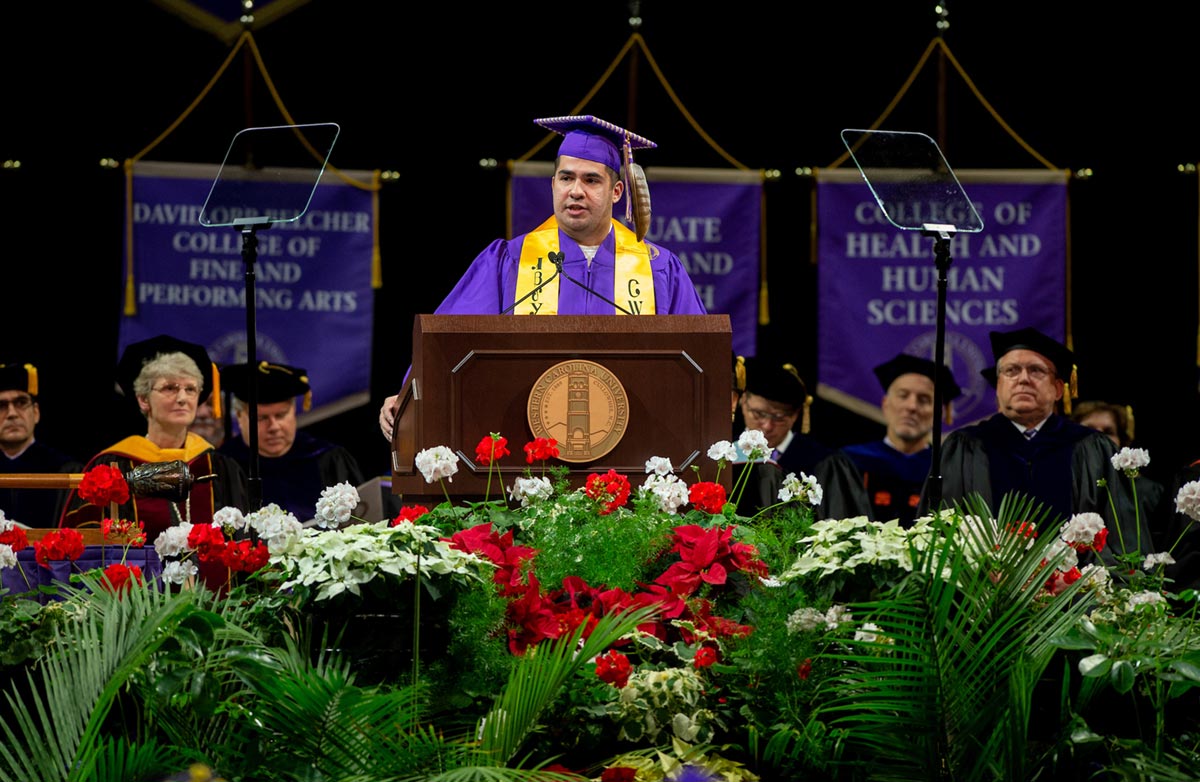 Driver Blythe was late to class one too many times as a freshman at Mars Hill University. This time the professor had locked the door, leaving Blythe to peer through the double door windows at his classmates peering back. “I didn’t do it again,” he said, recalling the incident from six years ago. “It was very embarrassing.”

And a good lesson, too, he conceded, especially coupled with the one from another professor who emphasized the economic impact of punctuality: Students were paying for a 50-minute class, so they should show up on time to get their money’s worth.

“That really struck home with me,” said Blythe. “That’s why I like to show up to class on time.” 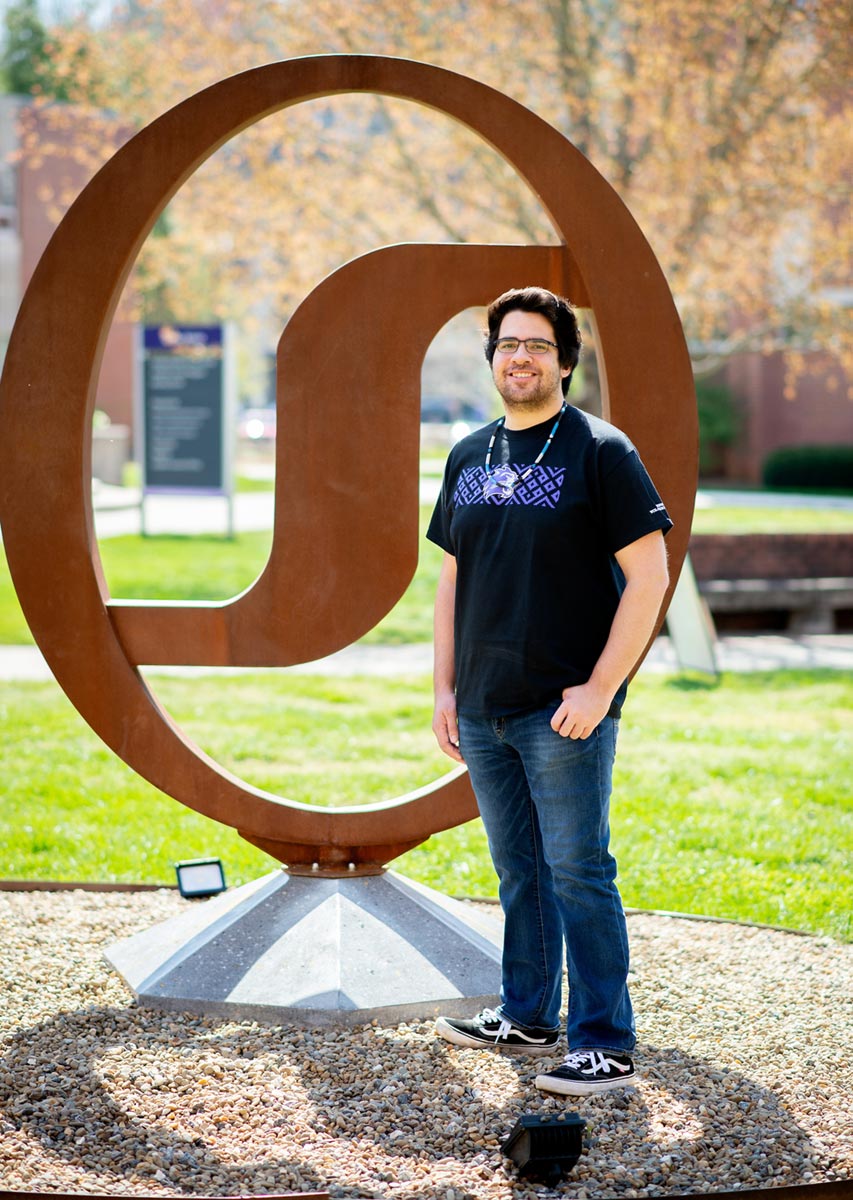 And show up he did, time and again, earning an associate degree from Southwestern Community College after transferring there from Mars Hill, and a bachelor’s degree from Western Carolina University, where he graduated in December and gave the commencement address. He’ll continue his education in the fall at WCU, where he is enrolled in the school’s master’s degree program in social work. A member of the Eastern Band of Cherokee Indians, Blythe is believed to be the first Native American to give a commencement speech at WCU — an unexpected honor that left him in awe and “like the weight of the world” was on his shoulders — but in a good way.

“People are saying ‘This guy can handle the task. This guy is the person we want to ask if they can handle the task,’” he said. “It was surprising to me because I had been a kid who hadn’t done anything academically in high school, who was stubborn, who wasn’t necessarily on the right path to doing what he wanted to do in life. I credit my family with pushing me in the right direction."

Blythe, 23, is well aware that many of his tribal peers don’t make it to college, whether because of a lack of familial support or ambition, or personal obstructions such as drug or alcohol abuse, and that frustrates him. His own academic achievement has given him new direction and purpose. It has led to his new goal — to help the youth in his community excel and succeed.

“Unfortunately, I’ve had to attend funerals of some of the kids that I went to school with who were in a broken home or they were on a bad road and nobody really cared,” Blythe said. “I am tired of seeing young adults my age or younger being buried. I am tired of seeing kids my age who were athletically gifted or academically gifted, who put their all in in high school, go down a bad road due to poor decisions.”

According to the EBCI Higher Education Program, of the more than 16,000 members of the tribe, 410 students are enrolled in college for the 2018-2019 academic year, a 9 percent increase since the 2016-2017 academic year. “If the growth trends of the past five years continue for the next five years, we will be serving 510 students in the fall of 2023,” said James Bradley, secretary of education for the EBCI. “We are also currently working on internship and apprenticeship opportunities to provide a better path from college to career.”

Blythe wishes more tribal members would pursue college degrees because the opportunities are available. He wants to work with local youth and help keep them on track with their lives and their academics. He’ll soon take the first step when he gives up his job at the Cherokee Phoenix Theatre, where he’s worked for six years, for a few internships with tribal agencies that focus on youth. With his bachelor’s degree in criminal justice in hand and plans for his master’s degree in place, Blythe is on a mission to lift up the youth in his community one homework assignment at a time, using himself as an example. And the key, he believes, is academics.

“I want to set the standard where academics come first no matter how you go to college,” said Blythe, who graduated from Swain County High School in 2013. He played soccer until an injury sidelined him his senior year, a mishap that got him thinking about the importance of maintaining one’s grades, especially for athletes who think they may have a collegiate career. “Academics are going to play a part if you go there strictly for college or if you’re a college athlete. One of the five things I tell people whenever they’re attending college is you have to do your homework. You can’t turn it in two or three weeks later.”

Blythe said he struggled in high school with direction and discipline, which he had to learn on his own because of his attention deficit hyperactive disorder. Despite the support from his family, in the end it came down to the choices he made and nobody else. “They’re not the ones who are going to be in the library for hours studying, writing your papers, taking your exams, getting to class, doing your homework,” he said. “It boils down to if you want to do it. And that’s the decision I made going into college: I want to succeed. I want to get my education. If I attain my master’s degree, I will stay in that 1 and 2 percent who have managed to do that in my tribe. And down the line, who knows, maybe a doctorate is in the future.”

Blythe’s ambition and dedication to improving the lives of youth in his community have left an impression on those who know him. “I am impressed with Driver, and I hope he continues to be motivated to encourage our youth to pursue their educational goals after high school,” said Bradley. 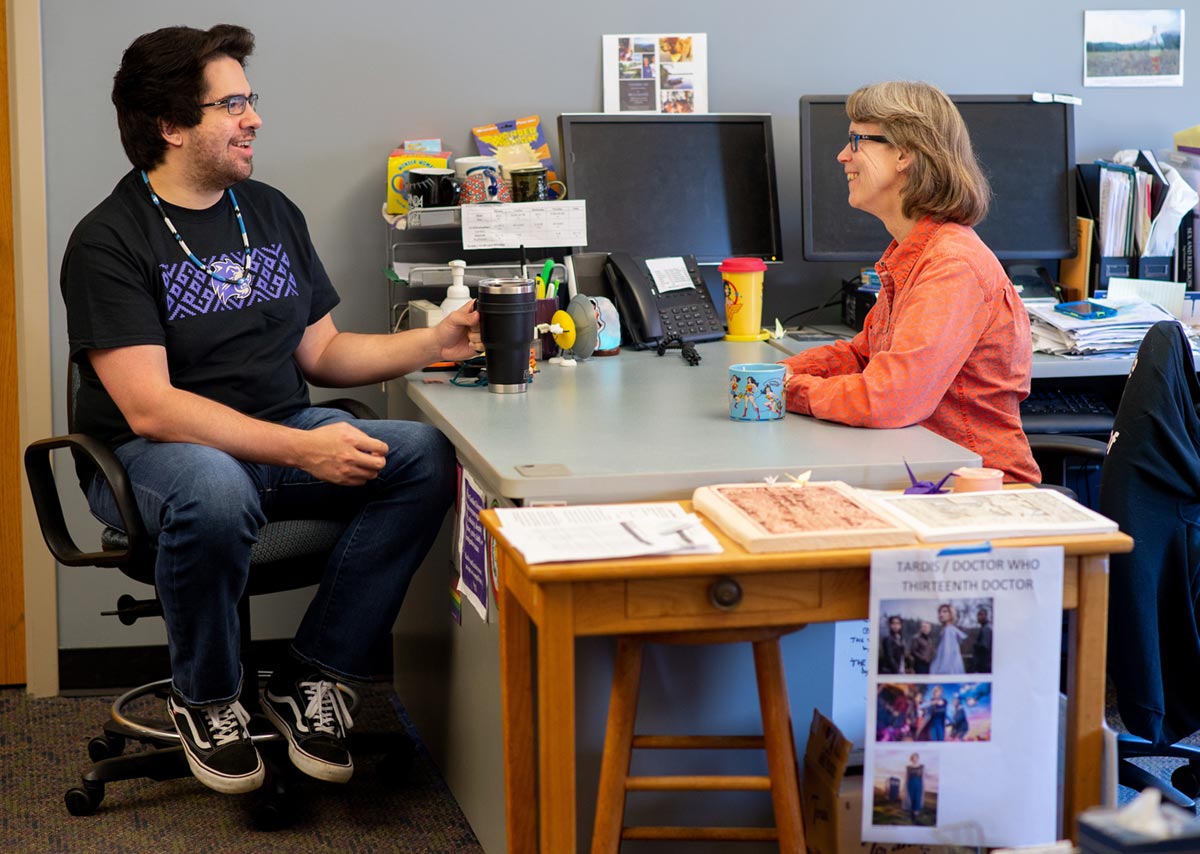 Amy McKenzie, administrative support associate for the Department of Philosophy and Religion and part-time adjunct professor, said Blythe is an excellent role model for how to succeed. “He exhibits an impressive combination of qualities: determination, self-motivation, generosity, curiosity, humility, intelligence and kindness, and he’s a great listener,” McKenzie said. “Driver is here to work. He has not sought the spotlight nor does he have a sense of entitlement. He has earned and worked for his accomplishments, in order to give back to his WCU and EBCI communities.”

Blythe is just grateful he has found meaning and purpose in his life: helping the youth in his community reach their ultimate potential by taking the path of higher education.

“Just one poor decision can ruin your life,” he said. “We all know this. For me to succeed, I want to come back to my tribe and make a difference. I want to help bring up those numbers and help be that difference, just be that pivotal part of somebody’s life that turns it all around for them.”