It seems the stars were aligned for Tom Frazier to live a life of paper and ink, of milestones and memories, of students and their dreams. Even he will acknowledge the ease with which new doors opened as others closed, always leading him to places that seemed to need him most.

But four decades in the printing business is a long time, and Frazier is ready to call it a night. On Dec. 31 he’ll retire after 25 years at Western Carolina University, all of those as director of printing and mailing services, where, among thousands of other things, he has ensured graduation programs were worthy of their recipients, prospective students were wowed by their WCU printed materials and university departments could send and receive their mail no matter what. 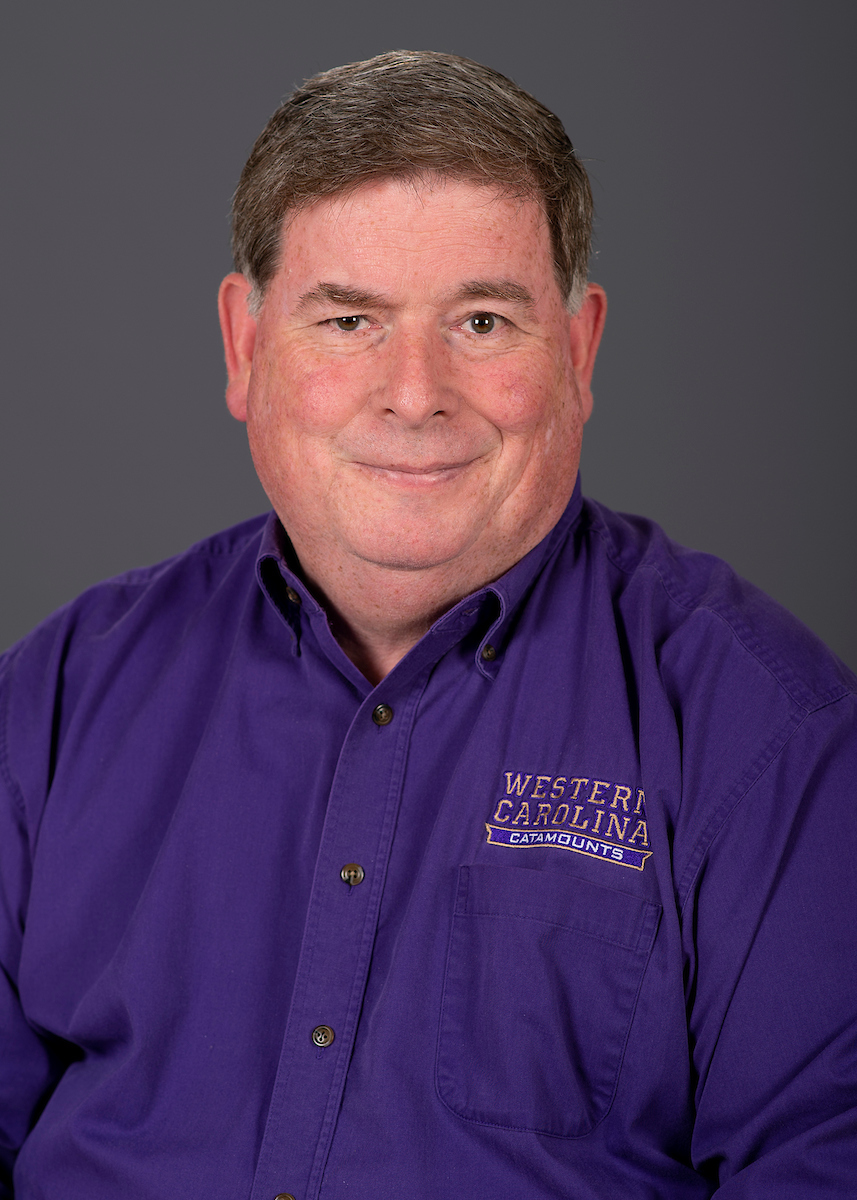 “I still enjoy the work and the profession I’m in, but after over 42 years total being in this business, I’m ready not to be called ‘boss.’ Years of making decisions for and about my employees has taken a toll,” Frazier said. “The COVID-19 environment has made work a lot more difficult. It’s put a strain on what we do and the way we do our jobs.”

Frazier, who graduated from WCU in 1979 with a degree in instructional technology, is WCU’s Alumni Spotlight for December, an honor he shares with Bill Studenc, chief communications officer and director of the Office of Communications and Public Relations, who also is retiring this month, after 32 years.

Frazier, 64, grew up in Claremont and discovered journalism when his school’s new computer system accidently put a high school freshman — Frazier — in a senior journalism class. The teacher, a newbie, told him he could stay if he didn’t give her any trouble. Frazier agreed.

A week later, she handed him a Polaroid camera and told him to figure out how to use it. He did and began taking photos for the school newspaper and yearbook, which led to a remarkable opportunity for a high school student. “They had an exchange program in Catawba County,” he said. “One day a month, they would let you out of school and you could spend the day with one of three daily newspapers – the Newton Observer, the Hickory Daily Record or The Charlotte Observer. They let you know two days ahead of time which area of a paper you would visit.” Turns out Frazier was sent to spend a day with Doug Marlette, an editorial cartoonist with the Charlotte Observer at the time, who eventually won a Pulitzer Prize for his work with the Atlanta Journal Constitution.

“As they say, once you get ink under your nails it never leaves,” he said. “I wound up editing the school paper and working for the Newton Observer and Hickory Daily Record in high school. It became part of my DNA.”

Yes, it did, dictating his life from then on out. In the fall of 1978, Frazier’s last semester at WCU, his instructional technology degree took him to the Eastern Band of Cherokee Indians’ schools to student teach, which, after he graduated that December, led to a full-time job running the high school print shop and teaching because the current manager just happened to leave to open a new business. The tribe was investing in the most modern printing equipment in the South, Frazier said, which opened new business opportunities for him and the tribe. But when the North American Free Trade Agreement was enacted in the early 1990s, the commercial printing business all but dried up, he said, with most of it going overseas. 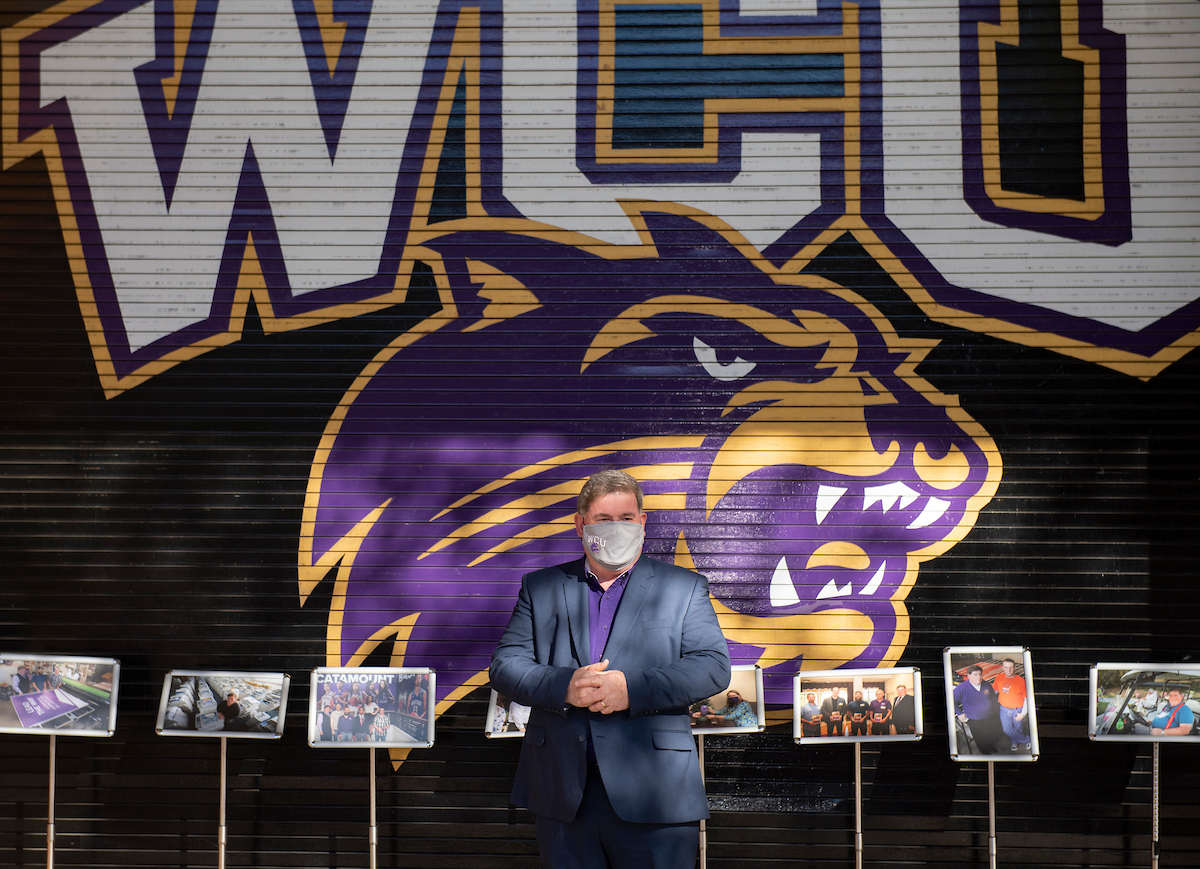 By then, Frazier had made a name for himself around the Southeast as the go-to guy for the latest in new printing technologies, and the Asheville Citizen-Times needed him. After 12 years with the tribe, Frazier left to help the paper, and its owner, Multimedia, convert from the “cold type to the electronic method” of printing papers, he said. “I was over production of what they called the downtown production office. It was my job from the time an ad was sold or the article was written, up until it hit the press, to take care of it,” he said. “I also worked with their 16 other papers to help them make the same conversion.” He was based in Asheville but traveled throughout the Southeast helping the company’s newspapers convert to the new method.

Five years later, the Gannett corporation bought Multimedia, and Frazier was told he would lose his job. While he despaired about telling his wife because he had no back-up plan, the celestial summit was already in motion and had made its move by the time he got home that night and shared his news.

“She’s sitting there reading The Sylva Herald and says, ‘Well, the guy who runs the print shop at Western, Sam Beck, is retiring,’” Frazier said. “I knew Sam from my time as a student at Western and from my time running the print shop in Cherokee, because Western was a customer of ours. So, the very next morning I went to see Sam and told him I heard he was retiring. He said, ‘Why would you want to come back here and do this?’ I said, ‘I’ve got a family to feed, and I need a job.’” 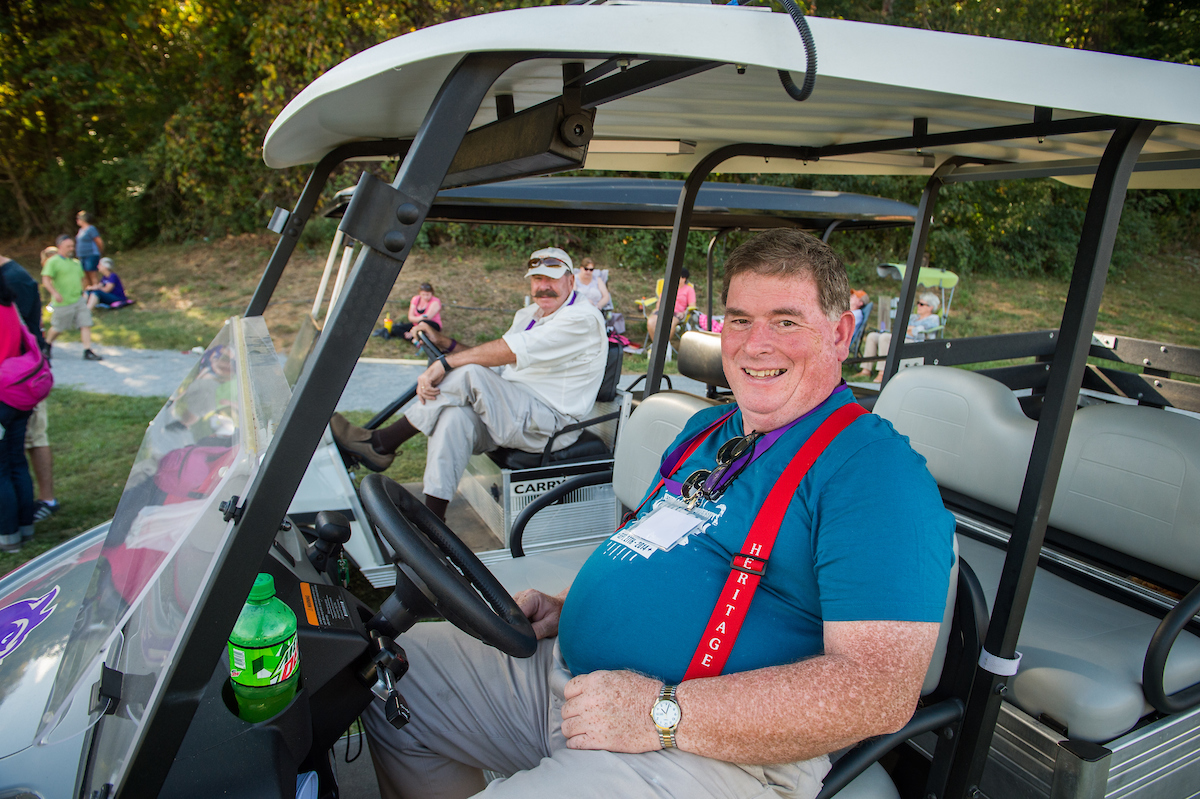 And so many others would agree. News of his impending retirement had WCU administrators and staff reminiscing about Frazier and all the good he has done for the university. Mike Langford, director of undergraduate admissions, said working with Frazier was like working with Santa. “Many times I go with my wish list of items to Tom. He goes into his ’workshop’ and then I come back to work, and it’s like Christmas morning — my wish list has turned into a beautiful product or gift,” Langford said. “I’ve worked with many printers in my years in higher education, most commercial. WCU has been lucky to have someone of Tom’s knowledge and work ethic in this role, and much of the success of our admissions events is due in part to Tom.”

“Tom Frazier is a Catamount to his core,” said Chief of Staff Melissa Wargo. “I’ve met few people who are as enthusiastic and passionate about this university. He doesn’t see the Print Shop and Print Services as supplemental to the mission of WCU; rather he sees them as a fully realized microcosm of all WCU stands for — education of our students and service to our communities. Hundreds of student workers had the good fortune to fall under Tom’s wing. He was their mentor, a proxy parent, a boss and, yes, a teacher. Tom is a good man.”

Jim Buchanan, editor of The Sylva Herald, worked with Frazier at the Asheville Citizen-Times, where he earned the nickname “Tom Terrific” for his ability to untangle difficult tasks with “humor and aplomb.” “He has also earned the respect of a generation of WCU students and staff with his work at WCU, many of whom I've known over the years, and is universally admired for his work ethic and calm demeanor,” said Buchanan, a 1983 alumnus of WCU.

But the one compliment that may hit closest to Frazier’s Catamount heart is from Chad Gerrety, associate athletic director-external affairs, who said Frazier has always gone above and beyond the call of duty to support the university’s student-athletes and their coaches whenever a Catamount team would win a Southern Conference championship. 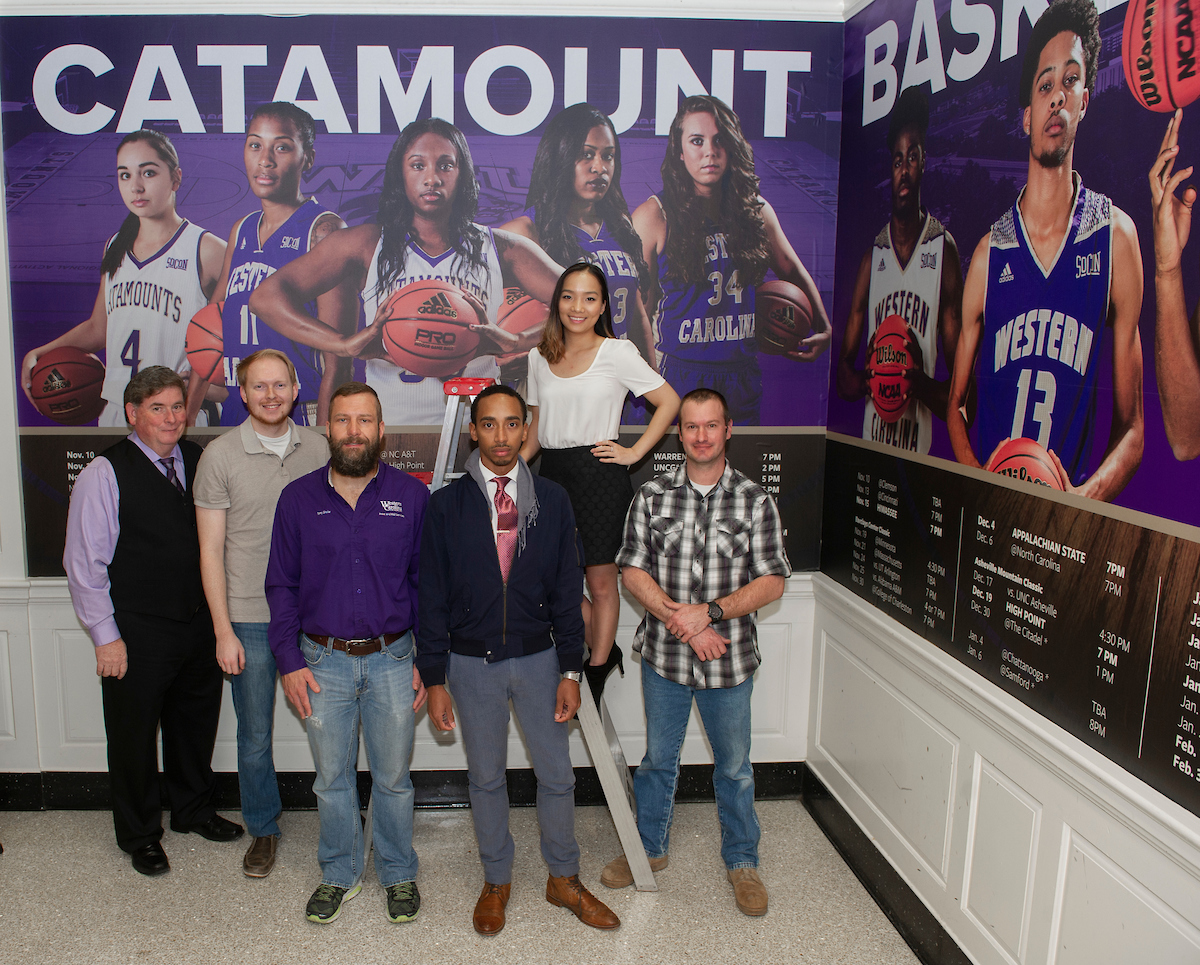 “The tradition, thanks to Tom, is to print a SoCon championship banner for the team, which often times includes a photo of the Catamounts celebrating the championship,” Gerrety said. “These are almost always a super quick turnaround. That Saturday or Sunday late afternoon, as soon as he would learn that we had won a championship, he would go into the office, design and print the banner, then install it on Catamount Gap for the team to see as they arrived back in Cullowhee hours after the victory. You can imagine the excitement of the team as they see the banner coming back into town, surely a memory the student-athletes, coaches and staff remember for a lifetime.”

And a tradition Frazier said he hopes others will continue when he’s gone. He credits his wife Vickey, whom he met at WCU when both were first-generation college students, and his two sons, Patrick and Jarrett, now grown, with helping hang the banners no matter the time of night.

It should be said that Frazier has been more than “an ink and paper guy” for WCU. He has been a keeper of sorts, of its students’ memories and milestones, and of its reputation through its printed materials. “We tell ourselves in our shop that what we do has to look better than what anybody else in the 16 state schools is doing, for somebody to think about coming to Western,” he said. “We do the best we can with the tools we’ve got and we’ve been very blessed that the university has supported us and allowed us to have some top-notch equipment and resources. And, I have a great group of people I work with who produce this stuff.”

Frazier credits WCU’s location in Western North Carolina with helping the print shop acquire its impressive heavy duty digital equipment that gives it its extensive printing capabilities. “It’s because of our geography that we’re the size that we are,” he said. “Because often, if we can’t do it, it can’t be done locally, sometimes even regionally.”

So, what will Frazier miss most?  “When you talk about things I’ll miss, it will be things like reinventing that graduation program to make it have more life, to make it more inclusive so that now it may be something that’s laid out on the coffee table or something mom and grandmom will hang on to because it tells the story of the institution their loved ones have just graduated from,” he said.

“It’s a combination of being a part of the lives of the students who work with us, seeing them come in, go through, graduate. We’ve had students who met at our shop, who didn’t know each other, that have gotten married and had kids, so we’re like the godparents of those children. We continue to enjoy following these young people as they have gone on to be successful. And honestly, that’s what it’s all about, that’s what the bottom line is. We’re here to make a difference in their lives.” 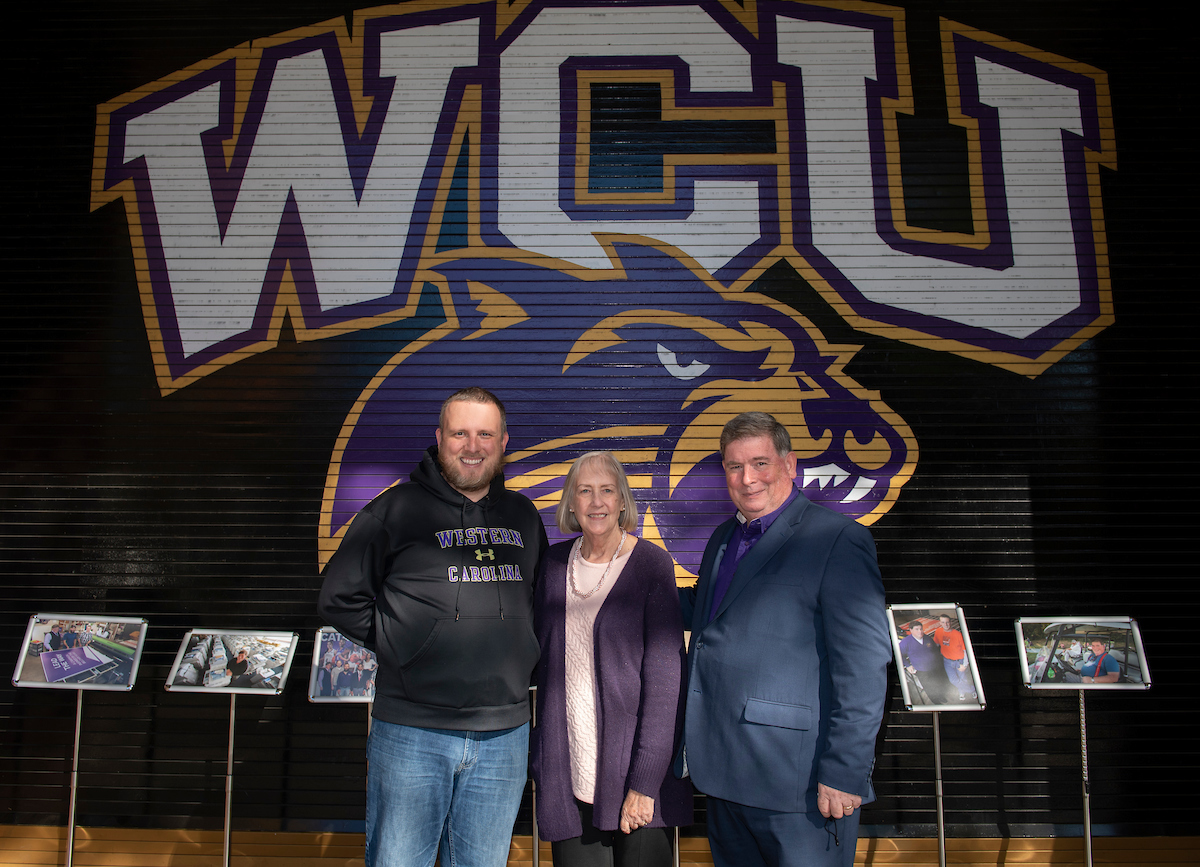 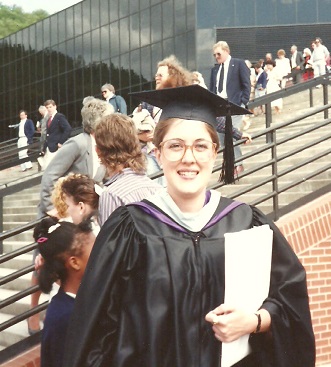 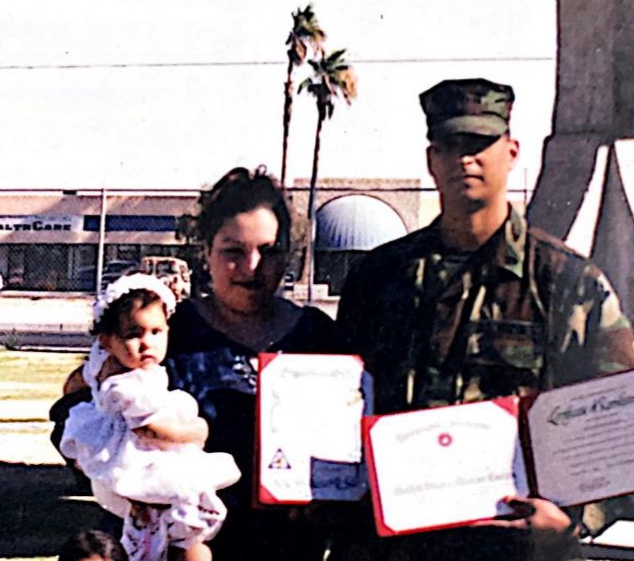 Learning leadership skills through the military and veteran community