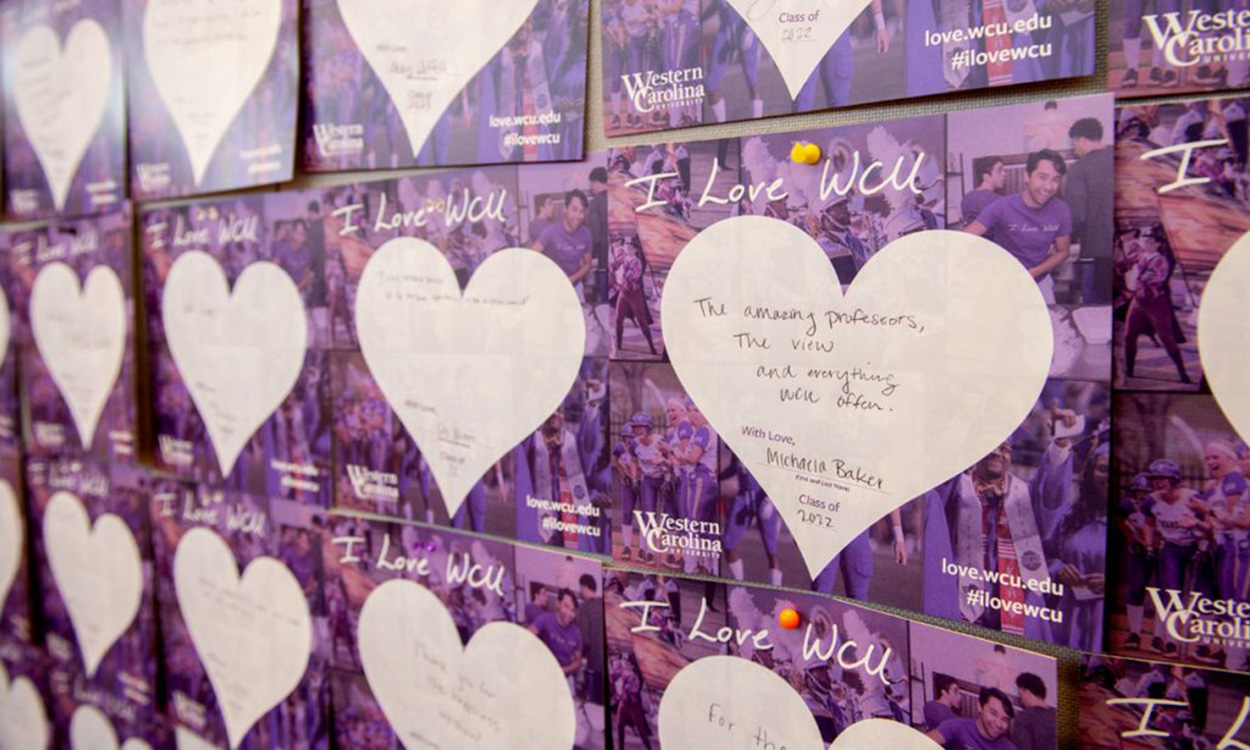 Western Carolina University is gearing up for the sixth annual public display of affection known as “I Love WCU Month,” a one-12th-of-a-year celebration of the fondness that members of the campus community have for the university.

Beginning Tuesday, Feb. 1, and continuing through Monday, Feb. 28, students, faculty, staff, alumni and friends will be encouraged to demonstrate their love for WCU through a series of special events, declarations of their feelings through messages on oversized heart-shaped cards and sentiments shared on social media, and financial contributions to help the university meet its mission to students and the surrounding region.

For the first time, this year the WCU Division of Advancement will be teaming up with the university’s Technology Commons, which is launching a new initiative in February called #checkITout to promote its program allowing patrons to borrow technological equipment free of charge for personal or professional use.

As part of #checkITout, Technology Commons is holding a contest in which people can check out equipment and use it to create something – such as a video, photograph, audio file, graphic or something else – demonstrating why they love WCU. The user-generated content will be posted on social media by Technology Commons and the university’s official social media sites by University Communications and Marketing. At the end of the month, Technology Commons will select three random participants to win either a Nintendo Switch Lite, Air Pod Pros or Echo Show.

For Ryan Cameron, Technology Commons manager, the partnership between the #CheckITout initiative and “I Love WCU Month” is an opportunity to combine his professional and personal worlds. A two-time alumnus of WCU, Cameron said that supporting “I Love WCU Month” represented the perfect opportunity to inform the campus about the Technology Commons while also doing something to give back to the university.

“The work that ‘I Love WCU Month’ is doing is important because it goes beyond dollars raised by helping people to see how special Cullowhee really is,” said Cameron, who earned a bachelor’s degree in music education in 2010. He worked as a music teacher in Buncombe County before changing career paths and returning to WCU for his master’s degree in education in 2015.

“By raising money for WCU, we have the ability to continue to put students first by providing them with all of the opportunities they need to be successful in the years after they leave the university,” he said. “The Technology Commons is trying to help students be successful while here at WCU by helping to provide all the technology they need to learn and grow as students. We also at the same time want to teach them how to use technology in a way to make their lives easier, and to be more productive students and people.”

Cameron said he is eager to participate in “I Love WCU Month” because the university is “part of the fabric of the Cameron family.” His father was the first in his family to attend WCU, graduating in 1972, and he has twin sisters who graduated from WCU in 2001. His mother took several classes at WCU when she was pursuing her job as a nurse practitioner, and his wife, a former employee of WCU’s Advising Center, earned her bachelor’s degree in Spanish in 2007 and her master’s degree in college student personnel in 2011.

“WCU has always been a part of our family for as long as I can remember. I remember seeing my dad’s degree on the wall in his office downstairs, and him talking about the fun and exciting things that he got to do as a student years ago. I remember when my sisters went off to college getting to hear about the amazing experiences they were having as students. They made friends, learned a lot and found a second home,” Cameron said. 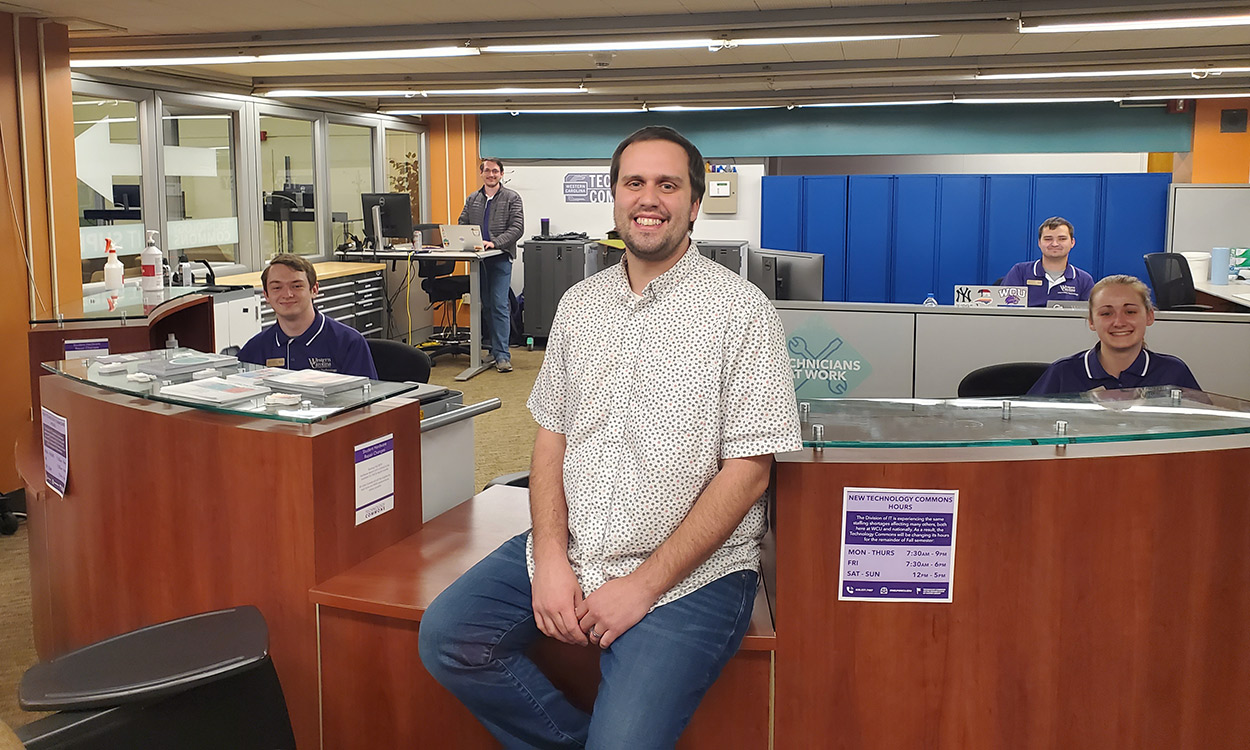 For the first time, this year the WCU Division of Advancement will be teaming up with the university’s Technology Commons to promote its program allowing patrons to borrow technological equipment free of charge for personal or professional use.

“I made some of my very best friends here and met the love of my life, Alicia. She and I attended the same campus ministry, which we still work with today. We got to ride to work together, her to the Advising Center and me to the IT department,” Cameron said. “We were both grateful for the opportunity to give back to the university that has given so much to us, and I am thankful that I am still getting to do that now.”

In addition to the partnership with Technology Commons, the Division of Advancement will host an “I Love WCU” Valentine’s Day party for students from 11 a.m. until 2 p.m. Monday, Feb. 14, at A.K. Hinds University Center, with snacks including cookies and hot chocolate. Attendees will be asked to fill out large heart-shaped paper cards with statements expressing what they love most about the university. The cards will be displayed at spots across campus for the duration of the month.

Students also will have the opportunity to show their love for WCU by joining the 1889 Club. One of four giving societies established by the Division of Advancement, the 1889 Club recognizes donors for gifts made on an annual basis to the Fund for WCU. The club, which is named in recognition of the year of the university’s founding, encompasses those who make annual gifts in amounts beginning at $18.89 for current students.

The Fund for WCU provides first-year access scholarships, and supports impact grants and ongoing stewardship efforts. The 1889 Impact Grants Program, launched in 2021, help WCU colleges, departments, and units support initiatives that align with WCU’s philanthropic priorities and further enhance the engagement of alumni and stakeholders to the philanthropic life of the university. Eleven projects were recently announced as recipients of grants in the program’s inaugural year.

The Division of Advancement will host an “I Love WCU” lunch for faculty and staff from 11 a.m. until 1 p.m. Wednesday, Feb. 16, in the Grandroom of A.K. Hinds University Center. Members of WCU’s Shetland Society, which celebrates faculty and staff annual donors at all levels, will be recognized at the event. The Shetland Society, named in honor of Shetland ponies purchased by the university in 1912 to haul supplies by cart from Sylva to campus, is intended to symbolize innovation, dedication and determination – traits that WCU faculty and staff demonstrate as a driving force through their work and their generosity, said Andrew Schmidt, director of annual giving.

The focus of “I Love WCU Month” will turn toward student-athletes and members of the Catamount Club during men’s and women’s basketball games in the Liston B. Ramsey Regional Activity Center, with special video presentations during halftime of both contests. The men’s team is scheduled to take the court at 7 p.m. Wednesday, Feb. 16, to battle Furman University, with the women set to tip off at 7 p.m. Thursday, Feb. 17, against East Tennessee State University.

For more information or to share personal “I Love WCU” stories, email or call the Office of Annual Giving at annualgiving@wcu.edu or 828-227-2868. 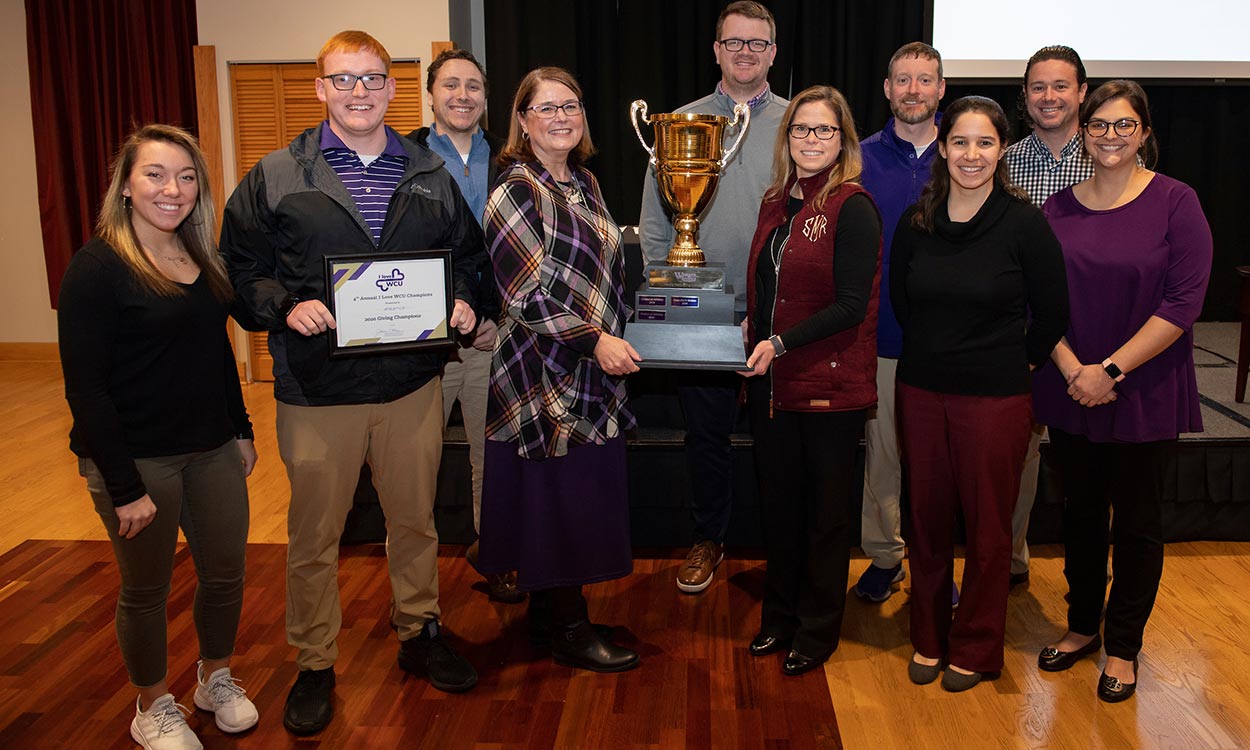