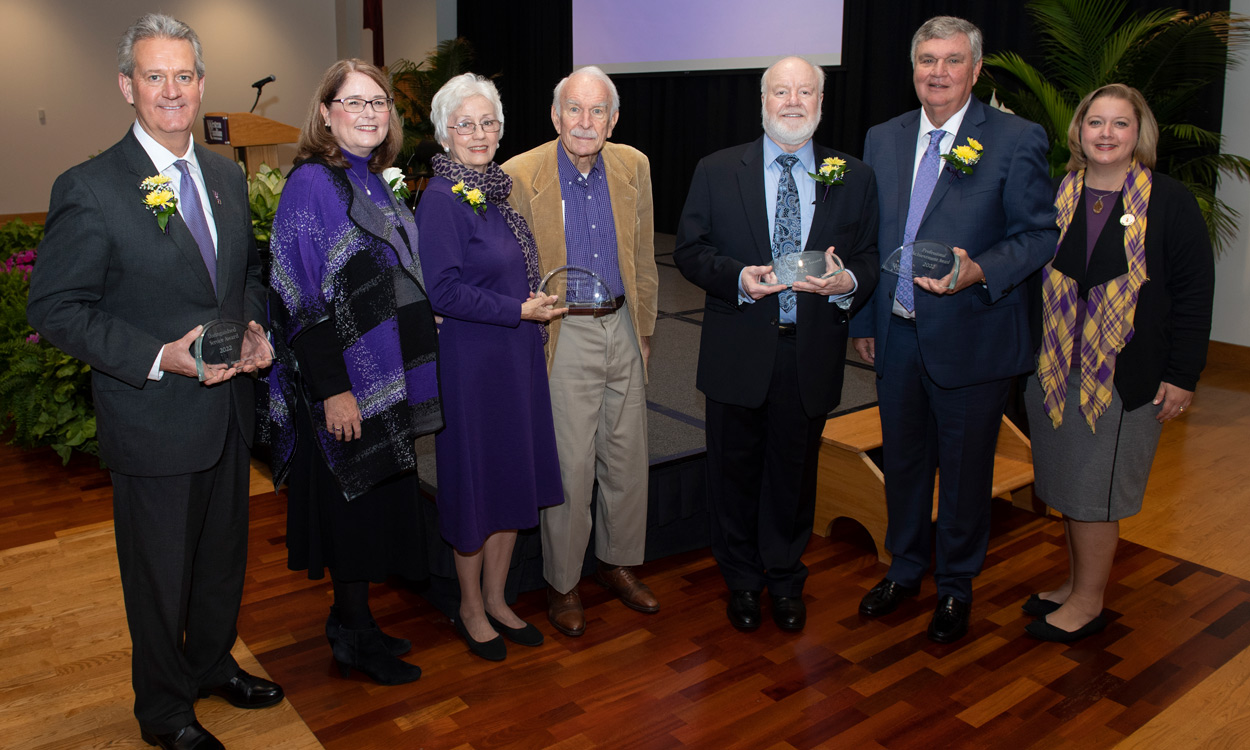 Western Carolina University’s Homecoming 2022 celebration featured the recognition of three alumni for professional accomplishments in college football coaching, sports performance nutrition and academic excellence, and the contributions of a husband-and-wife team with an extensive record of public service and the man who oversaw WCU’s alumni activities for nearly 20 years.

Brown presented one Distinguished Service Award to couple Phillip Haire, a former state legislator who was a driving force behind WCU’s Health and Human Sciences Building and the N.C. Center for the Advancement of Teaching, and spouse Connie Haire, a WCU alumna, retired Southwestern Community College vice president and ceaseless community volunteer.

A captain in the U.S. Air Force, he was a member of WCU’s Board of Trustees from 1992 until 1998 and served for 12 years on the University of North Carolina System Board of Governors. He was Sylva’s town attorney for 27 years, and was an attorney on the Select Committee on Presidential Campaign Activities, better known as the Watergate Committee, in 1973-74. He also is among the founding members of the Catamount Club, serving as its president from 1970 until 1972. He is a former member of the N.C. House of Representatives, representing District 119 (Haywood, Jackson, Macon and Swain counties) from 1999 to 2013.

With a master’s degree in education from WCU in 1984, she joined the administration at SCC as director of resource development in 1986 with later roles of dean of institutional development, vice president for student and institutional development and vice president of the college’s Macon campus. She was executive director of the SCC Foundation for her entire career at the college. She has served on numerous regional boards and chaired many of them. A member of the WCU Foundation Board of Directors, she previously sat on the WCU Alumni Association’s Board of Directors and was chair of WCU’s Friends of the Arts board.

The Haires have made more than $250,000 in contributions and pledges to WCU, including a gift of $100,000 in 2017 establishing the endowed scholarships for students in the College of Arts and Sciences, College of Fine and Performing Arts and School of Music.

The second Distinguished Service Award went to Marty Ramsey, the longtime face of WCU alumni affairs who literally grew up on the Cullowhee campus and served as director of the Catamount Club and alumni engagements, including one year leading both offices simultaneously. Ramsey retired earlier this fall with 28 years of service.

A 1985 WCU graduate with a bachelor's degree in business administration, Ramsey and his family moved to Cullowhee in 1964 when his father, Harry Ramsey, who later served as assistant to the chancellor for WCU programs in Asheville, accepted a faculty position. His mother, Sue Ramsey, worked as a “dorm mother” in Robertson Hall, where he and his sister lived in the family’s ground floor apartment during much of his childhood.

Ramsey has served as a member of Catamount Athletics Hall of Fame Committee for 28 years and the Chancellor’s Leadership Council for 10 years, and co-chaired the University Homecoming Committee for 20 years. In his role as alumni director, he helped introduce three WCU chancellors (John W. Bardo, David O. Belcher and Kelli R. Brown) to alumni across the Southeast and oversaw the Alumni Association Board of Directors. He also established alumni engagement traditions including the annual Purple & Gold Reunion, Legacy Pinning Ceremony and Alumni/Student Job Shadowing Program.

The Young Alumnus Award went to Joey Blake, a 2012 graduate of WCU with a bachelor’s degree in nutrition and dietetics who is director of performance nutrition and wellness for the National Football League’s Los Angeles Rams. In his sixth season with the defending Super Bowl champion team, Blake is responsible for educating and directing all players on their nutrition and hydration related to health and performance.

Prior to joining the Los Angeles Rams, he served as director of football nutrition for the University of South Carolina from 2013 until 2016 as the first full-time football-only sports dietitian in collegiate athletics. A native of Long Island, New York, Blake grew up in Canton. After graduating from  high school, he worked at the U.S. Attorney’s Office in Asheville for a brief stint before enrolling at WCU. He was among the L.A. Rams players, coaches, and staff members receiving Super Bowl rings in July.

Hinson presented the Professional Achievement Award to Paul Johnson, a 1979 graduate with a bachelor’s degree in physical education who is widely regarded as one of the most innovative football coaches in college football. Johnson retired as head coach at Georgia Tech in 2018 after 11 seasons, a stint including nine bowl game appearances, three bowl wins, three Atlantic Coast Championship games and 82 victories. In addition to being named ACC Coach of the Year three times while leading the Yellowjackets, Johnson was selected 2008 National Coach of the Year by CBS Sports.

Before joining Georgia Tech, he was head coach at the U.S. Naval Academy for six years, guiding a program coming off the worst two-year stretch in its 123-year football history to winning seasons and five bowl game appearances. He was named Bobby Dodd National Coach of the Year in 2004. His head-coaching career began with five seasons at then-Southern Conference member Georgia Southern, where his teams won five-straight conference titles and two NCAA Division I-AA national championships. In his five seasons at Georgia Southern, he was named the Division I-AA National Coach of the Year four times. A native of Newland, and his wife, the former Susan Propst, a 1980 WCU graduate, live in Linville.

Lifelong educator J. Allen Queen, who received his bachelor’s degree in 1973 and master’s degree in 1974, is recipient of the Academic Achievement Award. The first member of his family to finish high school and attend college, Queen has been a classroom teacher, school principal, college professor and administrator during his 40-year career as an educator. Much of his teaching, research and academic service integrated into the areas of business, industry and government, and he has published numerous books and articles on those topics.

Queen spent the last half of his career as a professor at the University of North Carolina at Charlotte, where he served as chair of the Department of Educational Leadership, retiring in 2014 and now holding the title of professor emeritus. His first major publication was a journal article titled “A Workshop on Childhood Abuse and Neglect,” co-authored with wife Patsy Short Queen, who has bachelor’s degrees in education and nursing. The impact of the article and a series of radio and television presentations and related workshops throughout North Carolina conducted by the Queens brought about major changes in local and state laws regarding suspected cases of childhood abuse or neglect. The two, who now live in Kings Mountain, met two weeks into his first semester at WCU. 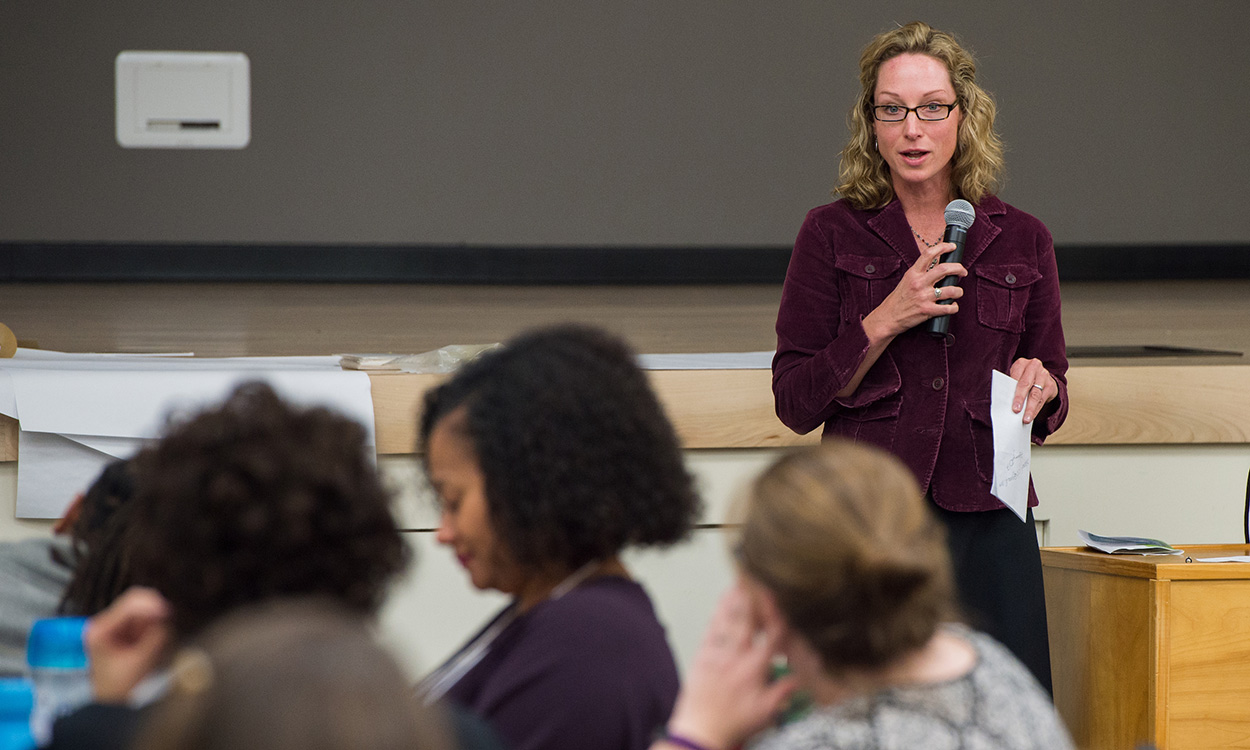 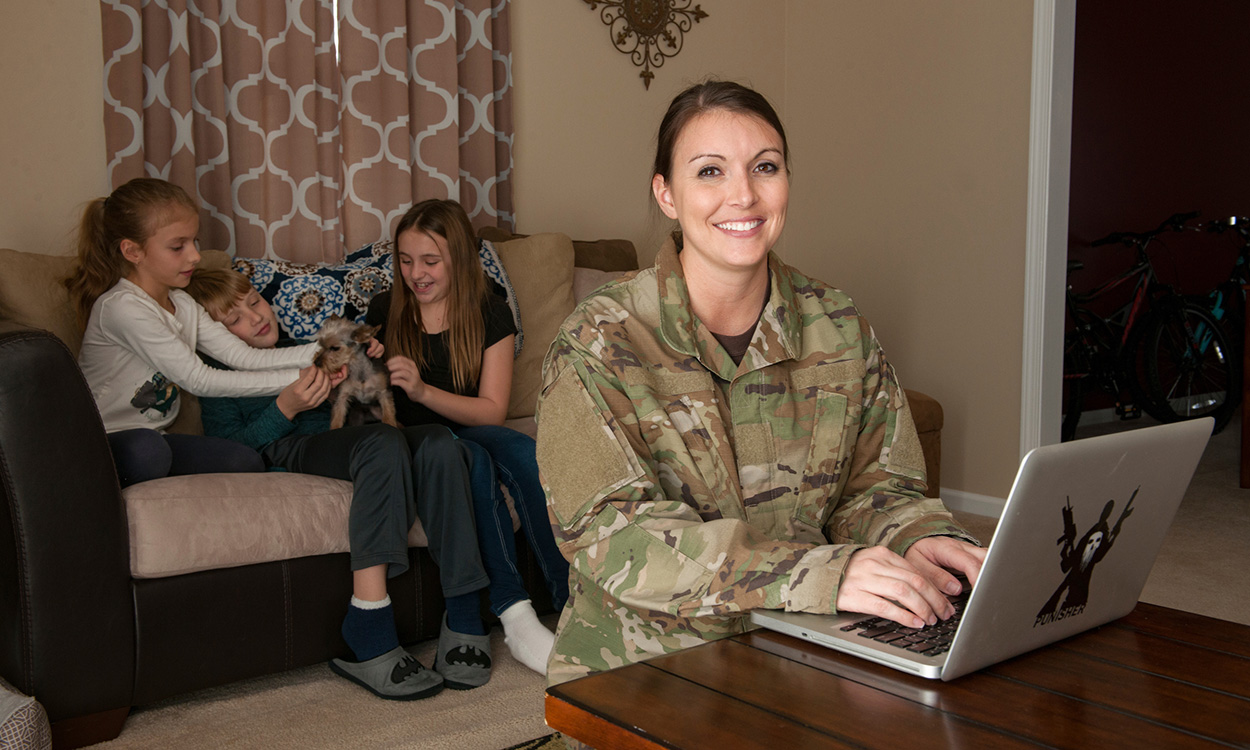 WCU ranked by US News and World Report for online undergraduate, graduate programs