While much of the world came to a screeching halt over the past year because of the COVID-19 pandemic, benefactors of Western Carolina University did not allow a global health crisis to stand in the way of their ongoing philanthropic support of students in pursuit of higher education.

That was the theme as more than 250 supporters, scholarship recipients and other friends of WCU came together Thursday, Oct. 28, for a celebration of the impact of philanthropy on the lives of students. 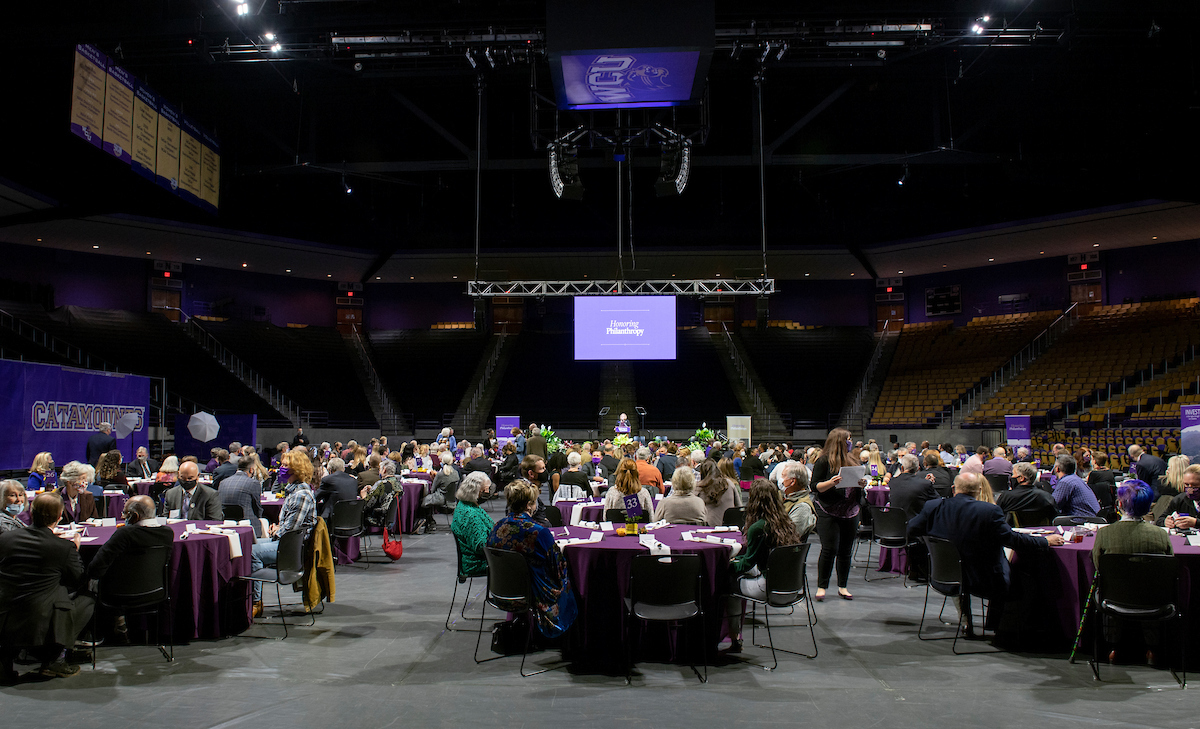 The annual event, held in the Liston B. Ramsey Regional Activity Center, marked the first time since 2019 that benefactors were able to break bread with student recipients of scholarships established through their financial gifts.

Despite the challenges of the 2020-2021 academic year, WCU’s friends and donors provided ample reason for the university to celebrate – to be specific, make that 9 million reasons, said Jamie Raynor, WCU vice chancellor for advancement.

Raynor asked the donors in the crowd to think back to the reasons they established scholarship funds for WCU students.

“Many of you created them to honor or celebrate a family member, friend or favorite professor. Others remembered loved ones who are no longer with us through the creation of a scholarship. Some alumni give to scholarships to pay it forward to students who are in the same program or sport that they were in,” she said.

“But, I feel confident that all scholarships were created to provide help to a student in need, to encourage a student along their higher education journey, to reward a high-achieving student and to overall lessen the financial burden of our soon-to-be graduates,” Raynor said. 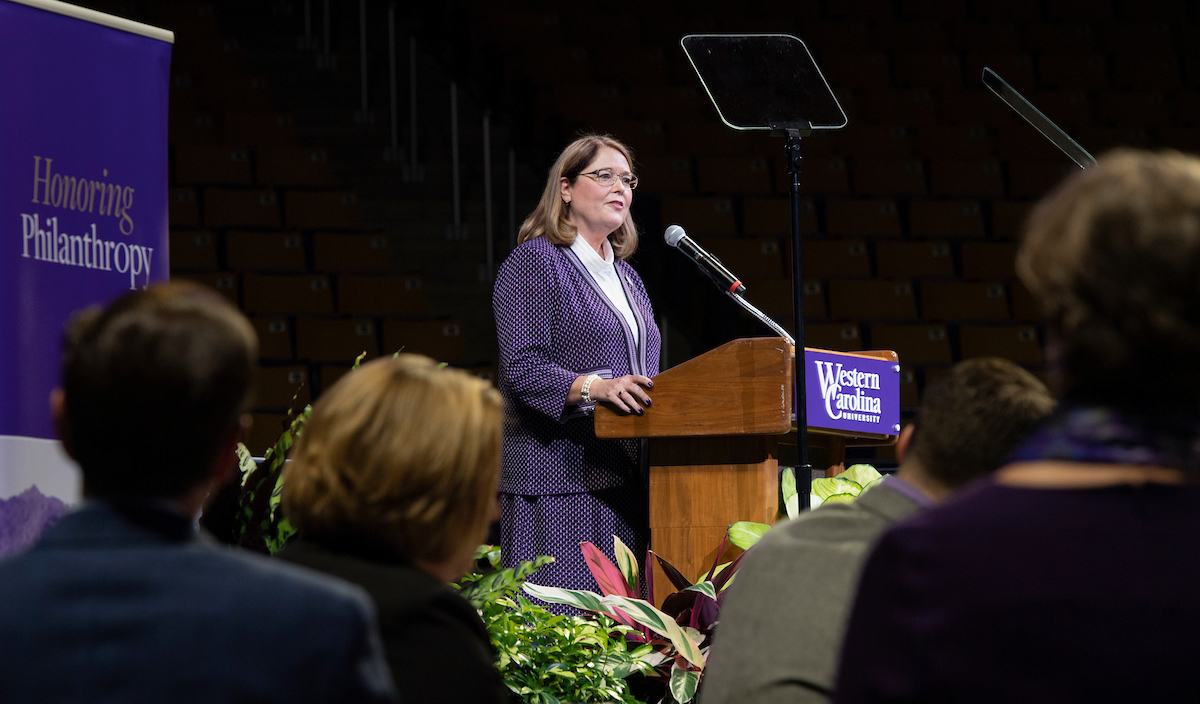 Chancellor Kelli R. Brown, who often has shared how the financial support provided by scholarships helped enable her own educational pursuits, also had a request of donors in attendance, asking them to remember that the scholarship recipients at their tables represent the future.

“They will run businesses, design buildings, solve crimes, heal the sick, feed the poor, educate children, unlock mysteries of the past and develop solutions for regional and community challenges. They will become leaders in our communities, our region, our state, our nation and, yes, even our world,” Brown said. “Down the road, when they reflect on just how far they have come, they will remember this place – Western Carolina University. And they will remember you because of the impact that your generosity has had on their lives.”

Directing remarks to scholarship recipients, Brown urged the students to think about their benefactors as “people who truly understand the immense power of a university education.”

“These wonderful donors are so convinced that education has the power to change lives for the better that they have been inspired to give back to this university in the most significant and lasting way possible – through financial contributions to establish an endowed or annual scholarship,” she said.

Benefactors also heard from several student recipients of scholarships they helped establish – including five performing as members of the Balsam Mountain Brass Quinet and two making remarks from the stage.

Speaker Malcolm Skinner, a senior from Brooklyn, New York, is studying nursing as recipient of the David E. W. Schlosser Endowed Scholarship, following in the footsteps of parents who worked in the medical field.

“Since high school, it has been my dream to become a nurse to care and inspire as many people as I can. College was a necessary pathway for me to take to achieve my dream,” Skinner said.

“With the generosity and support of donors including Mike and Rebecca Schlosser, I’ve been able to focus on chasing my dream here at Western Carolina University,” he said. “The support my fellow students and I have received from the donors reassures me that there are people out there who have faith in us, and see that we have a promising future to make this a better world.”

“Without the support of scholarships, I would not be able to attend Western as an out-of-state student. I also come from a family of three sisters, one of which is also currently in college, and so the generosity of donors to the school alleviates many financial worries for me and my family,” Patton said.

“The knowledge that there are people who are generous enough and giving enough to contribute money and time to support young people’s futures is both encouraging and inspiring, so thank you to the Whiteheads, the Brinsons and all the donors who are help make it possible for us to be here,” she said. 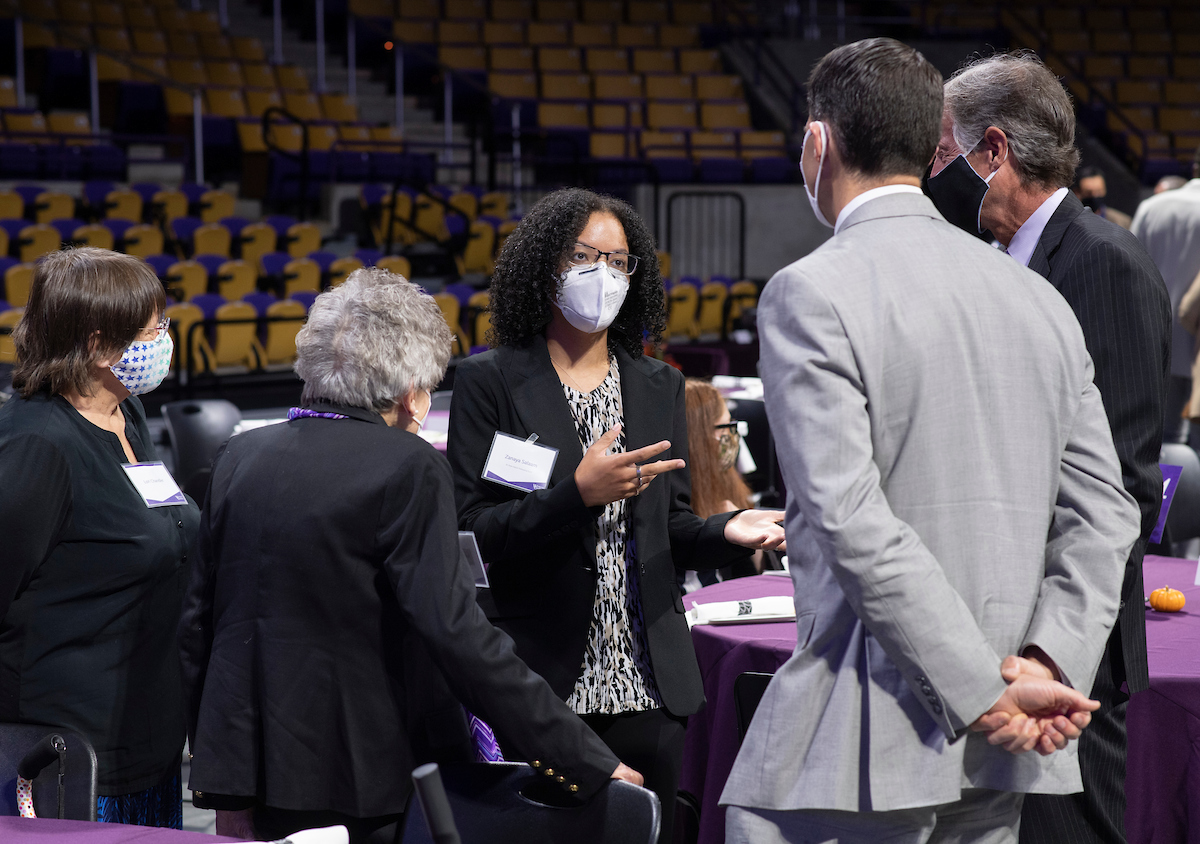 Pat Kaemmerling, former chair of the WCU Board of Trustees, delivered the keynote address, speaking from the perspective of someone who has received scholarships during her time as a WCU student and someone who has contributed to scholarship funds.

For all of the formal remarks emanating from the stage, much of the raw emotion of the afternoon took place at the individual tables where student scholarship recipients met their benefactors – most of them for the very first time.

At one table, smiles – and perhaps even a tear or two of joy – were evident despite the face coverings required by WCU’s Catamounts Care COVID-19 protocols as Daniel Gilbert and wife Linda, a 1970 WCU alumna who studied elementary education, chatted with three student recipients of a fund they created. The Gilberts, members of the Cullowhee Society, established the Linda Hudson Gilbert Scholarship Fund to support students in the College of Education and Allied Professions.

Robert Holquist, who retired in 2011 after a long career as director of choral activities at WCU, expressed delight at meeting the recipient of a scholarship fund created by colleagues and students in his honor. Holquist, who even in retirement still keeps his thumb on the pulsebeat of activities of the School of Music, also expressed a bit of professorial concern.

“Are you missing a rehearsal to be here for this event? Isn’t there a recital tonight?” he asked student Valeria Raymond, a sophomore music major from Myers Park High School in Charlotte and member of WCU’s Concert Choir.

“Yes, that’s why I have to leave early after lunch,” Raymond said. “We have rehearsal starting at 1:45 p.m. today and our performance tonight.”

Holquist pledged that he would do his best to be in attendance to watch the recital scheduled for 7:30 p.m. later that day 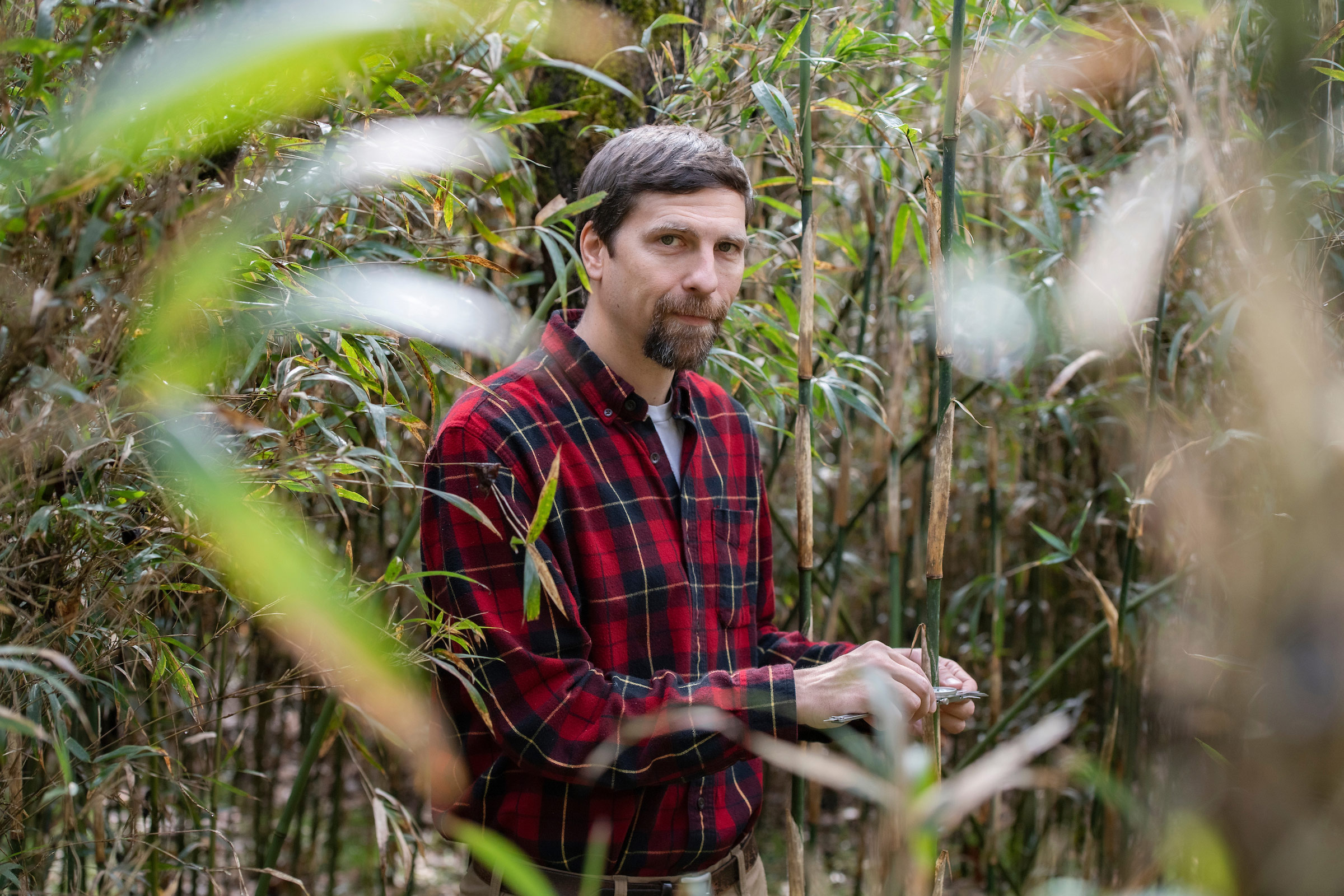 Marianne Leek Alumna of the Month