As a high school student in Bryson City, Sandi McCracken already had a head for business and a desire to follow in her mother’s footsteps. But momma knew better – or so she thought.

“My mother was in banking for 37 years,” said McCracken, who established the Sandra Jayne McCracken Endowed Scholarship to help worthy Western North Carolina students attend Western Carolina University. “I wanted to go into banking, but she didn’t want me to because she said it was too time- consuming, too many hours, too hard and there was a glass ceiling for women. I said, ‘Ok, I’ll be a teacher.’ She thought an education degree would be good if I ever had children.”

But McCracken couldn’t quite shake her first love, and she graduated from WCU in 1965 with a bachelor’s degree in business administration with a concentration in math and finance and what amounted to a minor in education. Her first job out of college was teaching math and business in Orange Park High school, in Clay County in Florida, where she spent most of her 45 years in education. (She turned down a job with Wachovia Bank in Asheville to take the teaching job in Florida.)  She also coordinated the county’s GED program, served as a vice principal and eventually retired as the assistant superintendent for business affairs.

McCracken, 75, said her business education paid dividends, despite her mother’s well-meaning attempts to redirect her career plans. “When I was growing up in high school, my mother put me in her bank to work in the summers, and that’s how she was trying to turn me off of banking. They put me in a back room posting. We did manual postings then. They let me do that until noon, and then in the afternoon, when they closed at 1 p.m., I’d go back to the front and file checks and get them ready for bank statements. I never saw anybody. I was too outgoing to be locked up like that, and I hated it.  She thought that would be enough to turn me off, but I knew I could find me a job where I could meet the public.”

McCracken as the editor of the Catamount Yearbook, 1965

McCracken’s determination to forge her own path was helpful once she entered college, knowing business would be her degree of choice. McCracken said her business professor, J. Floyd Cunningham, who was chairman of the business department and had taught her in high school, warned her that obtaining a business degree would be too difficult because most of the classes were scheduled off campus to accommodate Vietnam veterans and employees of area businesses seeking a business administration degree, most of whom were men.

“He said, ‘Well Sandi, I don’t think you can do that,’” McCracken recalled. “’You’ll have to take all these classes with the veterans and go to Canton to Champion and take the Saturday and evening classes.’ In other words, there was a glass ceiling there, too.”

But McCracken persevered – she says it was her “I’ll-show-you attitude” – using the experience to help shape what she wanted to do with her life as a woman in the banking world, a world she longed to be a part of since watching her mother work as a cashier for most of her career before finally getting a promotion. “I saw all these people who went to fancy meetings, and they had a board of directors and all that stuff and I thought I’d be able to advance,” she said. “At that stage, the women were not advancing very rapidly. I thought I could be a part of that change.”

Once at WCU, McCracken started making a name for herself as a can-do student. She was elected editor of the Catamount yearbook and served as president of Delta Zeta sorority. She played sports and worked on the college newspaper.

But she also was aware of the social inequalities that surrounded her. “I knew that women didn’t go as far or advance as much as they could and somehow that got imbedded in my thinking,” she said. “And also, the other thing you saw growing up in the mountains was preferential treatment, even in families. If there were only two kids in a family and one could go to college and there was a boy, that’s who they picked. It’s not a bad thing. I don’t mean to cast dispersions, but that’s just the way things were.”

McCracken said growing up in small-town Bryson City as an only child – she had one half-sister who was five years older – helped her develop the confidence and strength to follow her own path, despite the road blocks.  She hopes her Sandra Jayne McCracken Endowed Scholarship, which gives preferential consideration to Swain County students, will help others work for more equal opportunities for women.  “I was a class officer in high school,” she said. “In a small school you get to be everything. I had a really great time. But I was bound and determined I was going to change this world, make it something I could work in and work my way to the top, and I did. I’ve been very fortunate. I think that’s the reason I’m so interested in Western and getting these scholarships to students. I think somebody going into education has a better opportunity to make a change.” 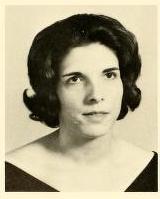 McCracken’s enthusiasm for WCU college life hasn’t waned in those 50 plus years since she was a student. She currently serves on the WCU Foundation Board and attends the WCU Foundation Scholarship Luncheon to catch up with students who have received her scholarship. “There are so many kids who can’t find a way to pay for college, even with a little help financially,” she said. “I had lunch with two of my scholarship recipients last year, and when you’re there to help and you get to talk to them and encourage them, that makes a whole lot of difference. That’s what it’s all about.”