Made in NC: WCU and Jackson County share deep connection 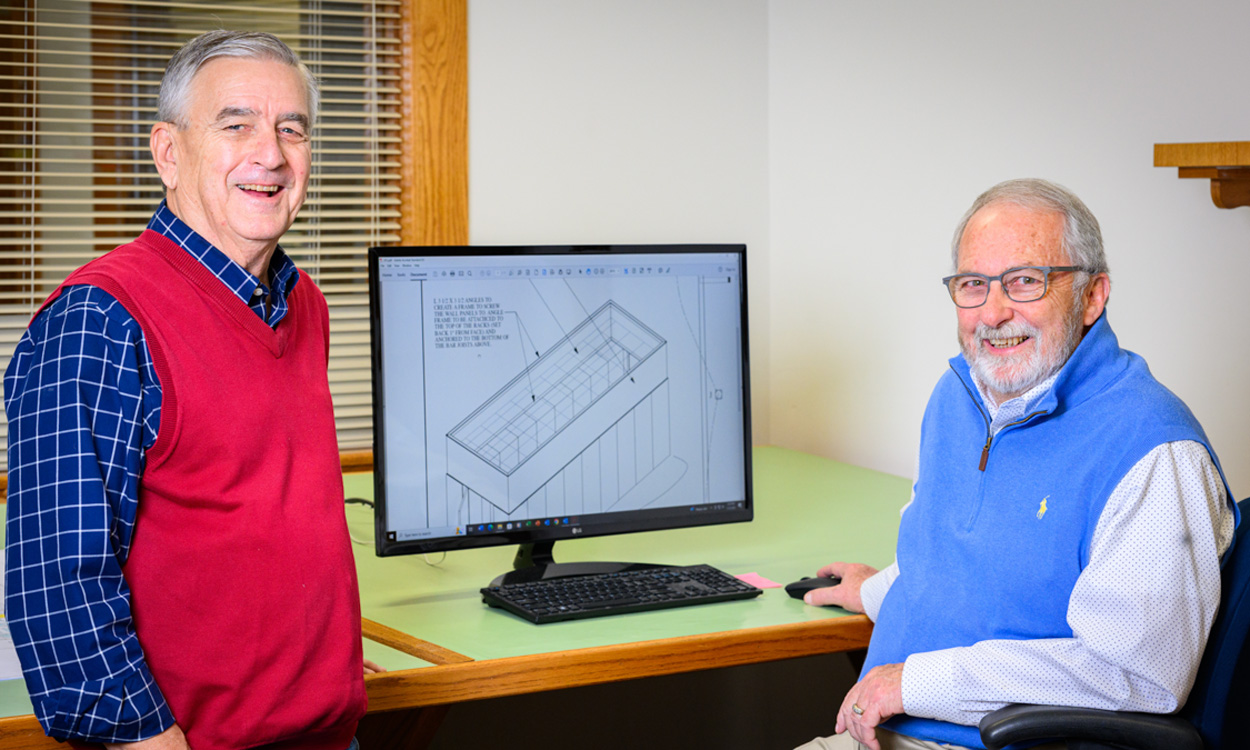 Roger Bartlett (left) and Don Hensley owned and operated Western Builders in Sylva for 50 years before retiring at the end of 2022.

Nestled in the mountains of Western North Carolina sits Jackson County and Western Carolina University; a county and a school so intertwined it would be hard to talk about one without mentioning the other.

Just ask Tiffany Henry, economic development director for Jackson County and a 2003 alumna of WCU who earned her degree in business administration and law from the College of Business.

“You would be hard pressed to find a business in Jackson County that hasn’t been touched by WCU in some capacity,” Henry said.

The feeling is echoed among many business owners in the county, particularly those run by alumni of the university who have made a living in the town where they went to school, and in some cases, grew up in.

Founded in 1851 by carving land from two neighboring counties, Jackson County has a population of a little more than 43,000, with the county seat located in Sylva, about seven miles down the road from WCU.

The university was established nearly 40 years later in 1889 and its student population of nearly  12,000.

“It all started with a skill saw,” said Don Hensley, co-founder and owner of Western Builders and a 1972 graduate of WCU who earned a marketing degree.

Hensley and Roger Bartlett founded and owned Western Builders for 50 years, beginning their partnership in 1972.

“While working on a jobsite together, Roger and I decided why not start our own construction business where we can work for ourselves?” said Hensley.

Although initially a residential contractor, by 1976 they were already transitioning into commercial construction, and by 1980, they were working exclusively on commercial projects.

Hensley and Bartlett, who retired at the end of 2022, credit the university with being very supportive of their construction business and hiring their crew to complete several on-campus construction and renovation projects over the years, including the chancellor’s suite in the H.F. Robinson Administration Building at the entrance of campus.

Looking back over their years of owning and running a business in Jackson County, both Hensley and Bartlett share the sentiment of a close-knit community, the strong connection between the people and the university, and the lifelong friendships made.

“When we were first starting out, many of the local businesses allowed us to have a charge account and knew that we would make good on our promise when we started earning a profit,” Bartlett, said.

Hensley said “a firm handshake and your word was as good as a contract” during those early years of starting out.

Asked what they would miss the most, both Hensley and Bartlett said it would be the people they have met and worked with.

From a skill saw and two people, to commercial equipment and a staff of more than 30, Hensley and Bartlett set out on their own path and built one of the most well-respected businesses in Jackson County while being intimately involved in every construction project their company was a part of.

What the owners of Western Builders described about Jackson County is the very essence of what makes up the culture of WCU: a close-knit community built on the foundation of making connections that span across decades, no matter the distance or amount of time that has passed, everyone is always welcome to come home to Cullowhee.

Speaking of home, Renee Beutell, a 2008 alumna who owns Wolf Creek Tree Farm, located in Tuckasegee with her parents, has called Jackson County home all her life.

“WCU is such a great school and the fact that I didn’t have to leave to get my degree was wonderful,” she said. “I love this area and had no desire to leave then and still don’t.”

Renee Beutell and her parents own Wolf Creek Tree Farm in Tuckasegee.

Beutell went to Asheville-Buncombe Technical Community College in the ’90s and then went to WCU from 2006-08 to complete her degree in entrepreneurship from the College of Business.

“My dad encouraged me to get the business side of my education from WCU and my parents taught me the farming side,” Beutell said. “What I learned at WCU has served me and my family well with the tree farm.”

Wolf Creek Tree Farm was founded in 1949 by Thomas C. Beutell and his wife Joan A. Beutell.

The Beutells established the first plantings of Fraser Fir to be grown exclusively as Christmas trees and had some of the first privately held seed orchards to produce quality trees through genetics. They were also instrumental in helping to establish the North Carolina Christmas Tree Association.

From alumni that are quite literally building and growing their businesses, to now looking at two alums that are crafting things by hand in their Jackson County businesses, WCU’s alumni are a testament to what it means to be “Made in NC.”

Timm Muth, director of the Jackson County Green Energy Park, earned his master’s degree in engineering from the College of Engineering and Technology in 2016. Muth understands the importance of bringing the classroom to life through hands-on experiences, especially those involving combustible materials.

“About a decade ago, I reached out to WCU to see if I could take a few courses in engineering to gain a deeper understanding of gas and fluid flows, and the next thing I knew I was talked into getting my master’s,” Muth said. 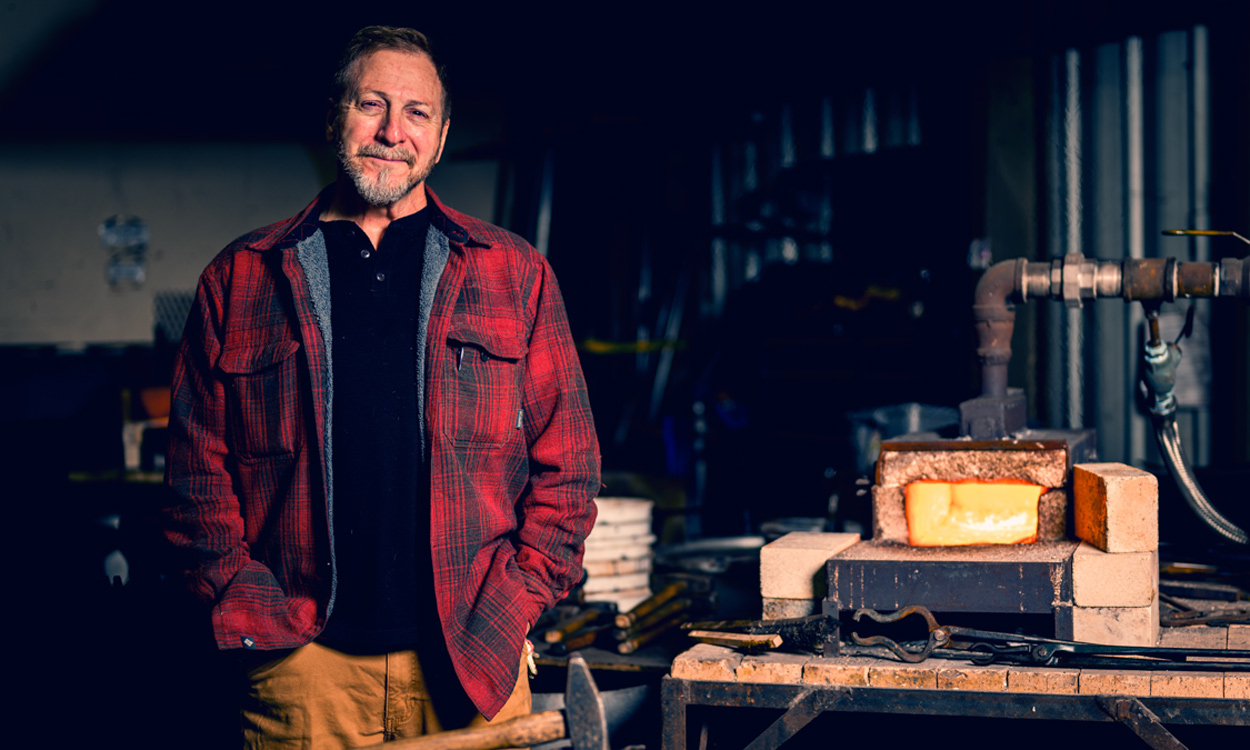 Jackson County Green Energy Park director Timm Muth is pictured inside one of the studios at the park.

While Muth was in school, he began teaching a few material science courses at WCU and loved getting to interact with the students and share with them unconventional ways to understand thermal dynamics, which included things like glass blowing.

“You can’t set a fire on a college campus, so for the students to be able to come to our facility allows them hands on experience that they aren’t going to get from a lecture alone,” Muth said.

The Jackson County Green Energy Park, located in Dillsboro, captures methane gas from the old town landfill, then uses the gas as fuel for a series of artisan studios that includes glass blowing, blacksmithing and ceramics.

“About 90% of the staff here are WCU graduates and we have had tons of WCU interns over the years,” Muth said.

Muth shared that he recently received two phone calls and ran into a former intern at the Innovation Station tap room in Dillsboro and that all three were now working for Corning Inc. in glass science.

“I started out as a nuclear scientist,” Muth said. “I have really come full circle now getting to work with renewable materials.”

Switching gears from heat to something sweet, Steve, Beth and Lauren Baxley of Baxley’s Chocolates, located in downtown Sylva, shared their journey of coming to WCU in the 1980s to creating chocolates in their Main Street shop.

“We moved to Cullowhee in 1980 and I spent several years working in residential living and finished out my career at WCU in the Advising Center as associate director until my retirement in 2014,” Steve Baxley said.

Even though Steve was working full-time at WCU, the confectionary family business has been part of the Baxley’s lives since his father Russell, a food scientist, worked to develop new food products and brought Steve in to help create chocolates during family gatherings and holiday breaks. 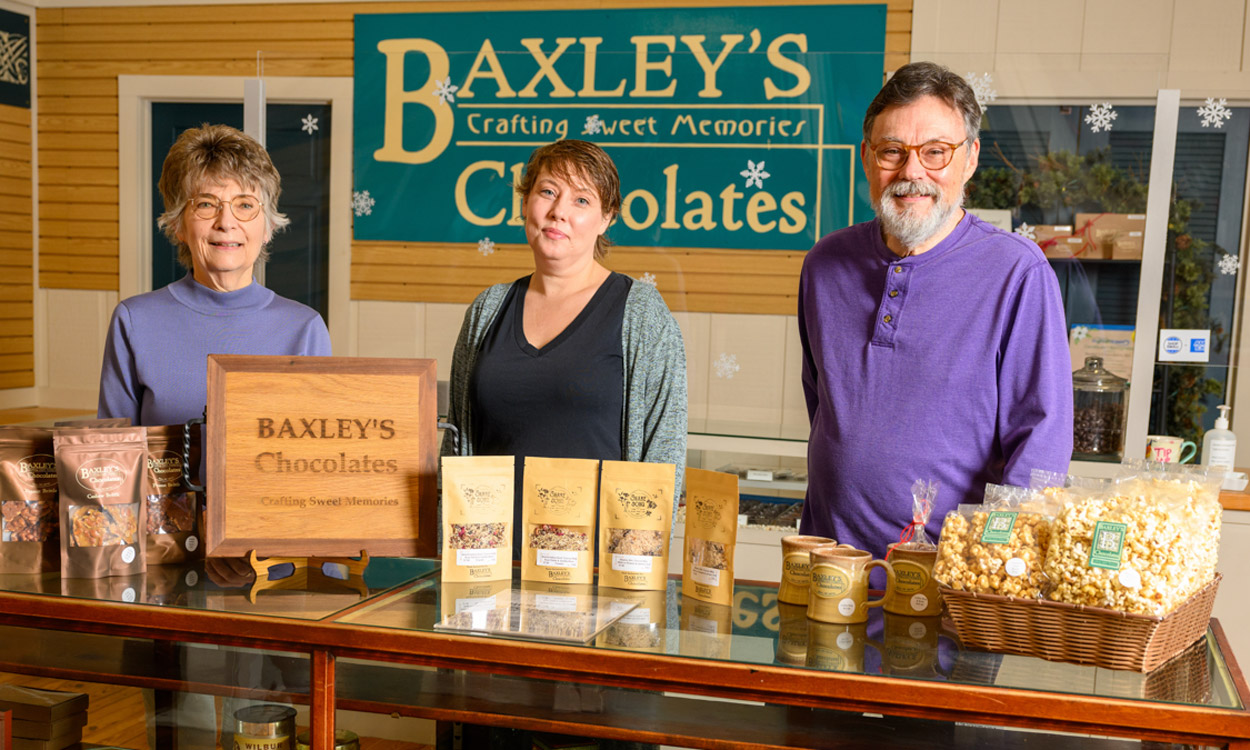 From left to right: Beth, Lauren and Steve Baxley pictured in their downtown Sylva chocolate shop.

Russell and Steve continued to experiment with the chocolates, and they began selling their sweet treats at WCU’s annual holiday craft show with the help of Beth and Lauren. They continued to sell chocolates for seven years. At that time, they operated under the name “The Three Bears.”

In addition to Steve working at WCU and the holiday craft show, Beth and daughter Lauren have even stronger ties to WCU – they are both alums.

“When we moved here in 1980, it was for two reasons,” Beth Baxley said. “The first reason was because Steve found a job in his field with his new master’s degree in educational administration, and the other reason was I wanted to get a master’s degree in communication sciences and disorders and become a speech language pathologist. WCU offered both.”

Over the next two decades, Lauren also went on to earn her degree from WCU in business administration and law in 2003. Steve and Beth continued to make the chocolates in their spare time as gifts for friends and family.

“I think the biggest thing I learned at WCU was my love of numbers,” Lauren Baxley said. “I had convinced myself that I was not very good at math until my first statistics class at WCU. I was fortunate enough to have several professors who taught in a way that made everything click and one of my least favorite subjects soon became a fun challenge. I absolutely love the accounting, reporting and payroll aspects of my job now.”

The chocolates had always been well received and they thought maybe a retail store might be the next step, as it had not seemed practical to do so before that time.

After retiring, Steve and Lauren worked with Henry, who at that time was the director for Southwestern Community College’s Small Business Center, to start planning the business.

Steve completed Ecole Chocolat’s Professional Chocolatier and Business Planning programs and in October 2015 they were able to open their retail store in Sylva.

“I spend most of my time in our shop in the production area, but the most rewarding part of my work is when I get to talk to our customers and learn what they like about chocolate, listen to their stories about their chocolate discoveries and hear how our chocolates have helped them in crafting ‘sweet memories,’” Steve Baxley said.

In March 2018, the Baxley’s expanded their shop to a larger location on Main Street where they reside today.

“I worked on the housing paint crew while I was a student at WCU,” Lauren Baxley said. “Because we have done almost all the remodeling work on our building ourselves, the skills I learned there have been well used. It makes me proud to look around our building knowing we physically built this.”

WCU and Jackson County will forever be connected by alumni who chose to be Made in NC. 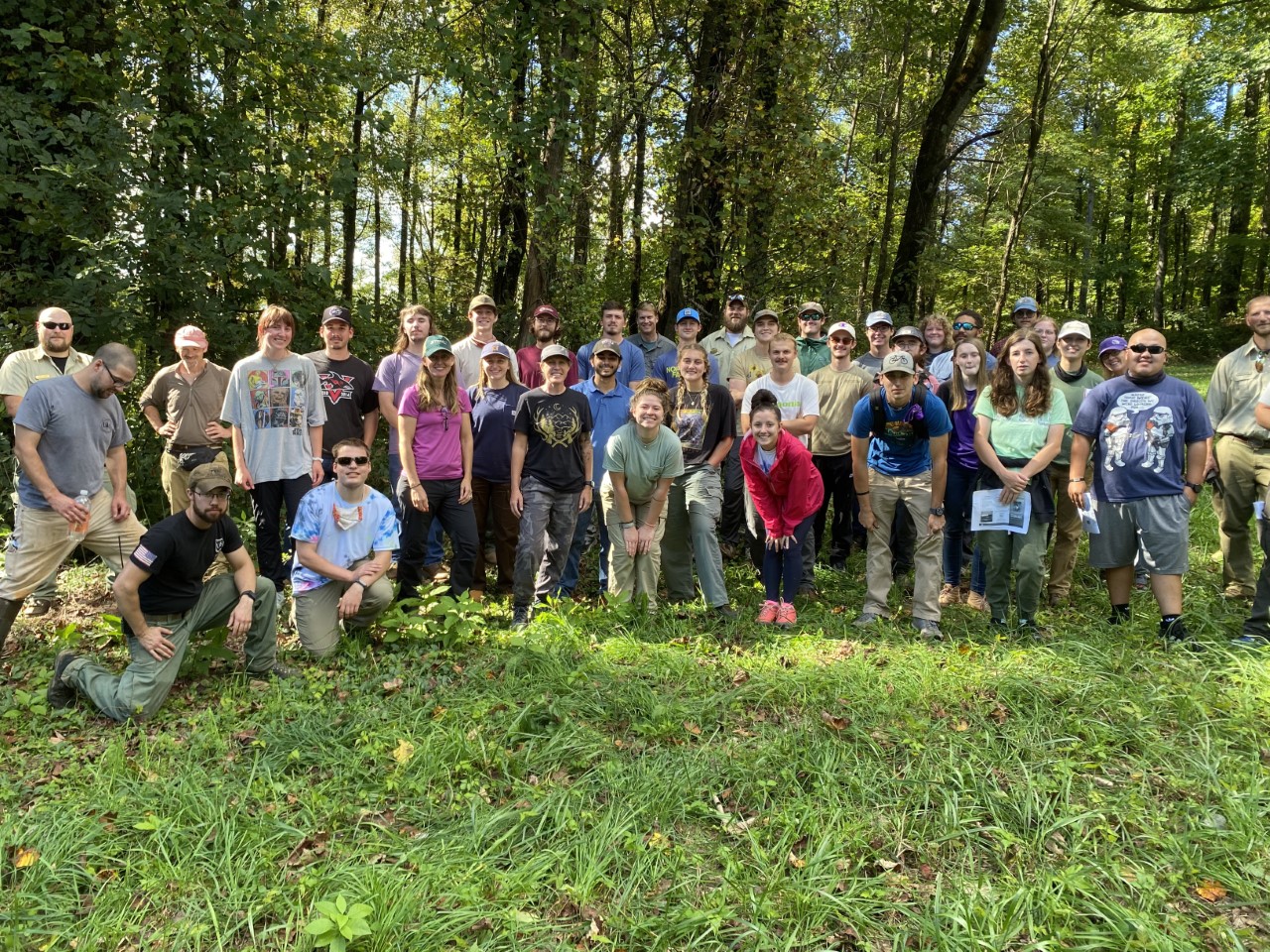