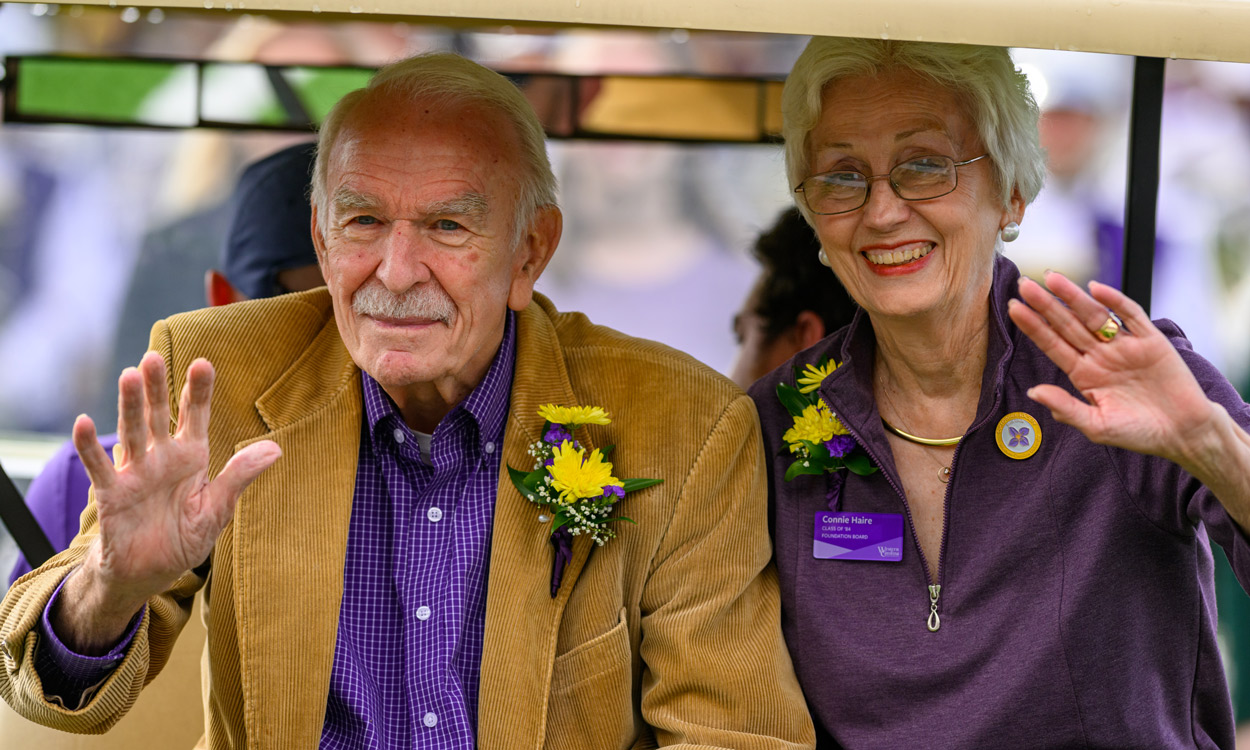 Phil and Connie Haire wave to the crowd during halftime of WCU's Homecoming football game.

She’s “just a girl who can’t say no.” He’s just a guy whose love for theater once led to a supporting role in a Western Carolina University production of the beloved Broadway musical that spawned that classic song lyric.

She’s Connie Haire, a career educator whose inability to decline numerous requests over the years has led her to serve on various volunteer boards – often as chair. He’s former N.C. Rep. Phil Haire, who was part of the original brain-trust behind the university’s Health and Human Sciences Building and the North Carolina Center for the Advancement of Teaching.

Together, the husband-and-wife dynamic duo have racked up the public service equivalent of frequent-flyer miles through their support of the Western North Carolina region and to the westernmost institution of the University of North Carolina System, which is based in their home county of Jackson.

In recognition of the Haires’ contributions to WCU and to the mountain region it was founded to serve, the university has bestowed upon them its Distinguished Service Award, making them one of just a handful of couples ever to receive the honor. The award was officially presented Saturday, Nov. 5, as part of WCU’s Homecoming 2022 activities, by Chancellor Kelli R. Brown, who called the Haires “a dynamic duo, well-known to many in our community.”

“Phil and Connie have dedicated their lives to public service – individually and as husband-and-wife,” Brown said. “Thank you, Phil and Connie, for all that you’ve done not only for the university, but for our surrounding region as well. You are an inspiration to so many of us on the power of what the impact of service can mean to a community and a region.” 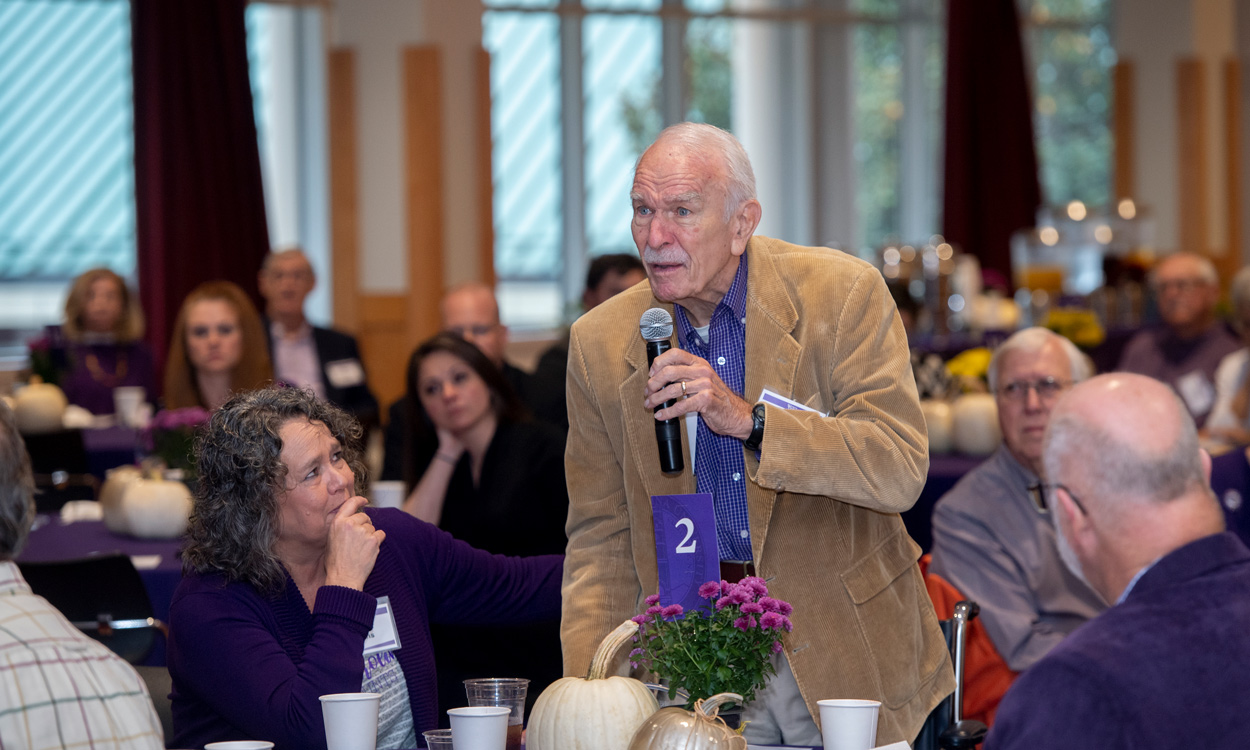 Phil Haire addresses the audience at the Chancellor's Brunch and Alumni Award Ceremony at WCU's Homecoming on Saturday, Nov. 1.

His family moved from the mountains of West Virginia to the mountains of Western North Carolina and the town of West Jefferson, following through on the desire to keep the Haire brothers out of the coal mines. Phil Haire enrolled at the University of North Carolina-Chapel Hill, earning his bachelor’s degree in history in 1958 and his law degree in 1961 before joining the U.S. Air Force.

Upon leaving the Air Force and its Judge Advocate General’s Corps, he began practicing law in Waynesville, moving to Jackson County in 1969 to help form the law firm of Holt, Haire and Bridgers. He served as Sylva’s town attorney for more than 27 years.

He was among the attorneys on the Watergate Committee, more formally known as the Select Committee on Presidential Campaign Activities, in 1973 and 1974. He has served as vice chair of the N.C. Bar Association Board of Governors, chair of the Senior Lawyers Division and chair of the N.C. State Bar District.

In Sylva, he quickly became enamored with the university a few miles down N.C. Highway 107 and its intercollegiate athletics program, joining forces with a handful of like-minded individuals to launch the Catamount Club and serving as its president from 1970 until 1972

“I was not a Western graduate, but I was aware of the university and I really got interested in it. I just loved the campus and the smallness of it, with the old football field behind the library and playing basketball in Reid Gym. It was just a great experience,” he said as part of the Catamount Club’s 50th anniversary celebration.

Phil Haire’s service in the arena of higher education began when he was appointed to the UNC Board of Governors in 1981, serving for 12 years before joining the WCU Board of Trustees in 1993. He continued advocating for higher education issues as a member of the N.C. House of Representatives from 1999 until 2013, representing the WNC counties of Haywood, Jackson, Macon and Swain that comprise District 119.

As a member of the UNC board, he was part of the planning committee for the North Carolina Center for the Advancement of Teaching, created in 1985 to provide professional development opportunities for educators at a main campus in Cullowhee and a second campus in Ocracoke.

As a legislator, he was a staunch supporter for the state appropriation leading to the $46 million Health and Human Science Building, which opened in the fall of 2012. The building, the first on WCU’s West Campus, brought together under one roof university programs in nursing, physical therapy, communication sciences and disorders, social work, athletic training, emergency medical care, environmental health, nutrition and dietetics, and recreational therapy.

“I was in a good place politically to exercise some influence. Western was growing and the population was aging, and our region needed better access to health care. We didn’t really have that much up here in Western North Carolina, so anything we could do to get improvements in health care in this area, that was an important issue for me,” he said.

“We didn’t have a whole lot at that time up here in the mountains, so I just really felt very strongly about improving the quality of education and increasing access to it for the students,” he said. “We were just setting it up so that when the time was right, the university would really kick off. And it did. Now we have students from all over who want to come to study here in the mountains.”

In addition to education and health care, he also focused on tourism, agriculture, the environment and steep slope issues while in the N.C. House. “Western North Carolina is just home to me,” he said. “When I was in the General Assembly, I was representing the people of Western North Carolina. I was an advocate for the issues the people of the mountains had in mind and the interests of the local people.” 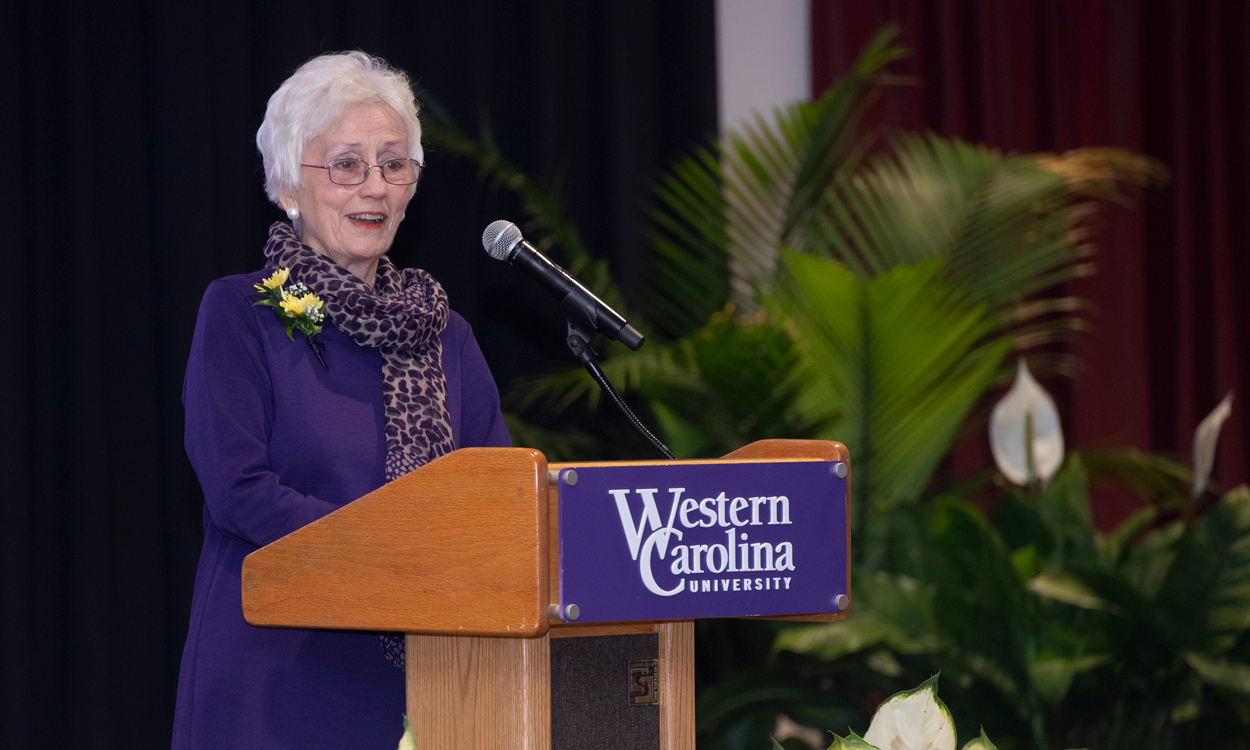 Connie Haire speaks as she accepts WCU's Distinguished Service Award, presented to her and husband Phil as part of Homecoming 2022.

Spouse Connie Haire received her bachelor’s degree from Erskine College in 1965 and her master’s degree in education from WCU in 1984 before earning her doctorate in adult education from N.C. State University in 1997.

After working for several years as a public school teacher, she joined Southwestern Community College as director of resource development in 1986, continuing in that capacity until becoming dean of institutional development in 1997. She also served as vice president for student and institutional development before taking her final position as vice president of SCC’s Macon campus. She was executive director of the SCC Foundation for the entirety of her career at the college.

While unable to say “no” to those frequent requests to join a board, she admits to thinking about it when asked to join Angel Medical Center’s board. “I don’t know a whole lot about what’s going on the medical field,” she said. “But then I thought, ‘Well, I am a good board member.’ You make a commitment to serve, then you serve. You do your board work, you do your committee work, you go to meetings and you do what you committed to do.”

She traces her dedication to board service to a long-ago conversation while attending a local meeting of the board of the North Carolina Rural Center. “Liston Ramsey (then North Carolina speaker of the house) said, ‘People in the mountains want to serve on boards, but if they don’t go to meetings, well, what good are they?’” she said.

“Part of it for me is a commitment to Western North Carolina and to WCU, helping the region and the university grow,” she said, to which Phil Haire added, “We both take that commitment very seriously.”

“I’ve always felt that it’s incumbent on those of us who can to do as much as we can for our communities, be it in Sylva, in the county or the larger region. I have always had this sense of giving back to the community in whatever ways I can,” Connie Haire said.

And the Haires have given more than just their time and their talent. In addition to starting a scholarship fund at SCC, donating the property that houses the Awake Children’s Advocacy Center for abused children in Jackson County and being active in fundraising efforts for First United Methodist Church in Sylva, they have made more than $250,000 in contributions and pledges to WCU over the years.

“We’re probably the best audience members you’ve ever met,” Connie Haire said. “I tell people I can’t sing. My mother tried to teach me piano and they tried to teach me clarinet in junior high band. Phil attempted banjo at one time. We both enjoy music, but neither of us have any particular talent in that area.”

A former member of the board of directors for Haywood Arts Regional Theater in Waynesville, Phil Haire has had some experience on stage with HART, Sylva’s Kudzu Players and at WCU. In perhaps an example of typecasting, the played the judge in a production of “To Kill a Mockingbird,” and he was part of the cast of “Oklahoma!” at WCU in 2006.

Which brings us back to that girl who can’t say no. In addition to her personal commitment to serve, she attributes her lengthy list of volunteer activities to the people behind those many boards, commissions and agencies.

“I am able to serve on as many boards as I do because of the staff. The organizations behind those boards have amazing people, and Western is no exception,” Connie Haire said, adding she is honored to serve on the WCU Foundation Board of Directors. “The people at Western have a commitment to the fact that it’s a regional university. It’s not the flagship. It’s here to serve this region of the state. That’s something to which Phil and I will both always say ‘yes.’” 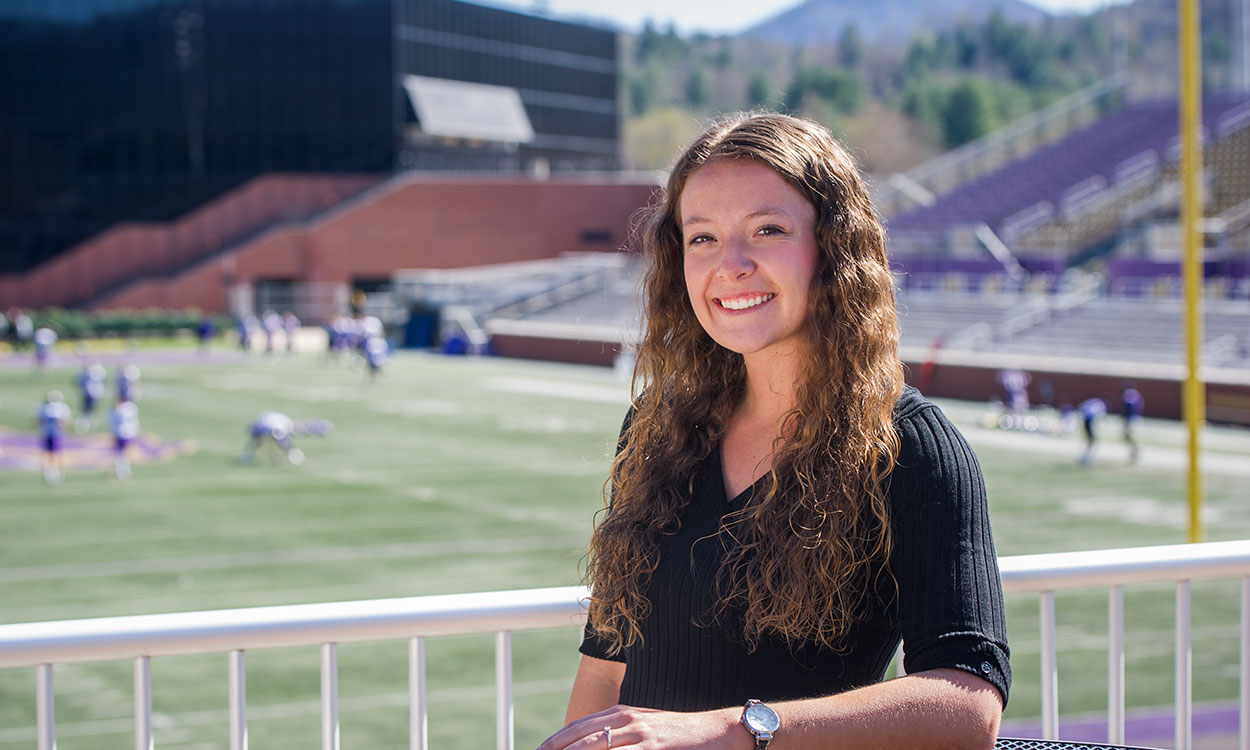