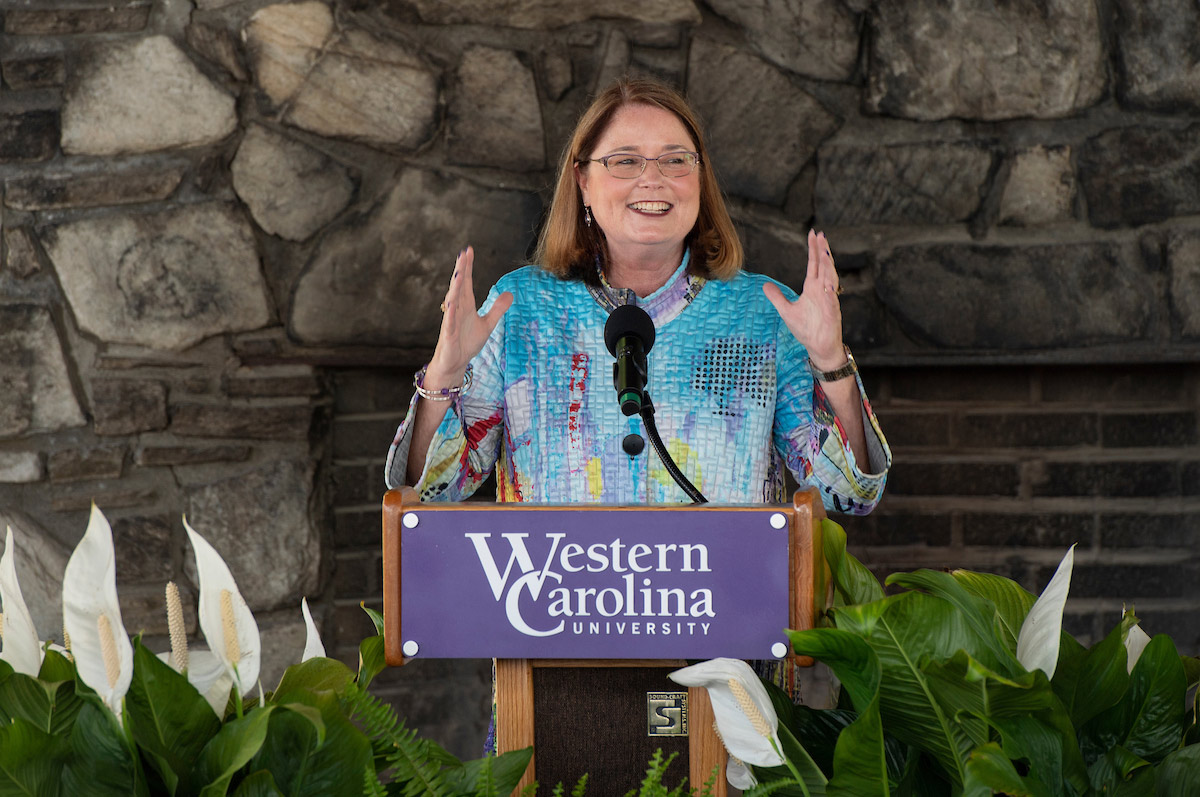 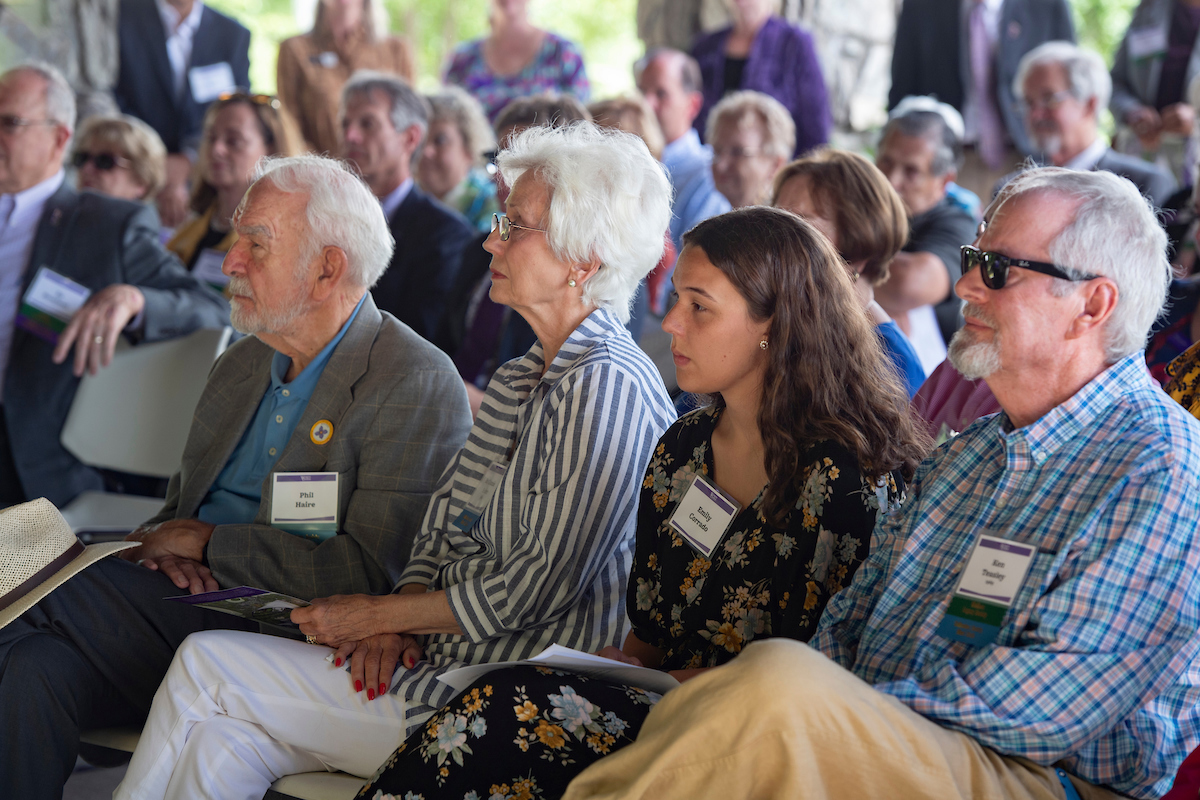 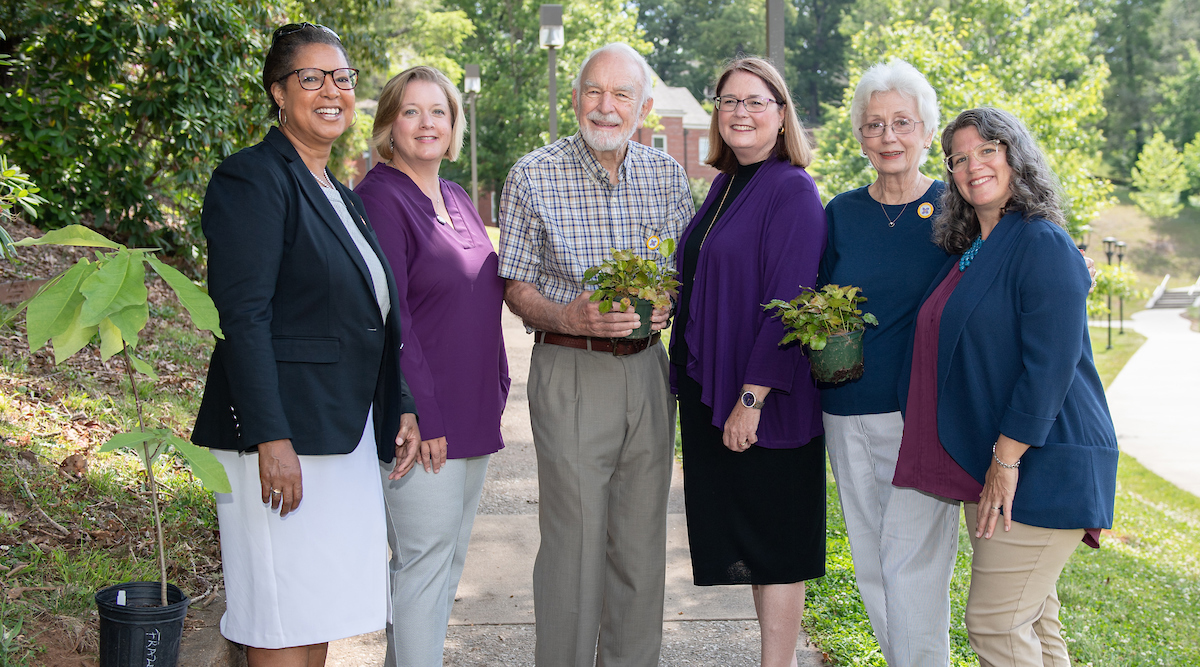 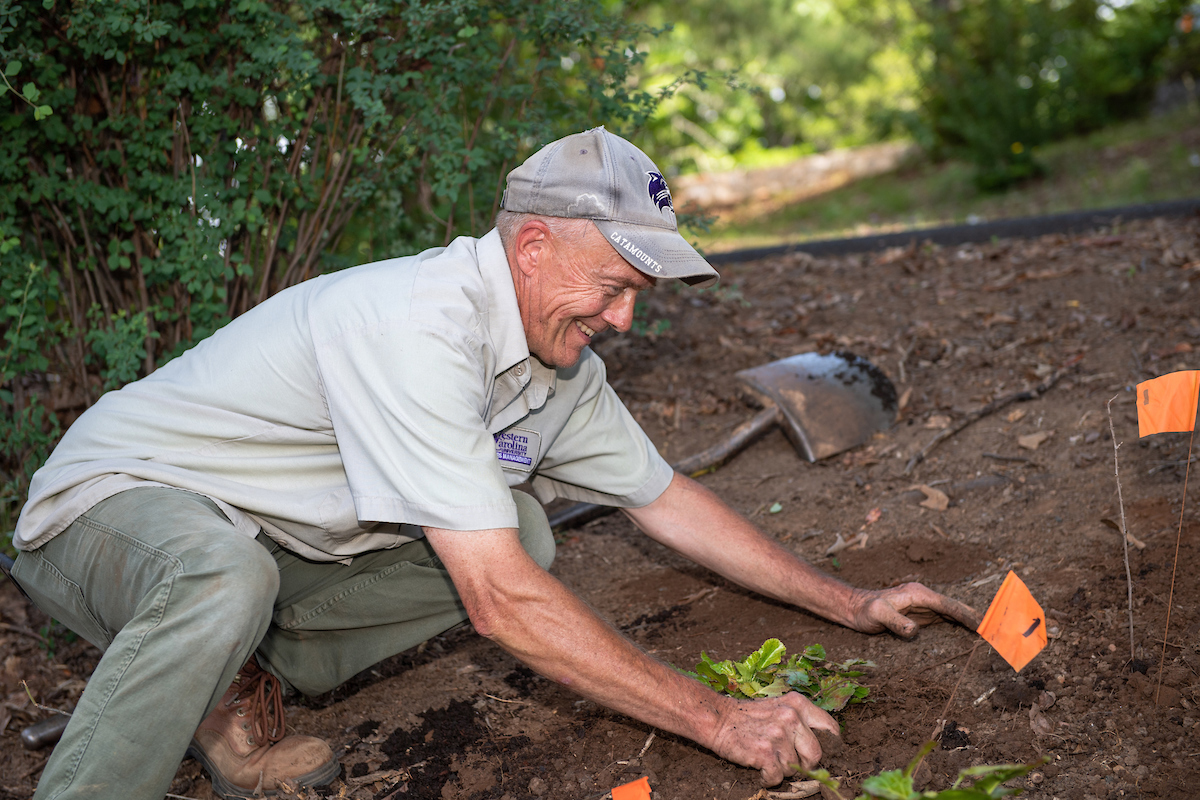 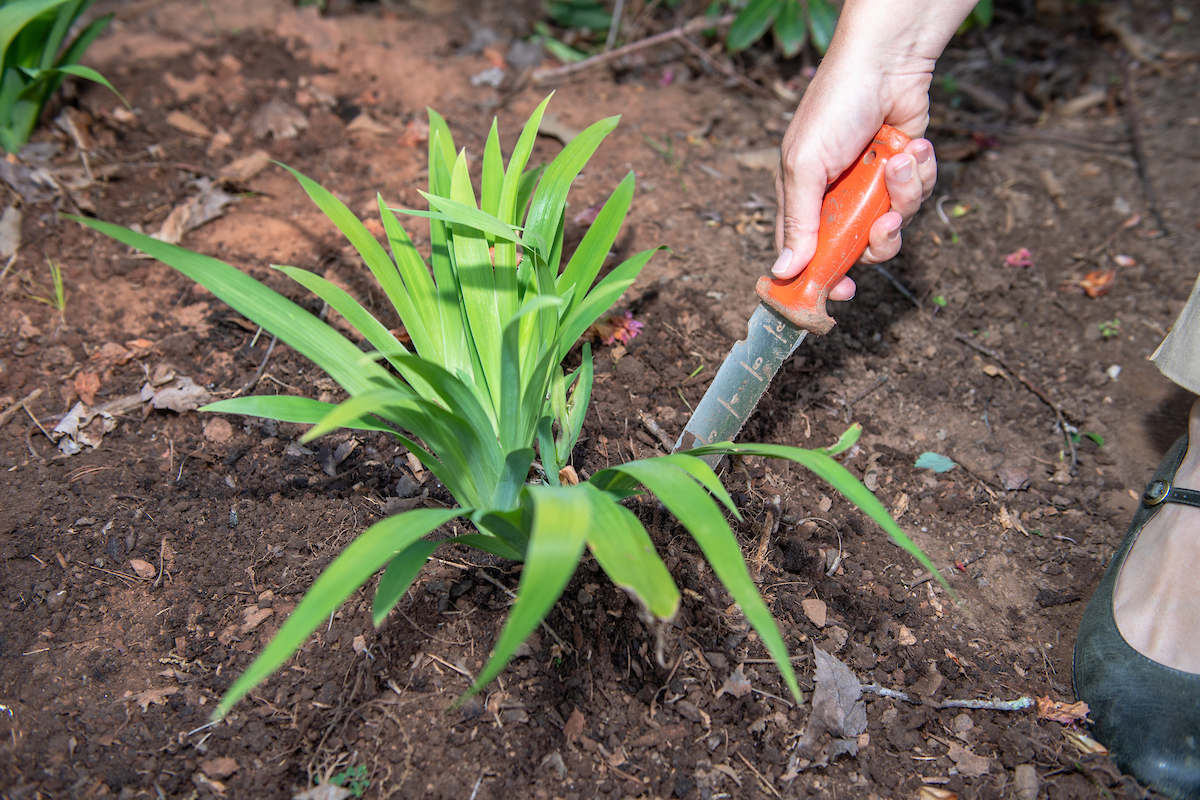 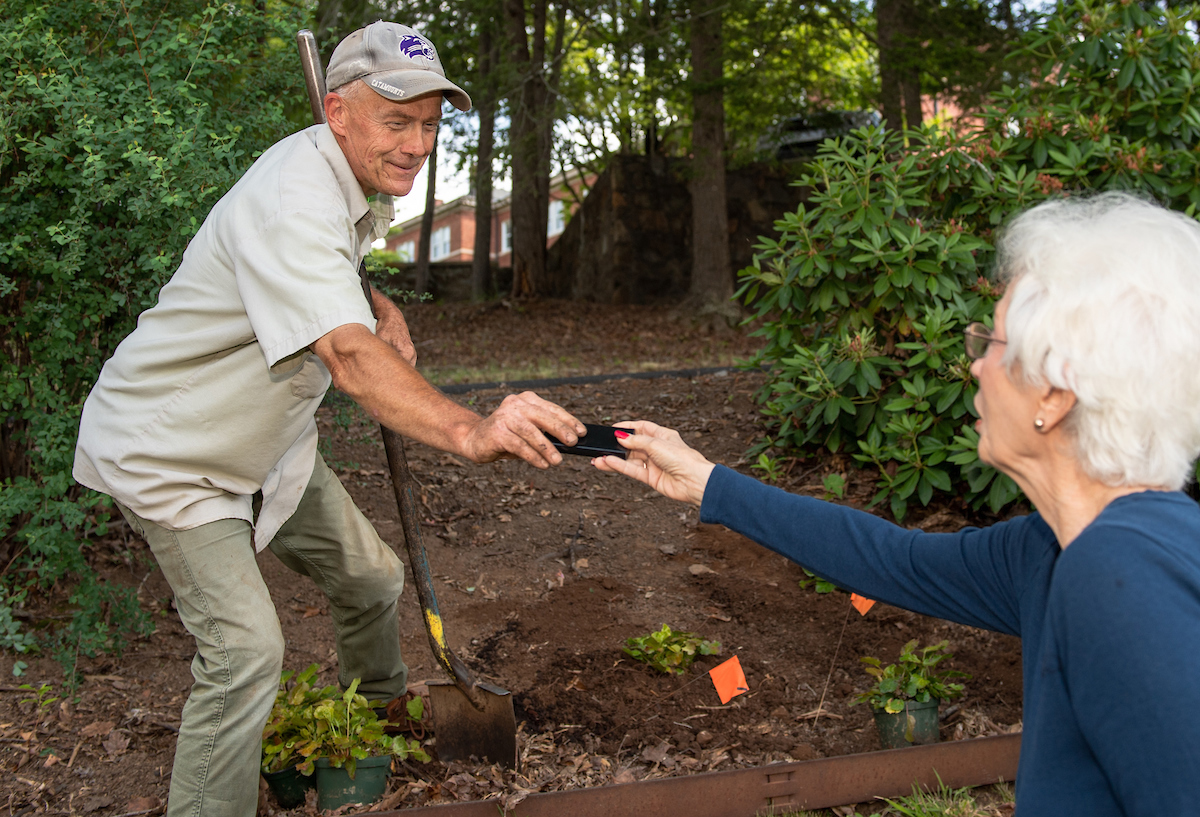 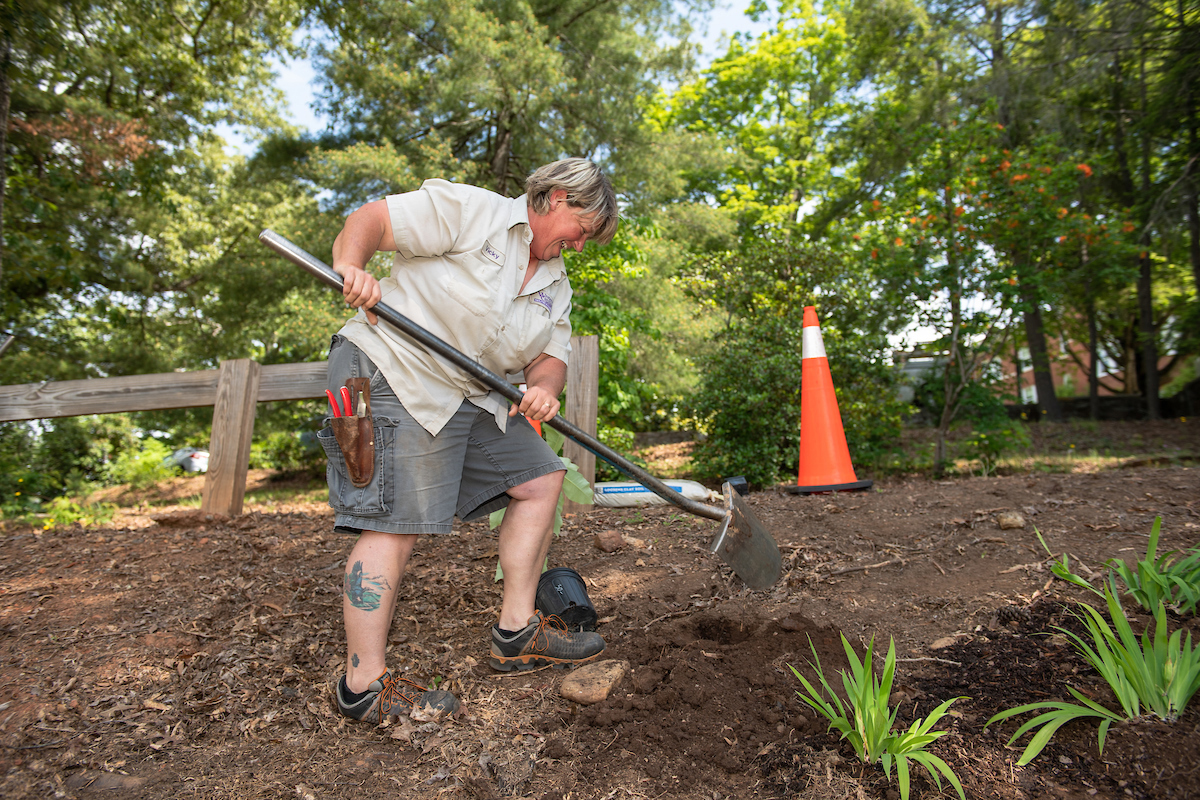 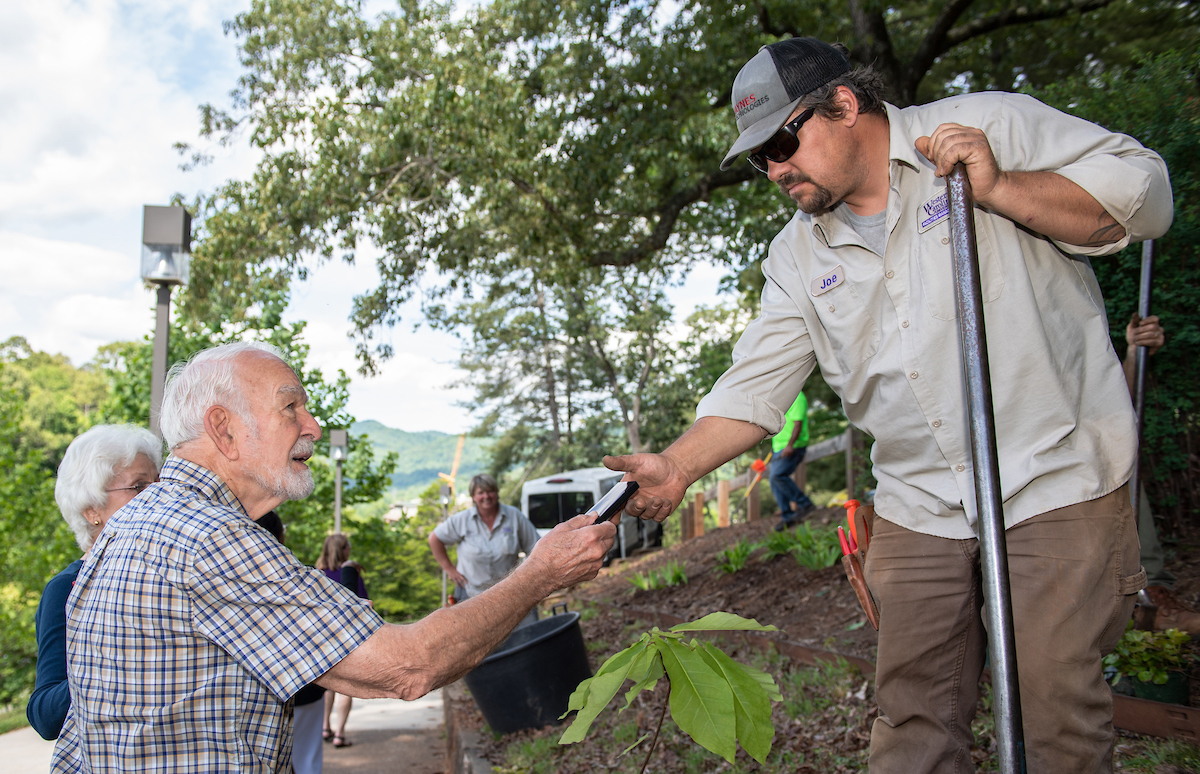 Nestled in the hillside between Bird Building Lane and the back of Brown Hall are five newly planted species of native flora, chosen specifically to mark the beginning of an annual tradition to honor new and current members of two Western Carolina University giving societies.

On Friday, June 4, the Division of Advancement and the WCU Foundation celebrated those commemorative additions to the university’s landscape by hosting the inaugural Planting Day at the WCU picnic shelter to thank members of the Madison Legacy Society and the Cullowhee Society for their dedicated contributions to WCU and to introduce the native flora that were planted in their honor. Currently, the Madison Legacy Society has 134 members, and the Cullowhee Society has 209 members.

“I want to let you know that this group assembled here today, and all of our Madison and Cullowhee members, represents 245 donors, who have given 13,920 gifts, totaling $82,779,157.48. Isn’t that amazing?” said Bryant Kinney, a member of the Board of Trustees and its recent chair. “Last year, more than 5,000 students submitted scholarship applications.  From those 5,000, more than 1,300 students received assistance from donor-supported scholarships.”

The societies represent the genuine spirit of philanthropy at WCU and support the heart of its campus – the students, said Jamie Raynor, interim vice chancellor for Advancement. “The Madison Legacy Society, which recognizes planned gifts, is built on a foundation of devotion and legacy. The Cullowhee Society, which recognizes cumulative giving of $100,000 or more, is built on a foundation of generosity and loyalty.”

Chancellor Kelli R. Brown thanked the donors for their generosity and commitment to students, alumni, parents, faculty, staff and friends. “Welcoming you here to honor you and to celebrate the symbolism of tending to the native plants of our region is just the beginning of our gratitude,” she said. “Every gift helps ensure that we can continue to offer our students the best educational experience and prepare them for success after graduation.”

Retired WCU history professor John Bell, a member of the Bluet Circle, one of four giving levels within the Cullowhee Society, said he established the John and Dorothy Bell Scholarship and the Dorothy P. Bell Fine and Performing Arts Scholarship, named for his late wife, to help students. “I have been helped along the way through the years with scholarships and other support, and so I like to do it for students coming in,” he said.

Susie Ray, a retired faculty member, and wife of the late Bob Ray, a WCU alumnus and former Catamount basketball player and coach, said she became a member of the Cullowhee Society’s Bluet Circle after she established a scholarship in her husband’s name and later helped support renovation of the men’s and women’s locker rooms. Her husband attended WCU on a basketball scholarship, she said.

“In 2006, I gave him a basketball scholarship for his birthday, and so it’s been going ever since to the point it’s fully funded,” she said. “I think he appreciated it more than anything, except maybe getting into the WCU Hall of Fame. He was a player as well as a coach under (former basketball coach and interim athletic director) Jim Gudger, who’s the legendary guy around here. It really is to honor him, that I got involved with this.”

Rebecca Schlosser, a 1973 alumna, and member of the Board of Trustees, and her husband, Michael, also established a scholarship in honor of a loved one, the David Schlosser Scholarship. The Schlossers are members of both the Madison and Cullowhee societies.

“I’ve always given through the years, but in 2011 we lost our only biological son and it meant so much to establish a scholarship in his name where we could see other students pursue their academic dreams,” she said. “I was able to see my first scholarship recipient walk across the stage and get her degree, and when she did, she hugged me and said, ‘We did it, we did it.’ I can’t tell you the warmth in my heart it gives me to help someone who has a need to pursue their academic dreams and get a degree.”

Emily Corrado, a rising senior in the School of Nursing, is a recipient of the Chancellor’s Madison Scholarship, which she said made all the difference in whether she could attend college. “Without donors or scholarships or anything, I wouldn’t have been able to realize that nursing was my passion. I wouldn’t have been able to make a 4.0 GPA, especially coming from such a background where that’s not expected, where I am the second to youngest in my family of six, but I am the first to get a college degree.”

“Without donors or scholarships or anything, I wouldn’t have been able to realize that nursing was my passion… I am the second to youngest in my family of six, but I am the first to get a college degree.”

Beth Lofquist, first vice chair of the Foundation Board of directors, and a member of the Madison Legacy Society, talked about the symbolism behind the plants, which, she said, “will continue to grow and enhance our campus, just as your gifts continue to grow and sustain our student body.” The same species will be planted each year across campus to honor new and current members of Madison and Cullowhee societies.

The inaugural Planting Day plants are:

Also, each member will receive a specially designed pin that corresponds to the plant of their society membership. Jodi John Pippin, director of donor relations, did the initial drawings and designed the concept, which she then passed on to a vendor to transform into pins. She credited Raynor and Ben Pendry, executive director of advancement services, with contributing to the process.

“The inspiration was to put a small token of the shape of each native plant’s bloom onto a metal pin, representing the culmination of each donor’s generosity,” Pippin said.  “Each native plant holds beauty and value that is relevant to each society and giving level.  We didn’t just create traditional giving societies, we went outside of the box, and dovetailed donor appreciation with an appreciation for our region’s native plants, instilling something meaningful for the donor and for our region.” 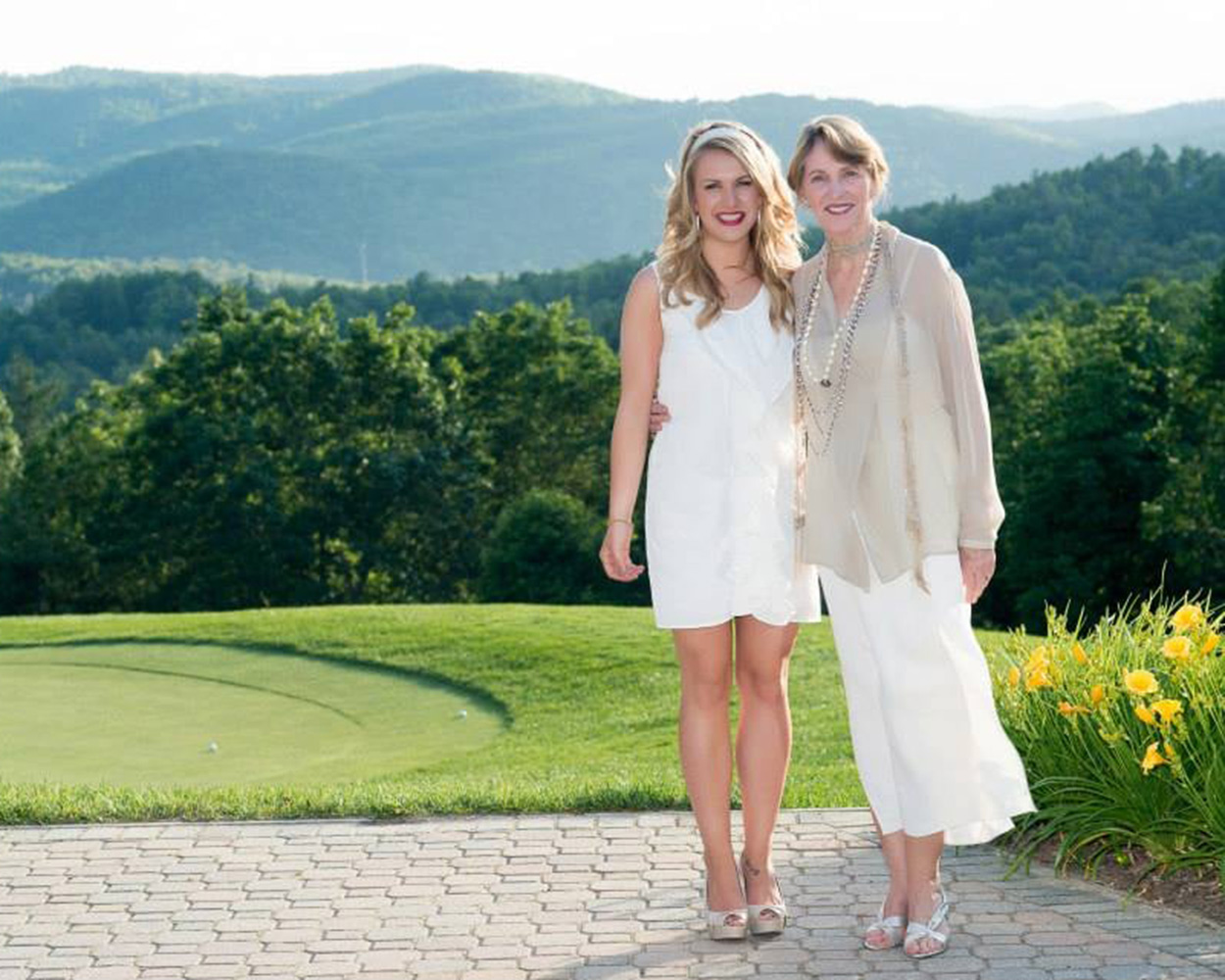 A lasting legacy of love 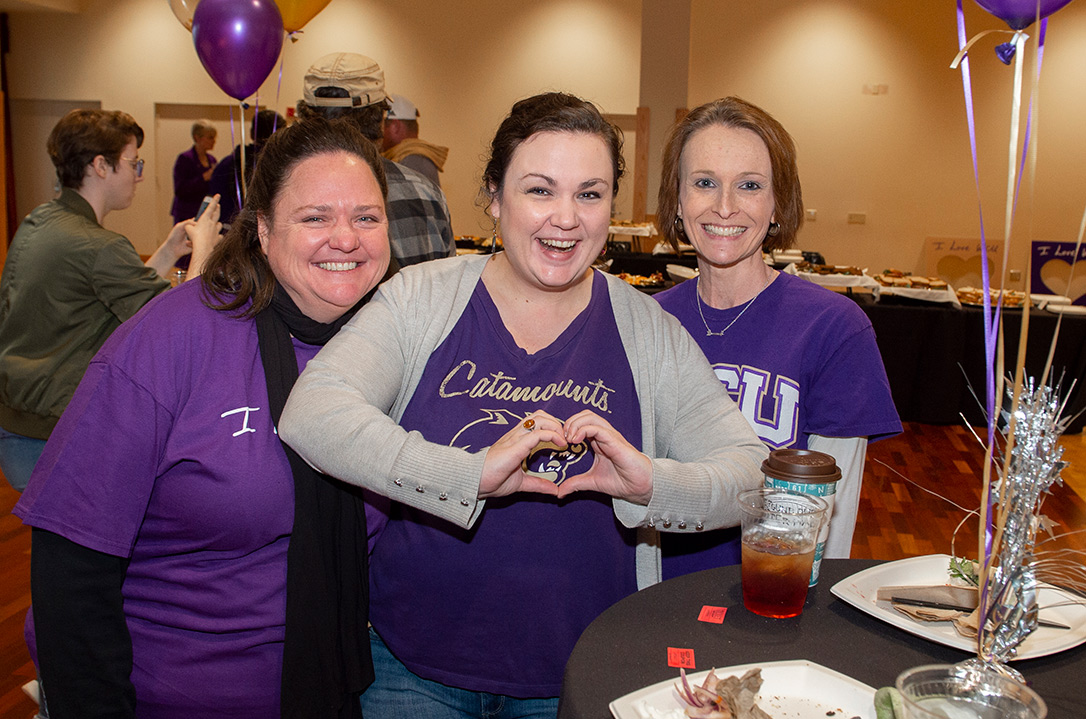