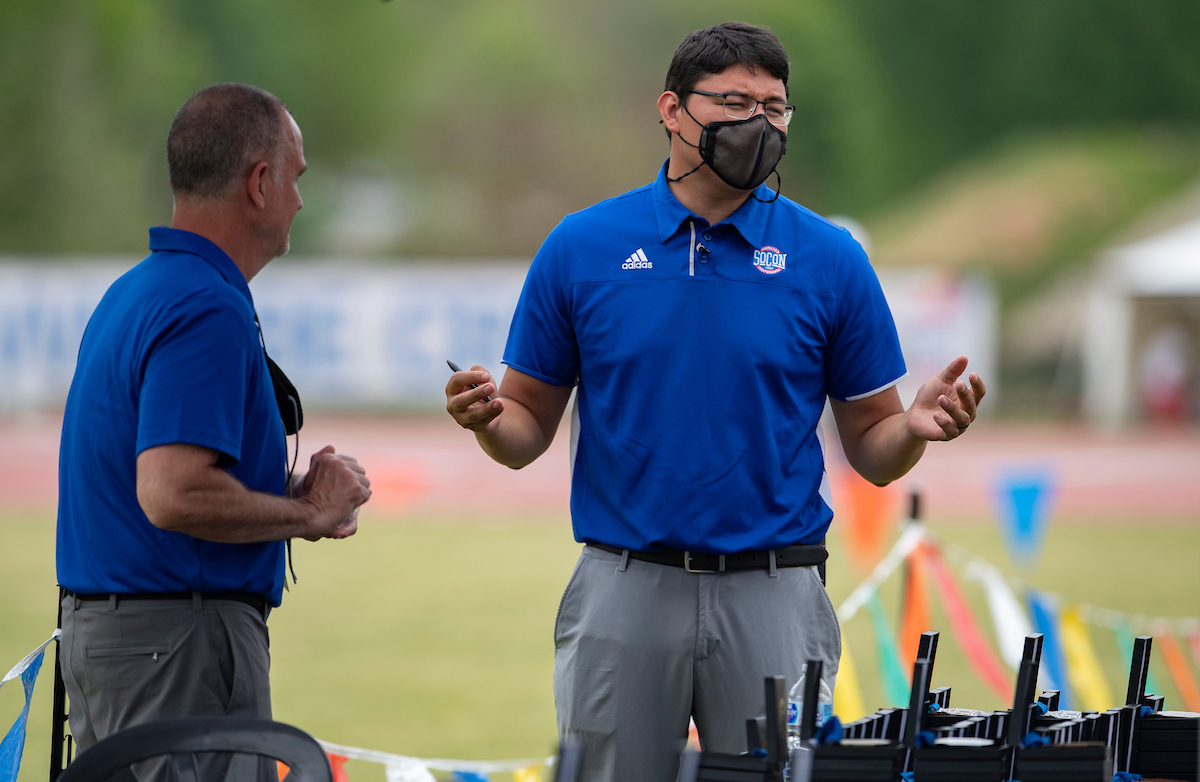 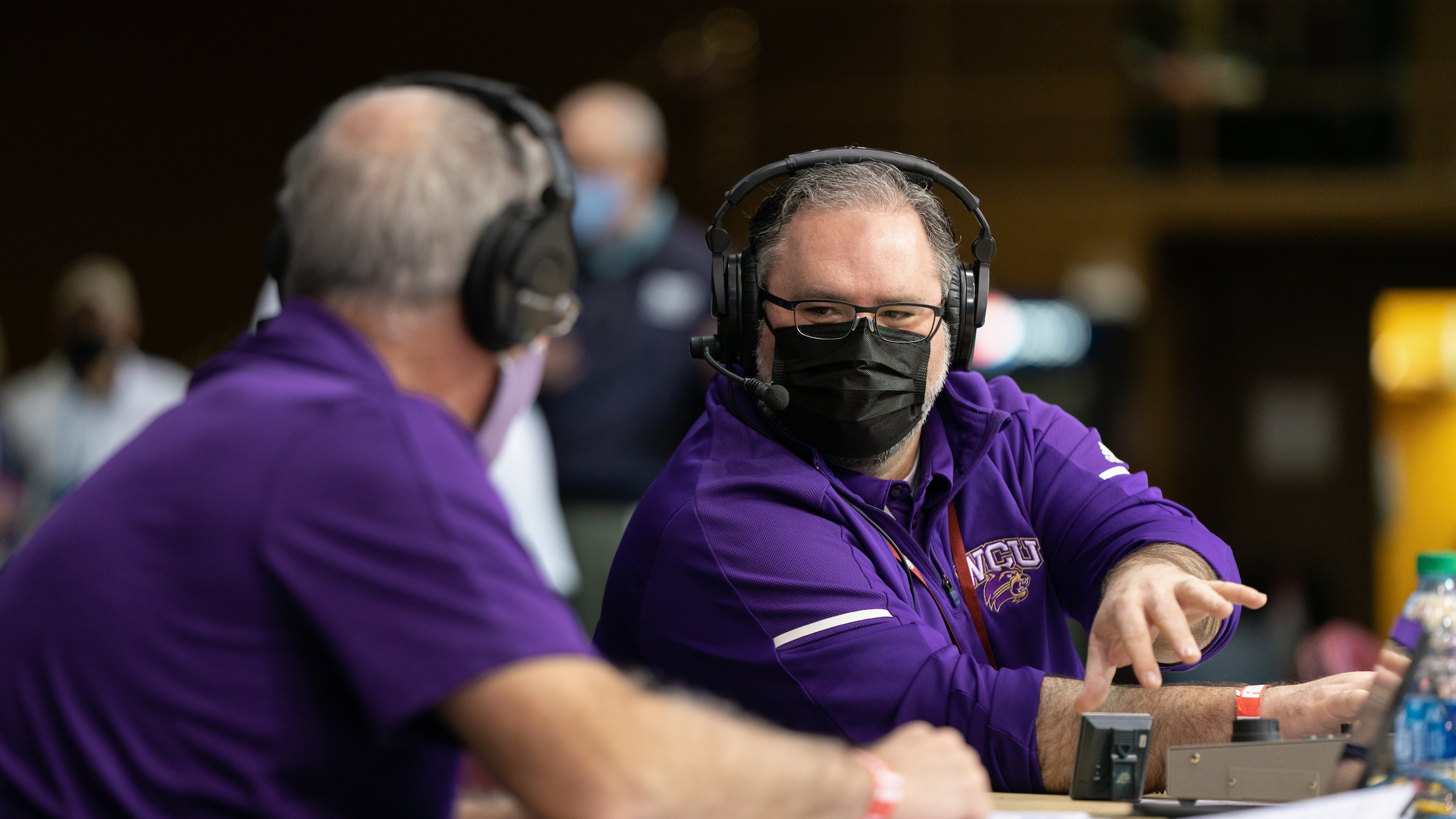 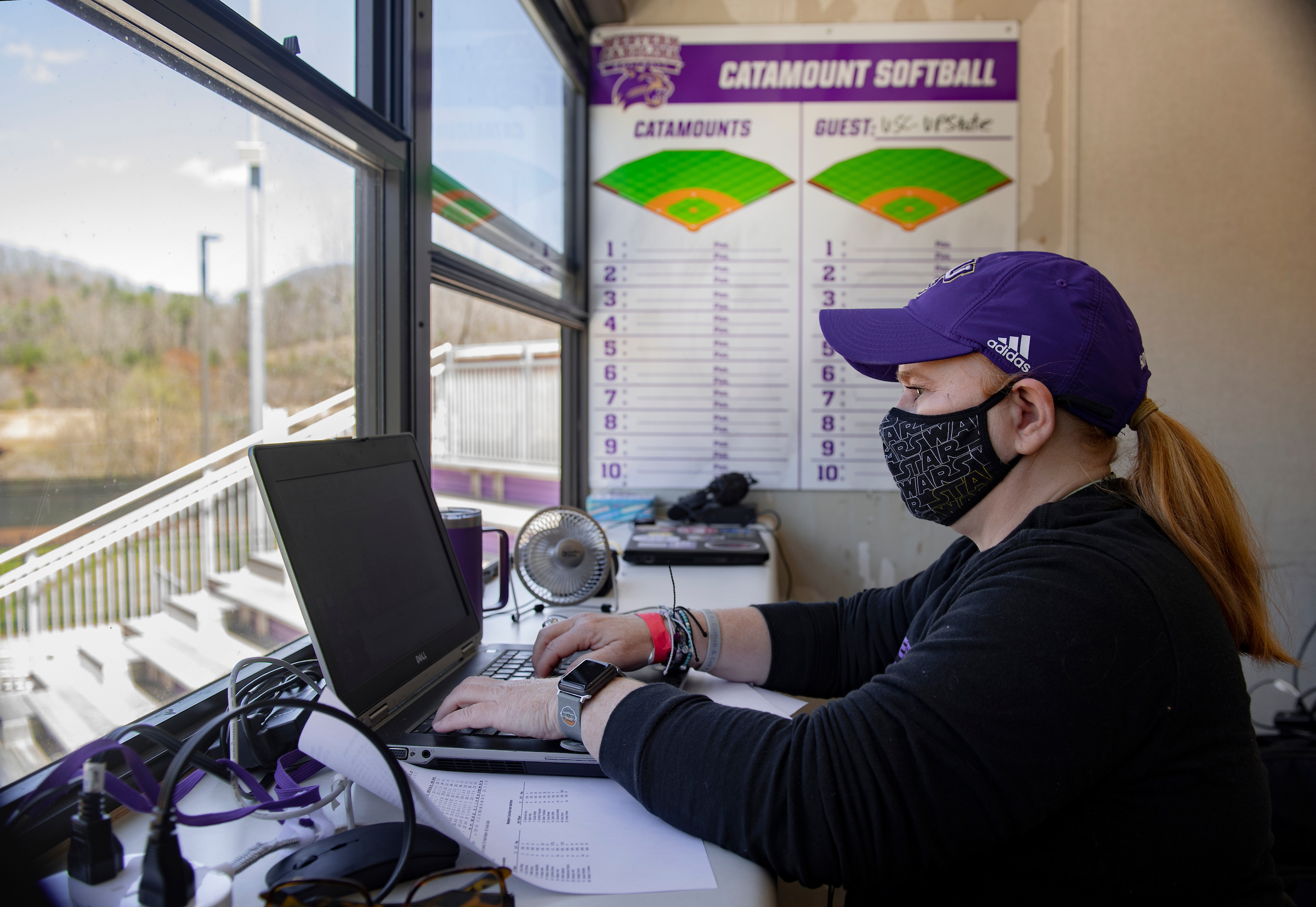 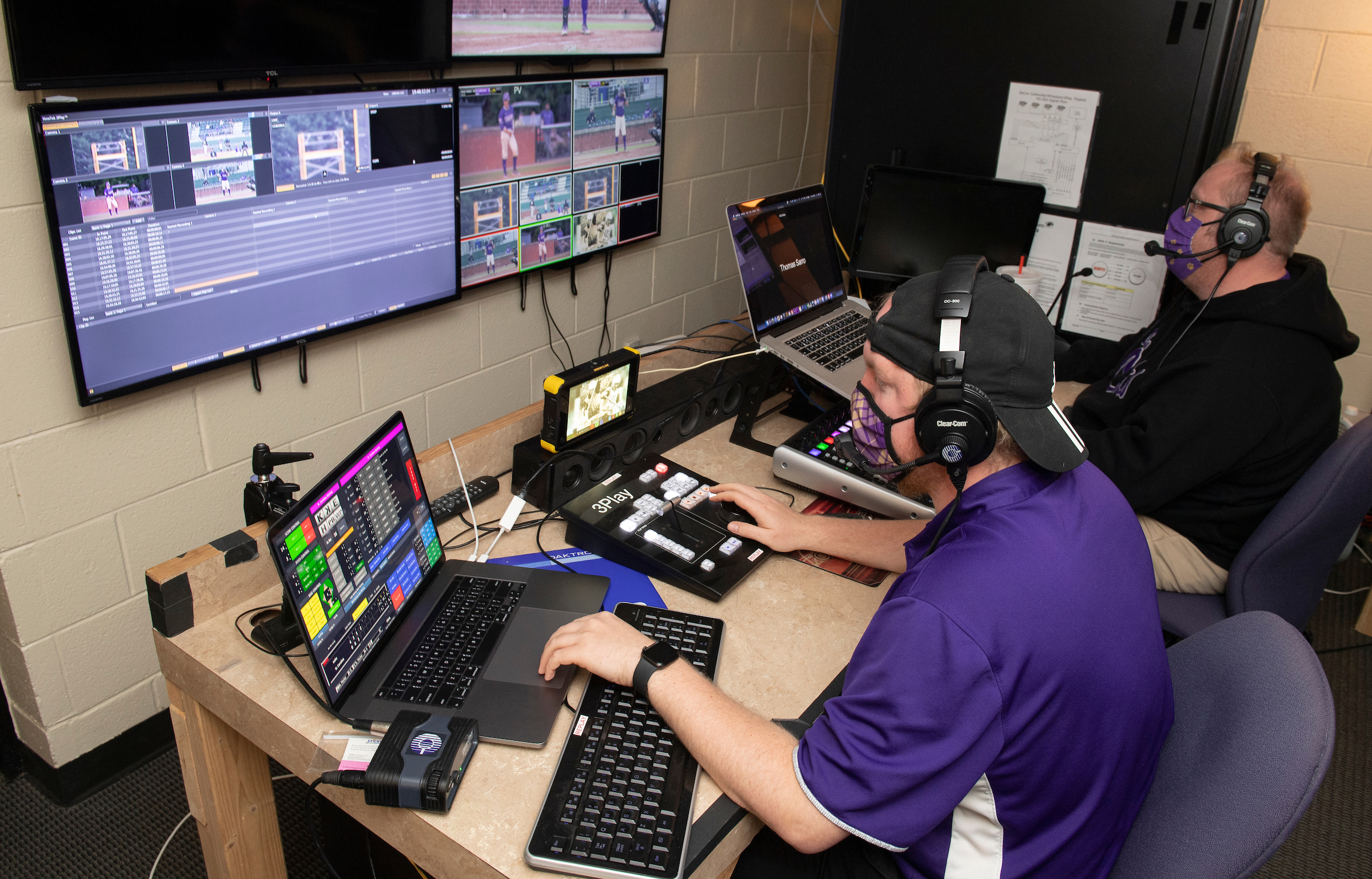 A lot went into every athletic team playing in the spring

The men’s and women’s basketball teams found themselves having to make room in Ramsey Regional Activity Center for a full slate of volleyball games. Normally in the fall, their seasons would barely overlap. Women’s soccer was also thrown into the mix.

Last spring, every WCU athletic team participated in their sport due to COVID-19, pushing back the original start dates of fall sports. Pulling that off logistically is one thing under normal circumstances. But try doing it during a pandemic, and abiding by the rules of the Centers for Disease Control and Prevention, the North Carolina Department of Health and Human Services, the Jackson County Department of Public Health, WCU’s Catamounts Care, the NCAA and the Southern Conference.

That’s the dilemma WCU’s athletic staff was faced with to start the 2021 calendar year.

“The team really stepped up,” said Alex Gary, director of athletics.  “It was hectic, to say the least. The task was more intimidating at first, but it went by so quickly because we were always doing something and then moving to the next thing.”

A lot happened behind the scenes that allowed the sports to take place, seemingly without a hitch. The Ramsey Center proved to be one of the biggest challenges. Not only is it home to men’s and women’s basketball, but also volleyball and football. Finding space for all four teams during the same season, while also adhering to occupancy and social distancing rules proved to be challenging, Rory Jimerson MS ’19 said.

Depending on the size of the room, it could hold anywhere from 10 to 25 people. The football team alone has nearly 100 student-athletes, plus coaches. To stay compliant, the department relied heavily upon the university’s Office of University Counsel, in particular T.J. Eaves ’12, who kept them abreast of the ever-changing guidelines.

“If men’s basketball was having a game, we had to create a bubble of this is only men’s basketball space,” said Jimerson, director of athletic facilities. “The other sports had to operate around the building to avoid crossing over them, so if we had to contact trace, we didn’t have different teams running into each other.”

In football, each position held individual team meetings, so they often found themselves setting up projectors in storage rooms, or showing film on the Ramsey Center concourse against the walls. There were times when larger team meetings were held in the John W. Bardo Fine and Performing Arts Center, but even then, the performance hall could only hold about 75 people.

Jimerson said guidelines were established for each sport, such as where teams would enter, how they would be screened, who needed to get tested, how many fans would be allowed in the stadium, where does signage need to be placed to remind people to wear their mask and social distance, and where to place hand sanitizer.

“The first game for every sport was very stressful because you were like, ‘What is it actually going to be like?’’’ Jimerson said. “Once we got the first game out of the way for every sport, we realized this is our setup and this is how we’re going to do it. We had to make some changes along the way to make things a little bit better, adding more signage, making people come in a different way, making sure they knew exactly what was expected of them when they got here.”

Jimerson said North Carolina rules required WCU to provide each fan with a complimentary ticket. In the past, sports like softball, soccer and volleyball weren’t ticketed. It was general admission, first-come, first-served. “That takes more people and more time,” Jimerson said. “When you have multiple events going on at the same time, you can’t have one ticketing director be in multiple locations at once. So, you’re counting on other staff and students.”

Daniel Hooker ’01, assistant athletic director for media relations, made the decision early on that with the exception of football, he and his staff would not travel with their assigned teams as a means of mitigating some of the COVID-19 risk, as well as limiting costs. However, it did prevent his staff from participating in and covering the team interactions that came from being on the road together.

But that didn’t reduce the amount of work that needed to be done. For Hooker, who also doubles as a sportscaster, he found himself doing four to six games per week, as opposed to one or two in a normal semester. In February and March, there were only a couple of days that had no events, he said.

“Busy has definitely been the word, but it’s been fun,” Hooker said. “For us, the games are what’s fun.”

As a sportscaster, one of the hardest things for Hooker was keeping up with what sport he was doing. “There were plenty of times you were going into a break and you’re sitting there thinking, ‘You’re listening to Catamount … basketball.’ It was interesting.”

For Denise Gideon, director of media relations and social media director, she recalls one 10-day stretch being particularly rough. Baseball, softball and soccer were starting and basketball was winding down. With the demands piling up, Gideon said it took a toll on her health.

“I had a five-day span where I just had a headache for all five days,” she said. “I was sore in my shoulders. I went to see a lady who is a masseuse, Carole Lilly, and she said, ‘You’re like a rock.’ That’s when I figured out that this is a crazy season and you’ve got to go full steam ahead, but there’s a point where you also have to step back and take care of yourself. After that horrid 10 days, I started saying, ‘I’ve got to take care of myself,’ making sure I was drinking enough water, and going to get a 30-minute chair massage.”

Faculty and staff from across campus chipped in, like Greg McLamb, an education adviser, who normally assisted on the sidelines during football games, but found himself operating a video camera. People within the athletics department found themselves doing jobs they had never done before, like Dan Gibson, a compliance director, and several members of the Catamount Club, all of whom were behind cameras. They also enlisted the help of the video team from University Communications and Marketing.

“Whenever you’re going through something like this, you really have to lean on each other,” Gary said. “The folks across the campus have been extremely helpful, too. I learned that (our staff) really works well together. They communicate extremely well. Everybody asked a lot of questions because everybody wanted to make sure we were doing things the right way at the end of the day.”

One of the reasons the department had to rely on recruiting more camera people is that the Southern Conference struck a new deal with ESPN in December, requiring each school to stream 65 athletic events, up from the previous requirement of 48. But instead of doing that in an entire school year, the bulk of it had to be done during the spring semester.

Fortunately, fiber optics had been recently installed at the facilities housing track and field, softball and soccer. But that also meant they couldn’t afford to have many events canceled or postponed due to weather or COVID-19.

“We did about 75 broadcasts in four months and a week. I look at that as a school record. It’s going to be hard to beat.”

Noah Sautter ’18, the athletic department’s director of video operations, set an ambitious goal of streaming close to 80 events. But after the final two home football games were canceled because of opponents’ concerns due to COVID-19, as well as several more in other sports, that number slowly dwindled.

“Towards the end of the semester, you get to a point where things become stressful,” Sautter said.

Sautter said they averaged streaming an event every day and a half. Very rarely were those events in the same venue back-to-back days, which meant following each event, they had to haul the equipment to the next venue. “It was almost amazing how willing people were to step in and fill that role, regardless of where we put them, or what we asked them to do. They stepped in with an open mind. They came in and did the job to the best of their ability.”

In the end, they streamed 67 athletic events, in addition to the hiring of new football and basketball coaches, and five commencement ceremonies in the Ramsey Center, leaving the team ecstatic over its accomplishment.

“We talk a lot about school records,” Sautter said. “It’s a challenge when you come in as an athlete to break that bar that was set for you by somebody that came before you. We kind of joked that we did about 75 broadcasts in four months and a week, from the first basketball broadcast of the new year to the last commencement broadcast. I look at that as a school record. It’s going to be hard to beat. I can leave here and there’s no plaque, there’s no official recognition, but myself and our team came through and did a record number of events in a short amount of time. I think that’s something special we can look back on, regardless of whether people remember the name.”

With fans back in the stands, and tailgating taking place, the athletic staff rejoices in working in normal conditions and fall sports participating in their appropriate season. But they have fond memories of what they went through in the spring.

“I would say I’ll remember the fact that we were able to have some pretty solid competitive success, even in a very unstable and crazy year,” said Gary, who also had to hire two coaches, negotiate a new apparel deal with Nike, and deal with social justice issues in the last year. “Volleyball had a great year. And softball. Bailey Honeycutt was softball player of the year, the first in the history of our softball program, which began in 2006. Men’s golf came in second in the SoCon Tournament, which is outstanding. Track has continued their competitive success, finishing in the top three.”

“During the COVID lockdown, I think we all took for granted the normal things,” added Hooker. “But at the same time, we gained a new appreciation for things. I grew an appreciation for not having to work 12-hour days, being able to take time off and have weekends back and see how the other half lives for a little bit.”

Is that the sound of the Pride of the Mountains Marching Band playing again? 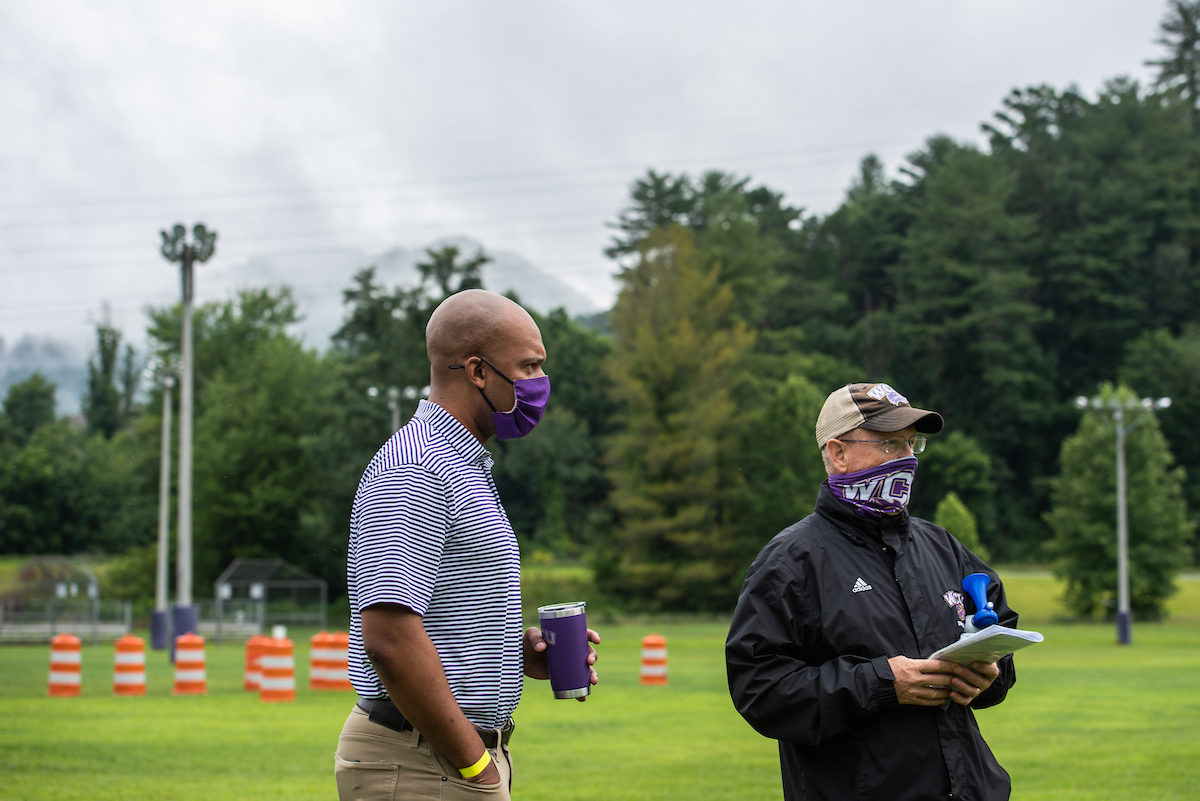 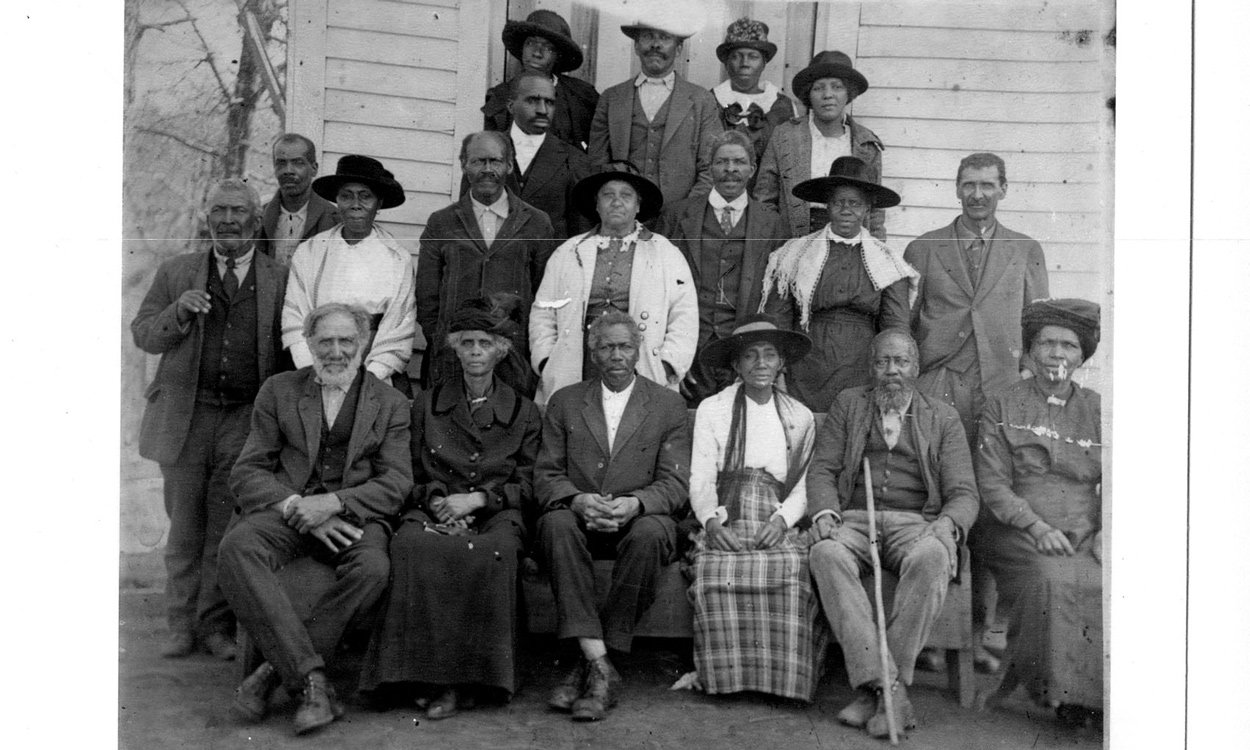