Allen Queen waves to the crowd at halftime of WCU’s Homecoming football game.

As a self-professed underachiever growing up in a Lincoln County mill village in the 1950s and 1960s, lifelong educator Allen Queen was on the verge of giving up on any thoughts of attending college after being rejected by every school to which he had applied.

But then Queen, the youngest child of a large family and the only one to finish high school, received his acceptance letter from Western Carolina University. He has called admission into WCU one of the two greatest gifts of his life. It set him on the path to a career in education and led to that other greatest gift: Only a few weeks into his first semester, he met his future bride, the former Patsy Short.

Queen, a resident of Kings Mountain who went on to earn bachelor’s and master’s degrees in education from WCU in 1973 and 1974 respectively and a doctorate from the University of Virginia in 1978, enjoyed a 40-year career as an educator that included time as a classroom teacher, school principal, college professor and academic administrator.

He retired in 2014 after spending the last half of his career as a professor at the University of North Carolina at Charlotte, where he served as chair of the Department of Educational Leadership.

In recognition of accomplishments that include groundbreaking research into how educators report suspected childhood abuse and the role of middle schools in successful student transitions into high school, the WCU Alumni Association presented Queen with the 2022 Academic Achievement Award.

“Much of Allen’s work in the education profession has centered on the areas of business, industry and government, and he has written numerous books and articles on those topics,” Allison Hinson, president of the WCU Alumni Association said. “He has led seminars and workshops across the United States and overseas, and his areas of specialization include children’s health and safety, time and stress management, and block scheduling.”

Queen credits WCU with taking a chance on the first-generation college student and thanks professors in the College of Education and Allied Professions for serving as mentors.

“The greatest support WCU gave me was by admitting me and giving me a chance to learn,” he said.  “One thing I remember about my professors my freshman year was their willingness to help individuals by going over tests and discussing ways to improve and suggesting ways to study.”

Queen points to WCU education professors Clarence Del Forge and Michael Davis as having the biggest impact on his career.

“Both served in the leadership of the Teacher Corps cycle in which I was a teacher intern. Dr. Davis was the director of the project and Dr. Del Forge directed the training program. Dr. Davis led my admission process and Dr. Del Forge taught me directly by hands-on participation and he provided a learning environment where I learned about the art and science of instruction,” Queen said. “No other instruction that I received, even in my doctoral program, provided the real-world experience of teaching.”

When Queen first arrived in Cullowhee, he did not think he would study toward a degree in education. “I did have a feeling it was something I might be pretty good at doing. I had picked up playing guitar early in my life and by the time I was playing in a rock group in high school, I was teaching some children how to play. It felt quite natural,” he said.

“When I started college classes, I thought I would enjoy studying economics, but as I investigated it further, I just felt it was not right for me. I was able to tell early in my college classes the professors who really loved teaching. I felt a desire to do that, and I changed to education,” Queen said.

In addition to earning two degrees at WCU, it was there that he first encountered Patsy Short, who would become his wife, in an art appreciation class. 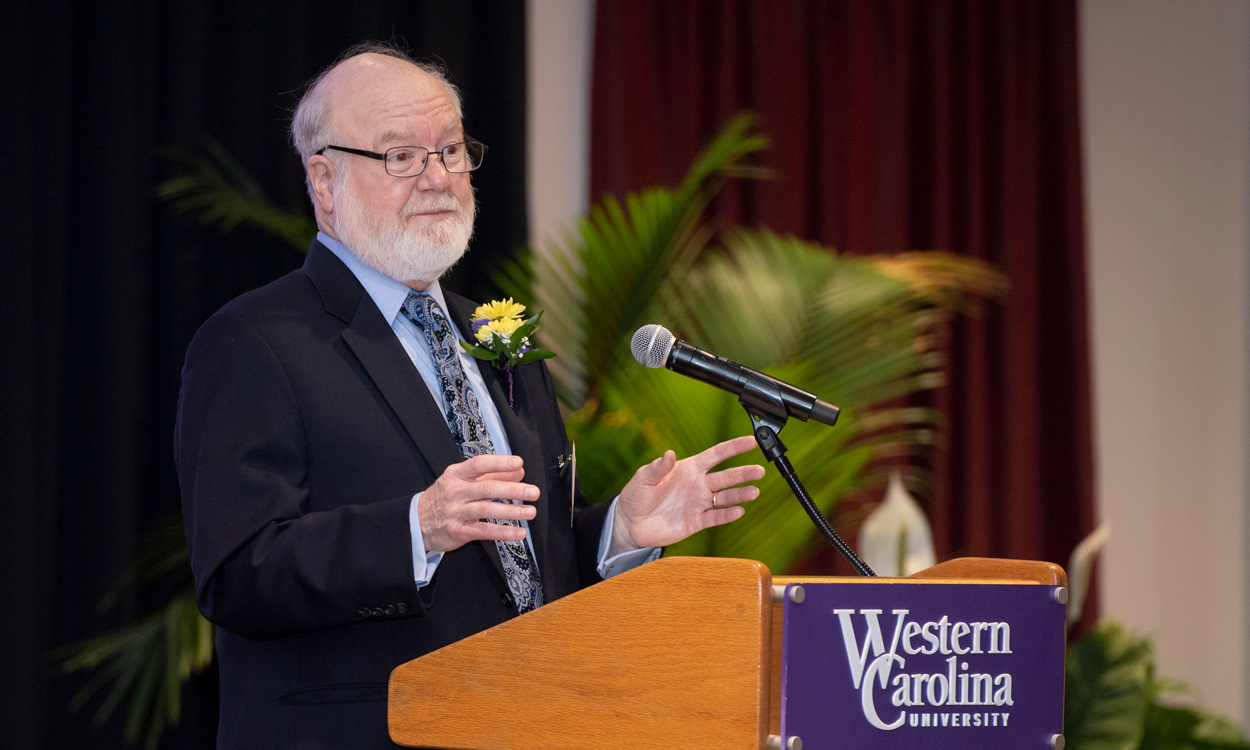 “One day about the third or fourth week in class, I arrived several minutes early and I saw this beautiful girl, dressed to the nines, complete with the freshman beanie sitting quietly with an empty desk to her right. I sat down, and years later she told me jokingly I had been extremely nosy with my barrage of questions,” Queen said.

“We had our first date a few days later after our first meeting. We went to the fancy restaurant on the third floor of the student union at that time. We walked later for hours and talked the entire time. I knew after the next few dates she was going to be my wife,” he said. They will celebrate their 50th anniversary Dec. 23.

She would become more than his wife. After graduating with bachelor’s degrees in education and nursing in 1973 and 1975 respectively and a master’s degree in nursing from the University of Texas, she became Queen’s frequent collaborator.

While both were teaching at Gardner-Webb University, they co-authored his first major publication, a 1980 article titled “A Workshop on Childhood Abuse and Neglect” in The Journal of School Health. The impact of the article and a series of radio and television presentations and related workshops throughout North Carolina conducted by the couple brought about major changes in local and state laws and in how educators identify and report suspected cases of childhood abuse or neglect.

Their shared interest in the topic came in part from seeing the results of physical childhood abuse firsthand, she in the hospital and he in the classroom, Queen said.

“We both had just started at Gardner-Webb. While research and publishing were not requirements for faculty at that time, I knew I eventually wanted to work in a research university. I had learned to love to write while I was a doctoral student and Patsy was a natural. Deeper though, I had been an emotionally abused child.  I found it therapeutic to write about the topic and eventually sought counseling about the abuse,” he said.

“While we did workshops and television appearances on the topic, our article had reached leadership in education and government in other states. While we do not take any responsibility for all 50 states that passed new laws and regulations within the next 10 years on the topic of childhood abuse and neglect, we hope we contributed in some small way to the changes and improvements,” he said.

In addition to his work in the area of childhood abuse, Queen also has conducted research into childhood obesity, student stress and responsible classroom management, student transitions and block scheduling, and has taught children’s karate. The common denominator is that all of those efforts focus on students’ physical, mental and emotional well-being, he said.

When asked which of his accomplishments he is most proud of, Queen narrowed it down to his appearance on ABC News in 2004 for a story about the importance of successful student transitions from elementary to middle school and middle school to high school.

“I had collected a large amount of national research on the topic, which I presented in two books and at several national conferences,” he said. “The research had generated much discussion on the best grade sequence design for students and the damage that extended transitions had on student achievement, drop-out rates and classroom involvement. The research led educators to start ninth grade transitional centers and ninth grade academies, and ignited a tense debate on middle school vs K-8 schools.”

Queen compared educators to the character Oz in “The Wizard of Oz,” helping shape lives of others from behind the curtain. “I would have to say there have been a lot of different individuals and groups playing Oz in my life. I hope I have served as Oz to many,” he said.

“One fear that has always bothered me is the question of how many people like Einstein, Lincoln, Emerson, Madame Curie, Shelley, Gates, Jobs and others have we as educators not been able to see the underlying potential and they have slipped away into oblivion? I have no answer to my fear, but I am most grateful for the wisdom and foresight that WCU saw in me as a rejected high school senior and I hope I have had a small impact on the importance of giving marginal students the benefit of the doubt and allow them to pursue their education,” Queen said.