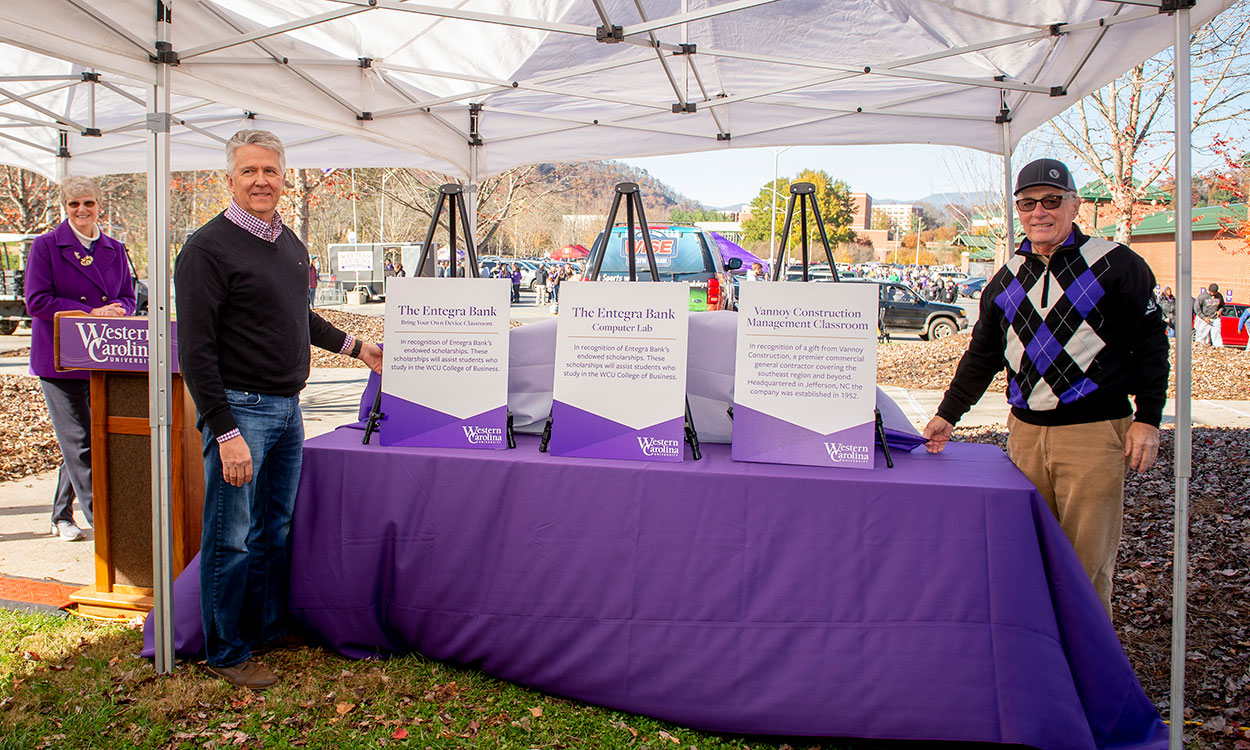 Roger Plemens (left), president and CEO of Entegra Bank, and Mark Vannoy (right), who owns Vannoy Construction with his brother, Eddie Vannoy, show off the language that appears on plaques that have been installed at WCU’s newly named classrooms, as Interim Chancellor Alison Morrison-Shetlar (background, left) looks on.

“Today, we celebrate two outstanding corporate partners – Entegra Bank and Vannoy Construction,” WCU Interim Chancellor Alison Morrison-Shetlar said during a ceremony to commemorate the naming of the rooms. “Gifts from these two partners span across multiple colleges for scholarship and programmatic support. For this vast impact, we are grateful. They are indeed changing lives with their support.”

Under the leadership of President and CEO Roger Plemens, a 1977 graduate of WCU, Entegra Bank’s board of directors in July announced a $250,000 contribution to provide scholarship assistance to students from the region who want to study in WCU’s College of Business. The gift was in recognition that more than 20 percent of the financial institution’s workforce in Western North Carolina graduated from WCU.

The bank previously established the Michael Morgan Memorial Scholarship Fund in 2007 with an initial gift of $25,000 in honor of Morgan, a 1984 finance graduate of WCU who served as the bank’s first vice president and chief lending officer.

Over the years, Entegra Bank has given more than $370,000 to WCU, including support for the Friends of the Arts organization, the Catamount athletics program, the College of Business, and several other areas across the university, Morrison-Shetlar said.

The company previously made a gift of $4,500 in 2016 through a partnership with engineering faculty members to provide support for student experiential learning in construction management.

The newly named Entegra Bank Computer Lab has 42 individual workstations used by students in computer information systems, marketing and sport management courses, while the Entegra Bank “Bring Your Own Device” Classroom is a flexible space designed to accommodate a variety of teaching pedagogies for classes within the College of Business and College of Arts and Sciences.

The Vannoy Construction Management Classroom is home to most of WCU’s construction management classes, including those focused on surveying, green building and sustainability, and mechanical and electrical construction.

The gifts from Entegra Bank and Vannoy Construction are part of WCU’s “Lead the Way: A Campaign Inspired by The Belcher Years.”

To learn more about how to make a corporate gift, please click here.