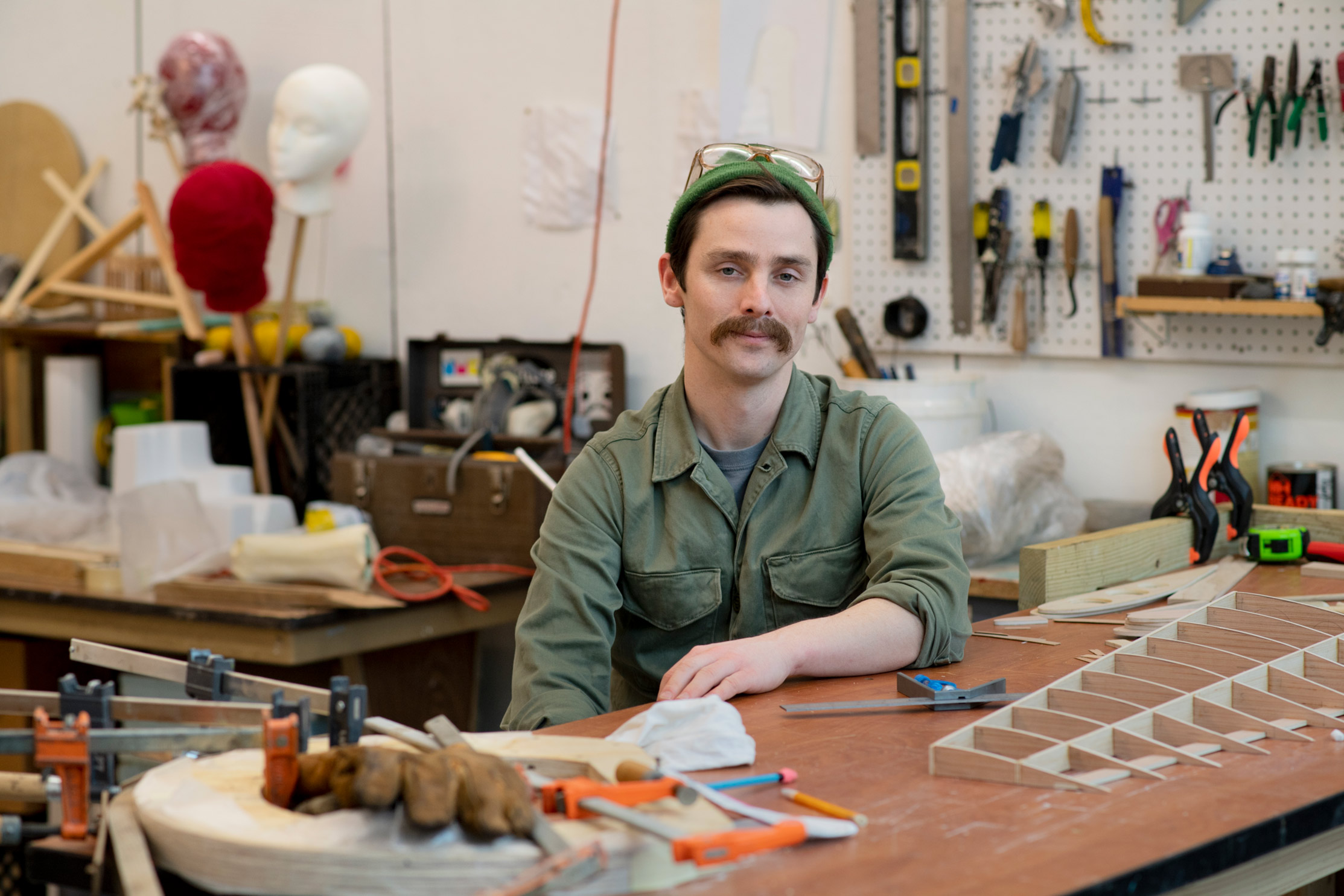 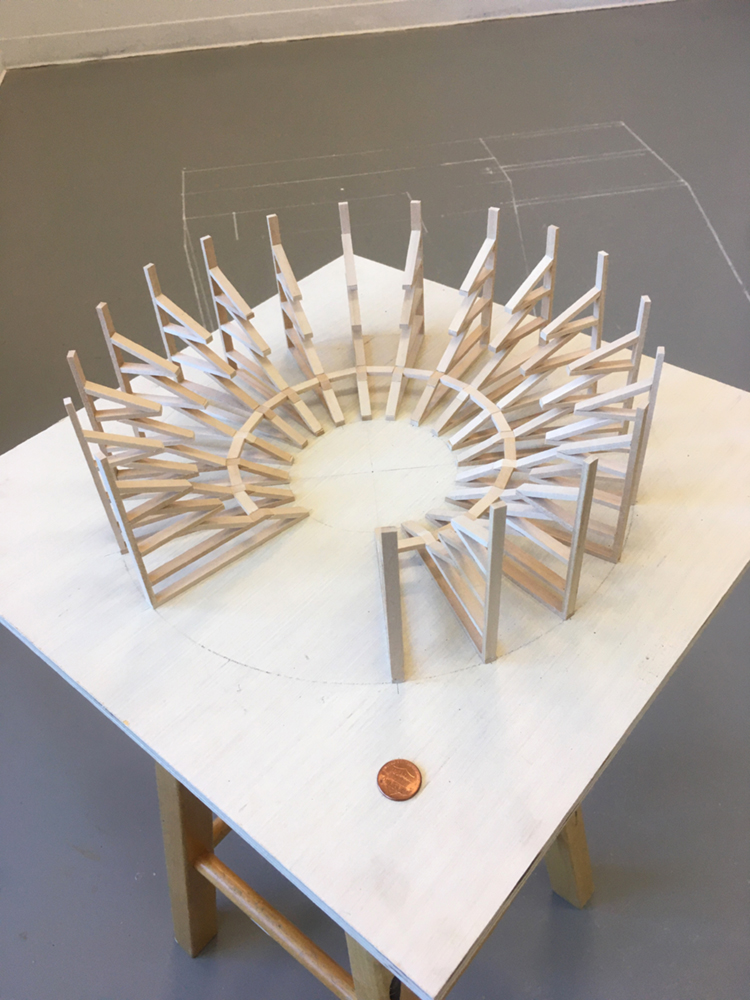 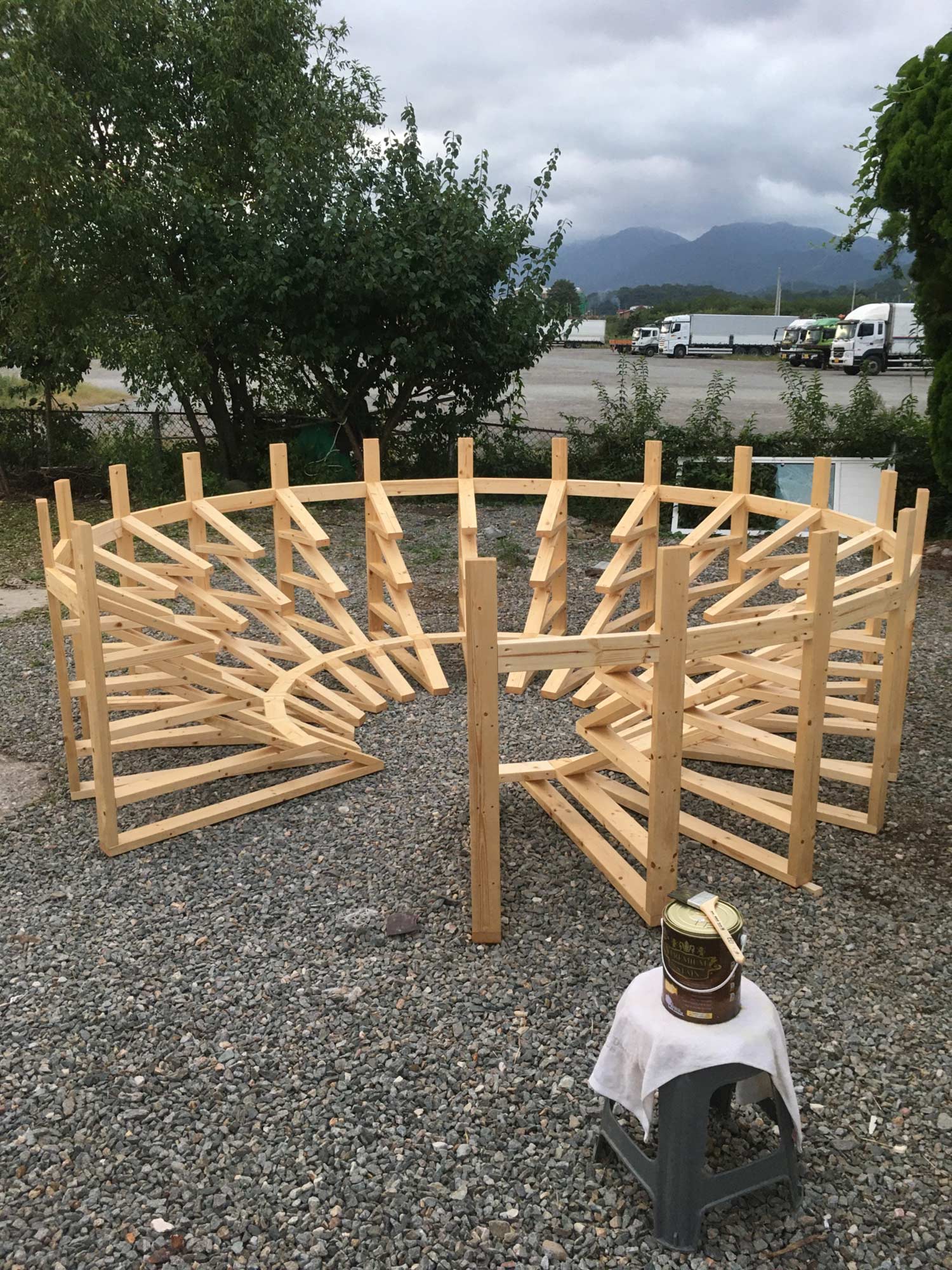 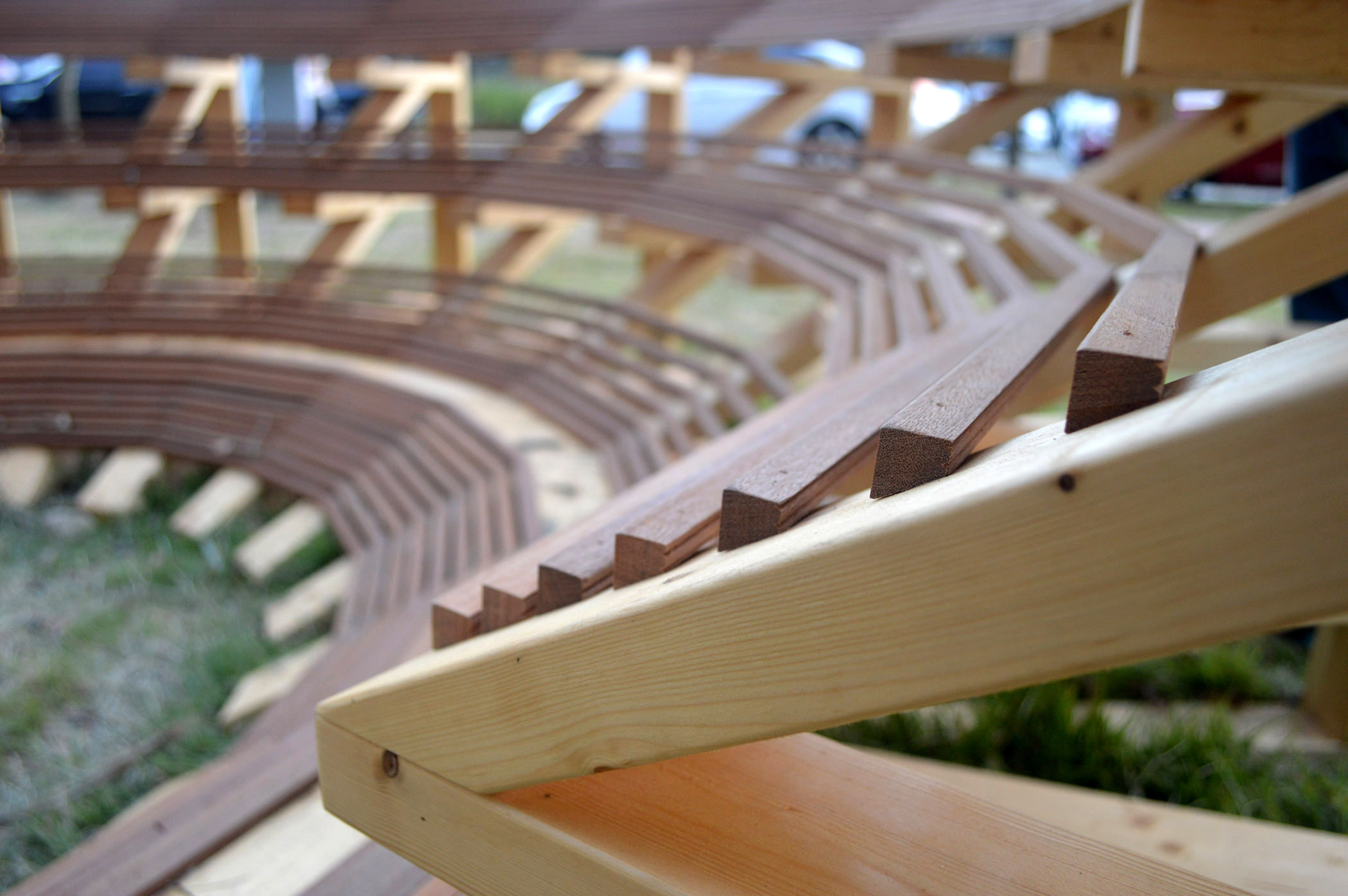 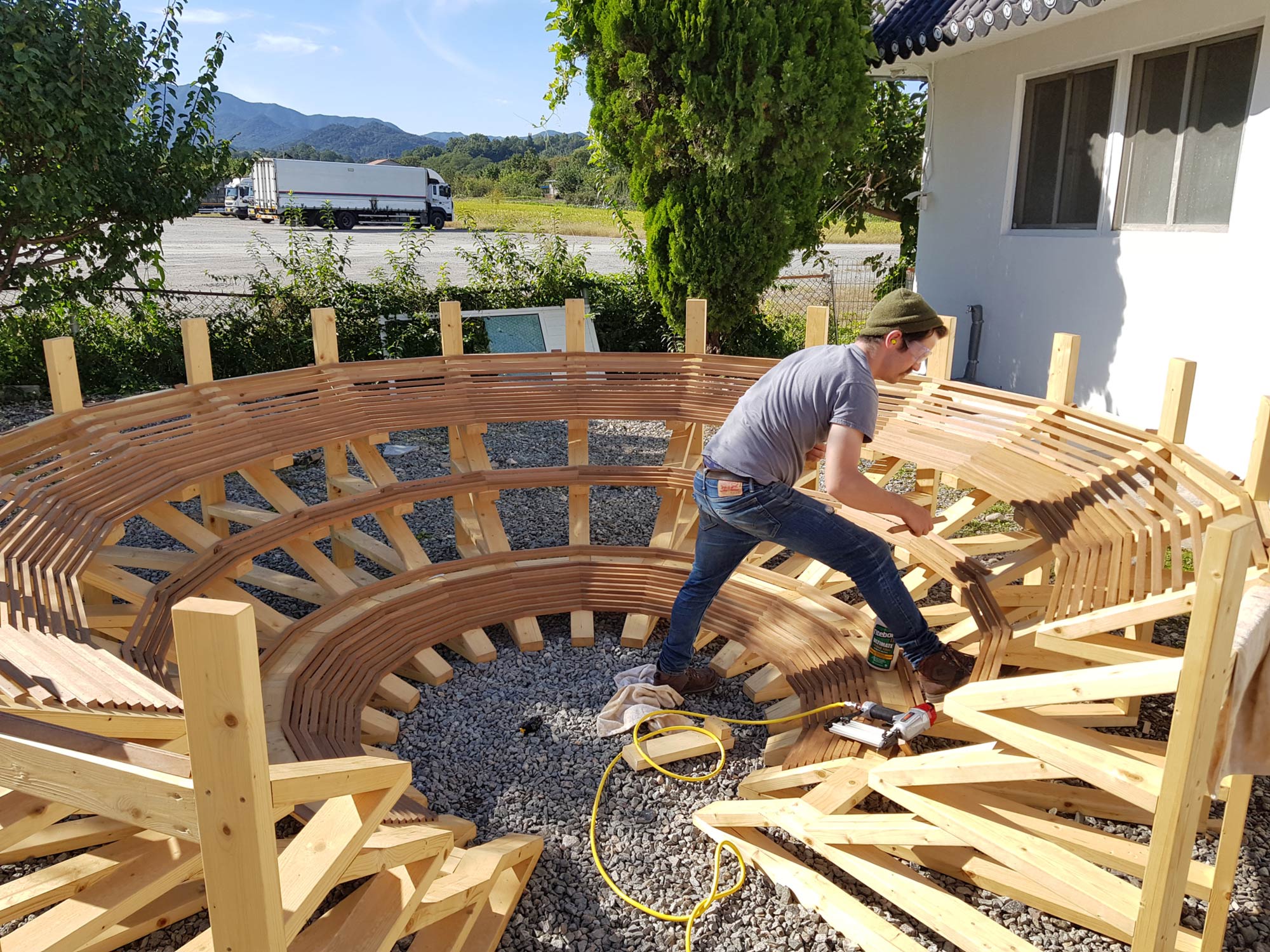 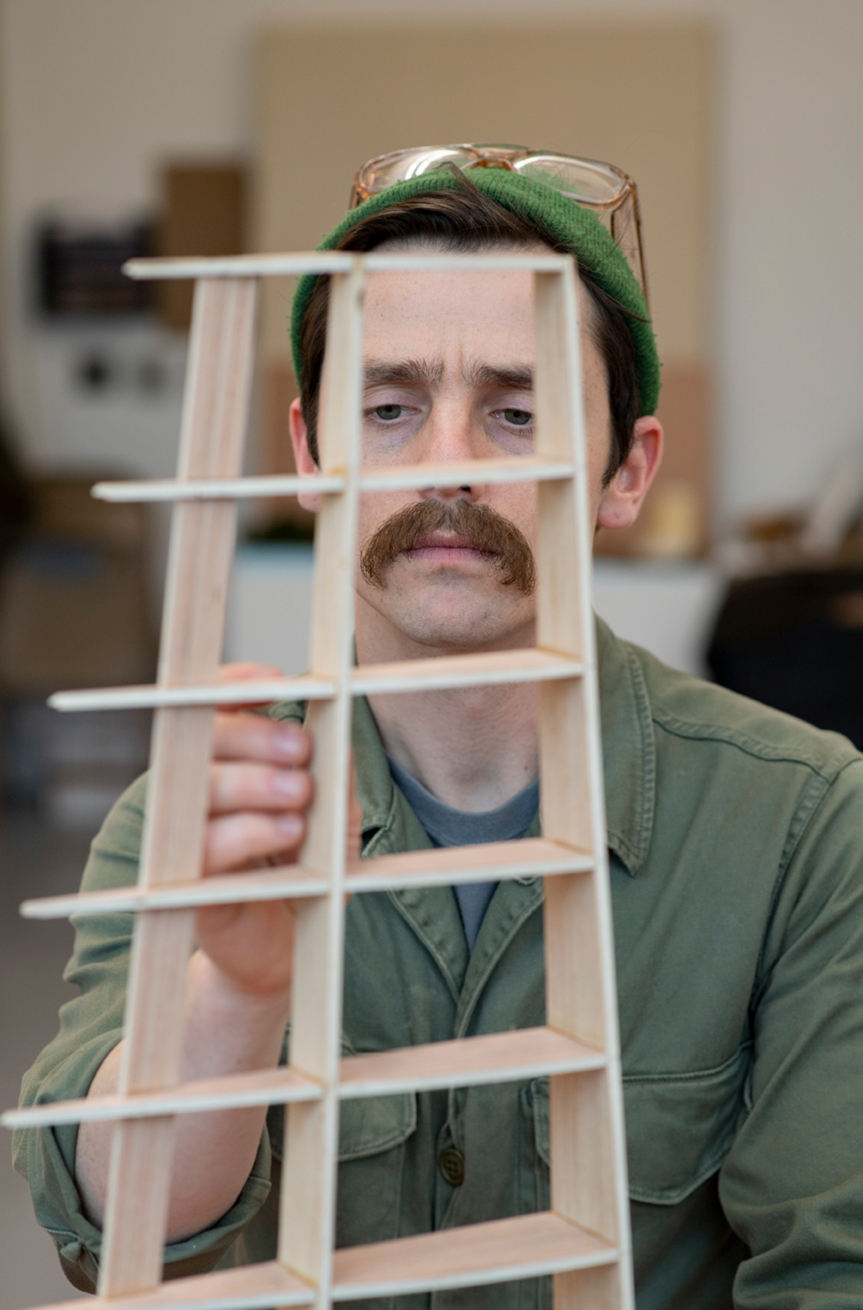 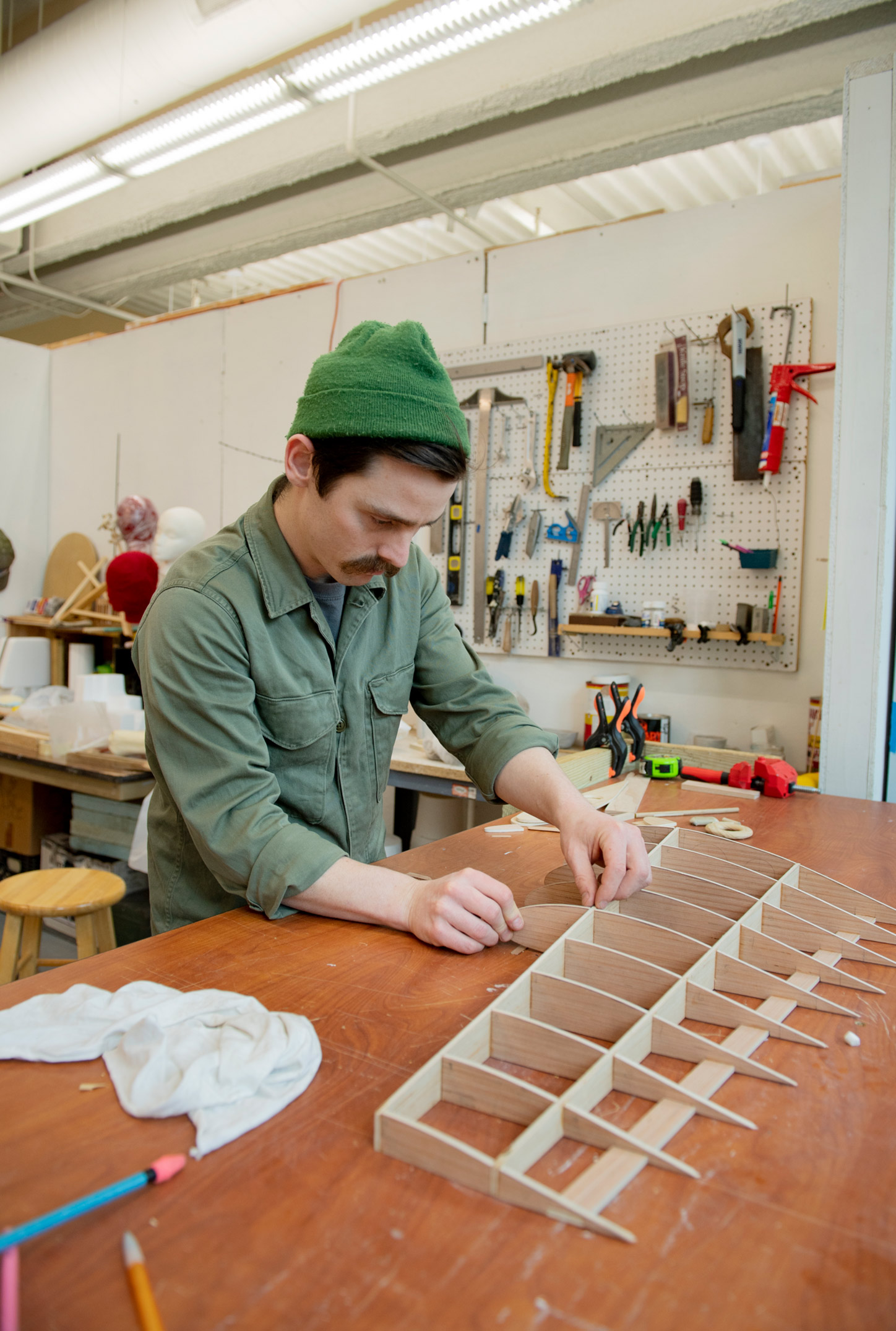 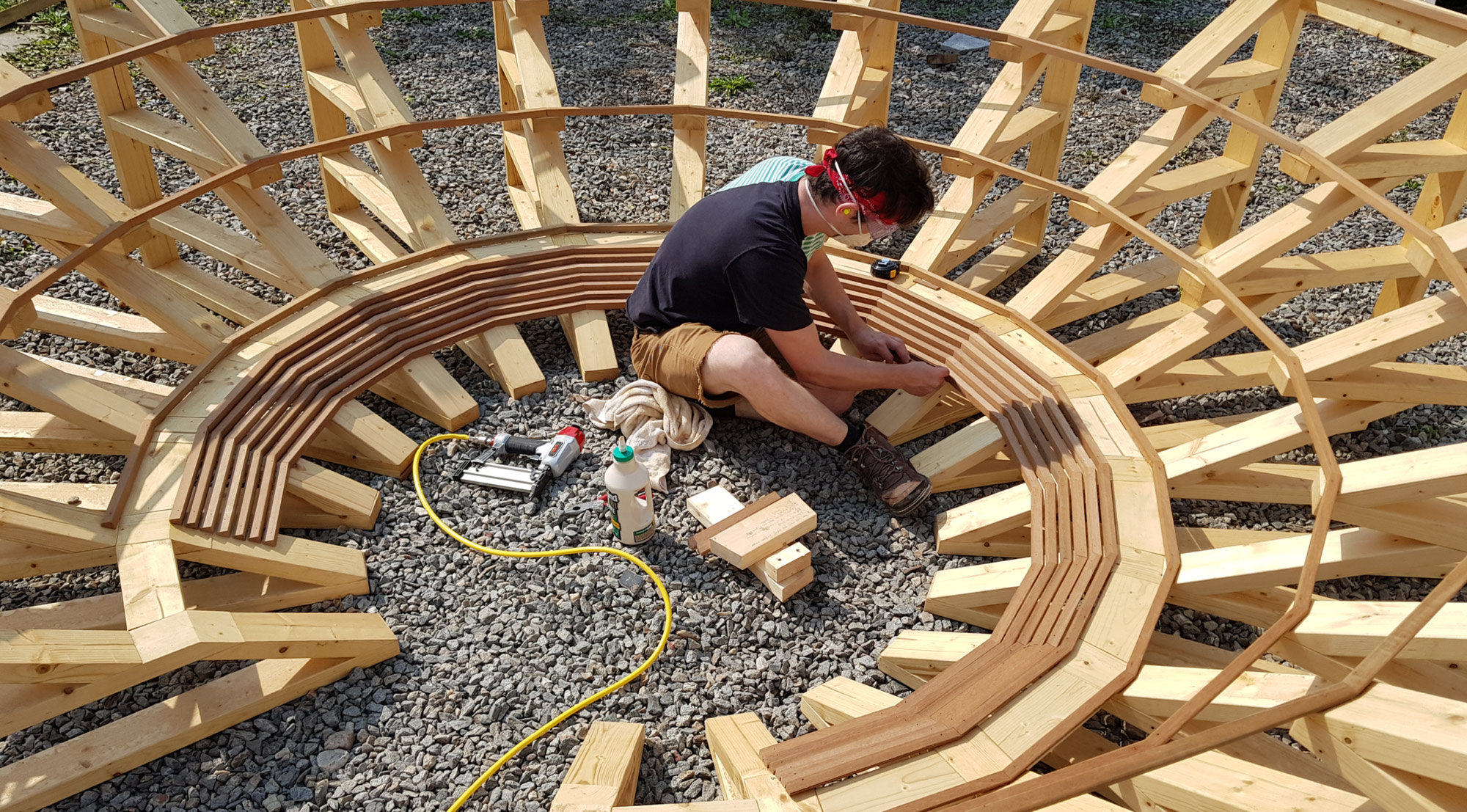 Eli Blasko Leaves a Unique Mark in His “Dream” Country

The stadium is stunning, a beautiful geometric design built from contrasting woods that highlight the warmth and strength of the handcrafted structure. Sited in a public green space, surrounded by grass and trees, the small-scale model invites passersby to step inside and imagine its power — exactly what its builder had in mind.

“I intended for people to interact with it. You can’t really put stuff in public space and expect people not to touch it,” said Eli Blasko, a graduate student in the master of fine arts program at Western Carolina University. “There are kids climbing around on it and adults leaning on it. I definitely built it soundly with that in mind.”

Blasko conceived, designed and built the “Stadium” for inclusion in the Damyang International Art Festival 2019 in Damyang County, a suburb of Gwangzu, South Korea.  He was one of 10 international artists chosen to participate in the festival held last October, and one of only two of the 10 who were students. The rest were professional, full-time working artists. His roommate was a full-time art professor in India. Tom Ashcraft, MFA director for WCU’s School of Art and Design, urged Blasko to apply. “He was like, ‘this is right up your alley’,” said Blasko, a sculptor, woodworker and public artist.

Ashcraft said Blasko had the talent to make it happen. “The Damyang International Art Festival connection was one of those wonderful serendipitous moments when professional practice converges with academic study,” Ashcraft said. “Eli wound up creating a significant artwork alongside other international artists, in a contemporary context, as a peer and global citizen. This framework is critical in establishing a career as an artist.”

A popular domestic tourist destination of mountains, bamboo forests and rivers, Damyang is the green capital of South Korea, “where nature and the natural world play a big role in the whole brand of the city,” Blasko said.

“It’s just a really beautiful place,” he said. “That’s why they wanted the art to be a natural focus. They didn’t want anything that was going to leave a significant imprint.”

Blasko spent about three and a half weeks in Korea — from late September to late October — where he lived in a boutique hotel with other artists from Korea, Germany, France, Canada, the United States, Mexico, India and Israel, an arrangement he appreciated because he could watch his fellow artists in action. “My roommate was super intuitive,” Blasko said of Rajash Thachan of India, who used a truck load of scrap wood to build his design, “A Tale Never Loses in the Telling.” “He would just walk over to his pile of wood, light up a cigarette, pick up a few pieces and hold them up to his body.  Then he would stick blocks of wood together and then carve away. By the end of it, it was this beautiful, well-rendered figure that’s a little bit larger than human scale,” Blasko said.

Festival organizers supplied them with the tools and materials they needed to build their artwork, which were installed along the Gwanbang Forest Road (a forest path, really), a designated natural monument that served as the festival site.  Festival-goers walked along the forest path to view each installation.

So why a stadium? Blasko said he had been wanting to work with a coliseum-like form as a symbol of how architecture controls spaces and reflects power or “cultural clout” in communities. “Just thinking about the amount of resources and energy that go in to building one of these things for a municipality — it’s a way to flex your civic muscle,” he said. “It’s like this larger-than-life thing that we usually stand in awe of. I thought it would be really interesting to take that huge symbol of power and reduce it to this very human scale thing, where you’re almost like a giant exploring it and you can look at it a little more objectively, where it’s not this thing that’s towering over you.”

Blasko built the stadium in about two and a half weeks using Douglas Fir 2 x 4s for the base and Bengkirai, a common Indonesian hardwood, for the narrow plank-style seating. The entire piece is 12 feet in diameter and 4 ½ feet tall. The Bengkirai’s dark rich color offers a warm contrast to the lighter Douglas Fir. “I liked them because they are just building materials that your average Korean person would be very familiar with,” Blasko said of his choice of woods. “All the shops had decks made out of those two materials.”

While the artists stayed about a month in Korea, their artwork remained in place until Dec. 31, Blasko said. Some pieces were dismantled, while others, like his, were moved to a private art space in hope of finding a buyer. “A lot of them were just biodegradable materials,” he said. “The others that were more well-made were moved to the permanent collection of that art space.”

Now that he’s back on campus, Blasko is focused on completing his degree and expanding his artwork. “I never would have applied for something like this, but being in school here, one of the things I want to do while I’m getting my master’s degree is to continue to build my public art portfolio because that’s what I’m interested in,” he said. “The Damyang art festival seemed like a good opportunity to do that, and I’ve always wanted to go to South Korea. That was one of my dream countries, so it was perfect.”

Ashcraft said WCU’s MFA program is structured to provide artists like Blasko with a deep and rigorous residential experience for independent creative research and studio art exposure. “Eli’s experience also benefits our program. He was an ambassador for the MFA program and WCU. It also helps establish an important educational and mentorship connection with the undergraduate students he works with in the School of Art and Design.”

While Blasko may be back in the states, his new-found artist friends are only a text away. “It was a real great community and a really good experience,” he said. “I was real bummed that I was leaving all of them, but we still have a group chat that we send new work to.”

About the Master's of Fine Arts Program 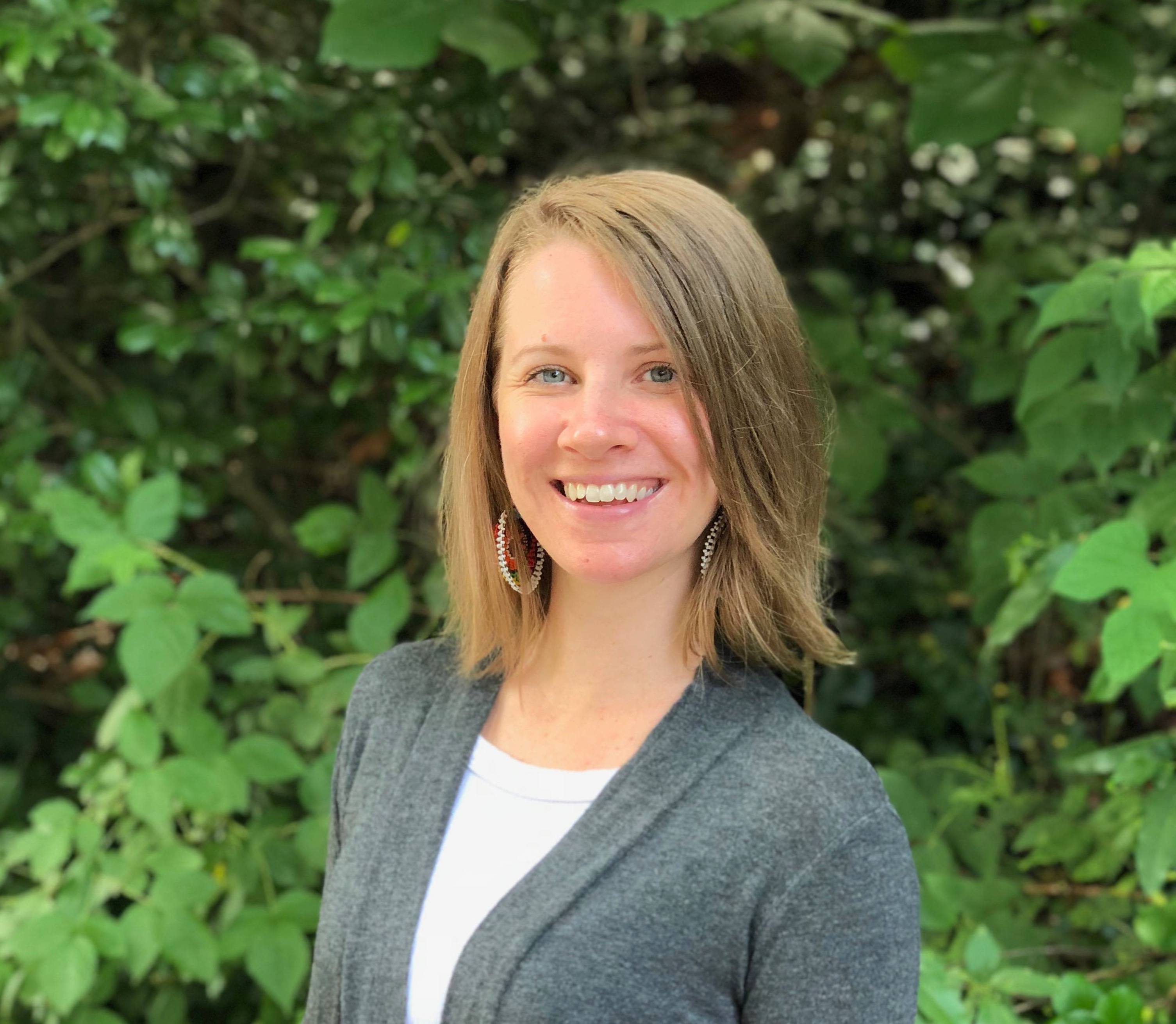 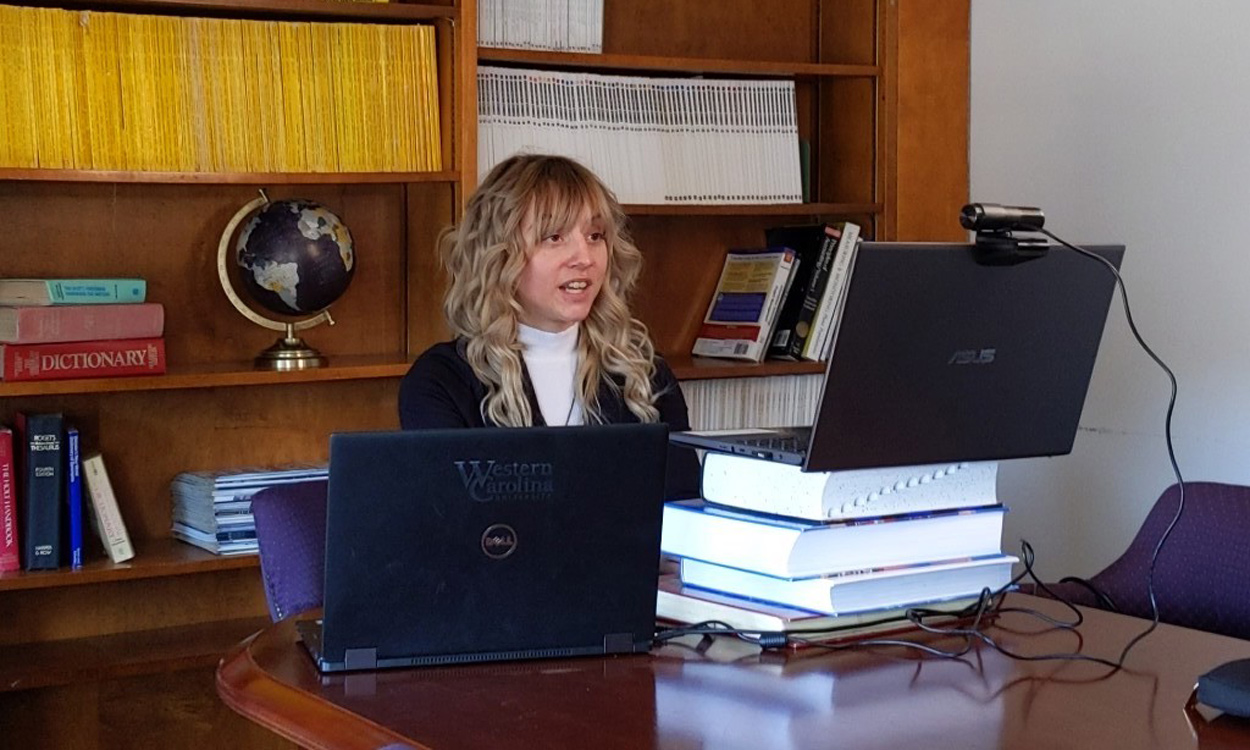