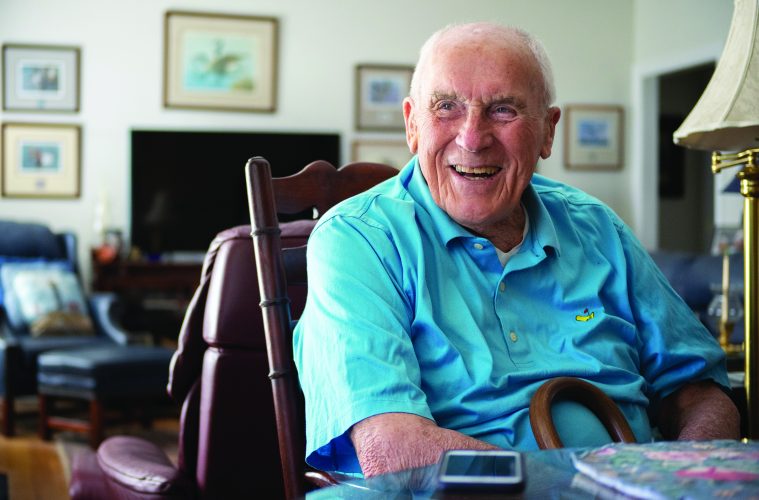 The team was led by numerous World Word II veterans who had returned home and enrolled at WCTC, thanks to the GI Bill.

In the fall of 1945, faculty members, administrators and local businessmen rallied WCTC President H.T. Hunter to reinstate football, which had been suspended during the 1942 to 1044 seasons because of World War II, declaring it would be good for the community. They made the case for a new stadium to be built in honor of former students and employees who had lost their lives during the war.

By the time the 1949 season arrived, the new Memorial Stadium was ready and Catamount football had found its feet, placing second in the conference with a 7-3 record the previous year behind the leadership of its World War II veterans and Coach Tom Young. The football field had become a new battleground of sorts, where these now-seasoned young men could put their well-honed leadership skills to work. Dan Robinson, a senior tackle and a Navy veteran, was among them.

“I think having the military experience gave me a lot of self confidence,” said Robinson, 92, of Cullowhee. “You felt like you probably could do things that you couldn’t do, and that was good as far as football.”

Robinson enlisted on his 17th birthday, on July 17, 1943, much to his mother’s disapproval. She already had one son in the service. “My mother just about skinned my head,” Robinson said of his mother’s reaction to the military recruiter he brought home to get her signature on the enlistment papers. “She asked the recruiter to excuse us for a minute. She wanted to have a talk with me, and I knew it was coming. She said, ‘Dan, you ought to wait a year. You think you’re a man, but you’re not. You’re a boy.’ And then she said — and this really opened my eyes — she said, ‘Dan, I’d rather get a report that you were dead as to get one that you had been dishonorably discharged. You want me to sign the papers?’ And I said, ‘Sign the papers,’” Robinson said. “They couldn’t have run me off.”

Robinson spent 33 months in the Navy, growing into the man his mother had wanted him to be and into a leader who would one day serve WCU as its head football coach and the region as a state senator. He spent about half of his nearly three years in the Navy as a gunner’s mate, keeping his ship’s anti-aircraft guns trained on the sky on D-Day, while his boat hauled Canadian soldiers to Juno Beach, then converted to a floating hospital to care for the wounded. Later, he and his crew would transport prisoners and ammunition for Gen. George Patton.

When the war ended, Robinson came home and enrolled at WCTC in the fall of 1946. He was 21. He also wanted to play football. It helped that a new football coach came calling. “Tom Young came down and talked with me,” Robinson said. “He was gambling, but he gave me a scholarship. I had a scholarship and the GI Bill, so I had a little change in my pocket.”

Robinson remembers that while he and his fellow veterans acclimated to life as football players, some of their old military habits refused to die, much to the chagrin of their coach. “We were bad to play poker,” Robinson remembered. “And Coach Young absolutely did not want us playing poker. It drove him up the wall. We were playing Newberry College and they had a bunk room. We had a game going and were playing on a bed and had money all around. Coach Young happened to walk in. I’m telling you what, he said, ‘Let me check this out. I want to make sure there are no pink-faced kids in this.’”

Robinson, who graduated from WCTC in 1950 with a degree in physical education, coached high school football before returning to Western in 1956 to serve as the Catamounts head coach for the next 13 years. “The major problem that Western had was budget,” Robinson said. “We’d pack lunches on trips — literally. My record overall was so-so because we had the fewest scholarships in the league.”

Robinson said grouse hunting kept him alive during those stressful years as the Catamounts head coach, an activity he had to stop because of his bad back. He has limited mobility, and he walks with a cane. “I could walk ten miles in these mountains in a day and hunt grouse,” he said. “I loved every minute I was out there. I really think it saved my life. When I got out there with that bird dog I didn’t have any stress.”

Robinson’s leadership continued throughout Western North Carolina when he was elected to serve as a Democratic member of the N.C. Senate from 1999 to 2002 representing District 29 and helping to secure $98.4 million for WCU during Chancellor John W. Bardo’s tenure as part of a $3.1 billion bond issue.  Always a competitor, Robinson said he and Bardo tag-teamed to persuade Marc Basnight, then president pro tempore of the Senate, to get the money they believed WCU deserved, especially if it was more than arch rival Appalachian State. The initial offering by the budget committee was $38 million, Robinson said. “Well, Bardo’s face got as long as my arm and he said, ‘Surely, we can get more than that, Dan.’ They did.

Robinson lives with his wife of 57 years, Jean, near campus.