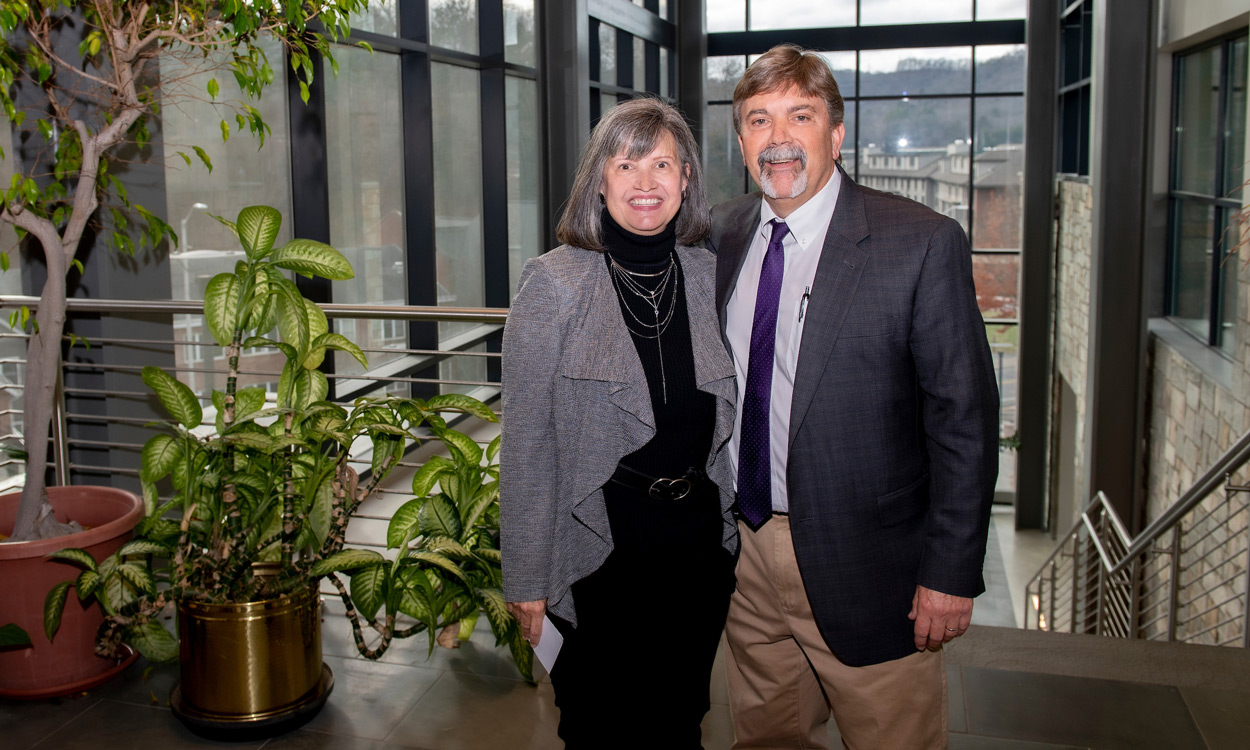 Keith Corzine (right), with his wife Kim, will retire Jan. 1 after working more than 34 years at WCU.

The recent establishment of an endowed scholarship fund in his honor by the man who gave him his first job in the student housing profession serves as more than fitting recognition for the contributions of a 34-plus-year employee of Western Carolina University’s Division of Student Affairs.

It also provides opportunity for Keith Corzine, who is stepping down Jan. 1 as associate vice chancellor for auxiliary enterprises, to reflect on a career that has overseen the construction of nine new residence halls and one dining hall, the demolition of four outdated dormitories and one cafeteria, and the renovation of one residence hall and one dining facility.

Former N.C. Sen. Thomas Apodaca and his family have established the Keith Corzine Residential Living Endowed Scholarship to honor Corzine, whom he hired as a resident assistant in Albright-Benton Residence Hall in 1980. Little did they both know that would launch a decades-long career in student housing administration.

Corzine continued to serve as an RA in Albright-Benton through the 1980-1981 academic year, later becoming head resident. After graduating from WCU in 1982, he went to work for his father, a general contractor in Haywood County, for what was intended as a stop-gap to buy a year but ended up lasting six years. In that job, he gained an appreciation for the construction industry. It was that combination of experience in student housing and construction, plus a degree in management, that caught the attention of WCU’s then-director of housing, Randy Rice.

Rice hired Corzine in June 1988 as facilities coordinator for student housing. “I coordinated all the maintenance in all the residence halls and ended up doing that for 11 years, which foundationally was good for me in terms of growth, learning to work and being disciplined,” Corzine said.

Corzine was promoted the position of assistant director of facilities in 1999, with responsibility for construction in addition to maintenance of residence halls. He continued in that role for three years, served as interim director of residential living for nine months and was named director in 2002, a position he held for 11 years.

The arrival of David O. Belcher as chancellor in 2011 led to some major administrative reorganization in 2013. “Vice Chancellor for Student Affairs Sam Miller gained some stuff, and some of that stuff he so graciously handed to me,” said Corzine.

With the administrative changes, Corzine was promoted to his current role of associate vice chancellor for auxiliary enterprises in the Division of Student Affairs with additional responsibility for dining services, the campus bookstore, Cat Card and electronic access. After the arrival of Kelli R. Brown as chancellor in 2019, he also gained responsibility for the print shop and mail services.

Corzine has seen a lot of changes to campus over the years and, in fact, played a significant role in many of them, beginning with the construction of the Village, Norton and Judaculla (formerly known as Central Drive) halls. ”All the new construction and renovations since 2002 were my team’s responsibility to deliver,” he said. “I am most proud of how we collectively worked to replace Leatherwood and Helder residence halls and Dodson Cafeteria with what became Balsam and Blue Ridge residence halls and Courtyard Dining Hall, with the fountain and the plaza.”

Beginning in 2007 and completed in 2010, those projects required a coordinated approach, with the demolition of Helder taking place first, followed by construction of the new dining hall on that site, with the flattening of Dodson making room for Balsam before Leatherwood was taken down and replaced by Blue Ridge.

“It would have been extremely difficult to do any kind of renovation of Helder and Leatherwood because of the way they were designed,” Corzine said. “It was truly a matter of putting lipstick on a pig. We hate to see buildings go away, but unfortunately they had to go away. Fortunately, it gave us an opportunity.”

While Corzine believes the project that most benefited WCU was the replacement of Leatherwood, Helder and Dodson with Courtyard, Blue Ridge and Balsam, a different project is his personal favorite – the resurrection of Brown Dining Hall.

Built in 1959, Brown had fallen into disrepair after dining operations moved out of the structure when Courtyard Dining Hall opened its doors, but an increase in student enrollment created demand for food service venues. After undergoing a $22.5 million renovation and expansion, the building reopened in 2017 with modern student dining facilities, a convenience store, and offices for the departments of Residential Living, Campus Services and Student Community Ethics.

“Of all the meals I ate on campus as a student, 99% of those were in Brown, and the same applies to many alumni of that era,” Corzine said. “I’m pleased we were able to save Brown, which was in need of love and was certainly viewed as maybe it would be better tear it down and start from scratch. Designers did an incredible job with how this building played out, to keep it, give it life and let the next generations enjoy it.”

As he nears retirement, he said he is glad to be able to bring one more project across the finish line – the replacement of Scott and Walker residence halls with Shining Rock and Water Rock halls, which opened this fall, and Black Rock Residence Hall, scheduled to open for the 2023 spring semester. Collectively, the 932-bad facilities are known as “The Rocks.”

“Scott and Walker served our students and our institution well, but it came time for them to go. I figure I’m the record-holder, because no one has ever stayed in Scott more than me. From 1990 until summer of 2017, I had an office in Scott,” Corzine said. “I’m extremely proud of how The Rocks have played out. I think these new buildings are great. Students seem to love them, and everyone likes the aesthetics of how it looks when you drive into campus, compared to how Scott and Walker looked.”

Other projects that came to fruition under Corzine’s watch are the construction of Levern Hamlin Allen Hall between Brown and Judaculla halls and replacement of an old commercial strip along Centennial Drive with the mixed-use building Noble Hall, featuring restaurants and businesses on the ground floor and student rooms on the upper levels. 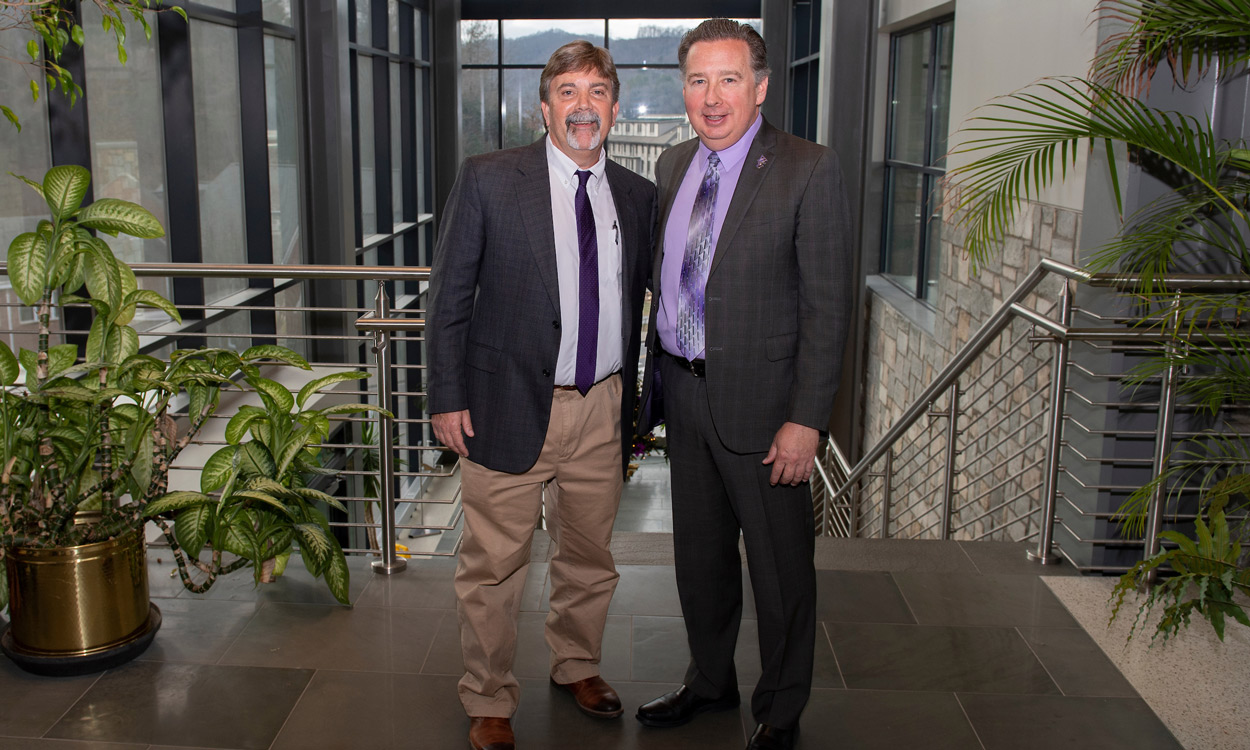 Corzine was already a key member of the Division of Student Affairs leadership team when Sam Miller was named vice chancellor for student affairs. “Over the 15 years I’ve worked with Keith, he has proven to be a thoughtful, proactive leader always seeking the ‘greater good’ for WCU,” Miller said. “From ground-breakings and ribbon-cuttings to brainstorming and operational assessments, he has contributed to numerous construction projects and change initiatives that have enhanced experiences and services for the benefit of our students.”

For all his accomplishments in the bricks-and-mortar department, Corzine’s greatest legacy is his “human-capital construction prowess,” said Phil Cauley, associate vice chancellor for undergraduate enrollment.

“Keith has always championed a student-centric pursuit of the ‘Road to Happy.’ Keith continually invests in his colleagues, Yes, Keith has deftly navigated succession planning for residence halls. But better than brick-and-mortar succession planning, Keith has invested in flesh-and-blood succession planning to such an extent that he has paved the way for qualified and capable successors. He has mentored his understudies how to ‘Live Western,’” Cauley said.

Corzine said he also is proud of the PEAKS program, a residential first-year experience for freshmen designed to create a caring community that provides new students with a strong foundation for their academic career at WCU and helps them make the transition from high school to college life.

“Prior to PEAKS, we hadn’t housed first-year students together,” he said. “We basically comingled everybody. We weren’t co-ed then, so you had your genders together, but we didn’t worry about housing a fifth-year senior with a first-time freshman. I believe the move toward a first-year residential experience like PEAKS really benefited us long-term.”

Corzine said he is looking forward to spending time with his wife of almost 39 years, Kim, camping, traveling and visiting grandchildren on the coast. “We were high school sweethearts at Pisgah High School. She was a year younger than me,” he said. “I went to Western, she went to N.C. State. We survived that distance. It wasn’t always pretty, but we survived it.”

He also will remain involved with Full Spectrum Farms, and serves as president of the board of the local nonprofit that serves people on the autism spectrum That’s something near and dear to him as the parent of a special needs child.

While he knows the time is right to “go the house,” he said he will miss those he considers his work family. “There have been so many wonderful people I have had the pleasure of supervising, managing, collaborating with and working for during my career,” he said. “That’s what makes working at Western so very special.”

Cauley counts himself among the members of Corzine’s work family. “Keith is quick to share successes and share credit where credit is due. Over the years, Keith and I have walked many a mile together at lunch, and he is a listener and one who was willing to share and help bear my burdens. He shared genuine interest in me, in my family and in how things were going or not going,” he said.

“He was a collaborator who was willing to share in the workload for the good of students, the division and the university. He was an encourager and someone who had your back. He was one who shared his expertise to teach others how to fish for themselves rather than making folks dependent upon him to always provide the fish,” Cauley said.

Speaking of family, his actual family has deep roots in Cullowhee. Wife Kim Corzine, a retired educator, earned bachelor’s, master’s and education specialist degrees from WCU, and father Tom Corzine, a first-generation college graduate, earned his bachelor’s degree while he and mother Clarene lived in a travel trailer in Boodleville, a community of prefabricated housing obtained from the military, which was home to many of Western’s married veterans after World War II.

“It’s been a great career, he said. “As you’re walking out the door, you get to thinking about it, and the one thing I keep coming back to is what we’ve been able to do for a living. We helped create better citizens and better adults. In theory, every action that we have given to Western Carolina University in some way is intended to help the greater good. How few people actually get to say that, they spent their career in that way?

“Sure, there were probably lots of other areas or careers that would have paid better, but I would argue that I had a good living, get to walk away with benefits and retirement. In the end, the reward is worth it. I drive by it everyday leaving my house. I’ll see the results of my career for the rest of my life. I’ll just drive by campus and keep grinning like a possum,” Corzine said. 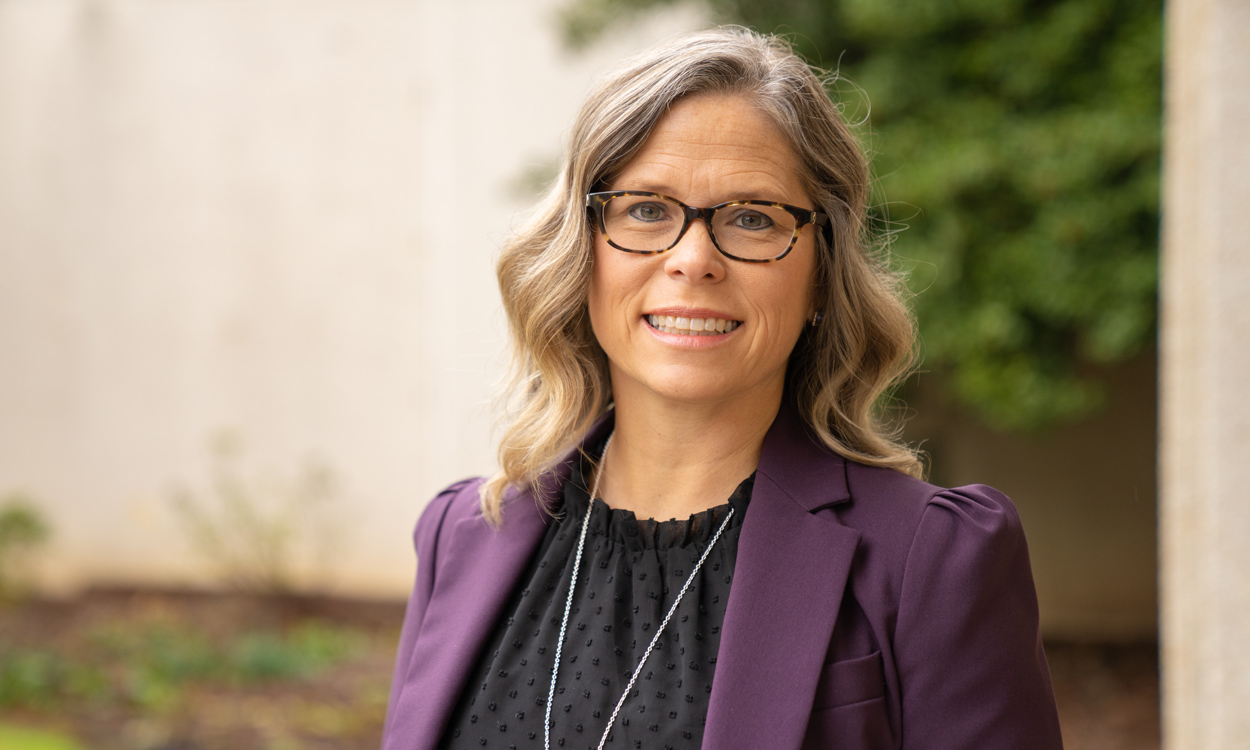 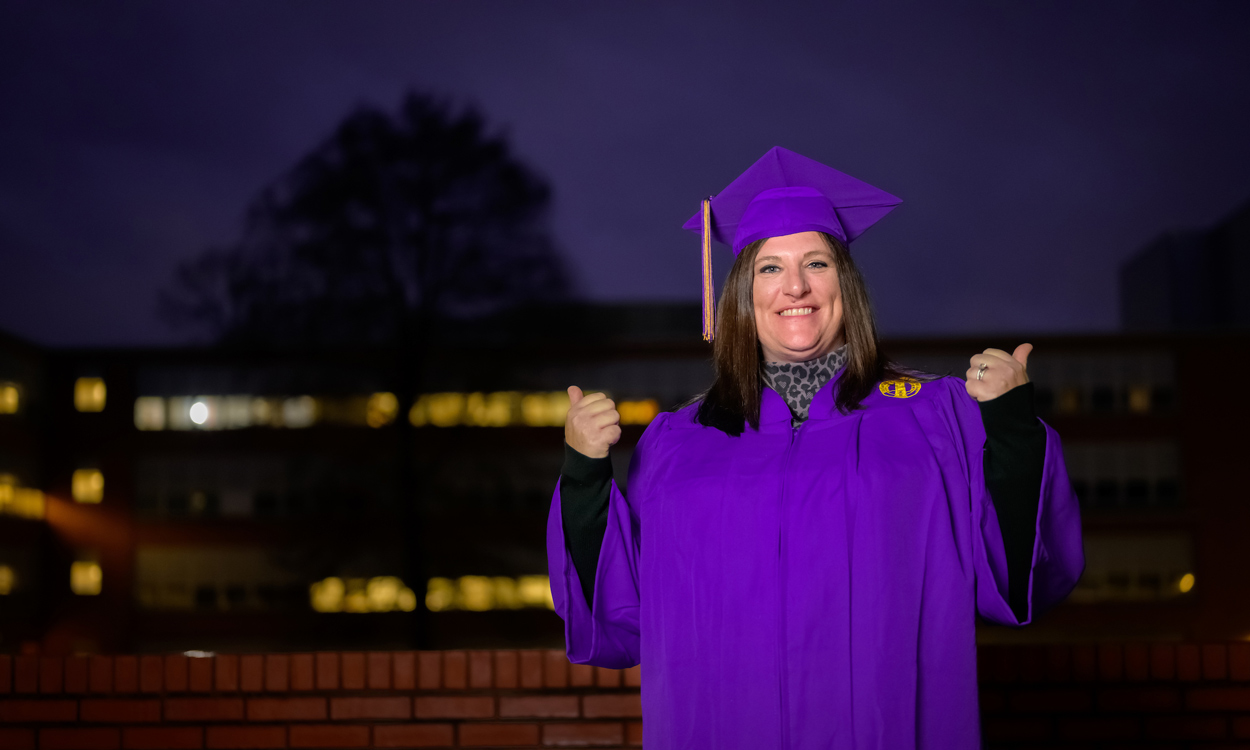