Luís Paulo Hemmer is an international student from Santa Catarina, Brazil. Hemmer will graduate with his master’s degree in business administration. Hemmer’s decision to pursue his master’s abroad seemed like a leap of faith to some, but he wanted to prove that his vision could be reality.

Hemmer obtained his undergraduate degree in civil engineering in Brazil. The engineering program provided an opportunity for work experience abroad and Hemmer ended up at the Cataloochee Ski Area in Maggie Valley. He was in Western North Carolina from December 2018 to late February of 2019.

At Cataloochee, Hemmer visited the United States for the first time, saw snow for the time and learned how to snowboard. It was also at Cataloochee where he met his girlfriend, a current student at Appalachian State University. “I saw her carrying the skis and I said, ‘Oh, that’s the one,’” said Hemmer. “I couldn’t have made it without her. She encouraged me to come here, but she’s also a part of everything. She’s always supporting me. I think that’s what makes me alive here. With her, I have family on the other side of the world. That moment in 2018 was crucial.”

After his time at Cataloochee, Hemmer went back to Brazil to finish his undergraduate degree. He then continued working for his father’s company, where he had been employed since 2013. Hemmer also started a business project with his best friends from college and was performing as a guitarist.

Hemmer played soccer and learned music from a young age. In high school, he attended a conservatory of music. He began teaching guitar lessons for extra money and still does in Western North Carolina. Before being accepted into WCU’s MBA program, Hemmer also applied for soccer scholarships in the U.S. Hemmer received one scholarship offer, but decided to attend WCU instead. 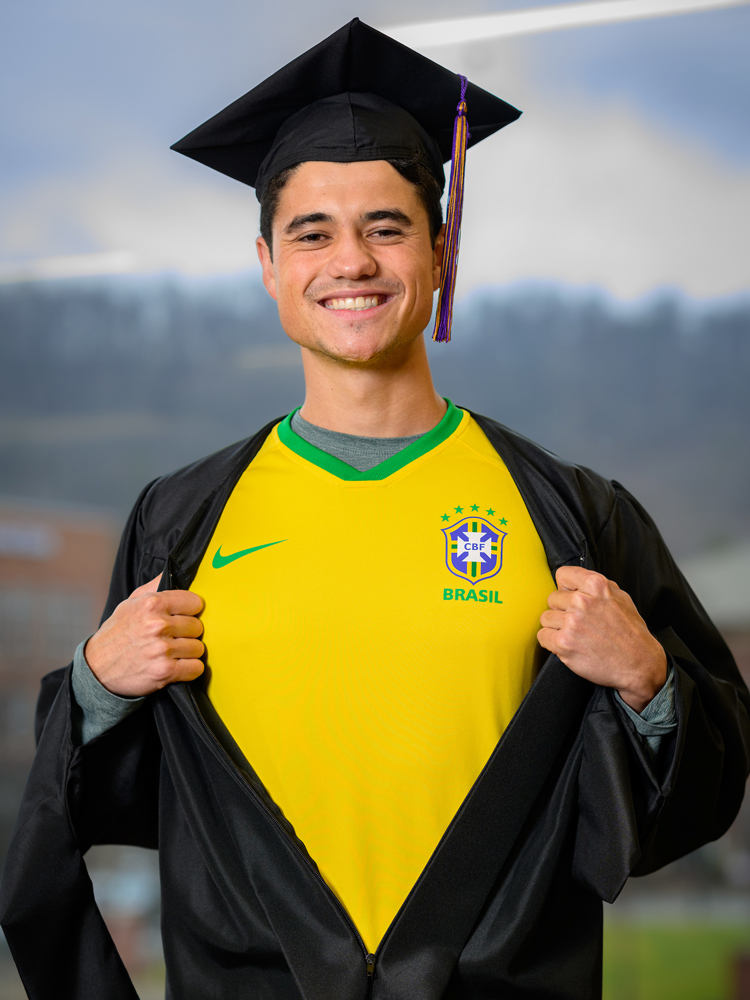 He found another outlet with two indoor soccer leagues in Asheville and Waynesville. “I need soccer. I was missing the benefits of active life. People think that in Brazil, ‘Oh, it’s hot and warm. There’s a lot of soccer fields.' No. Where I live, it’s like a concrete jungle. My whole life I learned how to position and play indoor soccer,” said Hemmer. “It was quite different and now that I found this, I feel like I’m home. I love it.”

After graduation, Hemmer wants to pursue a career in project management. “I always try to set metrics and KPIs for my personal life. I always involve organization and time management. With the MBA program I was exposed to several fields – accounting, economics, legal. I enjoy numbers, procedures, operations,” Hemmer said.

Hemmer is thankful to his professors and Chancellor Kelli Brown for giving him the opportunity to forge his own path.

“I always say ‘Who are you on the other side of the world?’ In my city in Brazil, people know me as Paulo Hemmer’s son. Here I have the opportunity to build my own path.”

Hemmer credits associate professor Steve Ha in particular with encouraging him and providing guidance. Hemmer and Ha recently presented a paper together at the Southern Economic Association Conference. Hemmer also works as Ha’s graduate assistant where they have developed a long-lasting professional and personal friendship. “My home country played his home country of South Korea in the World Cup and he joked, ‘I’m gonna buy you lunch if Korea beats Brazil.’ I said, ‘You better save your money.’”

Hemmer’s transition to the U.S. was not easy, even before he left Brazil. He had to familiarize himself with the testing and application process for the U.S. “It’s quite a challenge. You don’t understand the mechanisms of how the exams here work. I had to study for that as well,” said Hemmer. “The application process is also totally different from Brazil. Basically, everything was completely different. Not in a bad way, just a different way. I always talk with my international professors at Western, ‘Which mechanism is better?’ Sometimes, we have some pros and cons on both.”

Hemmer felt he had to pass his family’s test as well to prove that he was ready for the move. “When I started to work with my dad after coming back to Brazil, I sold my car because I was working for my dad and I was using the work truck. It didn’t make sense for me to have a car; I could use that money to invest,” said Hemmer. “But then I said ‘Oh, wait. Now I don’t have a car.’ I asked for my mom’s car. They said, ‘You can get a bus. You want to go abroad, right?’ I would wake up at 6 a.m., get a bus, go to the terminal and get another bus. In my mind, I was trying to prove to them that I was capable.”

Though Hemmer’s family, friends and people around him thought his move to the U.S. was a little crazy, he now feels validated in his decision. “Ninety percent of the people that I have contact with in Brazil said, ‘I don’t know if that’s a good idea. You’re gonna flip your world upside down.’ I said, ‘Let me try and see how it works.’ Now, I’m getting ready to graduate with my masters,” Hemmers said.

Hemmer was also thankful to find a Brazilian community in WNC. “I feel very lucky. I had professors and classmates telling me, ‘You need to meet this other student from Brazil.’ It kept growing my community. My best friend here is an international student from Brazil.”

Hemmer made the transition, overcame the culture shock, the language barriers, the colder climate, found community and a home away from home. Now he is graduating with his MBA.

“If you put your heart into something, you’ll be able to make it. Even if it seems impossible.”