Nine years after being identified as Western Carolina University’s No. 1 capital improvements project, groundbreaking finally took place for the replacement of the aging steam plant.

WCU Chancellor Kelli R. Brown, WCU Board of Trustees Chairman Brian Kinney, University of North Carolina Board of Governors members Philip Byers and David Powers and others were on hand Friday, March 26, to formerly usher in construction on the long-awaited modern energy efficient production facility.

“I think this is a day that many folks here never believed would actually happen,” Brown said. “The current steam plant behind me was completed in 1924 and has been our No. 1 capital improvement project priority since 2012. Think about that for just a moment, a critical infrastructure for the operation of our campus that is nearly a century old. Talk about bang for the buck.” 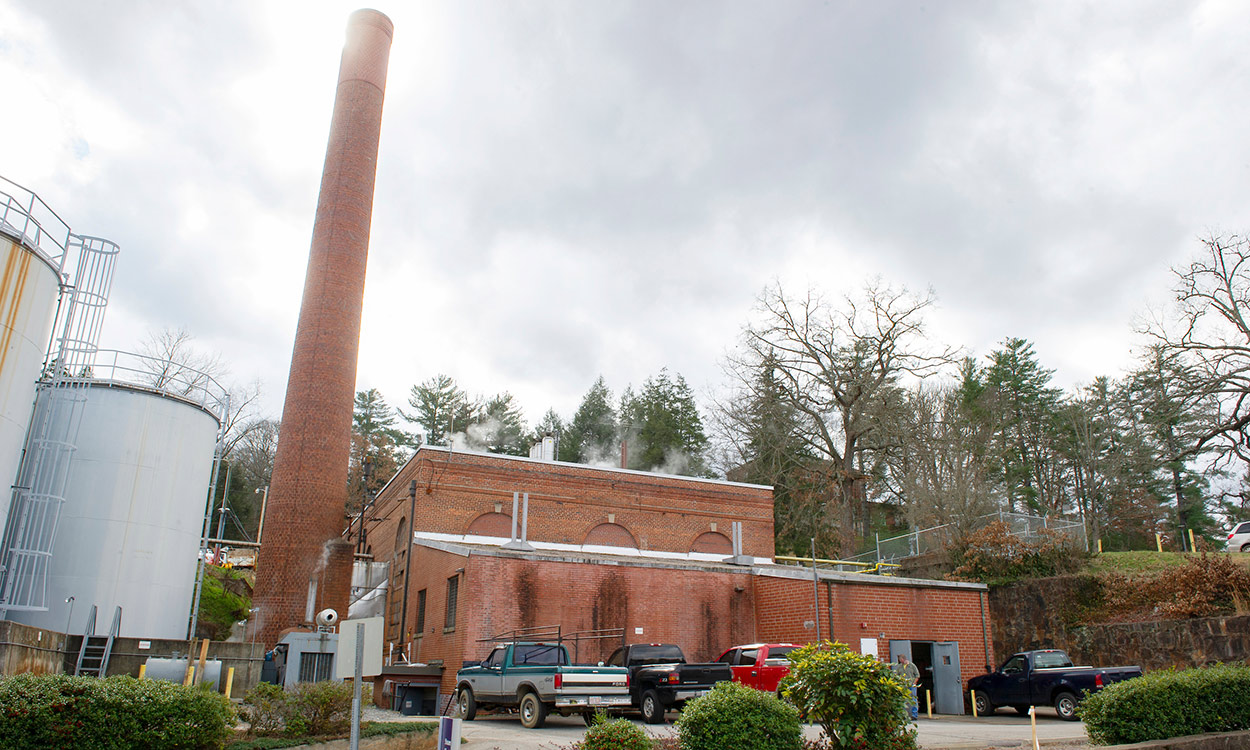 University officials have been concerned for years that WCU is just one harsh winter or one catastrophic mechanical failure away from a complete campus shutdown because of a lack of steam to heat buildings and provide hot water. That nearly occurred in 2016, when the oldest boiler failed, resulting in the need to install costly temporary boilers with a projected lifespan of only 10 years. In addition to providing enhanced reliability of the university’s source for heat and hot water, a replacement energy production facility is expected to result in improved energy efficiency and reliability.

“I distinctly remember the frigid night back in the winter of 2016 when the plant’s oldest permanent boiler failed, almost triggering a catastrophic failure,” Kinney said. “As a Trustee, the last words you ever want to hear considered are ‘campus shutdown.’ But thankfully, the steam plant crew was able to keep the remaining boilers and equipment operational and I join Chancellor Brown in commending them for their commitment to WCU.”

Late Chancellor David O. Belcher, who died in June 2018 after a two-year battle with brain cancer, was a vocal advocate for funding to address what he characterized as “one of the most acute and critical infrastructure needs facing our campus – our antiquated steam plant.” He referred to it as “the steam museum.”

The existing steam plant will be maintained and kept in operation until the new facility is up and running in order to continue providing heat and hot water while the new plant is being built.

The new facility will be a two-story structure, with boilers, piping and a control room located at the top floor and water pumps, treatment equipment and generators on the lower floor. While the new facility will have its own smokestack, the design will keep the current smokestack as a nod to university history.

It will also include a lobby, administrative offices and space to display some of the old plant’s equipment including a steam whistle once used to signal the start and end of a work day, midday lunch break and, with a long continuous blast, special events or warnings.

The new energy production facility, like the current steam plant, will operate using natural gas, with No. 2 fuel oil as a backup source of power. Fuel storage tanks will be relocated to the rear of the new building.