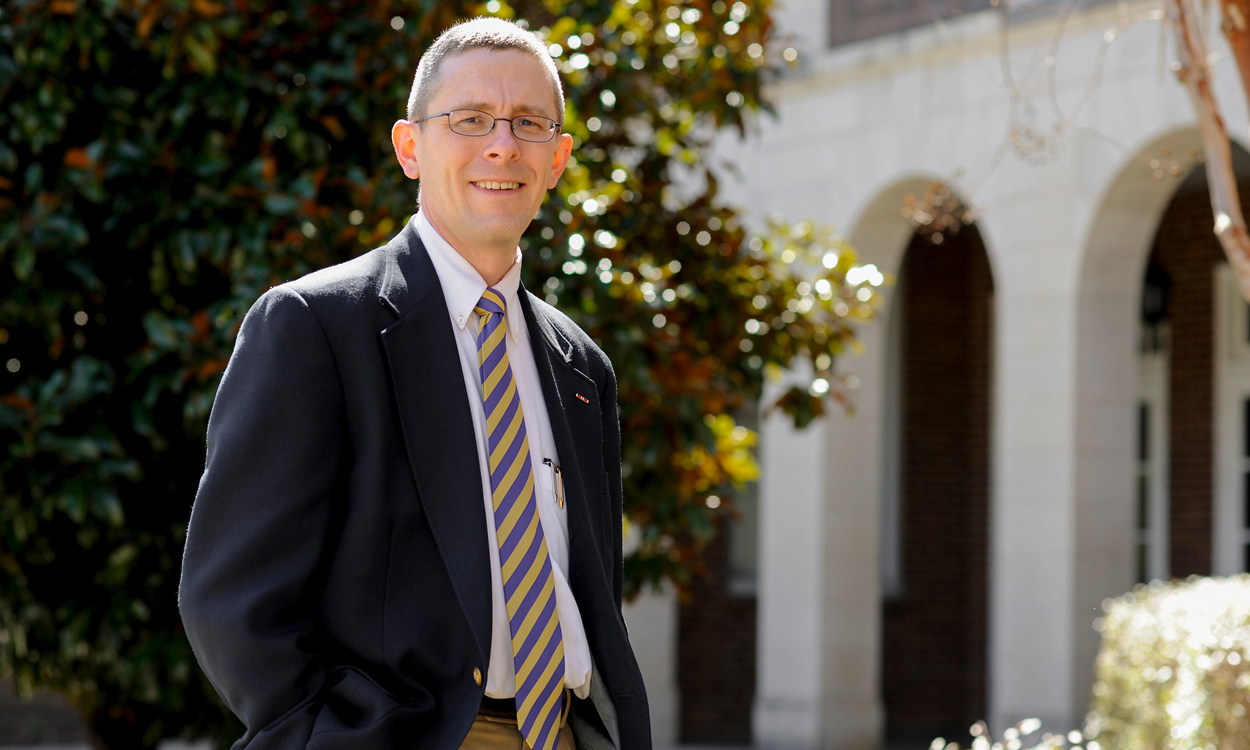 Western Carolina University Chancellor Kelli R. Brown has announced the appointment of Richard D. Starnes as the next provost and vice chancellor for academic affairs at WCU, effective immediately.

Starnes, who has been serving as provost and chief academic officer in an interim capacity since Oct. 1, 2019, was approved for the permanent position by the WCU Board of Trustees during a special called meeting Wednesday, Oct. 14.

“Dr. Starnes quickly distinguished himself as the top contender in an extremely deep pool of candidates for this important position at this critical time,” Brown said. “As an alumnus who holds bachelor’s and master’s degrees from WCU, as a faculty member, and as former dean of the College of Arts and Sciences, he has incredible institutional knowledge. Born and raised in Western North Carolina, he is intimate with the mountain region this university was founded to serve. And, as an infantry officer in the U.S. Army and Army Reserves for 25 years, he possesses a calmness under fire, which has helped this institution immensely as we navigate the complexities of operating during the global COVID-19 pandemic.”

The selection of Starnes concludes a national search conducted by a 13-member campus committee chaired by Dale Carpenter, professor of special education and former dean of the College of Education and Allied Professions, and assisted by the Parker Executive Search firm. The committee and members of the campus community who met the candidates were both “comforted by and impressed with” Starnes’ experience at WCU and within the University of North Carolina System, Carpenter said.

“As a native of the region and a WCU alumnus, Dr. Starnes, a historian by training, knows what got us here, but he also is laser-focused on the future of his beloved alma mater and the region. Anyone who knows Richard Starnes knows that one of his favorite phrases is, ‘We owe it to our students to live up to our promises to them.’  Those who know Dr. Starnes also know that his experience as an Army officer in Iraq has contributed to his steady hand in the face of adversity. Dr. Starnes is the right person to help Chancellor Brown lead WCU in the months and years ahead.”

During his time as interim provost, Starnes served on a UNC System task force that helped guide the system’s response to the COVID-19 crisis and led the WCU Division of Academic Affairs in the development of changes to operating procedures. He worked with the chancellor and Faculty Senate to initiate recommendations of a task force on faculty salaries, including upgrading all lecturers to the level of instructor, and he hired a new dean for the College of Health and Human Sciences and executive director of educational outreach.

Dean of the College of Arts and Sciences since July 2012, he played a leading role in securing funding for the Apodaca Science Building, a $110 million science facility currently under construction that was made by possible through the 2016 Connect NC Bond, and he helped secure the $4.2 million Curtis and Enid Meltzer Endowed Scholarship Fund, which provides support for students from all departments in the College of Arts and Sciences.

Before being named dean of the College of Arts and Sciences (initially in an interim capacity), he served for five years as head of the Department of History. He joined the WCU faculty in 2000 and previously served as an assistant professor of history at Mars Hill College.

He earned his bachelor’s and master’s degrees in history at WCU in 1992 and 1994, respectively, before going on for his doctorate in history at Auburn University, received in 1999.

“Guided by strong commitments to our students and to the region we call home – commitments that have come to be referred to as ‘the Western Way’ – Western Carolina University is a very special place, indeed,” Starnes said. "I benefited immeasurably from this Western Way as a student, and I am humbled and honored to help lead WCU toward an even brighter future as provost and vice chancellor for academic affairs.”

Although the search for a successor to Alison Morrison-Shetlar, who departed the role of provost in October 2019 and who became president of the University of Lynchburg in Virginia on July 1 of this year, initially got underway in February, it was suspended indefinitely in March because of travel difficulties associated with COVID-19.

“If anyone needed more confirmation that Western Carolina University has a stellar national reputation, perhaps knowing that the provost search attracted more than 170 applications from across the country, including some well-qualified international candidates, might help,” said Carpenter. “The search committee and the firm assisting in the search were surprised by the quantity and quality of applicants, making this search very competitive, which was unexpected in the midst of a worldwide pandemic.”

In addition to Carpenter, members of the search committee were:

* Enrique Gomez, 2019-2020 chair of the Faculty Senate and associate professor of physics and astronomy, College of Arts and Sciences.

* Chesney Reich, director of the Writing and Learning Commons, Division of Academic Affairs.

Mayah Baird, administrative support associate in the Office of the Chancellor, provided assistance to the committee.