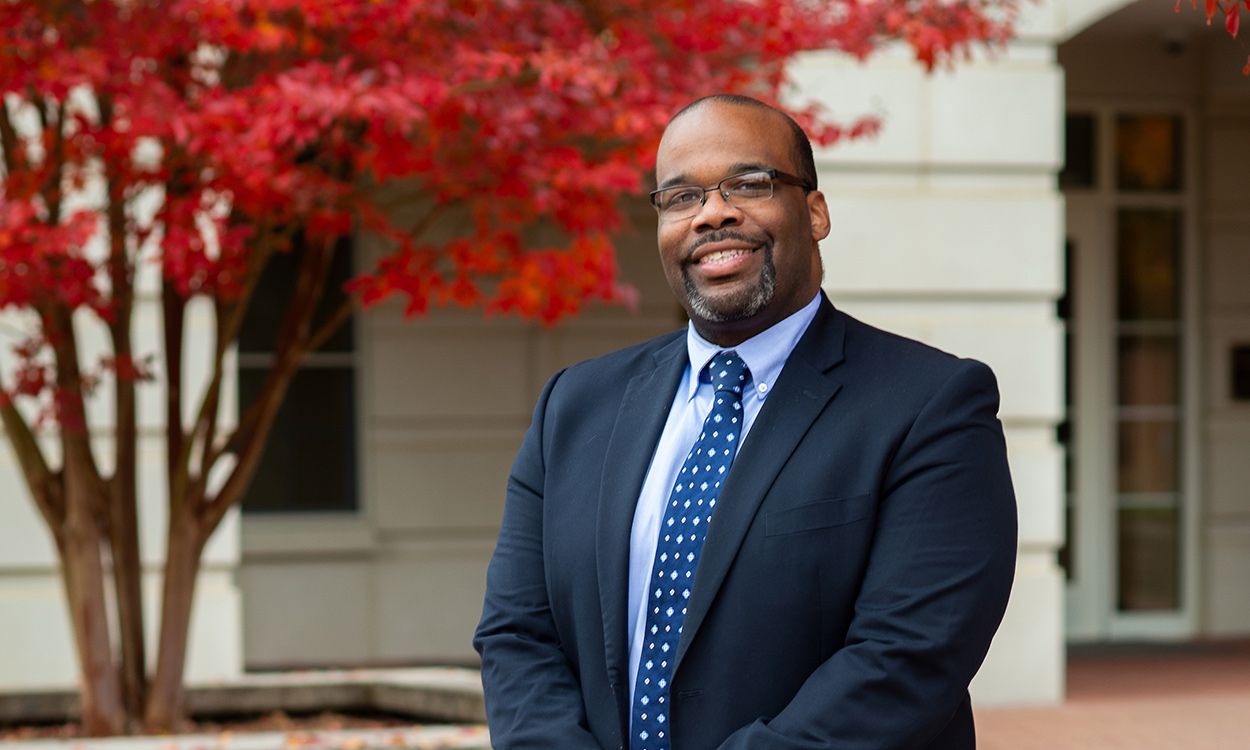 After serving as Western Carolina University’s interim associate vice chancellor and dean of students since June 2019, BaShaun H.L. Smith had the interim tag removed May 1, allowing him to take on a position he said he has spent his entire career preparing for.

“I was excited about being able to continue working with staff, faculty and students,” Smith said. “I think that we have a lot of unfinished work. We have a lot of unfinished things to do and collectively, I think that we can build upon that. I’m definitely blessed to be in this role, but the reality behind that is if I didn’t do a decent job building relationships, I would never have the opportunity. Because of students, staff and faculty, I’m in this role permanently.”

“He has demonstrated expertise in the areas of student programming, student conduct, residence hall supervision, working with underrepresented students, fraternity and sorority life, and he has experience with Title IX investigations,” Miller said. “Dr. Smith will be a passionate student advocate, eager to meet and assist students. Faculty and staff colleagues will appreciate Dr. Smith as a valued partner when working on student matters.”

Smith credits his experiences in residence life for preparing him for the challenges as dean of students. Because of the unpredictability in residence life, Smith learned the importance of being flexible and adaptable.

In the last year, he has seen that carry over into his current position.

“I think it really helped me to understand that at the end of the day, the students are our bread and butter,” Smith said. “They are what helps the institution function. They are what helps the institution move forward. And we can’t do these things without them. It really helped put that into perspective. It helped me be flexible and adaptable because you have to be, like getting a call at 2 or 3 o’clock in the morning because there’s a fire in the building. You’ve got to wake up and do what you’ve got to do in order to be successful.”

Smith has spent the last couple of months helping students navigate the challenges that COVID-19 have presented to higher education. More recently, nationwide protests and riots have taken place regarding the police killing of George Floyd, an African American male in Minnesota.

Smith anticipates those tensions to remain present when students are scheduled to return to Cullowhee in August. He is prepared to have the necessary conversations with all students.

“Being able to have those conversations as far as we 100 percent do not have to agree with each other, whether its black lives or blue lives, but we have to have a common ground of mutual respect,” Smith said. “That’s the most difficult part because you have some folks saying, ‘Black Lives Matter,’ and some folks saying, ‘all lives matter.’

“Trying to have those two polar opposites try and find that common ground of mutual respect is going to be difficult because those topics are heated. We’re going to need a collective effort as far as with our staff and with our faculty all having the same message as to this is how we work with our students who are frustrated with what’s going on in our country, or maybe even frustrated with what happened to them at the Sylva Walmart. Just being able to support them and having those conversations early on because I have no doubt that it’s going to pick up soon.”

A native of Cleveland, Smith completed his undergraduate work in history with a minor in political science at Bowling Green State University in 2007. He earned his master’s degree from the University of Dayton in college student personnel in 2012. In May, Smith, 35, completed his doctorate at WCU in educational leadership.

Before coming to WCU, Smith worked in residence life at Dayton (2010-12) and Virginia Commonwealth (2012-13) He was the assistant director of residential education at Denison University in Ohio from 2013-16.

His goal is to become a president or chancellor at a predominately white institution by the age of 50.

“Representation is extremely important,” he said. “Whether we want to admit it or not, students are going to see certain people that look like them and they’re going to naturally feel more comfortable. Looking at colleges’ and universities’ landscapes, there’s not that many people of color in president or chancellor positions. I want to be at a PWI where you can have a little bit more influence on race relations, or how students are feeling. You have a little bit more say and impact. But at a historically black college or university, you’re kind of preaching to the choir. Just having representation for students, I think, is really important.”

In the meantime, Smith said he plans to continue building relationship and keeping a pulse on the students’ voice.

“I think we can get lost in our everyday administration, but if we’re truly not serving our students and paying attention to what our students are struggling with and what they deem important, I think we can easily get lost and lose our focus,” Smith said. “It’s a balancing act, but you need to never forget that they are our bread and butter. We need to listen to them and be willing to partner with them. If you’re not having those conversations with them, they’re just going to think you’re ignoring them and that’s not going to work out well for you.”