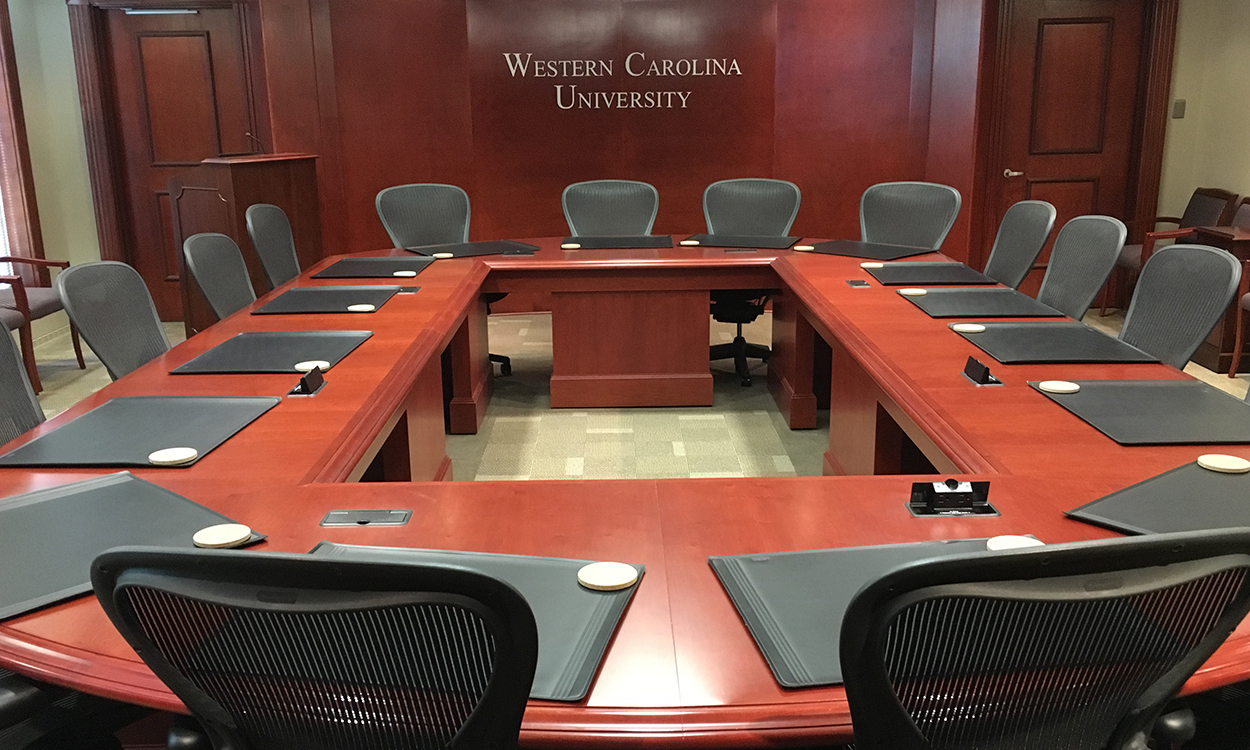 The Western Carolina University Board of Trustees has added its collective voice to a growing chorus across the University of North Carolina System urging state leaders to find a way to end an ongoing budget stalemate.

The board, in a special conference call meeting Tuesday, Jan. 21, approved a resolution in support of a rapid conclusion to a months-long impasse between the General Assembly and Gov. Roy Cooper that has tied up salary increases for faculty and staff, delayed funding for a replacement to WCU’s aging steam plant and forced university officials to consider slowing enrollment growth.

The action follows approval of a similar resolution by the UNC Board of Governors on Friday, Jan. 17, encouraging the swift passage of budget legislation and calling on the boards of trustees across the UNC System to endorse concurring resolutions.

The resolution approved by the WCU board calls for elected state officials to enact the proposed budget within House Bill 966 along with provisions originally included in Senate Bill 354 that would provide raises totaling approximately 4 percent over the next two years to university faculty and staff. The original budget proposal included UNC System faculty and staff pay raises totaling only 1 percent over the next two years.

Trustees expressed concern that the budget stalemate also may have an impact on future student enrollment at WCU and two sister UNC institutions – Elizabeth City State and UNC Pembroke – that are part of the NC Promise program which lowers the cost of in-state tuition to $500 per semester. The General Assembly reimburses the three universities for the difference in the tuition rate charged and the actual cost of providing education.

WCU is currently operating without $4.3 million in additional funding for NC Promise buy-down needed to cover higher-than-expected enrollment in 2018 and 2019. In addition, since July 1, 2018, (the effective date of the current budget), WCU has added 1,133 new students with no new enrollment growth funding.

The budget plan approved in May of 2018 also included a $16.5 million allocation as the first of two planned installments to fund replacement of WCU’s decades-old steam plant, which supplies heat and hot water to campus. Although the university has been able to proceed with some planning and design for the new steam plant, the delay in receiving the second $16.5 million will postpone construction.

The biennial budget for 2019-21 was scheduled to take effect July 1, 2019, but was vetoed by Cooper. The N.C. House of Representatives successfully overrode Cooper’s veto on Sept. 11, but the state Senate convened on Tuesday, Jan. 14, without taking action on the budget. The General Assembly is not scheduled to convene again until April 28.

The Legislature did approve – and Cooper did sign into law – a series of “mini-budgets” resulting in budgets for most state agencies and salary increases for most state employees, but the UNC System and its constituent institutions are continuing to operate on the previous biennium’s spending plan.

Whereas, Senate Bill 354 provided approximately 4 percent raises over the next two years to university faculty and staff, who are critical to our mission to serve the region; and

Whereas, House Bill 966 also provides critical funding for the NC Promise Tuition Buy-Down Program, which reduces the cost of tuition to $500 per semester tuition at WCU; and

Whereas, the current proposed budget, House Bill 966, includes funding for several critical and time-sensitive university investments, including the second installment of funding to replace the century-old steam plant for Western Carolina University; and

Whereas, the absence of an enacted state budget for FY 19-21 will require that WCU slow the rate of enrollment growth, which will hurt students, including rural and low-income students from Western North Carolina, and will impact growth for the next several years;

Whereas, the absence of an enacted state budget for FY 19-21 significantly hurts WCU, faculty, students and the communities we serve, and threatens the ability of WCU to enhance the economic vitality of Western North Carolina;

Now, therefore, be it resolved, that the Board of Trustees of Western Carolina University strongly and urgently encourages all elected leaders who support and value the world-class higher educational systems in North Carolina to move swiftly to enact House Bill 966 and approve with the provisions originally included in Senate Bill 354.