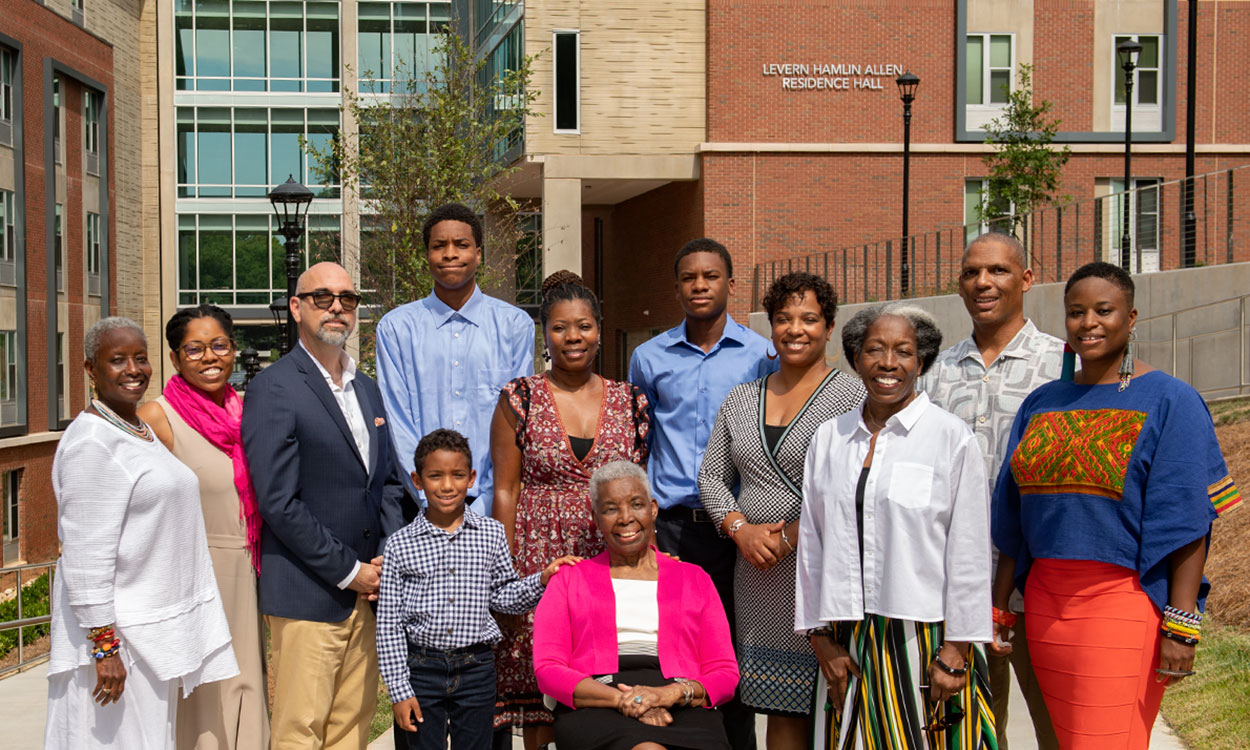 Nearly 300 members of the Western Carolina University community came together Thursday, Sept. 5, to dedicate the campus’s newest residence hall in honor of Levern Hamlin Allen, the institution’s first African-American student and a woman characterized by WCU Chancellor Kelli R. Brown as “a quiet pioneer of integration.”

The WCU Board of Trustees unanimously decided last September to name the 614-bed residence hall, which opened this fall, after Allen in recognition of her decision to enroll in summer courses in 1957 at what was then Western Carolina College. In addition to being the first African-American student to enroll at WCU, she also was among the first to be admitted to any of North Carolina’s all-white state institutions of higher education.

“In doing so, you demonstrated a sense of bravery that I don’t believe many of us can comprehend – being the only student of color at a school in the rural mountains of North Carolina, hundreds of miles away from home,” Brown said to Allen at the dedication ceremony. “And, in doing so, you became a quiet pioneer of integration, helping blaze the trail for thousands of African-American students who would one day follow in your footsteps and enroll at Western Carolina.”

Allen often has downplayed the historic nature of her decision to enroll, stating that she was not making a statement, nor was she part of an organized effort on behalf of a civil rights group. “I needed nine hours, so I went,” she said. 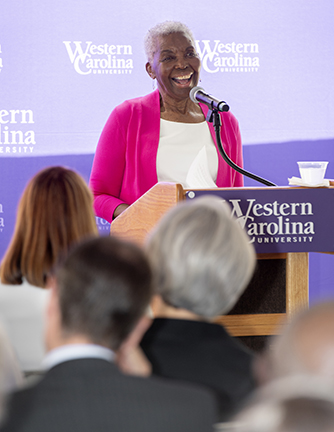 Allen speaks to the audience at the dedication ceremony.

That fact doesn’t lessen the impact of her choice to enroll, Brown said. “She may be humble about her decision and her actions, but I can tell you that, in life, it’s often the power of simply showing up that can make all the difference in the world,” she said. “The story of Levern Hamlin Allen is a lesson in understanding that true heroism is not always flashy. Most of the time, true bravery is the humble act of presenting yourself at the right place and in the right moment of time. That is the power of Levern Hamlin Allen’s story at Western Carolina University.”

Michael Naylor, president of the WCU African-American Alumni Society and a member of the WCU Alumni Association Board of Directors, was a graduate student at WCU pursuing his master’s degree in business administration when he and other members of a group called the Ebony Club began planning for the university’s inaugural African-American alumni reunion in 1987. It was that group’s outreach to Allen that helped revive her relationship with the university, later leading to two terms as a member of the Board of Trustees. She also served on the search committee that recommended John W. Bardo as chancellor in 1995. Eleven years later, Bardo presented her with an honorary doctorate of humane letters on behalf of WCU.

“Today, we honor a woman who, in the summer of 1957, during a time of incredible racial turmoil in this nation and especially in the South, took the brave step of enrolling at a small college in the mountains of rural Western North Carolina, hundreds of miles from her home and her family, where she would be the only student of color,” Naylor said at the dedication.

“Here we are this morning, 62 years after she first set foot on this campus in Cullowhee, to officially dedicate this new residence hall as Levern Hamlin Allen Hall, a place where a diverse group of more than 600 students will pursue their dreams, just as Dr. Allen did in the summer of 1957,” he said.

Representing WCU’s Board of Trustees, board Chairman Bryant Kinney said that Allen’s story resonates with the mission of Western Carolina University – an institution built around meeting the educational needs of the people of the region and the state by creating what WCU’s mission statement refers to as “learning opportunities.”

“We are proud to be among the select institutions of distinction that provided you a learning opportunity and that you chose to meet your needs. But Dr. Allen’s story was not one simply about having her educational needs met. As a board, we recognized the tremendous importance of her choice at a time when choices were not always available to everyone,” Kinney said.

“But, just like pioneers who grew this nation, Dr. Allen had the courage and commitment to step out and ‘just go.’ For her leadership, others have followed, and this building will house a diverse student population that was only a dream back in 1957,” he said.

In her remarks, Allen described an early encounter with Danny Hirt, the young son of Lillian Hirt, the institution’s director of publicity who helped Allen quietly assimilate into the campus community in that summer of 1957. 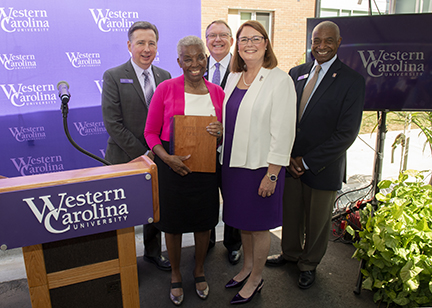 Allen (second from left) receives a reproduction of her scrapbook that documented her time at WCU, which she previously donated to Hunter Library Special Collections. With her are (from left) Sam Miller, vice chancellor for student affairs; Bryant Kinney, chair of the Board of Trustees; Chancellor Kelli R. Brown; and Michael Naylor, president of the WCU African-American Alumni Society.

“Danny asked me why my skin was so dark,” Allen said. “While I was struggling to form a professional teacher answer for a 7-year-old, his mother said, ‘Because she is from a different race.’ The matter was settled. Danny went back to playing and Mrs. Hirt and I continued our conversation. I have told that story often because it speaks to the innocence of a child as well as to his environment. The milieu of Western Carolina College in the summer of 1957 was one of acceptance.”

Allen said she received a letter a couple of years ago from Danny Hirt, who passed away in January of this year. “In it, he said, ‘Obviously, this was only a question of innocence asked by a youngster who had a natural curiosity about the things around him. Mom made sure that my brother and I understood that while people may look different, we are all children of God and should be respected and embraced,’” she said.

Sam Miller, WCU vice chancellor for student affairs, expressed his appreciation to “the small army of planners, designers, contractors, trades specialists, inspectors, team members from WCU departments and many other individuals” who worked on the planning and construction of Allen Hall. Construction on the $48 million, 165,026-square-foot project began in spring 2018.

To close the dedication ceremony, university officials presented Allen with a reproduction of a scrapbook that documented her time at WCU, which she had previously donated to Hunter Library Special Collections.

Other activities related to the dedication included tours of the residence hall for members of Allen’s family, an African-American Alumni Society reception, and a breakfast conversation involving Allen and student leaders titled “Breaking Barriers and Breaking Bread.” 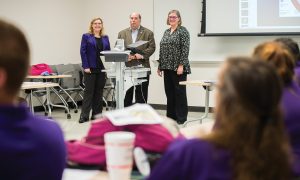