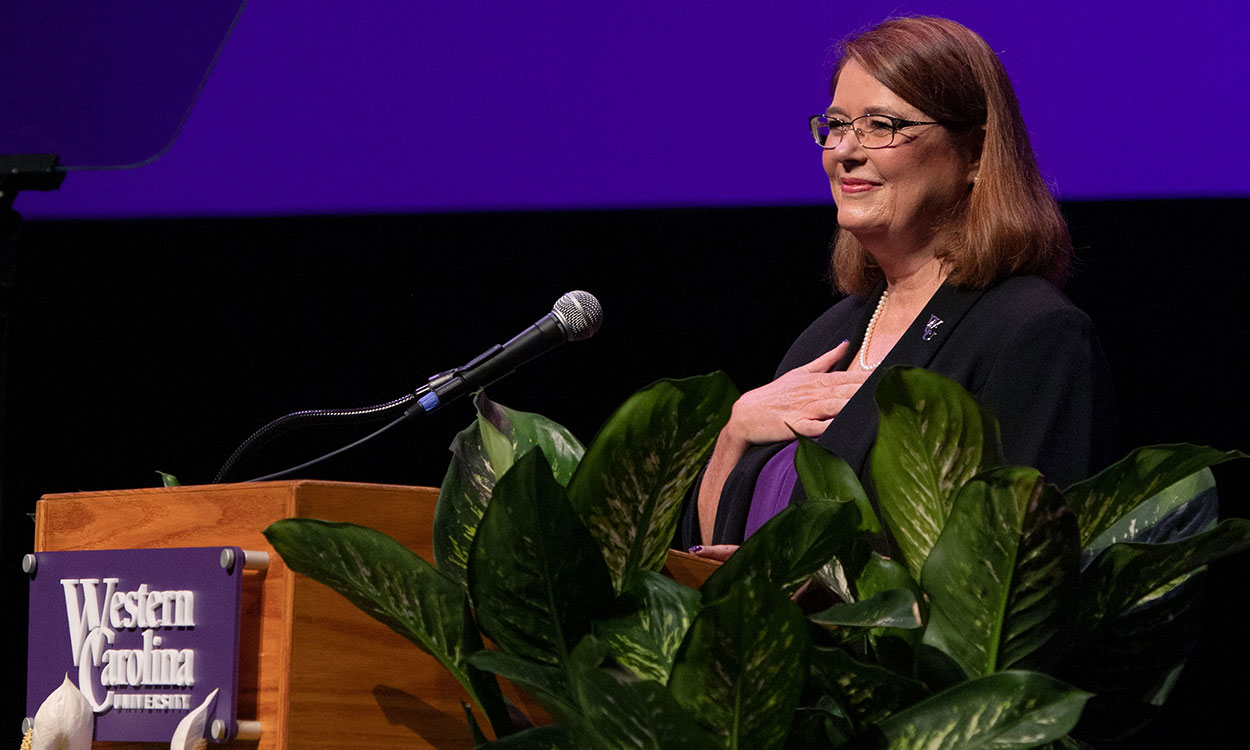 Chancellor Kelli R. Brown reacts to the standing ovation she received after being introduced to faculty and staff at WCU’s annual Opening Assembly.

In her inaugural Opening Assembly address, Western Carolina University Chancellor Kelli R. Brown outlined three themes to guide WCU during the year ahead – a continued emphasis on the quality and excellence of the overall university experience, an expansion of diversity and inclusiveness efforts, and a sharpened focus on regional economic development.

Brown, who officially took the office of chancellor July 1, also suggested to the crowd of nearly 800 faculty, staff and community members in attendance that WCU’s roots as an institution founded to bring educational opportunities to the southwestern corner of North Carolina will serve the university well in the changing landscape of higher education.

”I believe that all types of institutions of higher education are important – from the community colleges and technical schools that provide their graduates with needed skills in the trades and in health care careers to the big R-1s and doctoral universities. But, I think regional comprehensive universities, like WCU, are the most important because of their role in expanding the reach of higher education to include many of our under-represented populations of learners,” she said at the annual back-to-school kickoff event Wednesday, Aug. 14.

“Western Carolina University and other institutions like us are where first-generation students go to achieve a better quality of life than their parents. We’re the place where students show up on our doorstep, looking for answers to questions that they don’t even know they should be asking,” she said. “We’re the place for those who are not sure how in the world they are going to be able to pay for tuition and fees, or who don’t know how they are going to be able to juggle schoolwork, a job and a family.”

With public opinion about institutions of higher education on the decline because of doubts about the return on investment in the face of increasing costs, it is important that regional comprehensive institutions focus on the programs and initiatives that are within their respective missions, Brown said.

“Western has seen enrollment growth during the past decade, which is directly attributed to the high-quality academic programs and the excellent student experiences offered at Western. We must not diverge from that path of quality and excellence. And, as the university continues to grow strategically, we must not lose sight of what makes WCU so very special,” she said.

“We must continue to provide the small class sizes and the close relationships between our faculty and students that have been a hallmark of Western for decades.    And, we must make sure we do not lose our sense of place and our sense of purpose. The universities that succeed are the ones that know who they are and, perhaps more importantly, know who they are not,” she said.

Brown said she believes her three early priorities for 2019-20 are well within the institution’s mission and will help ensure that the public has confidence in universities like WCU, even as the number of four-year brick-and-mortar institutions nationally declines.

“Fundamentally, I am confident that there will always be a need for universities like Western Carolina University, those public regional comprehensive institutions that serve the underserved – the rural residents, the first-generation students, the nontraditional students, the students from disadvantaged socioeconomic backgrounds, the young people who work hard to earn a place here for their own betterment and the betterment of their families,” she said.

That is why making sure WCU maintains its institutional emphasis on quality and excellence, remains true to its mission, and acts as a good steward of public funding constitute a top priority for the year, she said.

The university also must not just continue its work in diversity and inclusive excellence, but also ramp up its efforts in that area, Brown said. Toward that end, WCU will dedicate Levern Hamlin Allen Hall on Sept. 5 in honor of the university’s first African-American student and will seek to expand its longstanding partnership with the Eastern Band of Cherokee Indians, she said.

“The nation’s racial and ethnic profile is changing, and we must embrace that change,” she said. “Diversity of thought and experience is broader than ever, yet more polarized than ever. Western must hold fast to the notion that universities are a place where students can explore different modes of thinking, be provoked out of their comfort zones, and apply a critical lens to their own beliefs and viewpoints.” 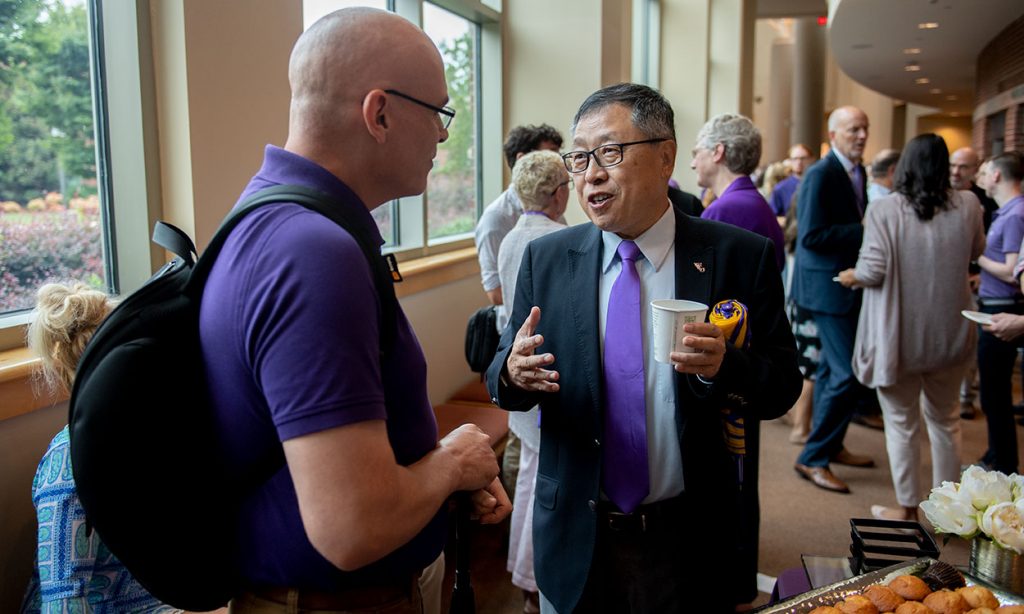 Members of the WCU faculty and staff mingle during the reception at Opening Assembly.

“Yes, we provide higher education for the people of the region – students become graduates, and many graduates remain here in the region and contribute to their communities and the local economy. But, we also contribute directly to the economy of this region. Our faculty and staff, whether they come from the local area or move here from other places, contribute to the local and regional economy,” she said.

Brown reminded the crowd that 40 percent of the nation’s college graduates in 2018 earned their degrees at institutions like WCU, and that WCU retains and graduates first-generation students at a rate that exceeds the national norm.

“This university is getting it done, and I am ready to carry that message to the living rooms of prospective students, to the boardrooms of prospective employers and to the halls of our state legislature,” Brown said. “Please join me as we begin a new era of excellence for Western Carolina University, an era in which we honor the traditions of our past and embrace the innovations of today that will lead us into the future.”

Link to the chancellor's remarks online 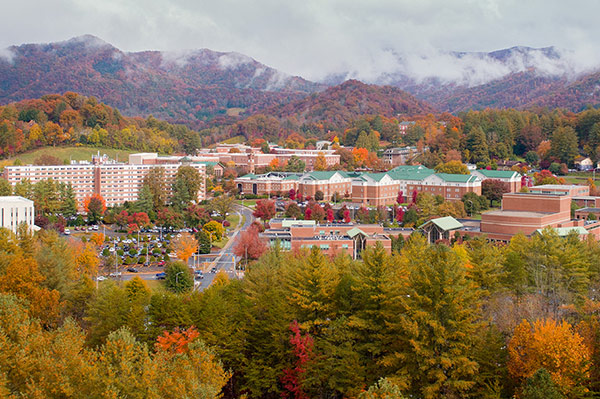