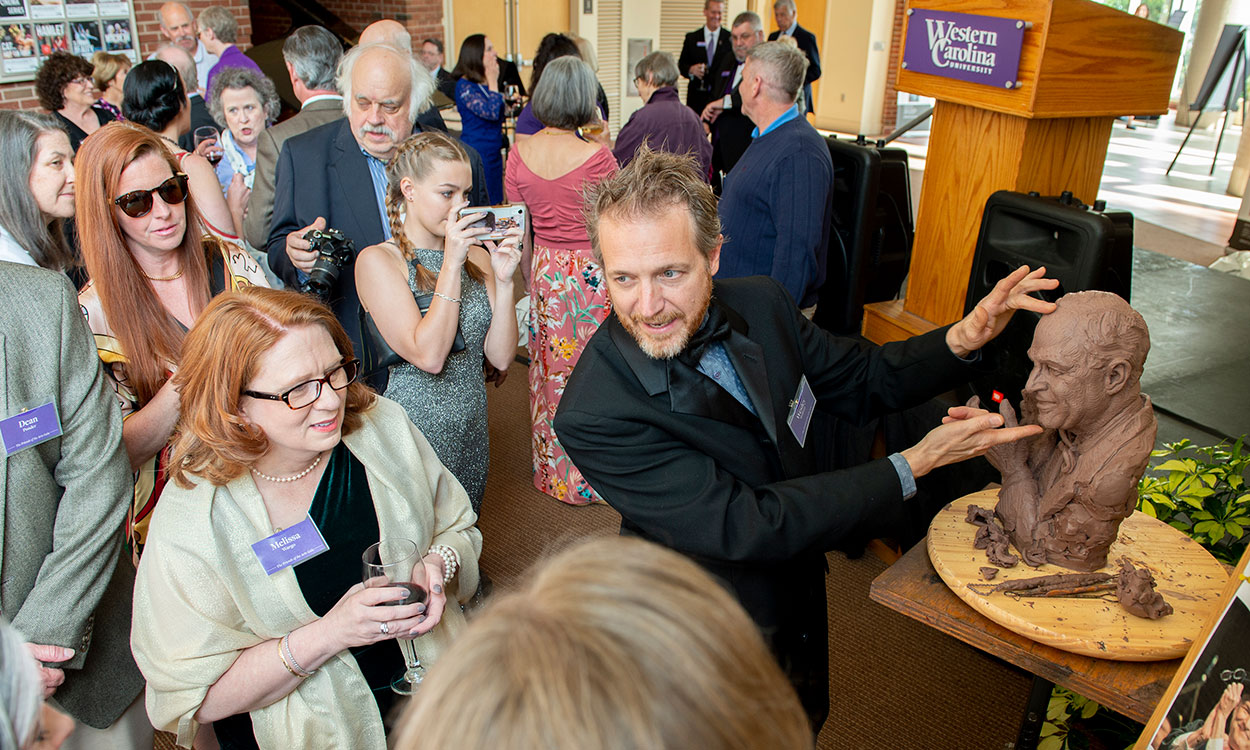 With a flourish of trumpets, the clinking of glasses raised in a toast and the soothing tones of piano, flute and clarinet, Western Carolina University officially bestowed the name of late Chancellor David O. Belcher onto the academic unit that is home to its programs in the fine and performing arts.

The WCU Board of Trustees last July unanimously approved the naming of the David Orr Belcher College of Fine and Performing Arts in honor of the man who served as WCU chancellor from 2011 until his death in June 2018 after battling brain cancer for more than two years.

“I truly believe that Chancellor Belcher would be well-pleased by this recognition,” WCU Interim Chancellor Alison Morrison-Shetlar said at the dedication ceremony Saturday, April 27. “Naming this college in his honor is an appropriate coda to his career as a musician and an educator, and to his advocacy on behalf of all the arts – music, theatre, art, design, dance, and film and television production.”

During a reception immediately prior to the ceremony, members of Belcher’s family gathered with Cashiers-based artist Wesley Wofford to offer input on his work-in-progress clay model of a bust of Belcher that, when completed, will be on permanent display within the college.

In her remarks during the dedication, Belcher’s wife, Susan Brummell Belcher, described Wofford’s efforts to find not just her late husband’s visage, but also “his quintessential spirit.” That task was made even more difficult, she said, because “there were so many Davids – the chancellor David, the happy David, the listening David, the ‘let’s-get-down-to-business’ David, the laughing David, the crazed ‘go Cats’ David.” In his sculpture, Wofford is capturing what she called “the ‘supportive, deeply proud of his university’ David."

"Clothing David in the tuxedo of the performing artist, Wesley is capturing him mid-applause, as David both acknowledges and shares another’s moment of achievement, quietly pleased with their success and the role his beloved institution played in the attainment of that success,” she said. 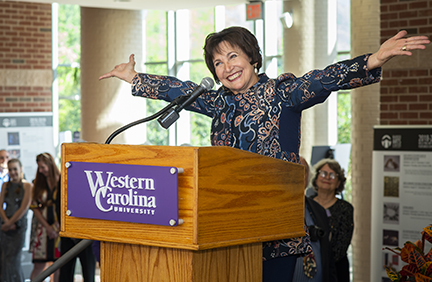 “As an administrator, David believed in the transformative power of education,” she said. “As an artist, David knew personally and through experience that the study, discipline and mastery of art prepares one not only to be an artist, but to be anything – even a chancellor.”

Patricia Kaemmerling, chair of WCU’s Board of Trustees, compared the former chancellor to the conductor of an orchestra – “a magnificent maestro, if you will” – working with numerous individual players toward a common goal.

“It takes a truly skilled leader to bring such a wide array of individual talents together so that everyone is working toward the greater good of the organization,” Kaemmerling said. “That’s what David Belcher did. He was our maestro. Under his direction – and always with the support of his wife, Susan – Western Carolina University has made beautiful music.”

George Brown, dean of the Belcher College of Fine and Performing Arts, opened the ceremony with a toast: “To David Orr Belcher and to all those he inspired to be guiding lights, believing in the transformational power of education to change our students’ lives, our region and the world for the better.”

Brown provided bookends to the dedication, closing the event by addressing Susan Belcher: “The faculty and staff of the David Orr Belcher College of Fine and Performing Arts are proud to bear his name and will honor his legacy of inspiring and educating our exceptional students here at Western Carolina University, both as artists and citizens of the world.”

Founded in 2007, the College of Fine and Performing Arts serves as the cultural heart and creative showcase of WCU. The mission of the college is to “inspire, educate and train the next generation of artists, scholars and teachers in the intellectual foundations and creative processes of the fine and performing arts while fostering excellence and artistic curiosity across Western North Carolina and beyond.”

The college consists of the School of Art and Design, School of Music, School of Stage and Screen, and John W. Bardo Fine and Performing Arts Center, which contains a 1,000-seat performance hall and WCU’s Fine Arts Museum. The School of Music is where Belcher held his academic credentials, tenured at the rank of full professor.

Students from any program in the College of Fine and Performing Arts are eligible for the Susan Brummell Belcher College of Fine and Performing Arts Endowed Scholarship established by Belcher in honor of his wife in 2017, while students in the School of Music are eligible for the Chancellor’s Music Scholarship supported by Belcher.

The college has 60 faculty artists and scholars who work alongside 13 professional staff members to serve more than 700 students majoring in the college’s programs. It serves thousands of other students across campus and the region through educational opportunities and hundreds of music concerts, theatre and dance performances, student showcases and recitals, film screenings, exhibitions of visual arts, lectures, guest artists and pep band performances.

The dedication ceremony was followed by the WCU Friends of the Arts Gala, an annual fundraising activity to benefit scholarships and programming for students in the Belcher College of Fine and Performing Arts. 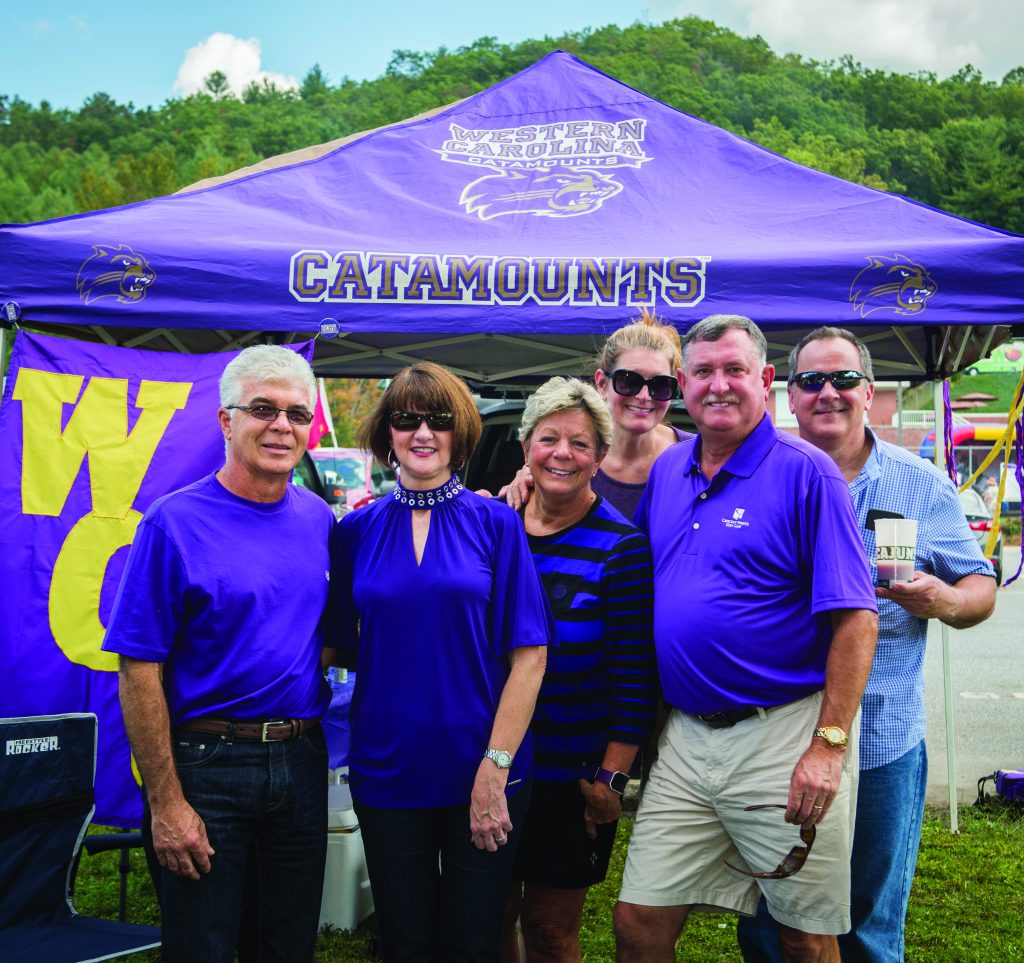