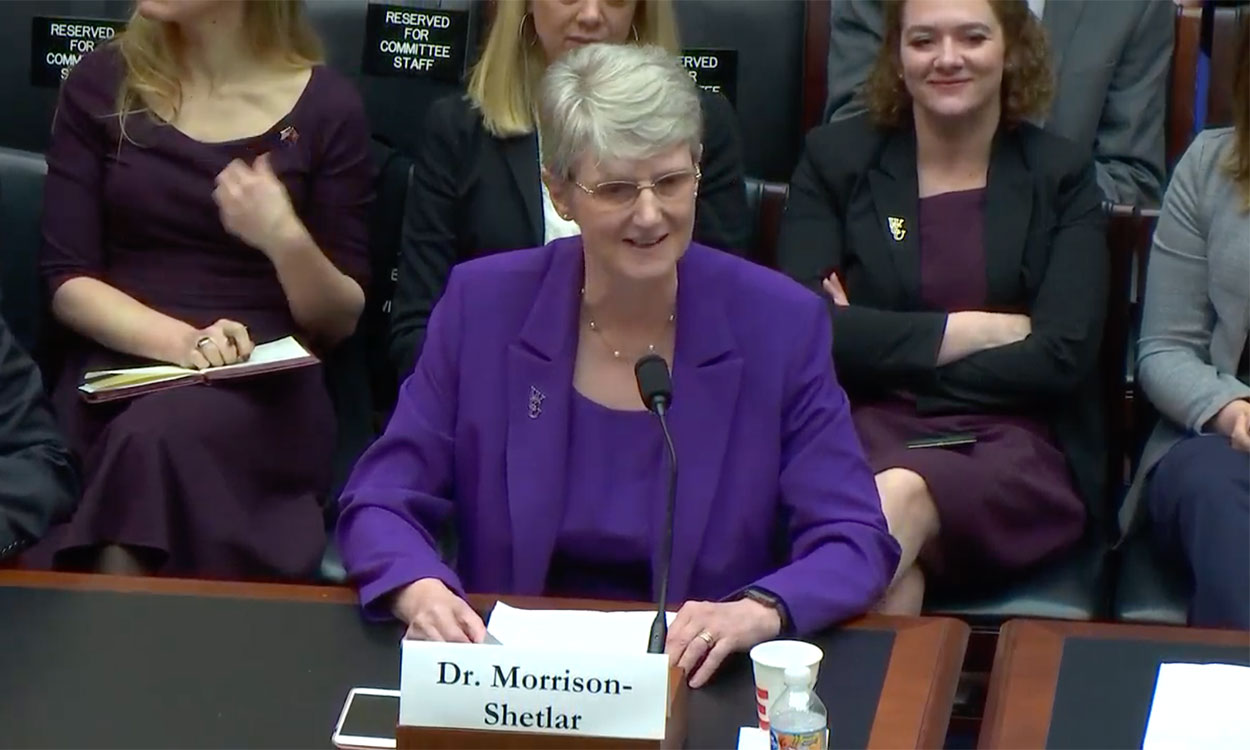 Western Carolina University Interim Chancellor Alison Morrison-Shetlar discusses the impact of the NC Promise tuition plan during a hearing Wednesday, March 13, of the U.S. House of Representatives Committee on Education and Labor.

Western Carolina University Interim Chancellor Alison Morrison-Shetlar testified Wednesday, March 13, before the U.S. House of Representatives Committee on Education and Labor, describing the NC Promise tuition program as a “game-changer” that is making a college education more affordable and more accessible to a larger number of students.

Morrison-Shetlar was among a five-member panel of witnesses invited to testify at the committee’s hearing on “The Cost of College: Student-Centered Reforms to Bring Higher Education Within Reach.”

Through NC Promise, an in-state student who graduates in four years would save approximately $12,000, Morrison-Shetlar told the committee.

“The goals for NC Promise are clear: increase access to higher education, improve affordability, reduce student debt and continue to grow North Carolina’s economy,” she said. “I hear from my students every day that this program is a game-changer. It is opening doors. It is changing the trajectory of their lives and setting them up for success beyond their expectations.”

Total undergraduate enrollment was up at all three NC Promise institutions for the 2018 fall semester – 6.6 percent at WCU, 14 percent at UNC Pembroke and 19 percent at ECSU. At WCU, the number of first-time, full-time freshmen increased by 10.5 percent last fall, while the number of transfer students jumped by 40.5 percent.

Morrison-Shetlar shared the results of a survey of members of WCU’s fall 2018 entering class in which nearly one-third of respondents with significant financial need indicated that, had it not been for NC Promise, they would not have been able to attend any college or university.

“All three NC Promise institutions are in historically under-served parts of North Carolina. UNC Pembroke and Elizabeth City State University are both historically minority-serving institutions. This program is a targeted intervention that lifts up the communities and families who need it most,” she said.

“There should be no question that an educated, leadership-ready workforce is absolutely essential for economic development, and we know that an affordable degree can transform a student’s future,” Morrison-Shetlar said. “North Carolina’s overall investment in higher education – and the groundbreaking NC Promise program – is a resounding win for all. Students win, their families win, the businesses that call our state home win, and we are a step closer to creating a thriving economy and a better life for all our citizens.”

Morrison-Shetlar described WCU as the westernmost institution in the globally recognized UNC System, with a mission of serving its region and community.

“As a regional comprehensive institution, we know the lion’s share of the work needed to lift families out of poverty happens at universities like ours,” she said. “We take that responsibility seriously.”

Joining Morrison-Shetlar to testify before the committee were Douglas Webber, associate professor of economics and director of graduate studies at Temple University in Philadelphia; Jenae Parker, student at Franklin University in Columbus, Ohio; Elizabeth Akers, senior fellow with the Manhattan Institute in New York; and James Kvaal, president of the Institute for College Access and Success in Washington, D.C.

The March 13 hearing was one of five scheduled by the Committee on Education and Labor on the topic of higher education and marked the formal start of an effort to reauthorize the Higher Education Act in the 116th Congress. Upcoming hearings will address “Strengthening Accountability in Higher Education to Better Serve Students and Taxpayers,” “The Cost of Non-Completion: Improving Student Outcomes in Higher Education,” “Engines of Economic Mobility: The Critical Role of Community Colleges, Historically Black Colleges and Universities, and Minority-Serving Institutions in Preparing Students for Success” and “Innovation to Improve Equity: Exploring High-Quality Pathways to a College Degree.”