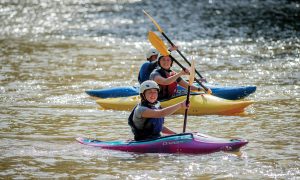 After besting the universities of Appalachian State, West Virginia, Clemson and James Madison in previous rounds of online voting, Western Carolina University is now battling it out with Lees-McRae College in the championship round of Blue Ridge Outdoors magazine’s “top adventure college” competition.

The contest began Feb. 25 and has included colleges and universities meeting in head-to-head matchups in a 32-school bracket. WCU and Lees-McRae have survived four rounds of voting through the magazine’s online poll to reach to the championship matchup.

Voting in the championship round to name the region’s “top adventure college” continues through 11 a.m. Monday, April 1. Visit contests.blueridgeoutdoors.com to view the bracket. Click on “Western Carolina University” to go to the voting page.