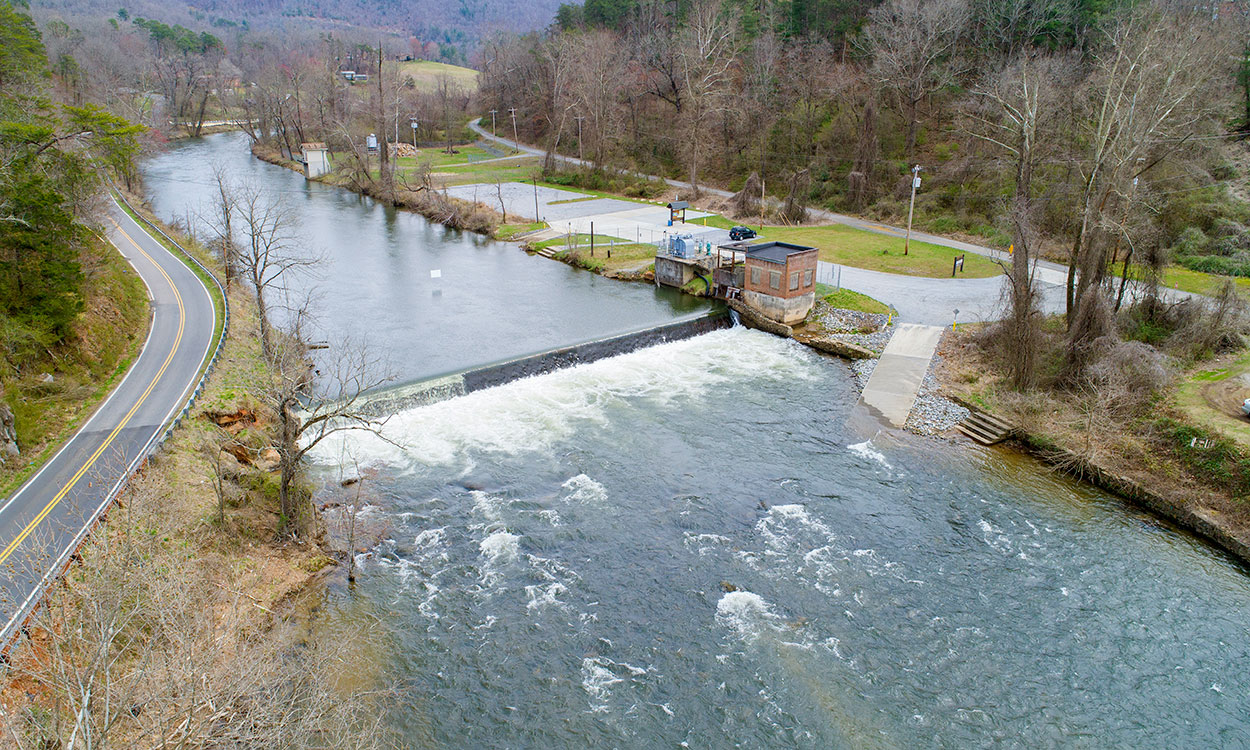 WCU officials want to determine whether the best option is to repair the university-owned Cullowhee Dam or find a way to remove the structure without putting a valuable water supply at risk.

Western Carolina University has received an engineering report commissioned by nonprofit group American Rivers indicating that removal of a university-owned dam on the Tuckaseigee River may be possible without jeopardizing a source of water that serves not only the campus but also much of Jackson County.

The report, also delivered to the Tuckaseigee Water and Sewer Authority, summarizes the findings of a study of the 1930s-era dam conducted by the engineering firm McGill Associates. Originally built to provide hydroelectric power to the campus and surrounding community, the dam has not generated electricity since the early 1940s. Intakes for raw water that is treated and distributed to WCU and TWSA customers are located behind the dam, which raises the river level behind it.

Because of structural problems with the dam confirmed during an assessment of the dam by the same engineering firm in 2017 and originally noted in a separate study by a different firm in 2005, the university is attempting to determine whether to repair the dam at an estimated cost of $900,000 or find a way to remove the structure without putting a valuable water supply at risk.

Taking down the dam became an attractive option after the nonprofit Cullowhee Revitalization Endeavor organization (also known as CuRvE) began exploring ways it could develop a river park at the area between the dam and Old Cullowhee Road on the backside of campus. Among the options is the creation of a notch in the top of the dam that would enable whitewater rafters and kayakers to traverse the roughly 7-foot structure.

The American Rivers organization, however, would prefer to see the dam removed in its entirety, which would connect 81 miles of river and tributaries upstream from the dam with the rest of a free-flowing Tuckaseigee. Early estimates put the cost of demolition of the dam and the subsequent water intake modifications that would be required at between $5 million and $7 million.

Mike Byers, WCU vice chancellor for administration and finance, said he and representatives of TWSA hope to engage with officials with Jackson County and the municipalities of Dillsboro, Sylva and Webster and the village of Forest Hills to seek their feedback on how to proceed.

“If there’s a way for the university to spend the same amount of money taking the dam down that we would on repairing it, that may be the way to go – as long as we could still maintain a water supply to meet current and future needs as well, or better. We must be very deliberate about due diligence before agreeing to demolition. It’s not just about a water source for WCU, but it’s also about a water source for our neighbors across Jackson County,” Byers said.

Although the study commissioned by American Rivers indicates that the dam could be removed without having a negative impact on the water supply, WCU and TWSA are seeking further study to determine what effect long-term drought could have on the water supply if there is not a dam in place to create an impoundment.

Dan Harbaugh, executive director of TWSA, described the additional study as, in part, conducting a risks-and-benefits analysis of four possible scenarios for the dam: do nothing; stabilize the dam; stabilize the dam and make improvements; or remove the dam. While the no-action option is not considered viable by WCU and TWSA officials, the other three options present an array of positive, negative and undetermined impacts that must be thoroughly analyzed, Harbaugh said. “There is no room for error here, no going back,” he said.

In the past, the community had used large, forested watersheds and impoundments as a water supply option, but abandoned them after construction of the current raw water intakes on the Tuckaseigee River at the Cullowhee Dam, which provides a more constant quantity and quality of water, Harbaugh said.

“There is no viable alternative for the future water supply needs of TWSA and WCU other than the Tuckaseigee River. The dam and in-stream impoundment is an important part of the current systems, and any change from that must be fail-safe. Removal of the dam is a one-time action,” he said.

“Although I believe that we’d all love to see unfettered waterways wherever possible, the removal of the dam in Cullowhee can occur only if it can be done without adverse impact on the community’s current and future public water supply needs,” Harbaugh said. “The final decision regarding the future of the dam can be made only after the collection of complete and validated information, and then be made in light of the identified risks and benefits.”

In the meantime, university officials say they will continue to monitor the dam to guard against the possibility of its condition worsening while the additional study is completed.

“We know that repairs are needed to make sure the dam continues to provide the necessary impoundment that our water intakes require, but we’re willing to hold off on those, at least for a little longer, so that additional study can take place,” Byers said. “If an appropriate study takes longer than we are comfortable with, we might have to do some of the work to buy more time responsibly.”

The latest report by McGill Associates lists several benefits to the removal of the dam, including increasing the range of two sensitive species – the Appalachian elktoe mussel and the sicklefin redhorse. With the successful removal of the dam in Dillsboro in 2010, the Cullowhee structure is the next upstream barrier to the river’s aquatic connectivity, the report states. And taking down the dam would result in increased use of the river for outdoor recreation, it says.

“While funding is scarce for repairing dams, there are several local, state and national sources of funding to support restoration projects, and American Rivers has a strong track record of securing funding and implementing successful projects,” the McGill report states. “Removal of the Cullowhee Dam would be a high priority for funding.”

Erin McCombs, conservation director for Southern Appalachia with American Rivers, said she is optimistic that dam removal is possible after reviewing the draft of the report, and that her organization “is committed to working with WCU and TWSA to make the community and the Tuckaseigee River more resilient.”

“American Rivers has worked on hundreds of dam removal projects across the country and, in our experience, dam removal takes, on average, three years from start to finish. In this case, we have a strong partnership and effective communication, so my hope is that we can meet or beat the average,” McCombs said.

“I’m very excited to connect funders to this multibenefit opportunity that will make the community and the river more resilient. Once we have agreement from the partners to move forward, we can seek funding from federal and state sources, foundations, corporate sources and private donors,” she said.

If an agreement is reached, WCU, TWSA and American Rivers will develop a proposal that includes the goals, the scope of the project and a timeline, and then will focus on working with other partners and funders to assemble the resources needed to complete the project, McCombs said.

Whatever happens with the dam, the university is supportive of efforts by CuRvE and others to help revive historic Cullowhee, Byers said. Located on Old N.C. Highway 107, the area served as the main entrance into WCU’s campus until the four-lane N.C. 107 was completed in 1981, and a once-vibrant section of the community entered a period of gradual decline.

“We’re in favor of pursuing all options and are a willing partner in redevelopment efforts in old Cullowhee, including the notion of a river park,” Byers said. “If we end up learning that removal of the dam is not possible without compromising our water supply, we would remain on board on working to create a notch to facilitate a river park.”

CareZone program to be offered Feb. 25 at University Center