In her unpaid position as a community ambassador on behalf of Western Carolina University during the decade that her husband served as chancellor, Barbara Coulter was known as a gracious hostess who made everyone feel welcomed, at home and very special as honored guests. That was the consensus from numerous members of the university community who shared their recollections of the former first lady of WCU following her death Dec. 29, 2018, at the age of 89. Her husband, Myron L. “Barney” Coulter, chancellor from 1984 until 1994, died in October 2011.

“The Coulters were strong stewards of Western Carolina University and moved it forward in many areas. They were always kind, welcoming and gracious,” said Jim Rowell ’71, retired director of public information at WCU. “She brought a high level of quiet sophistication and class to her role.”

Gary Ayers, a retired Allison Outdoor Advertising executive who is also known as the voice of Catamount athletics, characterized Barbara Coulter as “a fine lady who will be missed,” going on to say, “The Coulters were so special to me and WCU and all who knew them.” And Glenda Kucharski, wife of retired WCU General Counsel Rich Kucharski, described her as a “truly kind and generous lady” and remembered that “one cold football game, she had blankets sent down from her house so we could all wrap up.”

Born Dec. 26, 1929, Barbara Helen Bolinger married Myron Coulter on July 21, 1951, in Dunkirk, Indiana, and they had remained together for 60 years when he died in 2011. In addition to her time as WCU’s first lady, she served as interim first lady of Western Michigan University and as first lady of Idaho State University for eight years before coming to Cullowhee in 1984.

Recipient of the WCU Trustees’ Award from WCU in 1994, she and her husband hosted regular receptions at the Chancellor’s Residence to honor graduates and their families following commencement. Together, they developed and endowed WCU’s Coulter Faculty Center for Teaching Excellence, now known as the Coulter Faculty Commons for Excellence in Teaching and Learning. The university also is home to the Chancellor Myron L. “Barney” and Mrs. Barbara Coulter Distinguished Professorship in the Scholarship of Teaching and Learning.

“She touched thousands of lives with her graciousness, vitality and charm, and was the quintessential essence of a loving and devoted daughter, sister, wife, mother, aunt, grandmother and friend,” said daughter Nan E. Coulter. “We’re so relieved that she has reunited at last with Dad, and that their mortal separation of seven years, two months and 25 days has ended. They belonged at each other’s side. I know every one of those days was a tremendous burden on her heart that has now been lifted. Farewell, good and faithful Barbara. Dance with your beloved.”

S. Aaron Hyatt, former band director and dean of the Graduate School at Western Carolina University, died Oct. 16 at the age of 89. A native of Waynesville, Hyatt received his bachelor’s and master’s degrees at the Cincinnati Conservatory of Music and his doctorate in higher education and musicology at the Ohio State University.

He served four years in the U.S. Air Force in Florida and Alaska, performing in military bands. His love of music continued as he served as music director at Waynesville Township High School from 1958 until 1960 before holding the position of band director at WCU from 1960 until 1965. He then became director of research and development and director of the Mountain Heritage Center before serving for 10 years as dean of the Graduate School from 1975 until his retirement from WCU in 1985. Moving to Macon, Georgia, Hyatt served as president of Macon State College for 12 years.

Hyatt sustained his love of jazz by playing in the Big Bay Band in Sarasota, Florida, where he retired before moving to Columbia, Missouri, in 2012.

“This man had a positive long-lasting impact on our band program, the School of Music, as well as the entire WCU campus,” said Matt Henley ’83 MA ’95. “We are grateful to Aaron Hyatt for his love for WCU, and are especially grateful for his immense musical talent that he shared with our mountain community.”

Dr. Robert M. “Bob” Failing ’51, a longtime benefactor of Western Carolina University who received an honorary doctorate from the institution in 2007, died Sept. 1, 2018, at the age of 89.

A native of Michigan, Failing enrolled at Western Carolina Teachers College (now WCU) in 1948 after an unsuccessful college experience in California, and in later years he was quick to credit the mentorship and inspiration he received from faculty members in Cullowhee as a key to his successful career.

After graduating, Failing earned a medical degree at Duke University School of Medicine and began his 40-year career as a pathologist in Santa Barbara, California. In the late 1960s and early 1970s, he earned the title “river rat” by paddling some of the West’s best-known rivers, but Failing’s attention turned toward mountains at age 49. He was an avid mountain climber for the next 18 years, being the ninth person on record to summit all 50 U.S. state high points and reaching the high point on six of the Earth’s seven continents.

Failing was a member of WCU’s Foundation Board for more than 20 years, and he and wife Nancyann provided financial support for a wide range of WCU programs in the areas of academics, athletics, student recreation and the arts, including funding for an endowed scholarship for nursing majors and $100,000 for construction of the west stands of E.J. Whitmire Stadium. Years before WCU’s Campus Recreation Center and indoor climbing wall became a reality, the Failings financed the purchase of a climbing spire for students to use in honing their climbing skills. He later donated his collection of rare mountaineering books to Special Collections at Hunter Library.

As he received an honorary doctorate in science during a May 2007 commencement ceremony, Failing contemplated on the mentorship he received from J. Gerald Eller ’43, who taught biology when Failing was a student. “Over the 56 years since I graduated from Western, I have reflected many times on the impact this institution has had upon my life – what has made the difference between who I was and who I became,” he said. “It was, and is, the faculty – the dedicated teachers like Dr. Eller.”

Before he retired in 2009, Donald Newton “Newt” Smith had moved from a long stint as chair of the faculty to become associate chief information officer at WCU. It was a job he loved, one that enabled him to combine many of the incredibly varied skills he gained over a lifetime of truly diverse employment. He took charge of academic computing and gave WCU its first unified web presence. That culminated a career that didn’t always go smoothly.

Newt stopped trying to be a nuclear physicist after “he and higher mathematics didn’t see eye to eye,” his wife, June, told me. His switch to English at UNC put him so far behind that he was still there in October 1961, when he met his future wife over 10-cent cherry pie while both were covering John F. Kennedy’s Founder’s Day visit for the school paper. “It was love at first sight,” June said. Newt proposed at Christmas.

After finishing his doctorate course work, Newt became a Russian linguist, transcribing teletypes from spies in East Germany. He came to WCU in 1968, but his first tenure bid faltered when WCU’s president put a moratorium on granting tenure. Letters of support included praise from his dissertation director, who called his investigation of Black Mountain poets impressive and publishable. Newt’s second tenure bid in 1974-75 was denied on what some called a technicality, others called an administrative foul-up and others called retaliation (Newt and two colleagues, fired at the same time, had been active in forming a local chapter of the American Federation of Teachers). In fact, the AFT’s lawyers defended the three in a U.S. district court trial, but in September 1975, the jury found for the defendants for lack of evidence.

Newt didn’t leave his home and the 40-acre Tuckasegee farm he called Argura. He started an advertising firm and delivered print and video media. He collaborated with June on a successful nursery, diving happily into course work on horticulture. By the time I came to WCU in 1995, he had been rehired, first as a visiting professor and then, once again, as a tenure-track assistant professor. He received references from a physicist with whom he’d worked on a National Science Foundation grant, an advertising client and a host of English colleagues, one of whom cited his “contagiously enthusiastic advocacy of our discipline.” His resume was crammed with microgrants, honors college projects and lectures on Appalachian studies.

We weren’t friends at first. Newt would get in your face. He had a big smile – and a bigger personality. He and I applied for the same position, and I thought I would never get noticed with his loud voice and his joyous laugh. Newt’s birthday was on Halloween, and I remember thinking that a man who so resembled a jack-o’-lantern could have been born at no other time.

I came to see what others saw in Newt. We had our first bout with chemo at the same time, and I loved his relentless positivity, his ebullience in the face of disappointment, his passion for poetry and his support of his family. Several of our friends died recently, and we saw each other frequently at funerals, joking that at least we were still alive. I remember thinking he’d weathered so much that he’d probably live forever.

I’m sorry I was wrong. 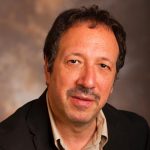