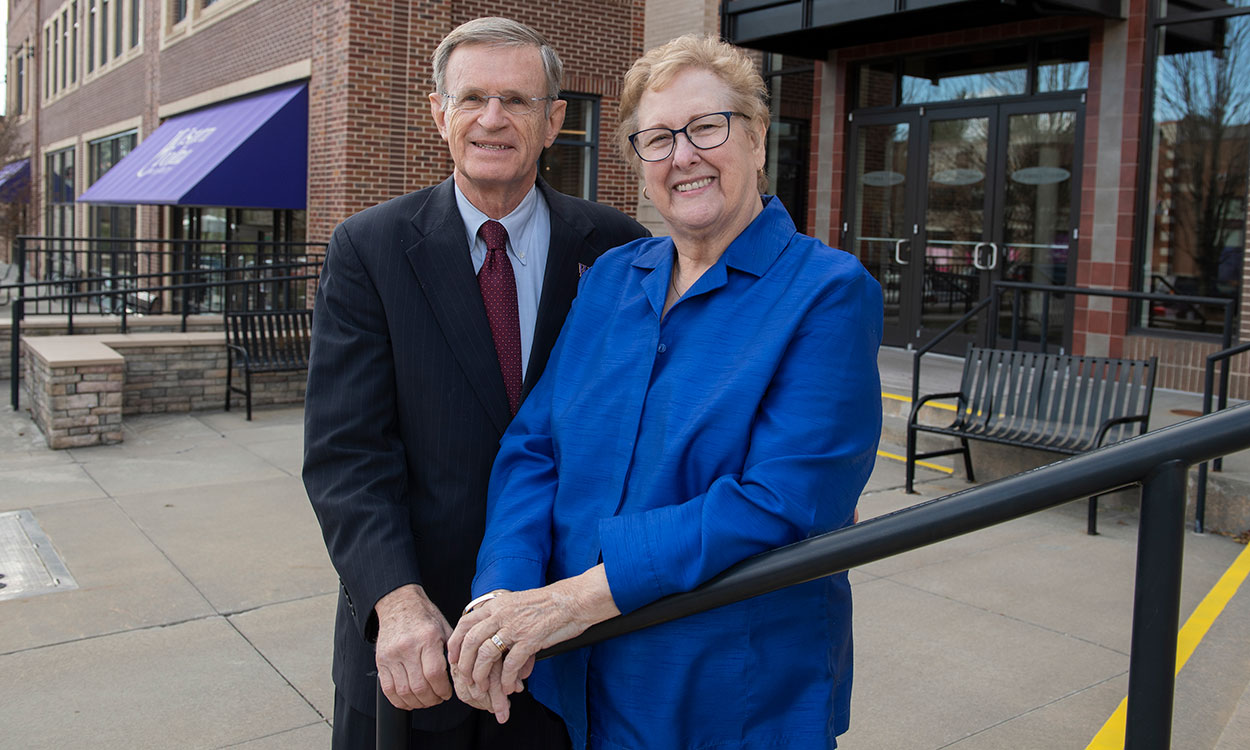 Western Carolina University’s “Lead the Way” comprehensive fundraising campaign crossed a major milestone when a gift commitment from former Asheville Mayor Charles Worley and his wife, Nancy Worley, pushed the amount raised across the $55 million mark and closer to its ultimate goal of $60 million by spring 2019.

WCU Interim Chancellor Alison Morrison-Shetlar announced the Worleys’ pledge, which takes the form of a type of planned giving called a charitable remainder trust, during the university’s annual scholarship recognition luncheon held earlier this month. The Worleys’ gift pledge of more than $400,000 will be used to create an endowed scholarship fund to provide financial support to students enrolled in graduate degree programs at WCU, especially those who are taking graduate courses at the university’s instructional site at Biltmore Park Town Square in Asheville.

The couple decided to designate their contribution to help WCU graduate students because of the positive experience enjoyed by their daughter, Megan R.W. Coaplen, who earned her master’s degree in school counseling at WCU in 2012. A school counselor at Buncombe County Middle College, Coaplen was enrolled at WCU at a time when there were no scholarships available for graduate students, forcing her to incur debt in order to obtain her master’s degree.

Although Worley, an attorney with the Asheville firm of Worley and Peltz, did not attend WCU, he said he and Nancy were motivated to give to the university because of the significant impact it has on the Western North Carolina region and its people.

“Nancy and I have created a trust to pay out when we go out of this world, and we wanted to direct the assets of that trust to the benefit of Western Carolina University,” said Worley, a former member of the WCU Board of Trustees. “Western is much more deserving of our charitable giving because of what it does for Western North Carolina and for our students.”

Asheville mayor from 2001 until 2005, Worley was a member of the Board of Trustees and served on the search committee that brought David O. Belcher, the late WCU chancellor whose personal passion for philanthropic giving in support of scholarships for students inspired the “Lead the Way” campaign.

“I truly fell in love with Western Carolina University through my service on the Board of Trustees and my interactions with David Belcher,” Worley said. “I was extremely impressed with all that David Belcher did on behalf of students during his all-too-brief time as chancellor. He set an example to be followed by others.”

Although Worley rotated off WCU’s Board of Trustees on July 1, 2011, Belcher’s first day on the job as chancellor, he said he has been watching the progress of the university from afar during the past seven-plus years.

“I have to confess that it was a true disappointment for me to go off the Board of Trustees just before he officially took the position of chancellor,” said Worley, who recently was named to Western Carolina University’s Foundation Board of Directors. “I regret not being having the opportunity to directly serve under him, but I will continue to work diligently in support of the thing that was most important to him and his wife, Susan. And that is providing financial support for our deserving students.”

Belcher, who had been battling brain cancer since April 2016, died June 17, 2018, at the age of 60. In his installation address in March 2012, he identified increasing financial support for WCU students as the top philanthropic priority of his administration. In October 2017, shortly before he would announce that he would be going on medical leave at the end of the calendar year, he and Susan announced their own personal pledge of $1.23 million for scholarship support. 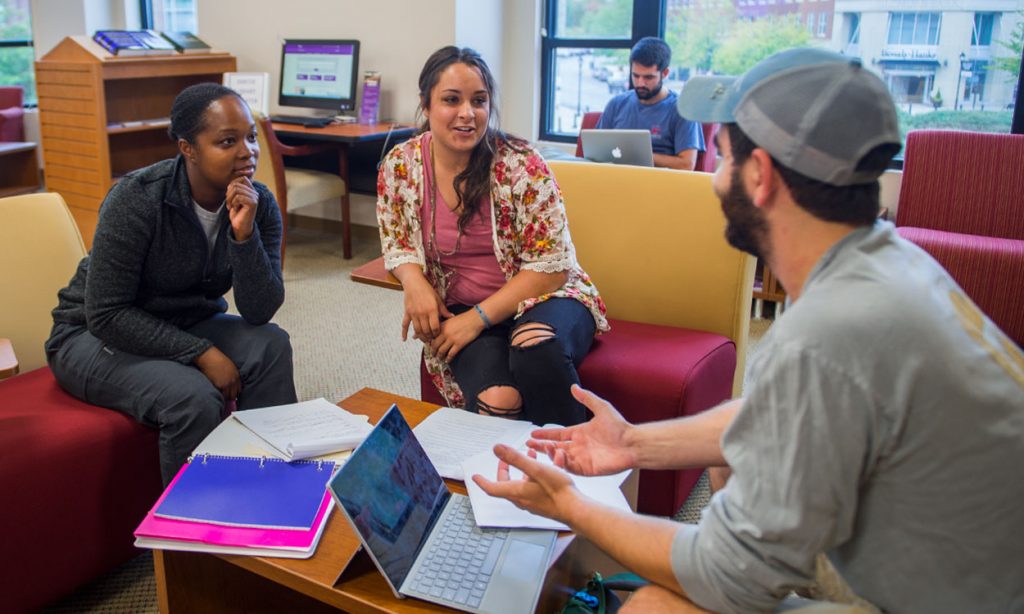 WCU graduate students discuss their assignments before a class. The gift pledge from Charles and Nancy Worley will be used to create an endowed scholarship fund to benefit students enrolled in graduate degree programs at WCU, especially those taking graduate courses at the university’s instructional site in Asheville.

That announcement has inspired many others – including the Worleys – to make gifts through the “Lead the Way” Campaign. In March 2017, WCU announced a new goal of $60 million to be raised through the campaign, which is $10 million more than originally planned, with a deadline of early 2019, two years earlier than previously envisioned.

During her remarks at the Nov. 1 luncheon at which she shared news of the Worley gift, Morrison-Shetlar asked the student scholarship recipients and donors in attendance to take some time to get to know one another.

“Students, you are looking at people who know the awesome power of a university education. They know how it can open your eyes and your mind to new perspectives and possibilities. They know how it will prepare you for the days ahead and set you up for the kind of success you desire and deserve. They are so fully confident in the power of education to transform lives that they have been moved to give back in the most significant and lasting way possible – through endowed scholarships,” she said.

“To our supporters, as you look around your table at these young scholars, you are looking at our collective futures. In the not too distant future, they will be our teachers, our doctors and our managers. They will run companies, invent things that we have not yet imagined and solve problems in our communities and our world. They will lead our region, our state and our nation. And when they reflect on how far they have come, they will remember this place, and they will remember you,” Morrison-Shetlar said.

For more information about the campaign, visit the website LeadTheWay.wcu.edu. 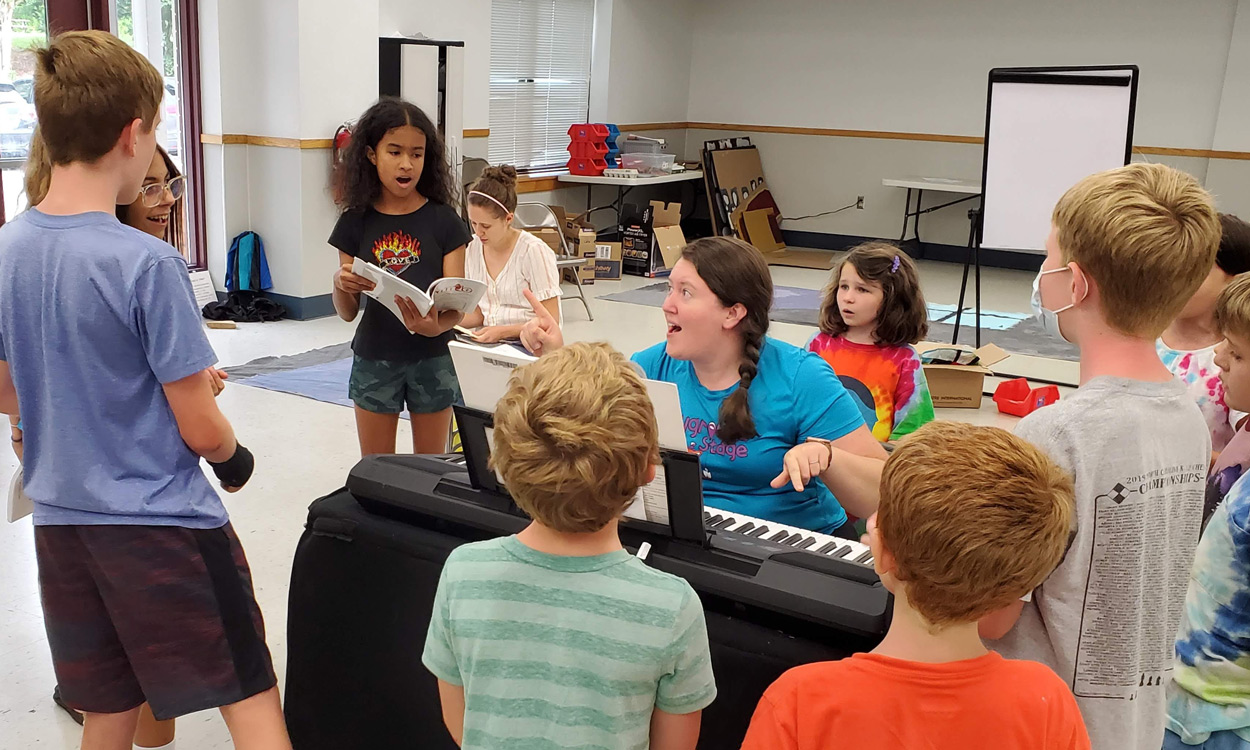 Theatre grad setting the stage for learning in Buncombe County