Wells endows scholarship in honor of university's contribution to her life 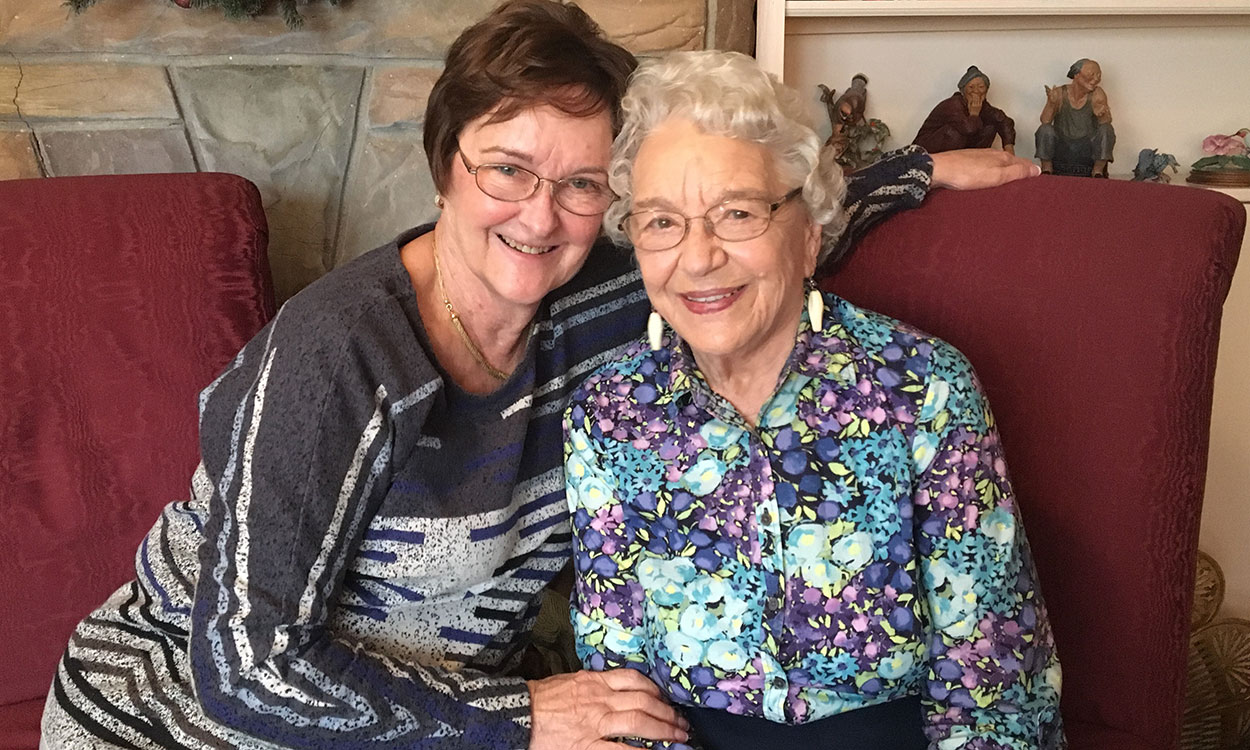 Katherine Brown Wells (right) gets together with her namesake and niece Kathy Abbott Beam. Wells grew up in Cullowhee across the street from the school that became WCU, where her neighbors included professor Cornelia Camp and the school’s first president, Robert Lee Madison.

Growing up in the Dix Gap community of 1920s Cullowhee, Katherine Brown Wells had a front-porch view of Western Carolina University as it evolved from start-up high school to junior college to full-fledged four-year institution. But she didn’t just sit and watch the action unfold. She immersed herself in it.

“It really is the foundation for my whole existence,” said Wells, 97, who graduated with an education degree in 1941 from what was then Western Carolina Teachers College. “I have profited every minute I was at my little school.”

Wells is so grateful for her time in Cullowhee and at WCU that she established the Katherine Brown Wells Endowed Scholarship to provide financial support for deserving students who attend WCU. “I’ve always wanted to give back to my little community,” said Wells, known to many as “Aunt Katherine.”

Wells’ gift is part of WCU’s “Lead the Way,” a comprehensive fundraising campaign inspired by the leadership of Chancellor David O. Belcher, who died June 17 after battling brain cancer since April 2016. Belcher and wife Susan announced last October their pledge of $1.23 million in financial support for the “Lead the Way” effort, an announcement that has resulted in numerous other contributions.

Wells credits her parents – especially her mother – with purposely choosing to settle the family near a budding university after they moved to Western North Carolina from Roanoke, Virginia, where Wells’ father, Frank G. Brown, had managed a hardwood flooring company. He moved the family to Sylva in 1921 to work for the Blackwood Lumber Company — it had Roanoke ties — after it purchased more than 45,000 acres of forest land in Jackson County in 1920.

But Wells’ mother, Minnie – who was three months pregnant with Wells, the couple’s third child, when they moved — missed the cultural and educational opportunities they had in Roanoke. When she heard the high school was going to become a teacher-training school, she knew she had found her place. “I was born in Sylva, and while mother and daddy were trying to figure out where to live, mother told daddy she didn’t want to bring her children up in a labor camp,” Wells said. “She said, ‘why don’t we go to Cullowhee? Professor Madison lives there.’”

And so they did, sharing their Dix Gap community with Professor Robert Lee Madison, the school’s first president, and professors Cordelia Camp and Edgar Stillwell, among other university faculty and administrators. “We were friends with the president of the college and his wife and children,” Wells said. “And I was so crazy about him. He was just the sweetest old man. He loved children, and he always carried chewing gum.” 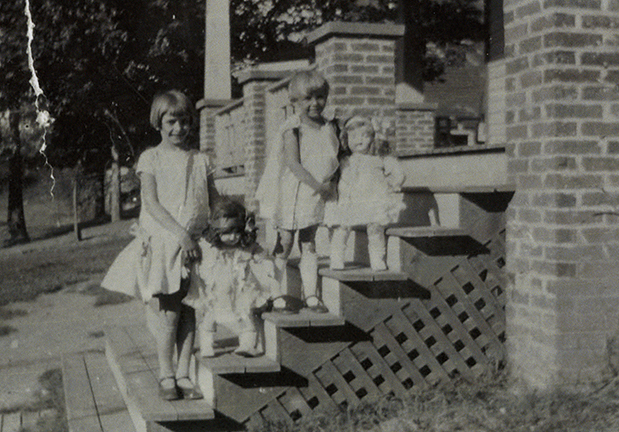 A 5-year-old Katherine Brown (right) plays with her 11-year-old sister Dorris Brown and their dolls on the front steps of their home in Cullowhee.

Back then, the Brown family home stood across from where the Bird Alumni House now stands, said Wells’ niece, Kathy Abbott Beam, who graduated from WCU with a bachelor’s degree in 1967, a master’s degree in 1979 and an education specialist degree in 1983. “Everybody just lived right there together. They went to school together and played together.”

Wells remembers playing in her front yard one day when Camp, an associate professor of education, stopped to chat. It was a brief conversation, said Wells, but one Camp remembered years later. “Miss Camp was walking up the street in front of our house in Cullowhee,” Wells said. “She said, ‘hi, little girl. What is your name?’ And I said, ‘Black Eyes.’ The first quarter I went to college, I had a class with her, an elective called “North Carolina History.” She was reading the roll, and she looked up and said, ‘well if it isn’t little Miss Black Eyes.’ And here I was young, I was just 16 when I went in to college that fall. I was trying to act like I was as old as the others. I thought I would just die. But she was outstanding. She stressed reading. You can’t do anything if you can’t read.”

As the little school grew and evolved, so did the opportunities for the families who lived nearby. Because the school had electricity, so did the neighboring homes, unlike most of the county. Wells and her sister Dorris took 12 years of voice and piano lessons from the school’s music professors and checked out books from the college library. “We had things that people just a couple of miles out of the little community didn’t have,” Wells said. “It was almost like being in town but it wasn’t in town. Everything revolved around the college. The people in the community felt like they owned it. It was just a part of our lives.”

At 16, Wells entered WCTC, having skipped two grades in early elementary school. She served as editor-in-chief of the Catamount yearbook her senior year, secretary/treasurer of her freshman class and president of the Schubert Glee Club. She also was a commencement marshal and a member of the May Court, the Marshals’ Club, Dramatics Club and Halcyon Chorus. “I have grown up loving books, and I got that from college,” Wells said. “And our practice teachers were serious about learning to be teachers. I can’t think of a teacher who didn’t do a good job.”

She married Harold Wells in August of 1940 and graduated from college the following spring. The couple moved to Murphy, where his family had a dairy farm. Within the year, Harold Wells had joined the Army Airforce — motivated by the bombing of Pearl Harbor — and was stationed in Bari, Italy. He served as a B-24 Liberator pilot, flying 52 combat missions over Europe, with the same crew and plane, Wells said. They were married for 49 years before he died in 1989 at age 68. His Army hat sits atop Wells’ century-old piano. “I think that he was one person that I have known who died feeling that they had accomplished everything,” she said of her late husband. “Everything was just right.”

After she married, Wells taught school for a few years, but eventually quit to stay home with their four children. “I knew I would be shorting one or the other, and I felt like my family needed me worse,” she said. Her husband left the dairy business to start his own heavy equipment business and develop two shopping centers in Murphy after U.S. Highway 129 was put through their farmland.

Her home of nearly 75 years sits atop a small hill overlooking her property that’s been divided by roads and development. The cattle have long since been replaced by cars, the barn by businesses. A stately grove of oak trees stands sentinel against the encroaching commercialism below. But Wells is matter of fact about the future after she is gone. “This house will be torn down and leveled,” she said, looking around the home she built with her husband a few years after they married. “My boys have heavy equipment. They’ll level it to the highway and it will be enough acreage for some really good business of some sort, with Murphy growing, hopefully.” 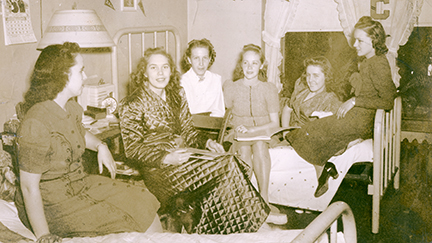 Katherine Brown (far right) visits with her fellow students at what was then called Western Carolina Teachers College.

But it’s 1920s Cullowhee that keeps Wells talking, smiling and reminiscing, where her formative years are forever etched in her heart and mind. There was a one-man garage over here and Henson’s Grocery over there, she said, which her father bought after the lumber business began to wane, then washed away in a flood in 1940.  There was a post office, the bridge and another grocery store down the road. And, of course, Western Carolina University.

For 19 years, these landmarks and the people who built them were home to Wells and her life. “I just cannot complain because I was fortunate to have Cullowhee, that little strip of people,” Wells said. “They were educated and they were progressive. When I say my prayers at night, I say I’ve been blessed. I don’t know anybody who feels any more grateful.”

And she means it. Giving back to the place that gave her so much is the exclamation point on a life well lived, she said. “I can die happy.” 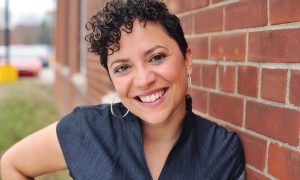