THE VIEW FROM HERE

This story began some 50 years ago in rural Haywood County. It’s the story of a young boy living with his parents, supported by the land and crops they raised. The boy grew up plowing tobacco with a mule, no television, cooking on a wood stove and spending much time looking at the north end of a southbound mule.

This boy dreamed of going to college, yet no one in his family had ever done so. My grandparents couldn’t read or write, and my mom has a fifth-grade education. Yet they instilled in me a work ethic, a sense of confidence and a drive to better myself. They realized the power of higher education and pushed me to attend college. 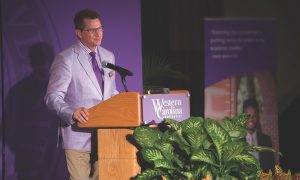 We’ve all had people in our lives who’ve had a profound impact on us and perhaps didn’t realize it. I attended Tuscola High School as a somewhat introverted teenager unsure how to tackle this world of college. I had a guidance counselor who helped me build that bridge. Like many, I wanted to attend UNC-Chapel Hill, N.C. State or Duke University, but Tom Dowell MAEd ’70 steered me toward WCU.

Although my academic credentials would have allowed me to go anywhere, Tom knew WCU was the right place for a first-generation, college-bound country boy. I never had seen the ocean, been on an airplane or traveled more than 250 miles from home. I can imagine how long I would have survived at Duke – not very long.

I arrived at WCU thinking I was well-prepared. I took calculus four days a week at 8 a.m. my first semester. I liked it so much, I took it again the next semester. I think you get my message. I made a 17 on my first organic chemistry exam my sophomore year.

At most institutions, I would have been back home, looking at the north end of that southbound jackass. Not at Western. My professors were personally vested in my success. I recall meeting my organic chemistry professor to discuss my exam grade of 17. He politely advised me to consider another major. I politely refused. He said if I would commit myself, he would do the same to ensure my success in this class. This was a turning point.

To help pay for college, I worked. I also had an academic scholarship, grants and loans. Without the Helder Scholarship, attending WCU would have been even more challenging. Western was reaching out to me with a big helping hand. All that was required was for me to reach back. That I did.

You see, Western is different. This institution isn’t just in the business of educating young people; it is in the business of “changing lives.” Western was committed to my success as a first-generation college student dependent on the generosity of strangers for scholarships. As a regional comprehensive institution focused on the state’s westernmost mountain counties, Western was committed to its mission and to my success.

Western Carolina allowed this Haywood County boy to grow up and have a successful career in the chemical industry. Today, I am president of a chemical company in Philadelphia. From a young boy plowing tobacco who had never ventured far from home to now having visited over 40 countries in my life – that would not have happened without the support of donors and the commitment of this fine institution to student success.

There are thousands of Kenny Messers out there. Unlike me, they may not have encouraging parents or a Tom Dowell, but they can have a chance. Through financial contributions of others, they can make that dream a reality. That’s why, for the 31 years since my graduation, I’ve contributed every year to Western. I owe this university.

I not only owe this university, but I have an obligation to ensure that future generations have the same opportunities afforded to me. I offer my gratitude to all donors for helping this institution in its mission of changing lives.

And, I encourage today’s scholarship recipients to realize that someone worked hard for the money to fund your scholarships. They made a conscious decision to sacrifice so you could attend WCU. Make the most of your education, go make a difference in the world and, most importantly, give back to this university in a bigger way than you received.