Student Democracy Coalition awarded for its civic engagement by AASCU

The American Association of State Colleges and Universities has named WCU’s Student Democracy Coalition the winner of its Civic Learning and Community Engagement Award. The award will be presented Oct. 28 at the opening session of the AASCU’s annual meeting in Washington, D.C.

The winning entries needed to show evidence that the initiative had top-level administrative support, connected with an institution’s mission and strategic agenda, contributed to significant institutional improvement or programming, was grounded in research and incorporated best practices. 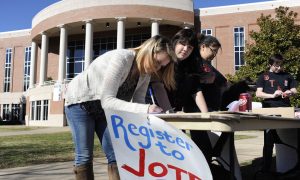 “Simply stated, the SDC is changing the way WCU students think about civic engagement and the way the community and candidates view students,” said Lane Perry, director of WCU’s Center for Service Learning. “From the students, I have seen a new level of recognition and appreciation of the freedom, of the right, of this responsibility to be informed, to vote and to care. It is important to remember that behind every submitted voter registration, there is the person registering them to vote - this is where you will find the SDC.

“Behind every program designed to inform and educate voters on the issues, there is the person developing that program - this is where you will find the SDC. Behind every petition to push and advocate for issues that make civic caring easier and more likely, there is the person with the clipboard and pen - this is where you will find the SDC. The point is this - the SDC is there to advocate for students' civic engagement and to be the example that supports this engagement.”