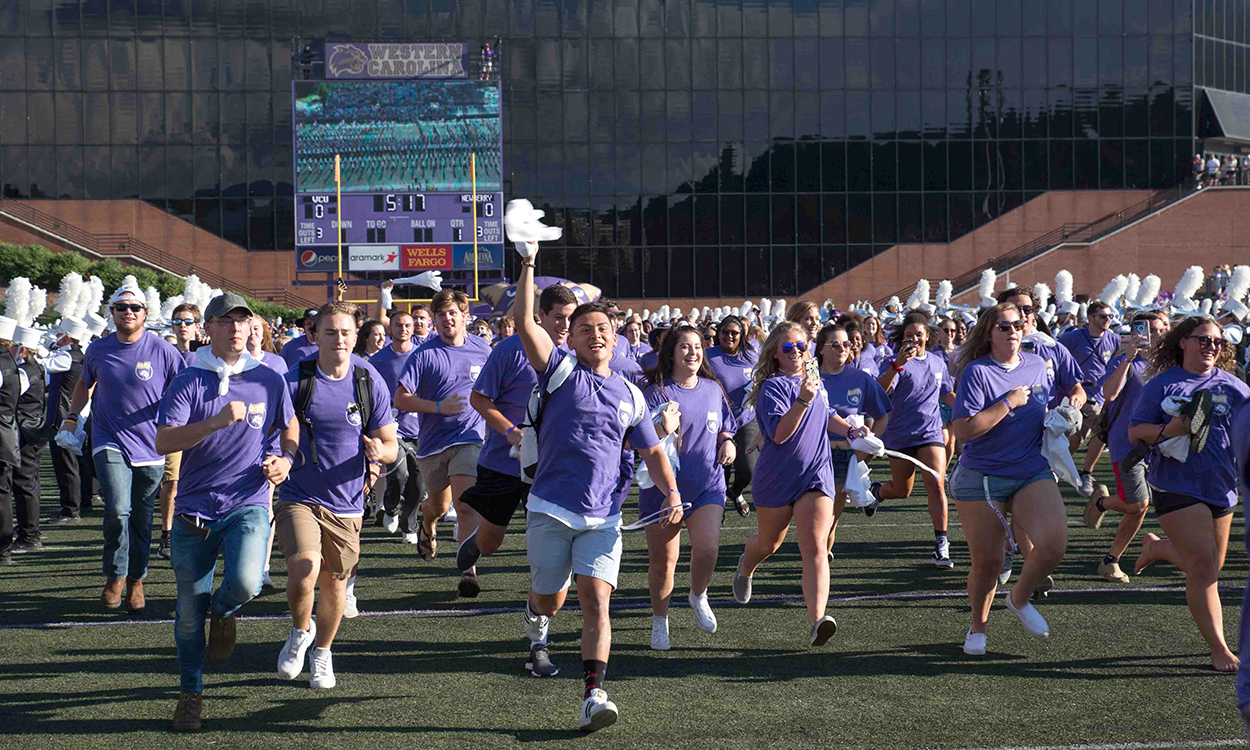 WCU first-year students charge across the field at E.J. Whitmire Stadium during the annual Freshman Run, held just prior to kickoff at the football home opener against Newberry on Saturday, Sept. 1. They are part of the largest class of freshmen in the university's history.

It’s beginning to sound like a broken record, this talk of broken records when it comes to enrollment at Western Carolina University where, for the third consecutive year and the seventh time in the past eight years, the institution is experiencing increases in both the size and academic qualifications of its student body.

Just one year after total student enrollment topped 11,000 for the first time ever, this fall’s total student headcount stands at 11,639, representing a 5.5 percent increase over last year’s previous record. Total enrollment at WCU has increased by 2,589 students, or nearly 29 percent, since 2008, when the total student tally was 9,050.

The total number of new first-time full-time students surpassed the 2,000-mark for the first time in university history, with a freshman class of 2,189, a 10.5 percent increase over last fall’s freshman class of 1,980. The average GPA of this year’s freshman class is 3.92, up from 3.83 last fall and another high-water mark for the institution. Enrollment also is up among continuing students, highlighted by a freshman-to-sophomore retention rate that is holding steady at 80 percent.

Among additional enrollment statistics of note are an increase of almost 37 percent in the number of first-time, first-year students in WCU’s Honors College for high-achieving students, up from 331 last year to 453 this fall, and a 10.5 percent increase in new graduate students, up from 580 last fall to 641 in 2018.

University officials point to a number of factors behind WCU’s surge in enrollment over the past several years, including several high-demand degree programs, interest in the Pride of the Mountains Marching Band, the growth of the Honors College and new and renovated residence halls and dining facilities providing the type of amenities demanded by today’s students, in addition to the campus’s mountain location and access to outdoor adventure activities.

“I like to think of WCU’s recent enrollment trend as a propulsion rocket,” said Phil Cauley, assistant vice chancellor for undergraduate enrollment, who has crunched application, admission and enrollment numbers for three decades. “Fueled in large part by the dedication of faculty and staff who embraced a vision for excellence and growth, WCU has ascended steadily, sustainably and strategically since 2011. Then along comes NC Promise, and that is like another splash of jet fuel on our already upward enrollment.”

While new residence halls, numerous dining options and all the whitewater rafting and mountain biking anyone could handle are nice, such amenities are not at the top of the list of guiding factors when students are trying to decide where to go to college. Instead, the most important considerations are related to academic programs, a survey of the 2017-18 freshman class indicates.

In that survey, 78 percent of responding students pointed to both academic program availability and academic program quality as either the deciding factor or a consideration that played a large role in the decision-making process.

“Students are program and quality focused. Families are value conscious,” Cauley said. “Students are asking, ‘Does your university have the academic program I want to study for the next four years of my life, and, if so, is it a high-quality program?’ And parents care a lot about the investment – ‘Are we getting the best bang for our buck?’”

Among the undergraduate programs seeing significant growth at WCU, each of which have added more than 100 students over the last decade, are biology, business administration and law, criminal justice, communication sciences and disorders, entrepreneurship, emergency medical care, finance, marketing, music, nursing and psychology. 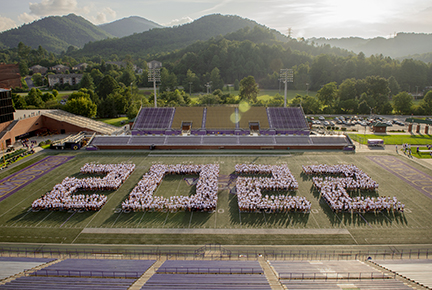 WCU’s first-year students gather for their class photo at the start of fall semester. Typically, from 10 to 12 percent of the university’s freshmen are members of the Pride of the Mountains Marching Band, and they comprise the first “2” in 2022.

Recently added undergraduate programs – such as engineering, which launched as a stand-alone program in 2013 on the Cullowhee campus and expanded to WCU’s Biltmore Park instructional site in 2014 – are playing a role in the enrollment increase, university officials say.

For example, approximately 50 students have declared a major in a new integrated health sciences degree, which began this fall as an option for students with a broad-based interest in the health care profession, said Ericka Zimmerman, director of WCU’s School of Health Sciences.

Not all of WCU’s enrollment growth is occurring in terms of residential students, who take classes in Cullowhee and in Asheville at Biltmore Park. Three of the university’s most popular undergraduate programs are offered via distance education – including longtime online programs in criminal justice and emergency medical care and, moving online in 2015, business administration and law – helping to drive a 3.7 percent increase in students taking only distance courses this fall.

In addition to the availability and quality of academic programs, affordability is a factor for students as they weigh college choices – perhaps an even more significant factor for parents. WCU is consistently listed as a “best college value” in an annual review of colleges and universities by Kiplinger’s Personal Finance magazine, a ranking that incorporates measurements of both academic quality and affordability, with more weight given to academic quality.

“Western Carolina University has long been known as an incredible higher education value, offering high-quality academic programs at an affordable cost,” said Interim Chancellor Alison Morrison-Shetlar. “With the onset of the NC Promise tuition plan, a Western Carolina University education becomes an even better value for our students and their parents. We are excited to be a part of this effort to improve affordability for North Carolina families and to help reduce the amount of student loan debt facing our graduates, leaving them with more money in their pockets to invest in their local communities.”

UNC System President Margaret Spellings said NC Promise is “an ambitious and bold answer to the legitimate concerns about college costs and student debt. Here in the state that invented public higher education, our lawmakers have helped put an affordable degree within reach of every North Carolinian.”

NC Promise is not a factor, however, in the 10.5 percent increase in the number of new graduate students enrolled this fall, because the tuition plan applies only to undergraduate students, said Brian Kloeppel, WCU Graduate School and Research dean.

“We conferred degrees on 358 graduate students following commencement ceremonies in May, and the relatively large graduating class opened up more seats for newly admitted graduate students for this fall,” Kloeppel said. “The majority of our graduate programs are enrolled at the same or higher level as last fall, and our newly added doctor of nursing practice program in nurse anesthesia is at full capacity.”

In addition, a new doctoral program in psychology will begin next fall with an emphasis on providing practicing professionals to serve rural populations, which is a traditionally underserved group in mental health.

Another factor in WCU’s enrollment growth, university officials said, is the exploding popularity of the Pride of the Mountains Marching Band, which has earned national acclaim for its innovative halftime performances. The band won the prestigious Sudler Trophy (often called the Heisman Trophy of the college band world) in 2009, marched in the 2011 Tournament of Roses Parade on New Year’s Day, and led the Macy’s Thanksgiving Day Parade in New York in 2014. Earlier this year, the band received a rare invitation to return to the Macy’s parade in November 2019.

Membership in the band ranges from 425 and 505 members, with this year’s edition of the Pride of the Mountains boasting 490 members, 212 of whom are freshmen, said Matt Henley, assistant director of athletic bands. “Typically, between 10 and 12 percent of Western Carolina University’s freshman class is in our band,” Henley said. “That compares to 0.8 percent nationally.”

Although WCU classes began Monday, Aug. 20, enrollment is not official until after the 10th day of classes, referred to as “census day.” The enrollment numbers are from census statistics compiled by WCU’s Office of Institutional Planning and Effectiveness and announced Aug. 31. Even then, the numbers are not considered final until the files have been submitted to the University of North Carolina System. 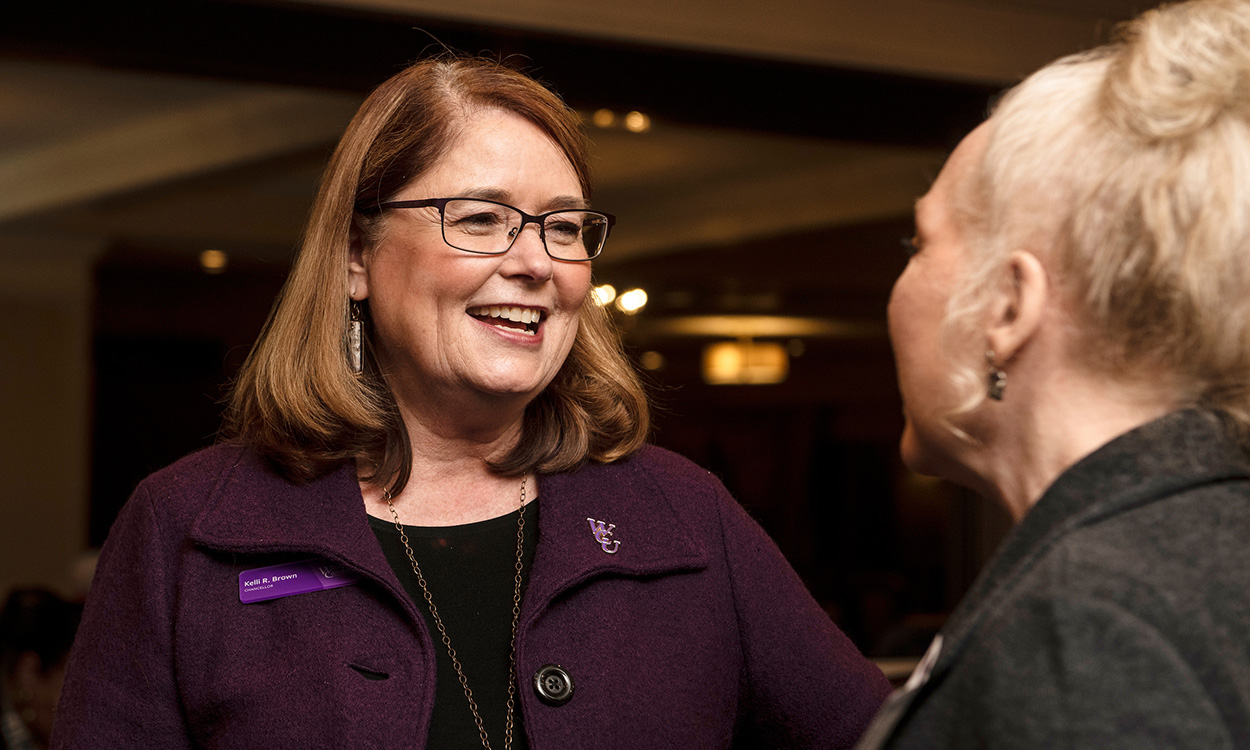