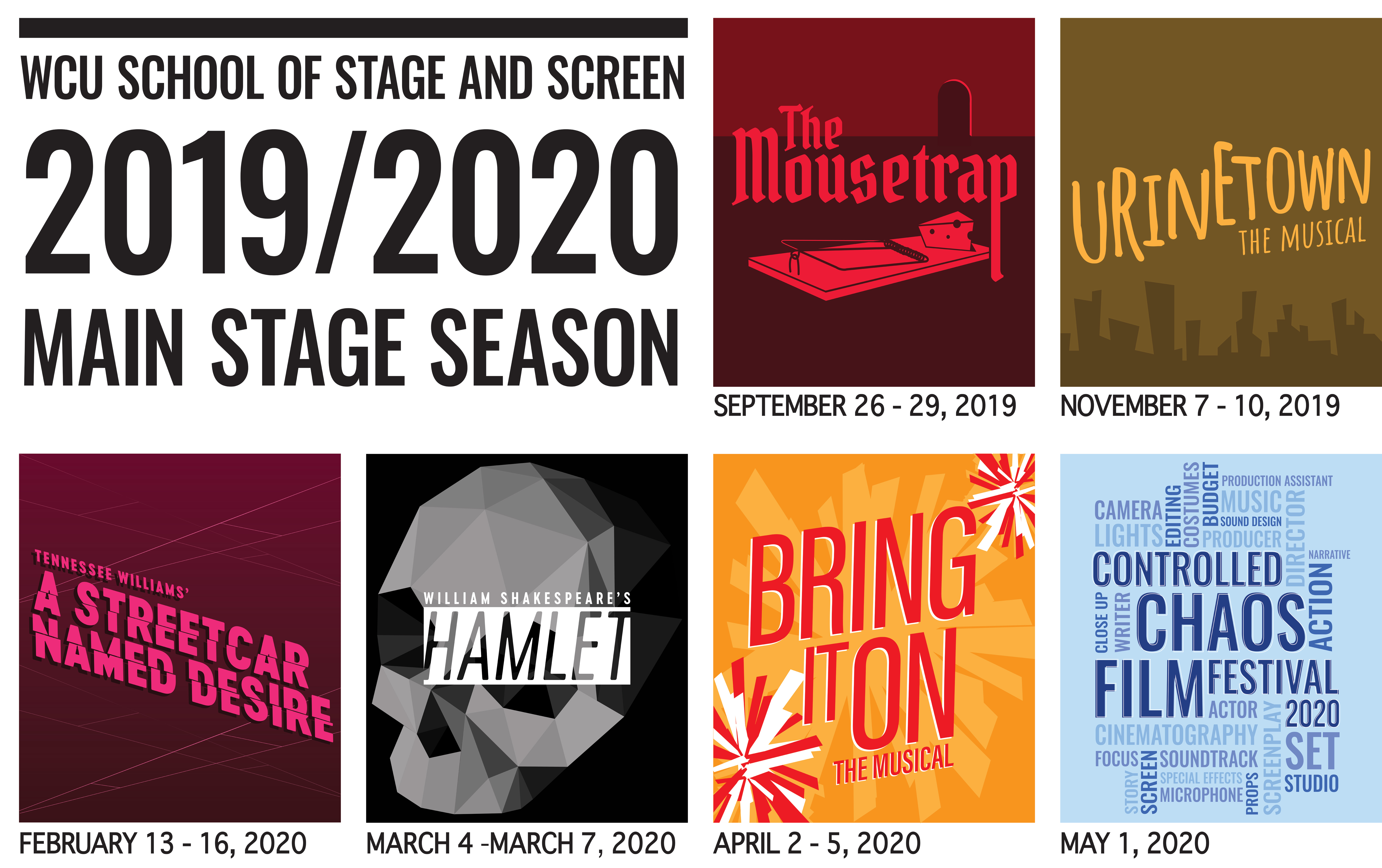 Bardo Arts Center and the entire Belcher College of Fine and Performing Arts will be cancelling all face-to-face events for the remainder of the spring 2020 semester. The Western Carolina University Fine Art Museum will also remain closed until further notice. For ticket refund information, virtual event opportunities, and more, please read our full update here: ARTS.WCU.EDU/COVID-19

Students in The School of Stage and Screen have the opportunity to participate in a diversity of productions, whether behind the scenes, on the script, behind the camera or on the stage.

We Start the season off with the world’s longest initial run of any play: the murder mystery, The Mousetrap, by Agatha Christie. Directed by Terry Martin, The Mousetrap will run from September 26th to September 29 in University Auditorium.

Next up is the topical musical, Urinetown the Musical. A terrible water shortage, caused by a 20-year drought, has led to a government-enforced ban on private toilets, regulated by a malevolent company that profits by charging admission for one of humanity's most basic needs. Amid the people, a hero decides that he's had enough and plans a revolution to lead them all to freedom! Directed and Choreographed by Ashlee Wasmund, with Musical Direction by Kristen Hedberg, Urinetown the Musical will run from November 7th to November 10, in University Auditorium.

The Spring semester opens with one of the most renowned plays of the American Theatre, A Streetcar named Desire, by Tennessee Williams. In a post-World War II New Orleans, Louisiana, the French Quarter becomes a pressure cooker of sensuality and class tensions between the genteel Blanche Dubois and brooding Stanley Kowalski, ultimately erupting in some of the most iconic dramatic moments seen on the modern stage. Directed by Colin Wasmund, A Streetcar named Desire will run from February 13th to February 16th in University Auditorium.

Next up for the Spring semester is a new adaptation of William Shakespeare’s tragedy, Hamlet. Adapted and directed by Dr. George Brown, Dean of the Belcher College of Fine and Performing Arts, this is a unique exploration of Hamlet’s descent into madness after vowing revenge against his father’s murder at the hands of his uncle. Hamlet will run from March 4 to March 7 in the Josefina Niggli Studio Theatre in the Bardo Arts Center.

Completing the theatre season will be Bring it on the Musical, the story of the challenges and unexpected bonds formed in the competitive world of cheerleading as they vie for the ultimate competition: The National Championship.  Directed by Terrence Mann, Bring it on the Musical will run from April 2nd to April 5th in the Bardo Arts Center Performance Hall.

Rounding out the 2019/2020 Stage and Screen season is the most exciting single night of the academic year, the Controlled Chaos Film Festival, a celebration of numerous narrative and documentary films created by the students in the Film and Television Production program.  Controlled Chaos will be held on May 3rd at the Bardo Performing Arts Center.