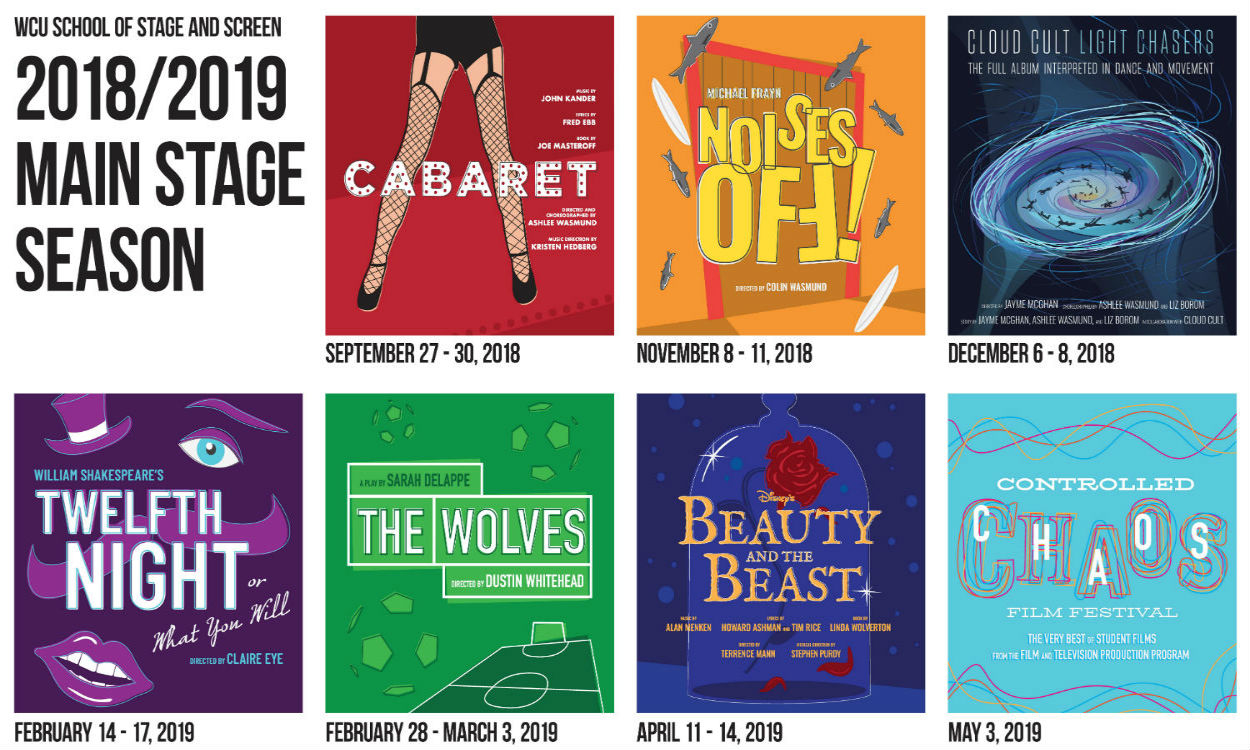 Students in The School of Stage and Screen have the opportunity to participate in a diversity of productions, whether behind the scenes, on the script, behind the camera or on the stage.

The School of Stage and Screen at Western Carolina University is thrilled to announce our 2018/2019 Mainstage Season which features an array of musical theatre classics, a laugh-out-loud farce, a beloved Shakespearean comedy, an important new work, our annual film festival, and a first-of-its-kind interpretive dance/movement show set to a concept album from a major art-rock band.

The Stage and Screen season opens with the surprisingly timely musical, Cabaret.  Berlin, 1931.  Set in the seedy nightlife of the Kit Kat club, a young American writer becomes infatuated with an English cabaret performer in the midst of the Nazi party rising to power.  This hit musical, featuring such beloved numbers as Willkommen and Don’t Tell Mama, has delighted audiences for over fifty years and serves as a continued warning of the very real dangers of totalitarianism.  Recommended for 13 years and up. Directed and choreographed by Dance and Musical Theatre Program Coordinator, Ashlee Wasmund with Musical Direction by faculty member, Kristen Hedberg.  Cabaret will run from September 27th-30th in the University Auditorium.

Next up is an hysterical ode to the theatre itself in the much-loved farce, Noises Off.  Taking a fond and farcical look at the follies of live performance, where egos, backdoor accords, and passionate affairs put each show on the brink of potential disaster, Noises Off is an homage to the art of theatre itself.  This hysterically funny play within a play is told in three acts: dress rehearsal, the opening performance, and a performance at the end of a disastrous run of a production bound for Broadway, where the tension amongst actors and crew boils over in a slapstick barrage sure to delight all audiences. Recommended for 13 years and up. Directed by faculty member, Colin Wasmund, and will run from November 8-11 in the University Auditorium.

The Fall semester closes with a one-of-a-kind interpretive dance piece set to the beloved rock band, Cloud Cult’s, 2010 concept album, Light Chasers.  We’re born, we grow together, we triumph, we lose, we fall apart, we mourn, we resolve, and then we depart.  This is our collective journey.  But is there more?  This singularly unique production tells the story of one couple’s life together, from childhood to marriage, sorrow and reconciliation, and ultimately to departure, told through dance, movement, lights, and imagery, this beautiful and affirming piece finds joy in loss.  Produced with permission and in partnership with Cloud Cult.  Recommended for all ages. Light Chasers will be directed by Jayme McGhan, Director of the School of Stage and Screen, with Choreography by Ashlee Wasmund and faculty member, Liz Borom and will run from December 6th-8th in the University Auditorium.

The Spring semester opens with Shakespeare’s most celebrated comedy, Twelfth Night, a tale of spurned love, mistaken identities, and mischievous pranks.  When Viola and her brother, Sebastian, are ship-wrecked and separated off the coast of Ilyria, Viola conceals herself as a man named Cesario in order to protect herself and gain favor with Duke Orsino, the ruler of Ilyria.  Orsino takes a quick liking to “Cesario” and sends “him” to court the hand of the beautiful Olivia who is in mourning for the death of her father and brother.  But what happens when Olivia takes a fancy for “Cesario” instead?  This charmingly funny Shakespearean comedy has left audiences delighted for over four-hundred years.  Recommended for all ages. Directed by Theatre Program Director, Claire Eye.  Twelfth Night will run from February 14-17th in the University Auditorium.

Next is the Pulitzer-Prize finalist new play, The Wolves, a slice-of-life play that centers around the raw adolescence of a teenage girl’s soccer team.  As the team gears up for the season, practicing in their indoor facility, the pack of female warriors take physical and personal shots for and against one another with more than just a soccer ball; exploring what it means to be a young woman in today’s world, and forging a camaraderie that will last long after the game is over.  Recommended for 16 years and up. Directed by faculty member, Dustin Whitehead.  The Wolves will run from February 28th-March 3rd in the Josephina Niggli Studio Theatre in the Bardo Arts Center.

Disney's Beauty and the Beast

Completing the theatre season is the sweeping Disney’s Beauty and the Beast. Come be our guest and join us for a beloved tale that’s as old as time.  A young, provincial French woman, Belle, longs for something more than her little country town.  When she stumbles upon an old castle, she meets Beast, who is really a young prince trapped under the spell of an enchantress.  If the Beast can learn to love and be loved, the curse will end and he will be transformed in to his former self.  But if he does not learn his lesson soon, the curse will become permanent, dooming him and his household for all of eternity.  Terrence Mann, who originated the role of Beast on Broadway, will direct this beloved musical.  Recommended for all ages. Beauty and the Beast will run from April 11th-14th in the Performance Hall in the Bardo Arts Center, with special matinees for area schools scheduled.

Rounding out the 2018/2019 Stage and Screen season is the most exciting single night of the academic year, the Controlled Chaos Film Festival, a celebration of numerous narrative and documentary films created by the students in the Film and Television Production program.  Controlled Chaos will be held on May 3rd in the Performance Hall at the Bardo Arts Center.

This is an H2 Header

This is an H2 Header