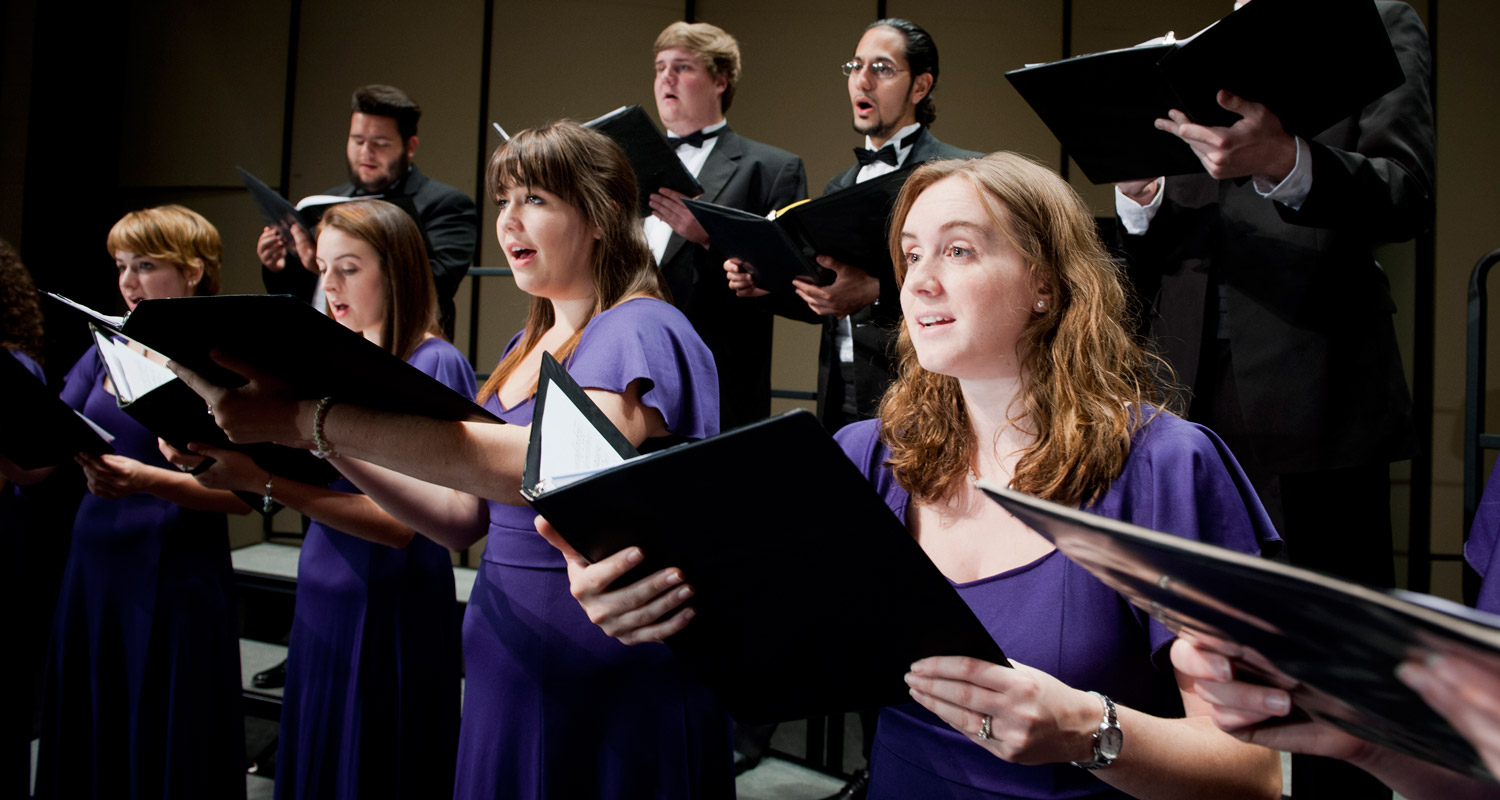 The vocal and choral music program at Western Carolina University offers students a wide array of opportunities, ranging from solo performances in recital, opera, and musical theater, to participation in many distinctive choral ensembles. Students may also take commercial voice lessons. Whether your musical interests lie in classical, Broadway, jazz, opera, or gospel, WCU has something to offer you.

Music majors whose performing area is vocal may select from the following degree programs:

The WCU Concert Choir is an auditioned mixed ensemble of 40 to 50 voices. Most are music majors, but auditions are open to all WCU students regardless of major.  They sing a widely varied repertoire of music from the Renaissance to the present, including performances of choral masterworks with full orchestra such as Handel's Messiah, Poulenc's Gloria and Vaughan Williams' A Sea Symphony.

In addition to on-campus performances, the Concert Choir and Early Music Ensemble tour annually during the fall semester and sing other concerts in the region.

Auditions are held during the first three days of each semester.  Sign up for an audition time on the sheet posted outside Dr. Allison Thorp's office, CO 465.

The University Chorus is open to all students without audition. They rehearse and perform a wide variety of musical styles including folk music, show tunes, sacred classics, popular music and spirituals. This group includes music students and those studying other fields. The University Chorus is a good opportunity for instrumental music majors to continue to develop their vocal skills.

Auditions are held during the first three days of each semester.  Sign up for an audition time on the sheet posted outside Dr. Allison Thorp's office, CO 465.

The Catamount Singers is a small commercial voice ensemble (by audition only) directed by Dr. Tiffany Renée Jackson that represents the pride, spirit, and soul of the WCU community. The group is comprised of confident and well-rounded singing artists, who are song writers, instrumentalists, and future educators.  The members are given a space for artistic growth to accommodate an ever-changing world. In doing so, each singer will represent themselves as individual artists with unique talents, which they are expected to share for the betterment of the whole. We are individuals, we are community, and we stand for excellence. Michael Yannette is the pianist for the Catamount Singers.

WCU’s Musical Theatre Program is jointly administered by the School of Music and the School of Stage & Screen. The musical theatre program provides students with a strong foundation in the performance and technical aspects of musical theatre and with the tools needed for a professional career or graduate study.

The Western Carolina Community Chorus is composed of singers from the westernmost counties of the state. The organization is the oldest continuously active community chorus in western North Carolina. Western Carolina University has sponsored the organization since its inception in 1970, and the Jackson County Arts Council and the North Carolina Arts Council have also provided significant funding and other forms of support for many years.

The chorus has performed a wide variety of choral literature, including major works of composers ranging from Bach and Vivaldi to Prokofiev and Orff. The group complements its repertory of masterworks by programming Christmas carols and part songs, choruses from oratorios, extended works of significant contemporary composers, medleys of music from Tin Pan Alley and the Broadway stage, and representative selections of seasonal, patriotic, traditional and folk music.

Membership is open to singers with past experience in community, school and church choirs. No audition is required for acceptance in the group, but regular attendance at the Sunday afternoon rehearsals is essential. Additional information may be obtained by calling the director, Dr. Robert Holquist, at (828) 293-3270.

There are additional opportunities for vocal and choral students to perform with vocal ensembles, including the Inspirational Choir and Opera Scenes.

Apply to the School of Music