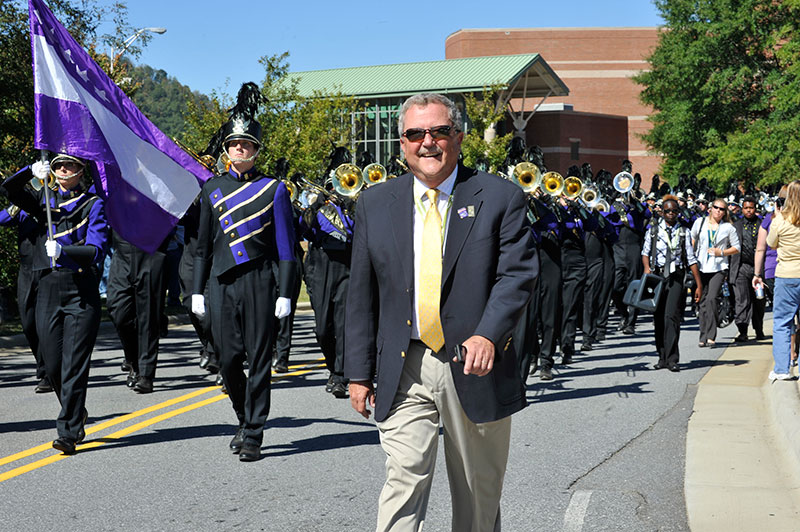 Bob Buckner served as the Director of Athletic Bands for 20 years, growing the award-winning marching band from 90 members to over 400. Help continue the excellence that Bob Buckner has established in the Pride of the Mountains Marching Band.

Give to the Bob Buckner Endowment

The Pride of the Mountains Marching Band is one of the most visible demonstrations of the excellence for which Western Carolina University stands.  From winning the Sudler Trophy – the Heisman Trophy for marching bands – to appearances in such venues as the Rose Bowl Parade and the September 2011 Carolina Panthers/Green Bay Packers NFL game halftime show, the Pride brings consistent national recognition to Western.

This WCU point of “pride” did not just come into being of its own accord; rather, it was created and developed by a director of remarkable and unique ability.  The Pride is indeed the band that Buckner built.

I am excited to participate in launching the Bob Buckner Pride of the Mountains Marching Band Endowment campaign, an initiative designed both to salute Bob Buckner and his legacy and to ensure the future of the Pride.  Of course, WCU provides fiscal support for the basic operations of its marching band.  But we at Western envision even higher levels of achievement and even greater opportunities for the Pride – all built on the foundation Bob laid.  We envision an endowment which will generate funding for the “extras” which will distinguish the Pride even further but which the university simply cannot provide in these challenging financial times – funding which will support, for example, out-of-state marching band scholarships to attract the nation’s top marching band students to WCU; consistent appearances on national and international stages; and the purchase of increasingly sophisticated equipment necessary for cutting-edge performances.

The Buckner Endowment will enable us, not just to sustain, but to enhance and grow the Buckner legacy.  Imagine the difference we could make if every student Bob directed in his career – both at Western and at Sylva-Webster High School – not to mention the parents of those students and Bob’s many other friends and colleagues, made a minimum 5-year pledge of $1000 ($200/year; $16.66/month).

Will you join Susan and me as together we…

SALUTE THE LEGEND FOR THE FUTURE OF THE PRIDE?

To make your pledge or contribution, make your online gift now, or contact Meg White at 828-227-3343 or mawhite@wcu.edu.

Please dig deep to give your PROUDEST gift for the sake of the PRIDE.

It is with great honor and responsibility that I endorse the Bob Buckner Endowment Fund created for supporting the future of The Pride of the Mountains Marching Band. As many directors, former and current students are aware, Mr. Bob Buckner was an integral part of creating the legacy and notoriety that we at Western Carolina University enjoy as our marching band. The reputation, exciting show designs and attraction of students throughout the United States to our band program can be attributed to the work and commitment of Bob.

When the idea of creating this endowment was proposed by Dr. David Belcher, Chancellor of WCU, I immediately accepted the charge and embraced the opportunity to assist students in need of financial assistance. My long-term goal is to offer the Pride of the Mountains experience to students both in and out of state, while not excluding students who qualify by audition, but cannot afford to attend WCU. This initiative sets in motion new possibilities for students throughout the United States to share with WCU their musical talents while accepting a financial offering from a fund whose name brands the history of our marching band program.

Why should a university marching band program worthy of receiving a national award, such as The John Philip Sousa Sudler Trophy, exclude America’s most talented musicians?  Many times, these questions can be answered in terms of dollars and cents. With the formation of the Bob Buckner Endowment Fund, we can now offer those students in need and deserving of membership based on talent, the opportunity to become one of The Pride. For those of us fortunate enough to know Bob, his philosophy is based on inclusion and the experiences a student receives in marching band, well past the musical benefits. This endowment will make this possible for students across the nation with your support and generosity.

As the legacy of Bob Buckner continues under my leadership, I urge you to donate to this fund knowing that in his 20 years as Director of Athletic Bands, Bob created memories and opportunities for hundreds of students. As Bob’s friend and successor, I pledge to you the same kind of experiences for future WCU students.
Quite simply said…Bob’s dream became reality…My vision is focused on continued growth and excellence…OUR partnership can insure the future, while honoring the past with greatest respect for the man who led the journey.

I look forward to a very lucrative campaign! 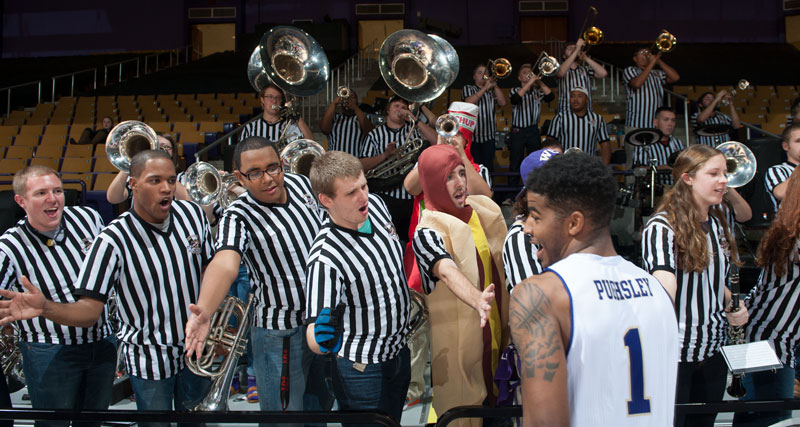 Help support our Tournament of Champions band contest by advertising in our program. Reach over 12,000 people in attendance on event day!

Advertise in the Program Book