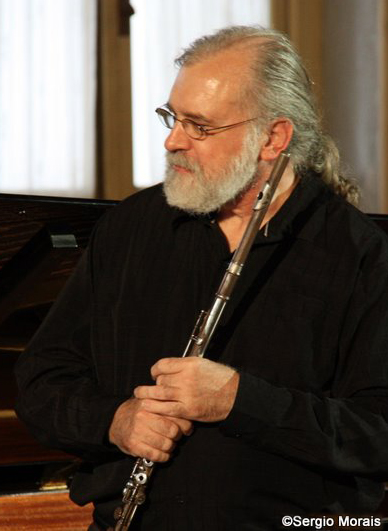 Dr. Eldred Spell is professor of flute at Western Carolina University and was, for many years, principal flute of the Sewanee Summer Music Center. A popular recitalist and clinician, he has appeared throughout the United States, Canada, and England. Dr. Spell has recorded for the CRS, Early Light, and Sonus record labels and many editions of his music are available through ALRY Publications.

Dr. Spell has been a member of the Board of Directors of the National Flute Association and the Performance Health Care Committee, and is an editorial adviser for the Flutist's Quarterly. He maintains a substantial collection of historic flutes and performs primarily on a nineteenth-century instrument by famed French maker Louis Lot (the flutist’s equivalent of a Stradivarius violin).

Also trained as a flutemaker, Dr. Spell has done considerable research into the practical acoustics and tuning of the flute and has been a consultant to numerous flute companies. As a sideline, he makes piccolo headjoints which may be heard in a number of major orchestras.

As a teacher, Dr. Spell offers a unique blend of personal warmth and musical expression, combined with a thorough knowledge of historical styles and the practical mechanics of flute playing.