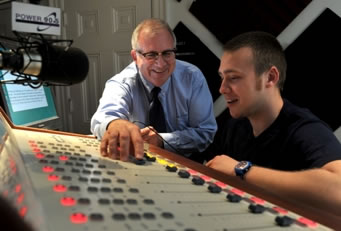 From electronic classrooms and computer labs to television and radio studios, WCU offers you the very best in academic, professional, and performance facilities and technology, including a new HD TV studio in WCU’s Center for Applied Technology and the region’s only FM radio station. Whether it be for class or for after hour use, students have access to Killian 219. This classroom/lab offers 32 workstations equipped with writing, audio and video editing software, including the full Adobe suite of software. Read on and learn more.

Inside Western Carolina University's Center for Applied Technology is a high-quality production/post production broadcast television facility. "To match what's in this building," says professor Don Connelly, "you'll have to go to a large market like Charlotte, Raleigh, or the Asheville, Greenville/Spartanburg market."

Connelly says, "The facility is all about the students. The key design element of the broadcast television studio was to offer students an outstanding professional learning experience. We want students to be able to transition smoothly into their professional careers when they leave Western Carolina. As a result, Western Carolina has students with broader skill sets entering the industry at a higher level than students typically do. I am proud that recent students have found their first jobs in television with companies like Turner Broadcasting, NBC Sports, Time Warner, NASCAR, and local network affiliate television stations."

Students are in a "hands on" learning environment.  "Its really important for students to connect with the studio and get the feel of the learning space from the very first day they set foot in class," says assistant professor James Machado.   "This is an incredible place for a student to start a broadcast career.  The studio is set up to do everything from an in studio production to field work."

The multimillion-dollar studio was designed by SONY Television Integration Systems and is maintained by SONY.  Spring 2017 the studio underwent a complete HD television upgrade.  The main control room was designed to also be a classroom and is where students in the various television production classes meet. In addition to the main studio and control room, there is a video edit suite, central record/playback capture suite, and the equipment room where all of the computer servers that support the digital facility are located.

In addition to all of the typical broadcast studio equipment, the facility is equipped with fiber-optic links to the E.J. Whitmire Football Stadium and the Fine and Performing Arts Center. The studio has a remote video switcher, fiber-optic camera packs, and a wireless camera pack for the production of live or recorded sports and theatrical events. Additionally, the facility has the necessary equipment to go anywhere on campus and broadcast on the university's cable television system.