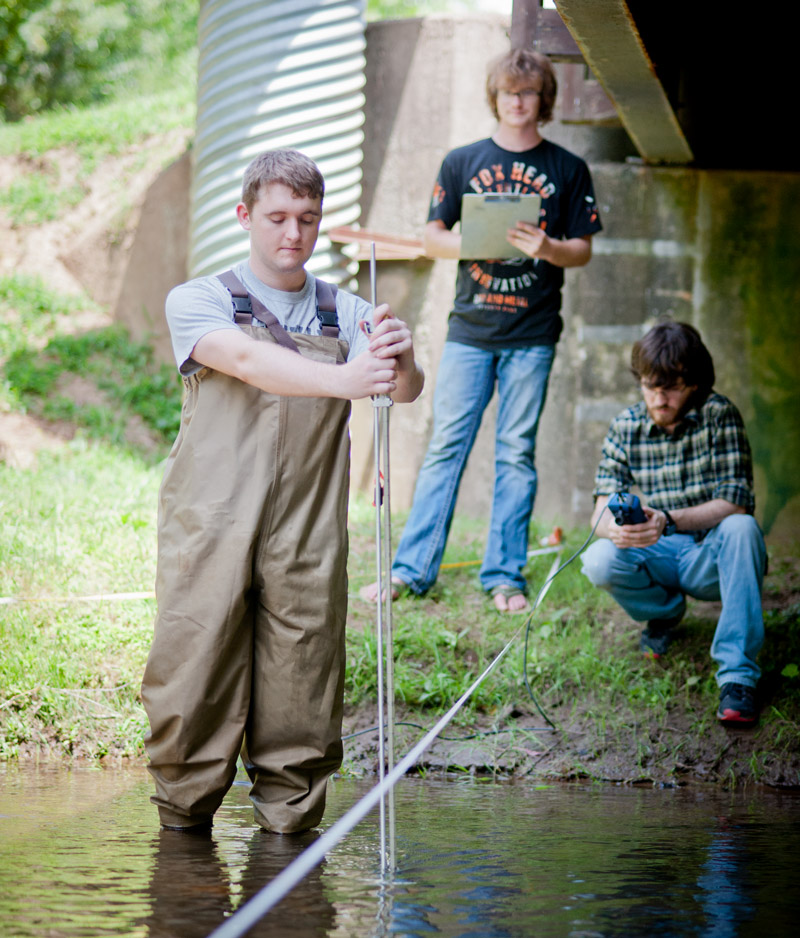 The Cullowhee Creek Environmental Field Station (CCEFS) is an on-campus site developed to facilitate an investigative and interdisciplinary approach to learning in introductory through advanced level classes in the geology and physics programs. The project goals are to

(1) enhance student involvement in investigative experiences at all academic levels;
(2) increase student involvement in quantitative data collection and analysis using industry standard tools and equipment;
(3) enhance student awareness of the interdisciplinary nature of learning through integrated projects, courses, and collaboration;
(4) emphasize connections between theory and application, linking to the existing knowledge base of students and using the local environment and their relationship to it as a point of reference; and
(5) develop a well studied, on-campus site from which to evaluate regional environmental problems.

The CCEFS consists of fixed-position hydrologic stations, and portable geophysical and hydrologic equipment to study the site. The equipment permits students to measure, monitor, and characterize the environmental systems on campus. Tools and approaches used in characterizing the field station are also used to address questions outside the Cullowhee Creek watershed, particularly in upper level classes and independent research projects.

The WCU campus is located in the lower reaches of the Cullowhee Creek watershed in the headwaters region of the Tennessee River basin. The creek flows through campus for about 1.5 km (Figure 1). As part of the Blue Ridge physiographic province, mountainous terrain dominates the Cullowhee Creek watershed (62 km²), with the elevation ranging from 628m at its mouth to just over 1400m along the highest divides. The climate is humid subtropical and the annual precipitation varies from 127 cm at WCU to 178 cm in the headwaters.

Development in the watershed is generally sparse with the most intensive land use, including WCU, in the lower elevation, flatter part of the basin. Excess sedimentation is considered the largest environmental threat to aquatic systems in the region. Bedrock exposures on campus, mostly the product of human activity, include Late Proterozoic biotite gneiss, schist, and a minor amount of amphibolite. Alluvium, artificial fill, colluvium, and saprolite dominate the sediments observed on campus. Red, clay-rich Ultisols are developed in saprolite on most slopes on the WCU campus whereas loamy Inceptisols make up the floodplain of Cullowhee Creek.

Cullowhee Creek flows north through Jackson County in the southwestern portion of North Carolina. It is a significant water resource for the county. Cullowhee Creek flows into the Tuckasegee River, which flows into the Tennessee River and finally the Mississippi River before entering the Gulf of Mexico. The watershed runs through the campus of Western Carolina University. The creek is regarded as a major educational feature of the campus and provides an excellent opportunity for research with maximum student involvement. The main tributaries are Tilley Creek and Long Branch. The watershed, including its sub-watershed, covers 15,062 acres or 23.53 mi² of steep, mountainous terrain.

Elevations in the watershed range from ˜ 4600' to ˜ 2080' on the floodplains. Slopes near the headwaters of Cullowhee Creek can reach over 30% and along the stream valleys they average less than 8%.

The climate is humid subtropical with mild summers and cold winters. The average temperature for the year within the watershed if 55.6 °F. Annual precipitation in the basin varies between 1270mm at WCU to 1780mm in the headwaters. As one would expect, precipitation generally increases with elevation. Precipitation in the warm seasons is a combination of convectional (including thunderstorms) and frontal, whereas in the cold season nearly all precipitation is frontal. Although precipitation is well distributed throughout the year, minor peaks occur in late fall to early winter and in the spring. Snowfall averages 25cm in the lower valleys to 75cm in the headwaters.

The Cullowhee Creek watershed lies within the eastern Blue Ridge Province, which is delineated in the east by the Hayesville Fault and in the west by the Brevard Fault Zone. This region has been shaped to varying degrees by three separate orogenic events: the Taconic, Acadian, and Alleghanian. The rocks of the watershed consist largely of metamorphic gneisses and schists. It is not uncommon to find some metagraywackes scattered about. Aluminosilicates are quite common and there is some evidence of migmatitic rocks. The dominant minerals in this location are quartz, feldspar, muscovite, biotite, and garnet. The soils range from deep to moderately deep well-drained soils to sand, gravel, and cobbles in the floodplains. Saprolite is common in the low-lying portions of the basin.

Though exact dates are not known, evidence for Native American occupation in the southern Appalachians could go back as far as 12,000 years. The Cherokee have left a lasting impact in this area, which is evident in some of the place names that they have given. Cullowhee was named for an edible plant that they gathered during the spring. The Cherokee settled in locations all along the Tuckaseegee River and its major tributaries. It has been estimated that the Cherokee culture in this area predates other settlers by approximately 500 years.

Land Use Past and Present